If you’ve heard of Flor de Gonzalez, it’s likely because you’ve heard of the company’s most well-known line, 90 Miles. That cigar gets is name from the short distance between the southernmost point in Florida and the island of Cuba, an area that is home to many families in the cigar industry, including the company’s founder, Arnaldo Gonzales, who immigrated to the U.S. in 1980 and started Flor de Gonzales in 1993.

But the company has more than just the 90 Miles, as its website lists eight different lines that come in a number of different sizes, including the 15 Aniversario, Gold Series, Gonzalez Series, The Q-Ban Fuerte and Habanique, to name a few. Additionally, FDG has recently expanded its offerings, as in mid-July it announced the upcoming release of a new cigar that had ten years of age on it, a three-vitola line called Spectral.

The cigar, which brings what the company calls a “new and edgy” look to its offerings, uses tobacco that had been aged for five years at the time of its rolling, and since then has been resting for five years in cedar wraps. Yadi Gonzalez Vargas said that Spectral is “a celebration of flavors, complexity and color.”

Spectral gets its inspiration from José Martí, the influential Cuban writer, philosopher and political theorist. In particular, it draws from his poem “I Have a White Rose to Tend,” which Gonzalez told halfwheel was significant because of “the white rose symbolizing the diversity of mankind and its synergy, peace, unity and good will to all men.” The cigar was formally unveiled at the 2014 IPCPR Convention and Trade Show in July, and is slated for an August 15 release in three sizes, the 5 1/2 x 44 Atom, 5 x 60 Cation and 6 x 50 Proton, with MSRPs between $8.50 to $8.90. As noted in the announcement, Gonzalez said that the names represent the positive charges that make up a core and are brought upon by anyone who smokes this cigar. “An atom, like the world, is surrounded by negative energy; but look deep enough and you can find the positive anywhere, even in something as small as an atom. We smokers are a positive force in many ways: we always come together, share, help and with positive emphasis we try to prove a point to our government about our premium cigars!”

While the initial batch will be limited to 3,000 boxes of 21 cigars spread across the three sizes, Gonzalez said another batch is currently resting for a future release, though a date for that has yet to be set. The Flor de Gonzalez Spectral offers an interesting mesh of aesthetics, as the traditional cedar sleeve gets bordered by the shiny silver black ribbon at the foot and the somewhat futuristic band, albeit in a sort of retro-futurism look with an almost art deco font topping off the look. The downside to this presentation is that you can’t see much of the cigar, minus the somewhat more than an inch that is visible above the band. Once the cedar sleeve and band are removed, you see a fairly dark brown and somewhat mottled wrapper with a decent number of veins, some oily shine and varied amounts of tooth. It feels like a well-rolled cigar, uniform with a good bit of firmness but stopping short of feeling hard or without give. The pre-light aroma offers familiar notes of slightly damp tree bark, a touch of espresso and higher-cacao content chocolate, with no spice or pepper to speak of in the nose. The cold draw is fairly dialed in with a touch of resistance in two of the cigars and just a touch too little in the third. The flavors here are on the milder side with no real pepper or spice to speak of, instead faint wood and leather notes fight for attention.

The first few puffs of the Spectral from Flor de Gonzalez don’t quite jump out aggressively, but rather it seems the aged tobacco and rested cigars allow for an easier start, with touches of pepper complementing the notes of tree bark and chocolate in the early goings. An early retrohale shows predominantly white pepper, offered in an amount that will fill but not overpower the nose and gives a good wake-up to the senses that helps pick up the rest of the flavors and aromas the cigar offers. There is a point in the first third where the Spectral begins delivering some incredibly familiar notes that take me back to my grandmother’s house: meatloaf in the oven hits both the nose and palate, while a touch of old wooden floors with a touch of funk from an area known for getting lots of rainfall comes out through the aroma, capped off by a touch of white pepper in the retrohale that also has some of that funkiness. It’s so embracing that I almost have to mentally snap myself back to my deck that has been baking in the hot August sun of Phoenix—quite an amazing few puffs to say the least. Not all the rough edges are rounded out perfectly in the first third, but that doesn’t stop the cigar from offering a very good beginning. The first third of the Spectral has performed very well, with a burn line that has stayed sharp and even, plenty of smoke and no touch-ups or relights required. My only gripe is with the ash, which stays on for good lengths but with a deceptively weak grip, falling off without warning. 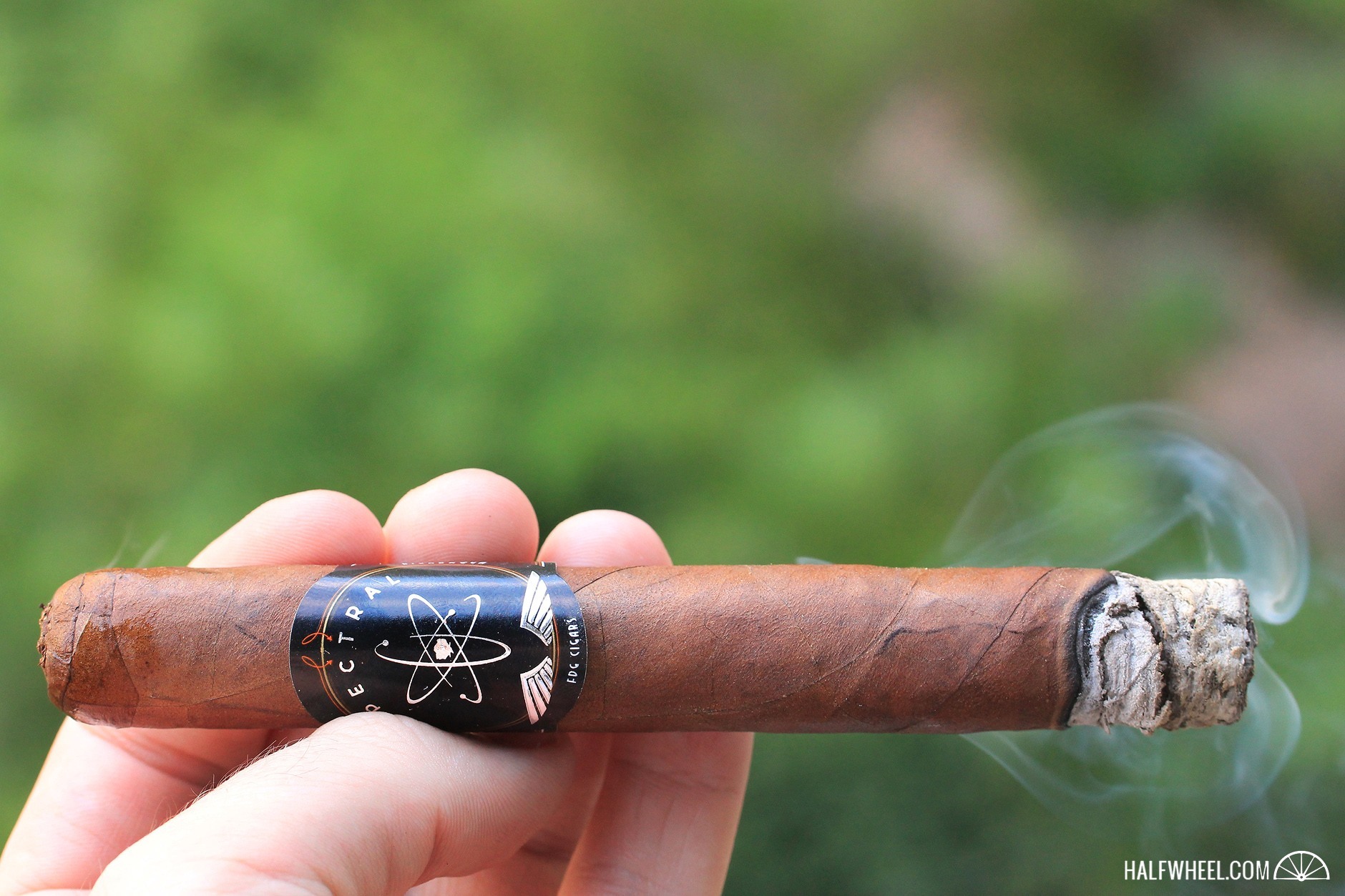 There’s a bit of an uptick in pepper at the start of the second third, as the Spectral shifts towards a more black pepper profile while preserving the same undertones offered in the first third. The chocolate component seems to be the most varied from cigar to cigar, but when it is in abundance it provides a great counterbalance to the increasing notes of tree bark and the growing earth flavor. Besides the sweetness from the chocolate, which stays toward the higher-cacao content variety, there’s also a touch of thick root beer sweetness in the background that seems begging for the senses to find it. The damp tree bark has started to evolve a bit and picks up more of a cherry wood note, though there’s also a decent amount of cedar in the equation, which shouldn’t come as a surprise given the way the cigar is packaged. Just in front of the halfway point, there’s a touch of sourness that starts to come out and one that again varies from sample to sample. What seems to be most noticeable in affecting the flavor at this juncture is simply too much of the cedar taste. Some of the cigars smoked showed hardly any at all, while one in particular seemed to heap it on with adverse consequences. But when the cedar stays in balance, it gives off both an enjoyable flavor and aroma that shows the best of what Spectral has to offer. It’s hard to say there is a distinct transition to the final third; rather the cigar seems to slowly shift the mix of flavors, returning the wood note to the somewhat juicier and damper flavor of tree bark that was found earlier, while the pepper seems to have retreated a bit and now leaves a lingering tingle on the palate as opposed to an upfront greeting. The cigar doesn’t quite return to the levels of complexity found in the first third, but the note of meatloaf in the oven can still be picked out, an interesting note that seems more geared towards stimulating the memory rather than the palate, though don’t take that as a knock on it. The burn line remains even, the ash is still a bit loose to be totally trustworthy, and only one relight has been needed to give the Spectral a bit of a push towards its conclusion. As long as you moderate your puffing speed, the finish is clean and enjoyable, offering a bit of a ramp up in strength and pepper, tying the bulk of the flavors found up to this point back together for an enjoyable ending. My biggest concern with the Spectral is the bit of inconsistency found in the third cigar smoked, which had a much darker and toothier wrapper than the other smoked for this review, and as such seemed to keep the cigar from achieving the same levels of balance and complexity that had me feeling fairly impressed after the first two. It's hard to tell exactly how much of an effect the aging has had on the cigar, but it is noticeable, smoothing out many of the flavors and giving them an opportunity to marry together beautifully at points. Spectral is an interesting project from Flor de Gonzales that is certainly worth trying and could be one that helps bring a bit more attention to the company's other offerings.