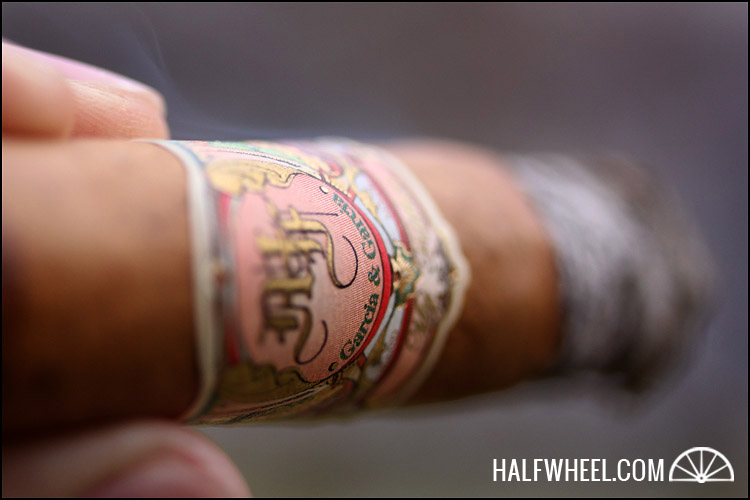 A few weeks ago we broke the news on Federal Cigar’s 91st anniversary cigar, the My Father Le Bijou 1922 Cervantes. Back then, Rick Gadway thought that the cigars would be arriving to New Hampshire on February 1st. Turns out, they showed up a day early, but nonetheless, the cigars are in stock.

Rather than rewriting history, here’s what I published back on January 17th: The first thing that strikes you is the bold lettering that has been stamped (or pressed?) onto the cedar. Like most cedar-wrapped cigars, between the band and the cedar there’s really no way to get an idea of what the My Father Le Bijou 1922 Federal Cigar 91st Cervantes looks like until you take the cedar off. What’s underneath is that stunning thick glowing mustard Connecticut wrapper that was featured on the special version of the Jaime Garcia Reserva Especial Limited Edition 2011. There’s a great musky barnyard and aged leather aroma underneath the cedar; it’s medium-full and totally not Connecticut. The foot smells more like a regular My Father and nearly identical to the Maduro version: sweet cherries, cocoa and earth, somewhere at medium-full. Oddly, the cold draw tastes almost identical to how the foot smells: a bit less berries, but they are still there with the cocoa, earth and a bit more sour notes. The My Father Federal 91st actually takes a bit to get going, but after a bit slower toasting ritual there’s a thick toastiness in the air as the beautiful Ecuadorian Connecticut begins to burn.

It begins the first third with a heavy cedar nut followed by bitter nuts, which hang around briefly before they overtaken by a harsh cedar. A touch of sweet nuts returns before a black pepper develops from the center of the tongue backwards. To a bit of disappointment, the fight between the nuts and cedar aren’t the dominant force of the first third. Instead, a barrage of García black pepper dominates the cigar with some bitter cedar, fruits and tobacco joining as well. The retrohale is clean with some of the nuts and cocoa coming through, shockingly little pepper. There’s a bit of a deceiving strength to the Federal 91st in the first third, there’s an immense amount of body and the flavor is full, but the strength probably is somewhere slightly south of full. Overall, without a doubt, the strongest Connecticut profile I’ve had, dwarfing my memory of the 601 Black. Fortunately for the second third the My Father Federal 91st is a bit more interesting. The nuts and chocolate return underneath with a bit more Connecticut flavor up front while the black pepper doesn’t budge. Cedar plays a role in the finish, but it’s no where like what it is inevitably going to be after these spend times in the sleeves. Strength is still where it was in the first third and the Cervantes now has less of a shocking profile, although it’s still full. Unlike the first third, slowing down really makes a huge difference as it allows the complexities to come through.

The final third went the way I thought. It’s a great Connecticut flavor and a great end to the Cervantes. There’s a bit more of the complexity with a sweet brownie-like cocoa and bits of vanilla making making their presence known in addition to the Connecticut. The black pepper? It’s pretty much gone. There’s still some harshness on the Federal 91st, but the profile is still relatively clean. Even under an inch, the Cervantes manages to stay alive, which is saying something for a Connecticut. First and foremost, I currently prefer this to the Connecticut Broadleaf version. If the My Father Le Bijou 1922 Cervantes in the Ecuadorian wrapper stops aging, it's a good cigar with a profile that is just a bit odd to me. I highly doubt that is the case, which leads to point number two. Unlike the E.P. Carrillo Short Run 2010 No.4, where it was pretty easy to see how well this cigar was going to age, particularly given the Short Run 2010s, this is a bit of a guessing game. Given how the My Father Le Bijou 1922 Corona Gorda and Jaime Garcia Reserva Especial Limited Edition 2011 Connecticut are aging, this version of Federal Cigars' Cervantes is a rather interesting case. My gut tells me that while it might take a while, this has a real chance to age to be an absolutely sublime cigar. Regardless, right now this cigar is a peculiar journey that is in no way bad. If I lived in New Hampshire, I'd buy a box, smoke a few over the next month, smoke one every month or so and play it by ear, because in the end, I think they are worth it.