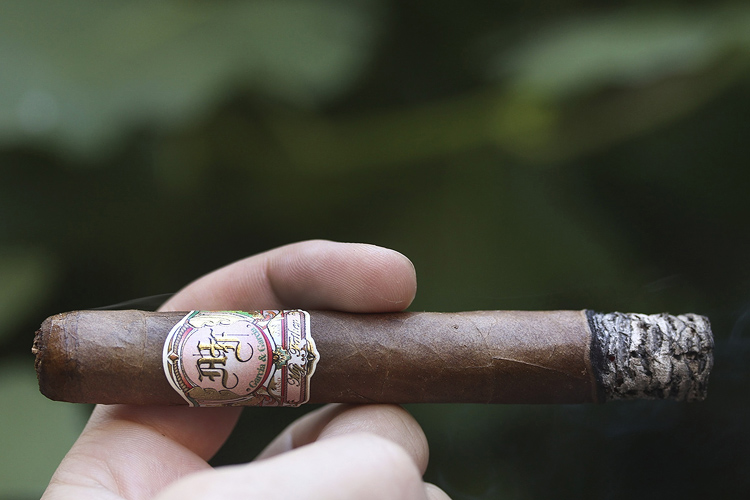 In honor of Father’s Day, Cigars International commissioned the García family to create a special version of its flagship My Father blend, a My Father Corona. After a bit of anticipation, the cigars finally made it through the shipping department at CI and have been on sale for a bit over a week. For those unfamiliar with the My Father blend, here’s how I described it when reviewing the Lancero last year:

It’s been told like this: Jaime (García) was working on a cigar by himself, his dad found out, Pepín tried a few, liked them, Jaime decided to name the cigar “My Father” and they were released. There are now seven My Father vitolas: No. 1, No. 2, No. 3, No. 4, No. 5, Cedros Cervantes and Cedros Eminentes. Three other releases (My Father 1922 Le Bijou, My Father Limited Edition 2010, My Father Limited Edition 2011) carry the same band, yet they are all different blends. There’s also the Baseball Bats and Cuban Pipes, but I’m unsure as to what blend they are based on.

The Corona is the eighth My Father blend, and the only one of the My Father proper that is limited. We broke the details back in April. 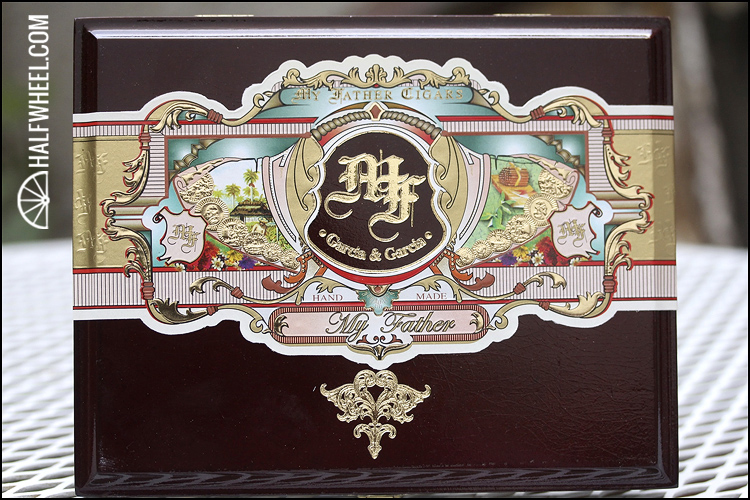 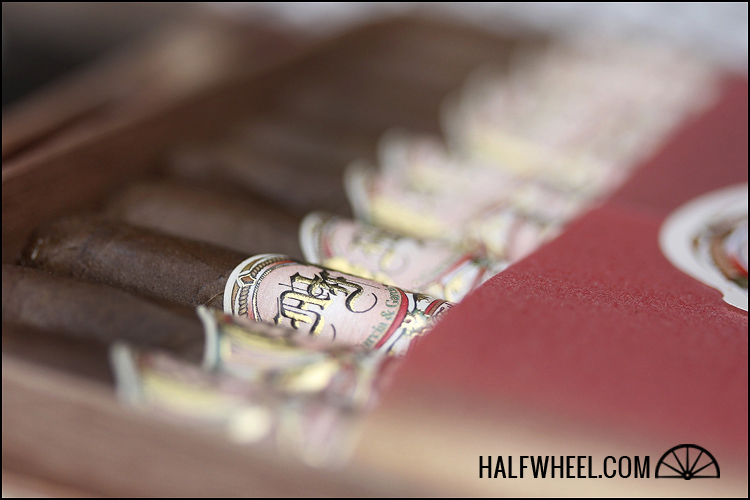 I’ve been around this block a few times before, the Ecuadorian wrapper has the great darker hue — a great solid chocolate. Veins are mild, roll is consistent and the triple caps are obviously present. Aroma off the My Father Corona is aged leather, a bit sour, but right around the medium-full range. From the foot, it’s the sweet cocoa and cedar-infused pepper mixture that is a signature. It has the sweet brownie cocoa I often find in a lot of Raíces Cubanas-produced cigars, but the My Father line has a much different pepper. Cold draw is similar, a bit more cocoa, a bit sweeter, some fruits and wine and very smooth at the medium-full to full range.

The first third begins with a great bouquet of aromas, including some great herbal notes, not really something I remember about most the My Fathers I’ve had. Flavor-wise, it begins with toastiness, cedar and pepper with the cedar lengthening itself out before a fruity note comes in at the finish. It’s medium-full and fairly complex. Smoke production increases as the first third progresses, which is good, because the My Father Corona starts on the light end. Like-wise, the flavor increases eventually settling with cedar, nuts, earthiness and black pepper. Notably absent: cocoa. 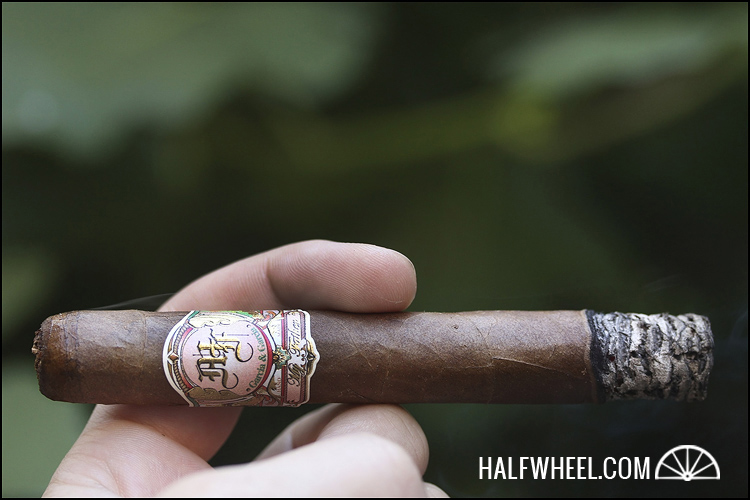 Into the second third and I’m beginning to wish the cigar would cool down just a tad. It’s only warm, but it seems there’s nothing I can do to get it to cool down. The cocoa returns to the My Father Corona along with added herbs, both of which join the first third flavors. Smoke production is now something to admire, while the draw remains right in the dead-center category. Ash continues to hold for about an inch, I can’t seem to make it last any longer, but it’s straight as can be. 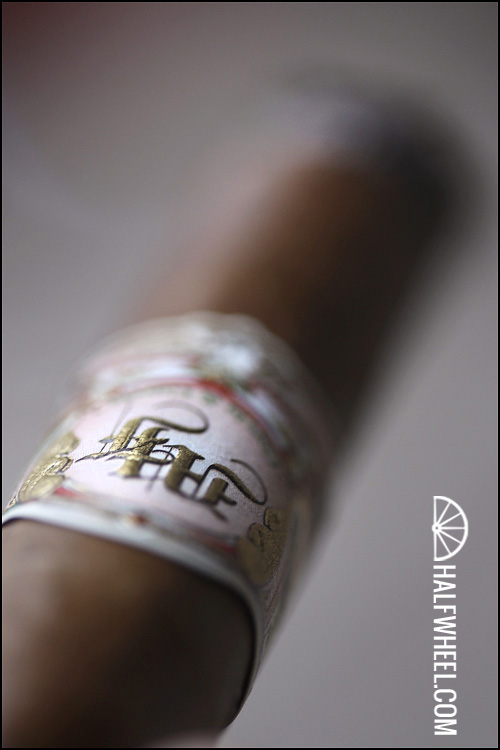 The final third presents a flavor profile that is continuing to develop; there’s a noticeable shift with the fruitiness adding itself and the toastiness increases, while a slight change to the cedar and cocoa both take place. Strength, which started in the medium-plus range is now at the top of the medium-full range, perhaps a bit artificially inflated by the extremely full-bodied nature, but the My Father Corona has a noticeable edge to it. Due to the temperature of the smoke, anything below an inch is probably not worth it, you can read below why I had to stop early on this particular example. 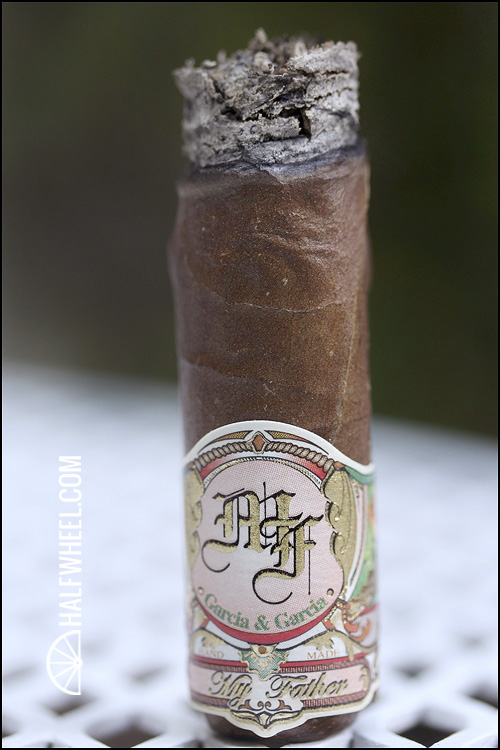 The My Father line is not known to be a monster seller. It's gotten the ratings, the blend is solid, the salesforce is good, but the price seems too high for most consumers. Smoke people might scoff at the idea of a six dollar Corona, that is also a half inch shorter than the traditional name suggests, but the Robusto starts at around $10.00 and is only a tad bit longer and a 52 as opposed to a 42. The reality is I don't think most consumers would have any trouble paying $60 a box for these, even if they are only going to last around 40 minutes. Why? Because not only is the price point a lot easier, but because the Corona is probably the best representation of the blend. For me, I still prefer the No.4, it's a benchmark Lancero for me, however, the cigar isn't really a true representation of the My Father blend, as it really is quite different from the No. 1, 2, 3 and 5. The Corona? It's like its older and larger siblings, just a bit fuller and a lot cheaper.