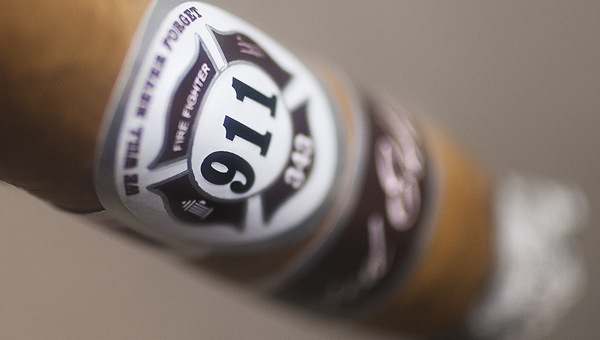 For the second year in a row, My Father and Casa de Montecristo in Chicago have teamed up to release a cigar to commemorate the September 11, 2001 attacks in New York City.

Last year’s release featured a single blend with two different wrappers: Habano Rosado and Oscuro. This year’s release features a tweaked version of the original blend and two different wrappers: Habano Maduro and Connecticut Ecuador. The filler and binders for both the 2011 and 2012 releases are exactly the same each year, with only the wrappers changing.

Last year Jeffrey Holst, a battalion chief here in Lombard Illinois, brought to us the idea of creating a special one of a kind cigar to commemorate the 343 fallen Fire Fighters of the 9/11 attacks.  Jaime Garcia, of My Father Cigar Company, graciously accepted the task of blending and creating this one of a kind cigar.  With only being given three weeks with which to produce this cigar, Jaime blended something truly  amazing and unique for this special purpose.  This year Jaime, Mike, and Sam have tweaked the blend to take this cigar to next level and create a truly amazing smoking experience that will appeal to every connoisseur’s taste. Considerable time and effort has gone into creating something truly special and worthy of commemorating such a worthwhile cause.

The boxes that the cigars are packaged in are equally as unique.   343 boxes have been created and are ready for sale in a just a few days.  They will be available in only one Vitola Toro (51/2 by 54) Each, both will contain 20 cigars; 9 with Connecticut Ecuador wrapper and 11 with Habano Maduro wrapper. Order your boxes today and help us support the families of the 343 fallen Fire Fighters “A portion of the proceeds will be donated to the family members of the fallen firefighters through a charitable foundation .

The boxes of the My Father Commemorative 911 Blend 343 Firefighter Limited Edition 2012, which include both wrappers, look like this: The My Father Commemorative 911 Blend 343 Firefighter Limited Edition 2012 Connecticut is a nice looking cigar with a slightly mottled yellow brown wrapper that is slick to the touch and has a bit of oil present. There are a few prominent  veins, but they are not overly distracting. The signature My Father triple cap is perfect and the cigar has just the right amount of give when squeezed. Aroma coming off the Ecuadorian wrapper is a combination of sweet cedar, hay, leather and a tiny amount of pepper. The cold draw is quite unique, with a combination of lemon, soap and hay notes.

The first third of the My Father Commemorative 911 Blend 343 Firefighter Limited Edition 2012 Connecticut starts off with strong flavors of hay, peanuts and creamy cedar. There is less sweetness and quite a bit more pepper on the retrohale than I was expecting and it stays at a pretty consistent level for the entire first third. There is just a bit of spice on the lips as well, but never enough to do more than mention. Smoke production is impressive and while the burn is excellent, the draw is looser than I would like. The ash is a bit flaky and a very light gray in color, but well-formed. The strength starts out on the low side of medium, and is slowly increasing by the end of the first third. Coming into the second third of the 911 Blend 343 Firefighter Limited Edition 2012 and the profile turns a bit sweeter and less creamier. Other flavors of nuts, hay, cedar, slight earth that come and go, and a vanilla-like sweetness . The burn remains excellent, draw has tightened up noticeably and the smoke production continues to impress. The strength is increasing, albeit slowly, and ends the second third at a solid medium, but I doubt it is going to go much higher than that. The final third of the My Father Commemorative 911 Blend Connecticut has much of the same profile as the second third with sweet nuts, cedar, earth and hay leading the way. However, both the vanilla note and the pepper on the retrohale have gotten a bit stronger. The construction continues to excel until the end of the cigar — and as expected — the strength remains at a solid medium. The Bottom Line: As mentioned above, the first version of these cigars released in 2011 were rushed to production and they tasted like it. While the originals have gotten slightly better after a year of rest, I honestly don’t think they will ever be anything more than a middle of the road cigar. Thankfully, both versions of the second release are quite a bit better in the flavors and profile department, with the Connecticut blend featuring a wonderful combination of cream, nuts, vanilla and stronger than expected white pepper on the retrohale. While not the most complex of blends, the construction was excellent and the flavors were rich and distinct. This is a very good release that I enjoyed quite a bit, but honestly, I liked the Maduro version substantially more. While there are some minor issues, both cigar blends are quite good, the cause is wonderful, and I applaud My Father and Casa de Montecristo for taking it on.