At 12:00 a.m. on Jan.1, 2014, Ezra Zion will release what is likely to be the first cigar of year. The word release is somewhat in question, as the cigars will be for sale via the Cigar Federation website and begin fulfilling orders to retailers, although none of the shipping will actually take place due to the holiday. Announced at the IPCPR show back in July, the Ezra Zion Honor Series FHK is the second release in the Honor Series, which commemorates specific people, with the first blend, the Honor Series Reagan, having been been released at the tail end of 2012.

We know it’s symbolic and somewhat tongue-in-cheek but we wanted to ring in the New Year by launching this project that’s been in the works for so long. It’ll be the first cigar in the world released in 2014. We had two goals with the FHK. We wanted to use unique tobaccos from several different countries and we wanted to leverage our buying position to offer a lower price-point than our other lines.

Co-owner Kyle Hoover expounds upon the idea behind the name FHK:

The name FHK stands for “Fathers of Hoover and Kelly”. Being history buffs we’ve researched our family heritage and were amazed at what we found: war heroes, ministers, statesman, and hardworking entrepreneurs. Chris had the idea to do a tribute to our forefathers who’ve made us who we are today. The idea seemed to click so we went with FHK as a cool way to pay homage to them.

The Ezra Zion will come in four vitolas at launch. They are:

The boxes that the Ezra Zion FHK come in use a similar cutout on the lid as their Honor Series Reagan, but the cut runs horizontal on the FHK instead of vertical as it is on the Reagan. They look like this: 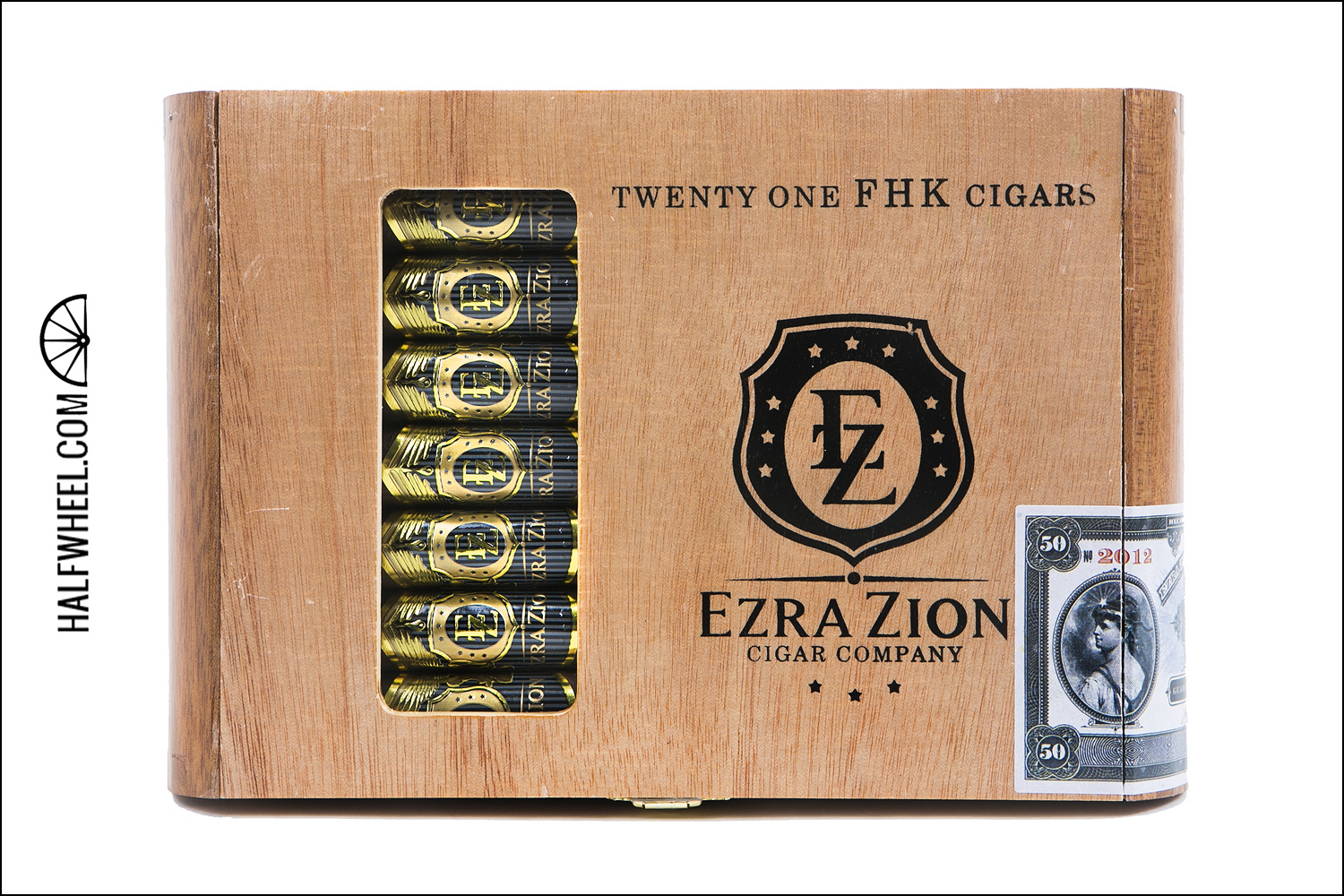 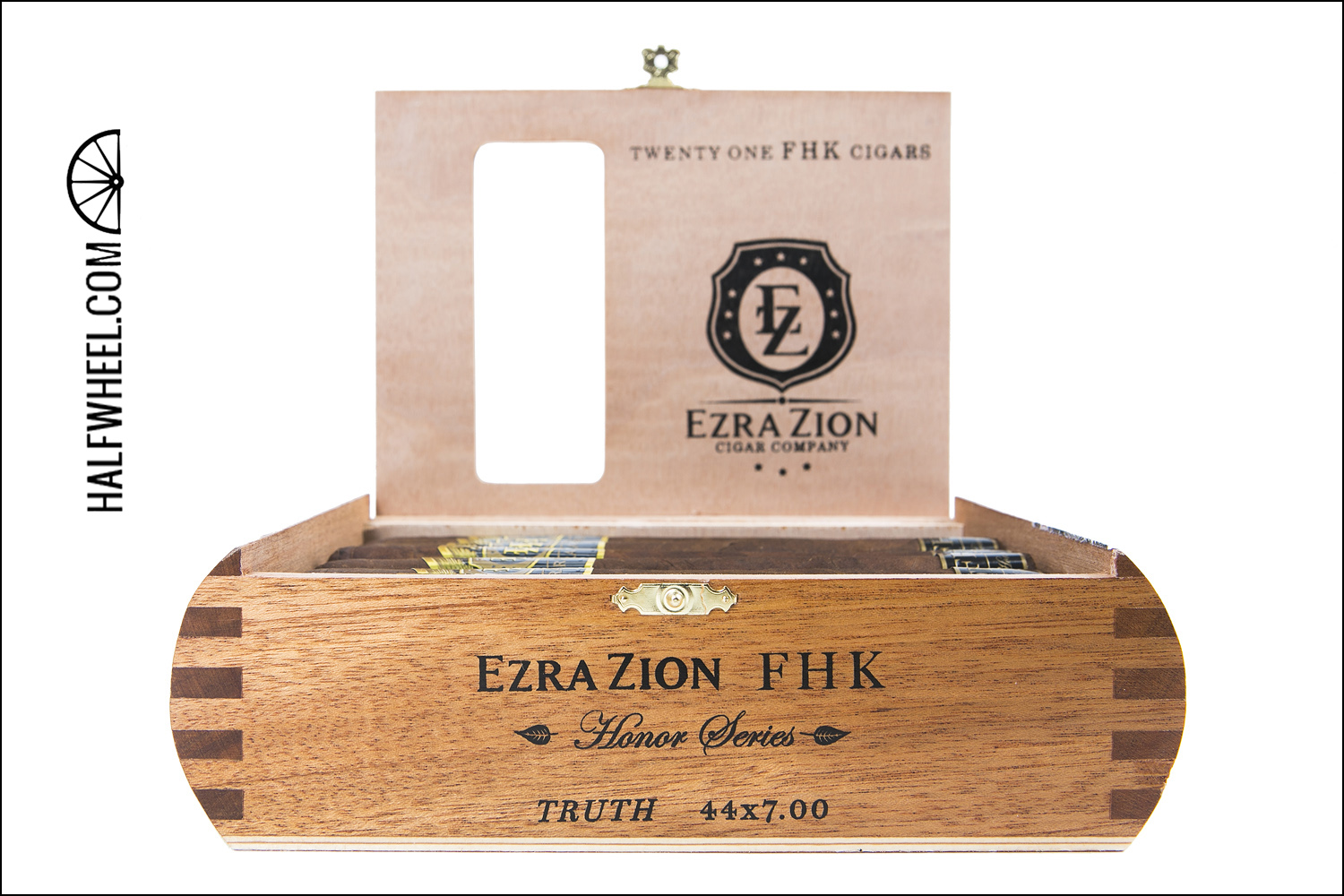 The Ezra Zion Honor Series FHK Truth is covered with a deep mocha brown colored wrapper that is toothy to the touch and contains a noticeable oily sheen. Its triple cap is gorgeous, and it is appropriately firm when squeezed with just a little give. Aroma coming off of the wrapper is a combination of strong barnyard, leather, espresso and oak, although I am noticing a little pepper as well on the nose.

It starts off with strong flavors of creamy oak, leather, cocoa powder, slightly bitter espresso and earth. There is a great biting black pepper on the retrohale from the start that seems to gain strength as the first third continues, and just the tiniest amount of spice present on my tongue. Construction-wise, the FHK has the perfect amount of resistance, and although the burn is just a little wavy, it’s not bad enough to really do more than notice off the cuff. Overall strength starts just a little below medium and does not really gain much steam by the second third, while the smoke production is quite copious so far. The beginning of the second third of the Ezra Zion Honor Series FHK Truth starts off with pretty much the same as the first third: flavors of leather, creamy oak, earth and cocoa powder along with a healthy amount of black pepper on the retrohale. However, right before the halfway point, everything changes. The spice on the tongue disappears totally, the black pepper increases noticeably and the profile shifts to more of an interesting bready popcorn note that combines well with a stronger dark chocolate flavor, while the other flavors have taken a back seat in terms of dominance. The burn and draw are both excellent at this point and smoke production remains to be well above average, but the strength has only increased slightly, and finishes the second third as a solid medium. 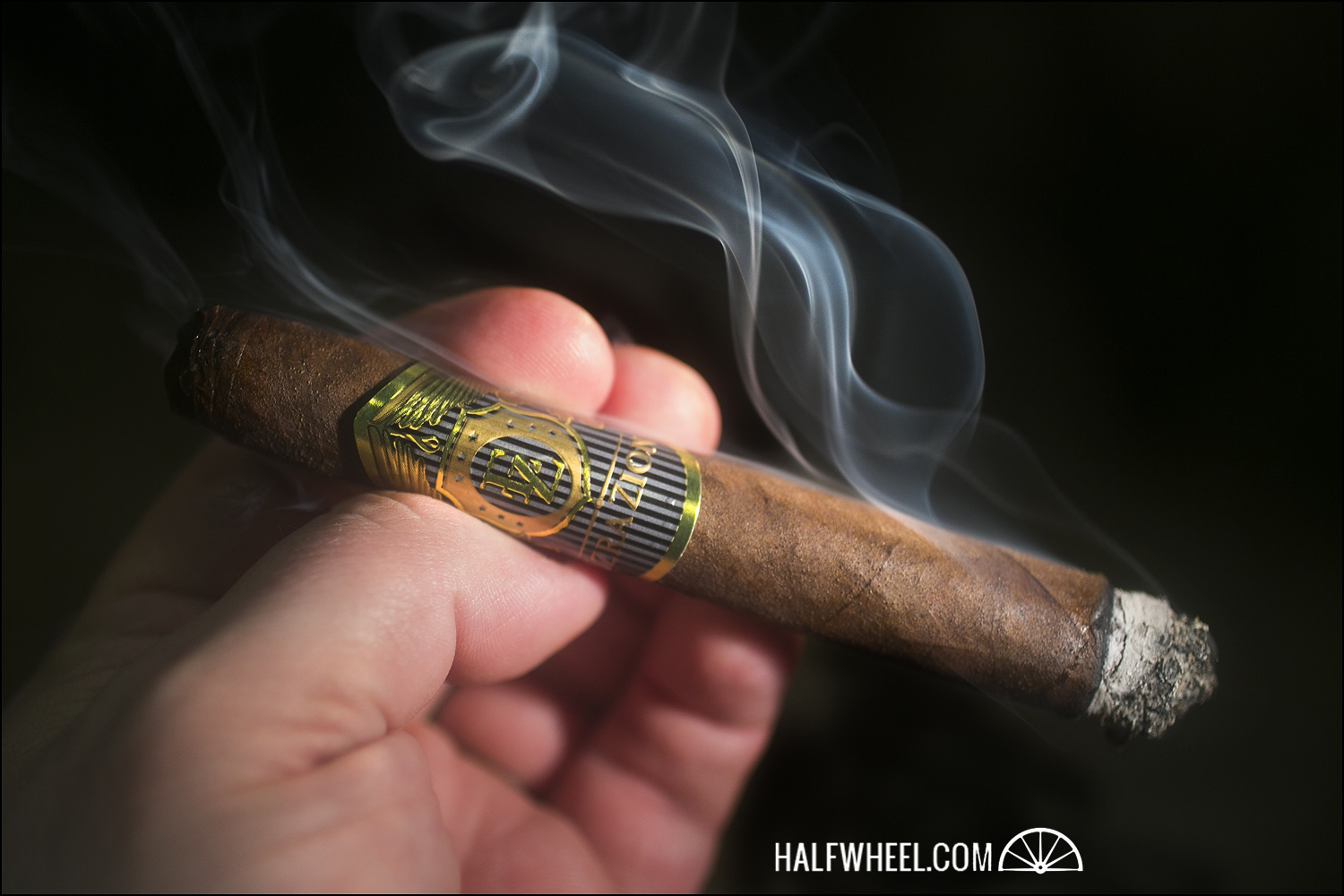 After the final third begins, the profile of the Ezra Zion shifts again with the bread-like popcorn note morphing into a combination of tea, leather, earth and creamy nuts that is further enhanced by the black pepper that continues to build – albeit very slowly – on the retrohale. There is still almost no sweetness to be found, but the construction continues to be a high point overall. This is a very easy cigar to finish, with a cool nub and no bitterness at the end, and I am able to smoke it down to a little less than an inch pretty easily. We are giving away a five-pack of Ezra Zion FHK Truths.
Leave a comment to enter. Contest rules are here.
Contest closes January 7, 2014 at 11:59 PM CST.
89 Overall Score

The Ezra Zion Honor Series FHK Truth seems to have something for just about everyone:  a fairly complex profile with some interesting flavor transitions throughout, excellent construction, great smoke production and wonderful balance. Yes, there could be a little more sweetness in the profile to really put it over the top, but that really is a minor quibble in the grand scheme of things. While I did not enjoy the FHK quite as much as the Ezra Zion Tantrum, it is a very good blend, and well worth seeking out.