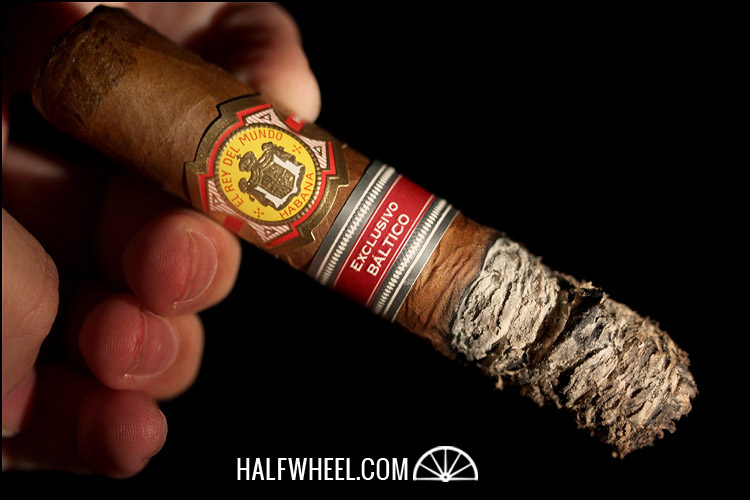 The first Edición Regionals didn’t feature the red and silver secondary bands that read “Exclusivo (Region Name)” that have become synonymous with the ER releases. In 2007, Habanos released eight (8) different Edición Regionals, which at the time was the most they had ever released. Two of the releases were the same size, the Gordito, which is a 5 2/3 x 50 Robusto Extra shape. One of the two was for the relatively new Vegas Robaina brand, aptly named Maestros, and was given to Altadis S.A., the Habanos distributor for Spain. The other went to El Rey del Mundo, a brand that has largely been given new life thanks to the ER program.

Oddly, Wikipedia probably has the best (concise) history of the ERDM brand online, and it reads in current form:

Believed to have been created, along with Sancho Panza, by German businessman Emilio Ohmstedt in 1848, El Rey del Mundo (King of the World in Spanish) was at one time the most expensive and prestigious cigar brand in the world.

Spanish businessman Antonio Allones took over the brand sometime around 1882 (a rival version of the brand’s history claims the brand became defunct after Ohmstedt’s death and Allones re-registered it, but cigar connoisseur Min Ron Nee maintains the brand was passed to Allones from Ohmstedt’s company, based on records stating Allones as the owner of El Rey del Mundo from as early as 1873). Under Allones, the brand reached the height of its worldwide prestige. In 1905, Allones’ company was bought by the Díaz Hermanos y Cía venture, owned by Cándido Vega Díaz (supposedly the namesake of Don Cándido cigars), which was later renamed the Rey del Mundo Cigar Co. to reflect its most famous asset. The company also produced such famous brands as Sancho Panza, Rafael González, and Don Cándido.

Production continued after the Revolution and the brand maintained its popularity through the 1960s and 1970s, but as the world taste started to run towards stronger cigars, the milder El Rey del Mundo brand began to lose its status as a foremost brand of Cuban cigars. Despite its loss of popularity, El Rey del Mundos cigars are still prized for their mild, complex flavors, with the Choix Supreme, Grandes de España, and Demi Tasse sizes being particularly popular among connoisseurs.

In 2007, Rasa Trading, the Habanos distributor for the Baltic Region (Estonia, Latvia, Lithuania and select parts of Finland) received its first ER, the El Rey del Mundo Edición Regional Vikingos. Only 408 boxes of 25 cigars were made (10,200 Total Cigars) and even before the cigar was released, the number was anticipated to be too small. From the get go the ERDM looks great. The wrapper is milk chocolate with some red leather to it, but you can tell there is some depth to it. Veins are mild, there’s the pronounced roughness common in Cuba’s creations, but overall it’s a pretty good looking Cuban, as it seems most ERs are. The cigar feels a lot bigger than the dimension, particularly in terms of RG, but it passed the actual measuring. One thing quite unique to the Gordito vitola is the oddly flat cap. The pictures don’t do it that much justice, but the mold is noticeably flatter than the normal practice. There’s not much of an aroma from the Vikingos, some light barnyard, a touch of aged leather and some other mildness. From the foot I pick up a sweet bbq note, some soft milk chocolate notes and a bit of a floral note. Cold draw is very gritty with a bit of sweet tang, cotton candy and bbq notes somewhere around medium-full. The draw is slightly tight, but not worth much concern.

The first rid begin with a bit of the hickory bbq sauce, followed by an orange flavor that tastes identical to Tang (the drink, not twang) and then my notes say Nica. The reason is, the remainder of the initial flavor is cedar and black pepper, it’s extremely full and extremely not-Cuban. To somewhat of my dismay, that’s much of the rest of the third, the pepper and cedar continue to battle it out with little getting in the way of the two dominant flavors. If you really concentrate you can pick up some cotton candy and some actual twang, but it’s deep down within the flavor profile and rather hidden. Shortly before the transition, there’s some herbs and harshness, which begins the pondering of whether or not the Vikingos needs more time. Pretty quickly into the second third, the pepper breaks free and becomes the dominant flavor of the ERDM. There’s black pepper up front and mid-tongue, white pepper on the back of the throat, and unlike the first third, it’s rather controlled. The cedar hasn’t changed one bit from the first third, but there are some additional flavors that begin to become noticeable, particularly a mushy sweetness, herbal twang and some bitter coffee on the retrohale. While the Vikingo holds ash great, the burn is rather uneven and begins to become rather problematic into the second third, but the rest of construction is pretty good.

I was really hoping the final third would see a departure or at least drastic change as far as the pepper was concerned, I was disappointed. The complex arrays of pepper remained the defining feature while the sweetness and herbal twangs began to slowly leave the cedar to occupy only the finish of the El Rey del Mundo. There’s really not much change, except for a tightening of the draw that takes place around the last inch and a half, shortly before the Vikingo just looses it. By the halfway point of the ERDM Vikingo, the question went from whether the cigar needs time to how much time. Pretty much everyone who smoked this at the Festival indicated that this cigar was going to have great and lengthy aging potential, I think they are right on about this. In its current form, I don't think the pepper and cedar can do enough to make this a great cigar, particularly when the flashes of other flavors come through. Quite frankly, if you want cedar and pepper, go find a Nicaraguan cigar wrapped in Corojo. The unique sweetness that was described by various individuals in 2007 is by all accounts still here, even if I wasn't the largest fan. This is a high-priced ER that isn't smoking great right now, but I think even right now and the prices they demand, this is not a high-priced gamble, which is totally not Edición Regional-like.