Every cigar brand with a bit of history has releases that are more highly coveted than others—limited releases, early projects, things that were supposed to come out and didn’t—you get the drift. For José “Don Pepín” García, El Rey de los Habanos and My Father Cigars, I would venture to say that one of the most coveted sticks is the original El Centurion.

The El Centurion name dates back to 2007 and a cigar that Pepín released at the RTDA Trade Show, the annual industry event now known as IPCPR. It was his first official limited edition and came in three vitolas—5 x 50 Guerreros, 6 1/2 x 52 Gladiadores and 5 1/2 x 52 Emperadores—with 850 boxes of 20 cigars of each size and prices north of $10 per stick. The blend was said to be his personal one, and the release was such an overwhelming hit that it was said to be sold out before noon on the first day of the show. As Pepín’s stature, reputation and notoriety in the cigar business grew, so did the demand for the cigar that had earned rave reviews. As Charlie Minato noted in his review of the lancero, this is what was said about El Centurion at the time of its release:

However, Pepín may have described it best, when he said that El Centurion tastes like old Cohibas and noted their aromatic qualities.

At the end of 2007, a 6 7/8 x 42 lancero vitola was added via the Lanceros Collection by Don Pepín García sampler, which added 2,000 more cigars to the mix and brought the total number of cigars released under the original El Centurion name to 53,000.

As those cigars made their way from retailers’ shelves to consumers’ humidors and ashtrays, the demand to find them increased, and it would be silly to think that My Father Cigars didn’t hear consumers’ call for the line to come back. The problem? The El Centurion name was owned by Tropical Tobacco, Inc. the company headed by Eduardo Fernández, García’s former business partner and the person who is often credited with helping Garcia establish himself in the United States. In the legal proceedings that occured between García and Fernández, it was discovered that this was the case, which presented a challenge for the Garcías to bring the cigar back to market.

The solution: the My Father S Special, an event-only cigar that shared a number of design aesthetics with the original El Centurion and was said to share a flavor profile, though the latter has been debated fairly extensively. In March 2013, Federal Cigar in New Hampshire announced that they would be getting a store exclusive offshoot of the S Special, the My Father Special F.

While many thought the S Special would have to satisfy their cravings for the original El Centurion, in March 2013 the company announced that it would be bringing back the El Centurion name with a four vitola release that would debut in May:

This year proved to be a year that would be marked by a number of things when it came to My Father Cigars, including the company’s celebration of its 10th anniversary and a number of store exclusive releases, primarily under the Flor de Las Antillas line with five store exclusives vitolas debuting over the course of about four months.

Flor de Las Antillas was not the only brand in the My Father portfolio to get a store exclusive, as in mid-November it was announced that three prominent stores would be sharing the first limited release size of the El Centurion line, a 5 5/8 x 46 corona gorda called the El Centurion Toria. The three stores getting the cigar, Federal Cigars in New Hampshire, Atlantic Cigar in Pennsylvania and Casa de Montecristo in Illinois, all have notable relationships with My Father Cigars, ranging from hosting large scale events to being home to numerous other store exclusive sizes, all of which can be read about in the original news article. 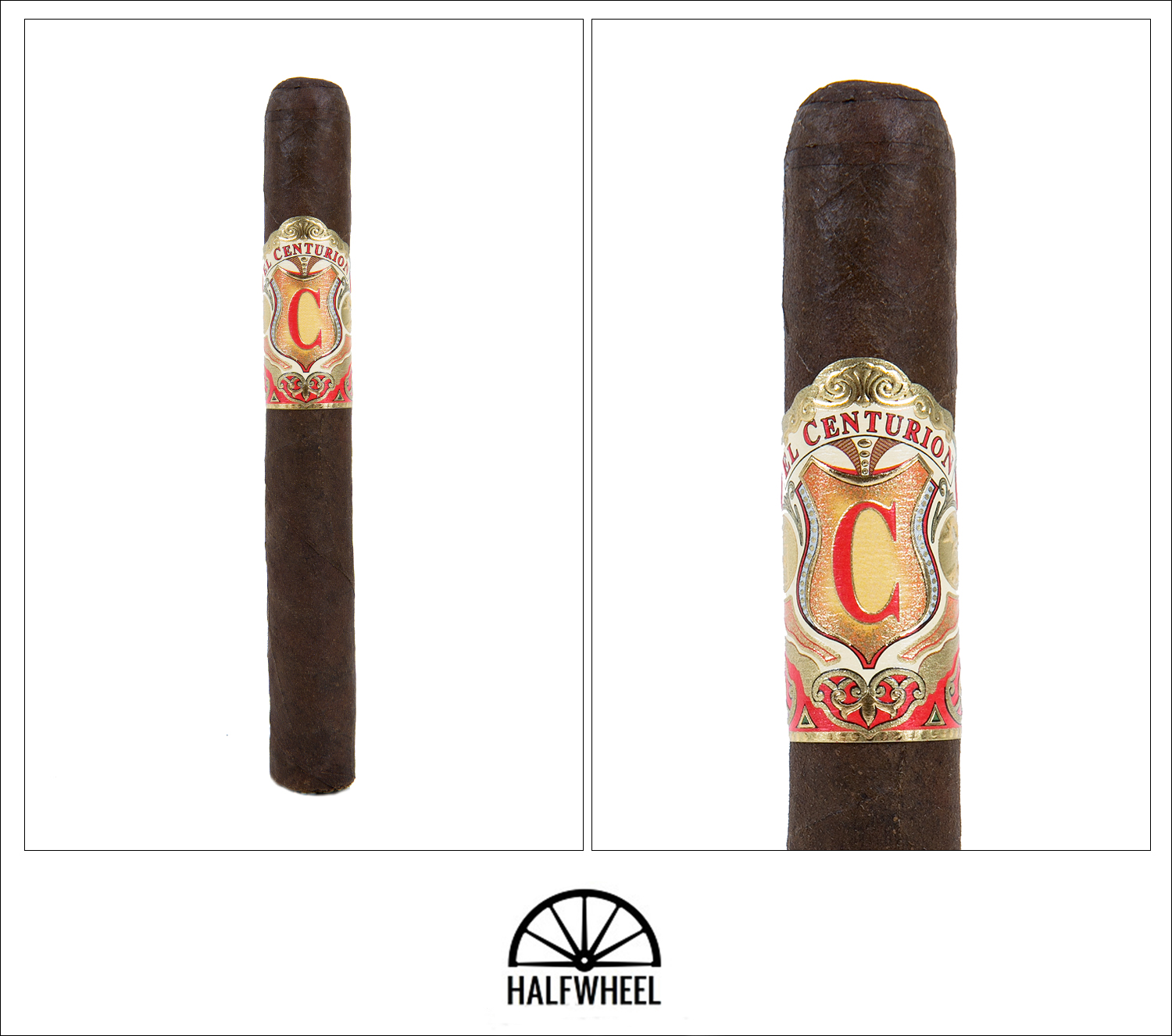 The El Centurion Toria has a rich dark brown wrapper with a bit of tooth and just a bit of crystallization on the leaf. It’s firm to the touch without feeling too hard, and the veins are small giving the cigar a smooth feeling on the fingers. The prelight aroma has a duality of sweetness and meat—definitely not sweet meat, mind you—but distinct smells of sweetness and meatiness, the former evoking thoughts of grape jelly and the latter reminding me of steak tartare or a fatty steak ready to be cooked. There are also some trace notes of wheat bread and dry cedar in the mix that stood out on one of the three cigars smoked. The cold draw ranges from ideal to just the slightest bit firm and offers a completely different set of notes: dark chocolate, espresso and a bit of pepper and spice.

I’m struck by how much lip tingle I get from the El Centurion Toria in the first few puffs—there is definitely flavor on the tongue and aromas to be picked up in the nose, but the main physical sensation early on comes from the lips. Early on there is also a sweetness that wafts off the cigar as I am writing down some notes that is absolutely phenomenal and makes me think of a citrus covered piece of cake being served for dessert. Pepper becomes a part of the equation nearly from the get-go, though not an overpowering one. The first retrohale is chalky and a bit peppery, enjoyable and tolerable despite a somewhat thin smoke texture. The pepper component picks up a bit—particularly in the eyes—as the cigar makes its way through the first third, while the flavor dries out a good bit heading to the second third with wood and white pepper leading the way and a faint touch of orange juice sweetness in the background. Another retrohale at the end of the first third shows just how much pepper the cigar has picked up. 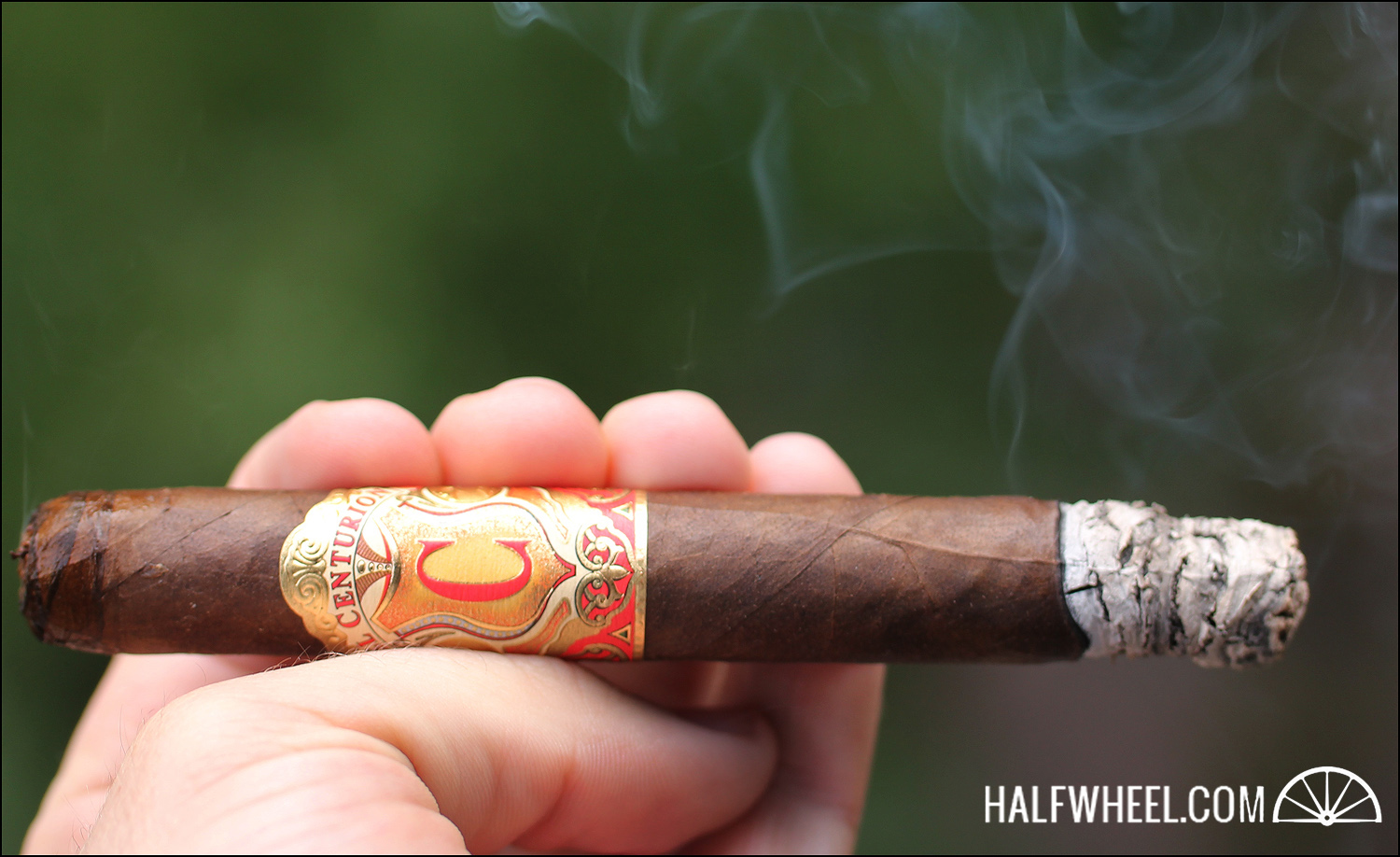 With the second third underway, the El Centurion Toria has become much more upfront in terms of bold wood flavor and pepper, now going after the palate with a one-two punch. A subtle sweetness remains more prevalent in the nose, but my attention is being commanded by the almost overwhelming notes on the palate, all very concentrated and upfront while being a bit out of balance. They are almost fighting against each other instead of working with each other to present a blend. There aren’t many changes in this section, other than the vitola resulting in what seems to be a redlining of the blend’s potential. 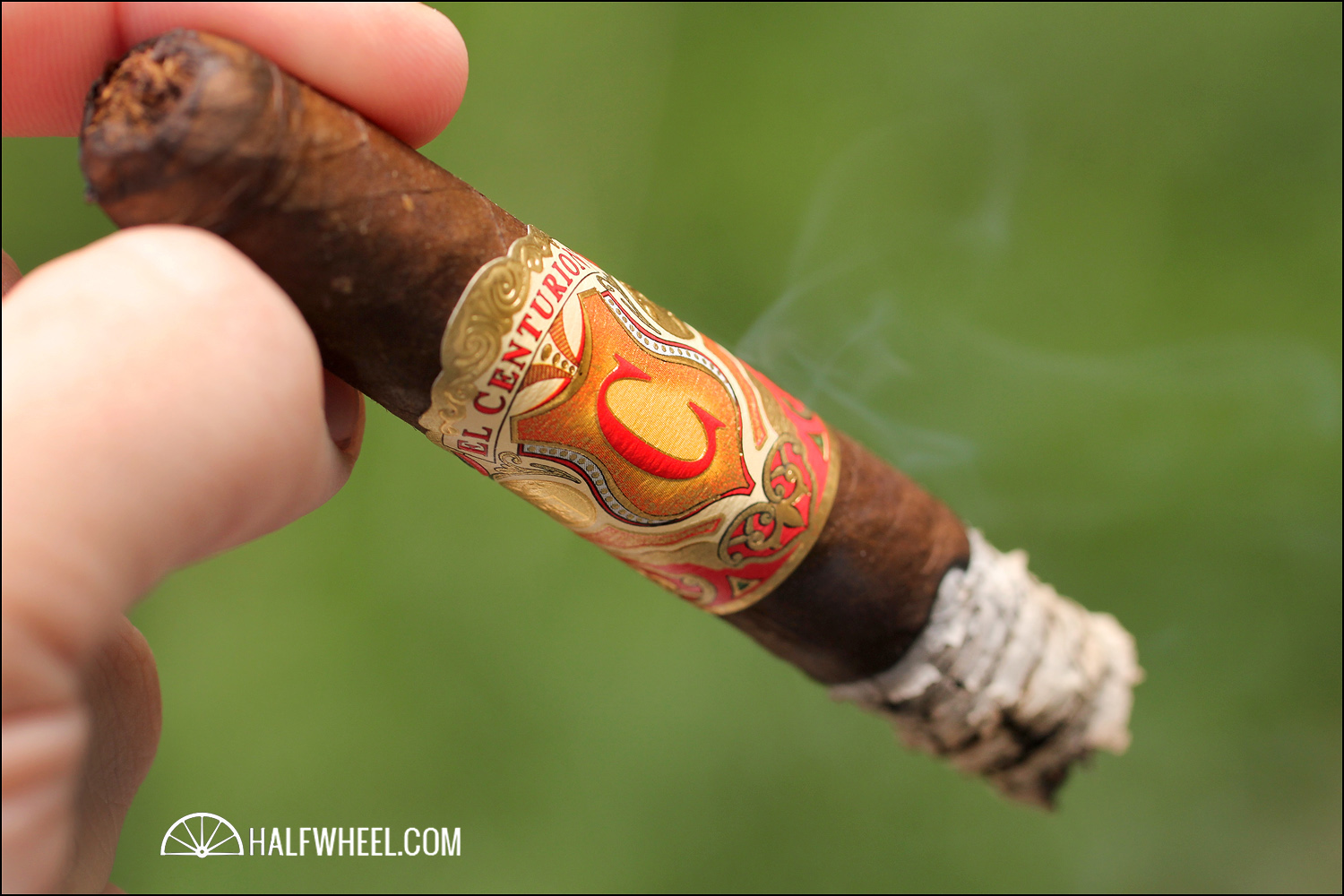 The transition to the final third begins with sharp pepper notes in the nose but also a return to a somewhat softer and sweeter flavor profile, as the El Centurion Toria has begun rounding itself out with the addition of an orange marmalade note that provides some welcome respite from the very dry second third. The draw also opens up considerably in the final third, helping increase the smoke production and also giving a bit of relief from a draw that while not overly tight seemed to be requiring enough effort to add some fatigue to the mix. 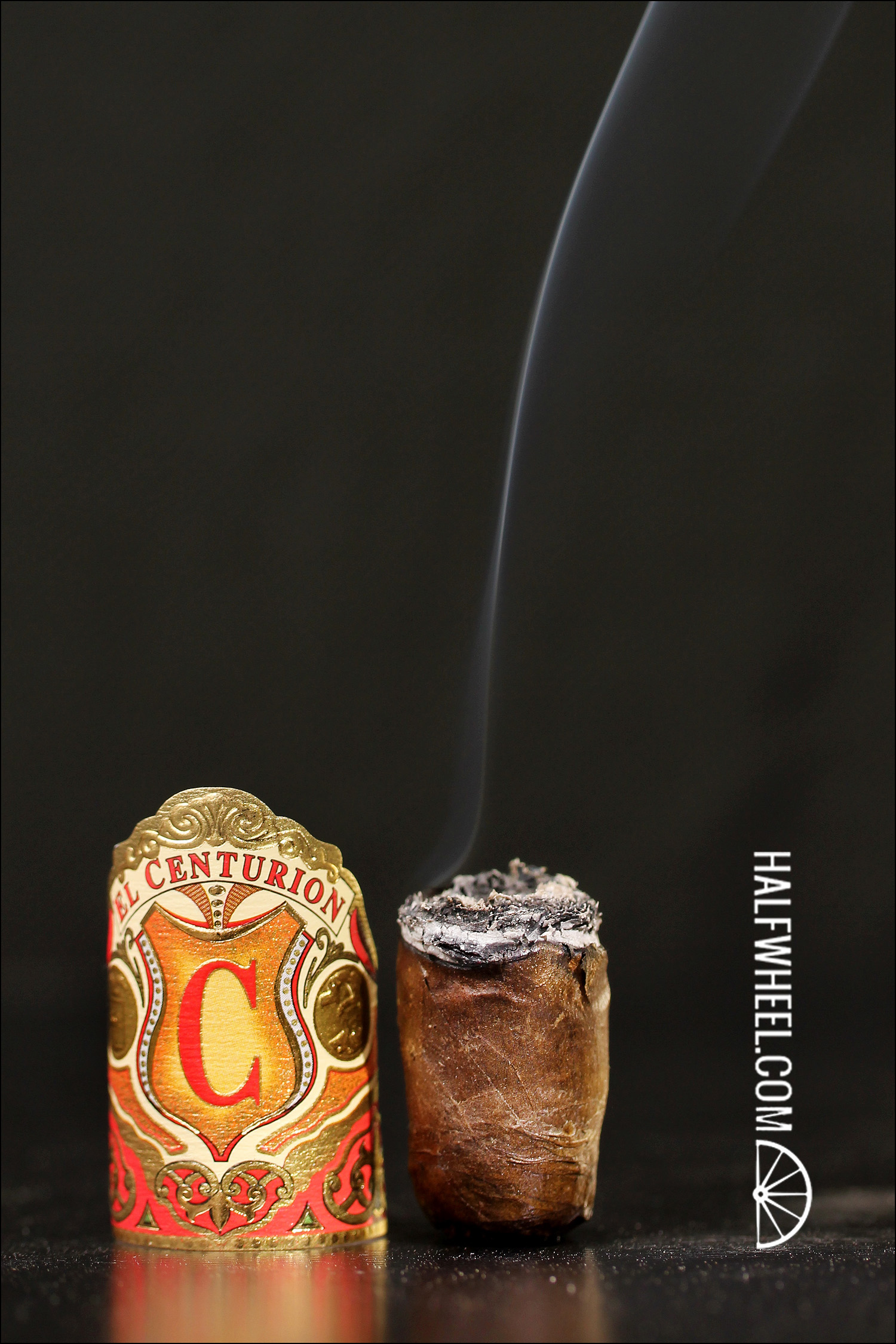 Update (Dec. 27, 2013) — An earlier version of this review identified the original owner of the El Centurion trademark as Eduardo Fernandez, when in fact it was owned by Tropical Tobacco, a company owned by Fernandez. It has been corrected above and I apologize for the mistake. Additionally, two notes have been added to the Final Notes section that chronicle the El Centurion trademark’s history. –PL

I recently smoked the El Centurion Robusto—which scored well on halfwheel back in May—and I remember being impressed by how balanced it was, with the blend having enough room to breathe and still show off all its strong points. In the case of the El Centurion Toria, I wonder if the smaller ring gauge is constricting things too much, as while I got the bulk of the same notes that I did in the robusto, they all seemed sharper and more pronounced, almost being too big for the format of the cigar and having nowhere to spill over to except the nose and taste buds. This site has been guilty of clamoring for blends to be produced in smaller ring gauges, and while most of the time the results are favorable, in this case, and for my palate, they're not. I'd rather give the El Centurion blend a few extra ring gauges in which to operate, because when it does, the blend truly shines.