I started Lancero50 with what I consider the perennial favorite amongst the mainstream releases as the best regular production Lancero on the market today, the My Father No. 4. And so fittingly, on Father’s Day nonetheless, I end with another cigar from the García family, one of the most prized and cigar that many thought never existed and a blend many have never heard of, El Centurion. In what is perhaps Pepín’s greatest departure from his normal blending profiles, the El Centurion, for those that know it, is regarded highly, very highly. It is without a doubt my favorite line that of El Rey de Los Habanos/My Father Cigars, so the expectations are and have always been high for the limited of limiteds, the Lancero. The Story
At the 2007 RTDA trade show, Pepín released a special cigar, a cigar for himself. It was called “El Centurion” and the legend was there from the beginning. By noon of the first day of the show, they were sold out. There were only eight-hundred and fifty (850) boxes of three sizes offered, the first limited edition to be offered by El Rey de los Habanos Inc. Official word from El Rey de los Habanos:

But, the result is best described by Pepín himself:

El Centurion tastes like ‘old Cohibas’ and they are aromatic.

Now, as I mentioned in Lanceros Collection by Don Pepín García, there’s some fun with the math:

The official word is that there were only 50,000 cigars released. However, 850 boxes of the original three sizes were released, which adds up to 51,000. Then add the 2,000 Lanceros made, and it turns out there were 53,000 El Centurions made. Pepín has said to use a modified El Centurion blend when rolling at events, and he has been known to roll Lanceros.

Update: A deposition in the El Rey de Los Habanos Inc. case revealed that El Centurion is a mark actually owned by Eduardo Fernandez of Tabacalera Tropical, Casa Fernandez and AGANORSA fame. Paul Palmer said that the mark was transferred to El Rey de los Habanos, which is now under sole ownership of the Garcías.

It’s a dull earthy hue with a minimal amount of sheen to contrast the El Centurion’s classic band. The Nicaraguan Habano wrapper has an extremely light amount of veins, but the immense fading and coloring of the wrapper make it appear much rougher than it is. Packing is excellent, producing the perfect amount of resistance. Aroma is sweet dry brownie hint over some woodsiness and dull peppers, full. The foot is thicker and a bit more muted, although denser. Notes of sweet brownie cocoa, cherry woods and some toastiness comprise of the full and complex foot aroma. Lighting
It’s odd. The head aroma is just a much more concentrated version of the foot. Initial portions of the flavors are indiscernible, but slowly, the sweet brownie, cherry woods and a bit of white pepper become apparent. Cold draw is open, with the brownie note up front, a dominating red and white pepper mixture and some earth towards the end. It’s actually shocking how sharp the pepper is for this blend, but it is what it is. The aroma of the El Centurion has a uniqueness found in each vitola: sweet tobacco, caramel and earth; and full. First draw of the El Centurion Lancero produces average amounts of smoke on a relatively open draw. Flavor starts as a sour woodsiness that begins to bitter, it’s not cedar, so it’s a bit of a new sensation given the level of detail. Black pepper joins the mix, adding some harshness to the fairly developed flavors. The medium-long finish is sweet nuts and a sour woodsiness with the black pepper at the back of the medium-full flavor. First Third Five minutes in, the peculiar (but consistent) start is still around. It’s really odd, none of the other El Centurions have this sort of roughness to them. Anyways, five minutes in, cotton candy. It’s such a weird flavor, but it just adds itself to the mix creating one of the most intriguing contrasts a cigar could ever have. The two contrasting sides go at it for the remainder of the first third, although the only sweetness on the finish is a sweet earth note. Construction with the El Centurion Lancero is as good as it gets. Utterly consistent burn, an inch of dark ash. Fortunately the braw tightens a bit, entering the area just where I like, which helps the unbelievable smoke production. I cannot stress the aroma, the sweet earth, caramel and tobacco are simply unbelievable, just as they always are.

Second Third
It’s a much earthier flavor: grass, herbs, dark tobacco, earth, cedar and peppers. There’s a bit of underlying sweetness from the El Centurion, but the artificial cotton candy is gone. Finish is just a continued developing of the core, particularly the cedar and tobacco notes. It’s full and full, and lengthy and developed. While body is full, strength is medium. The construction trophies of Pepín continue to mount, there is not a single El Centurion Lancero I’ve had that have not been unbelievably well burning. 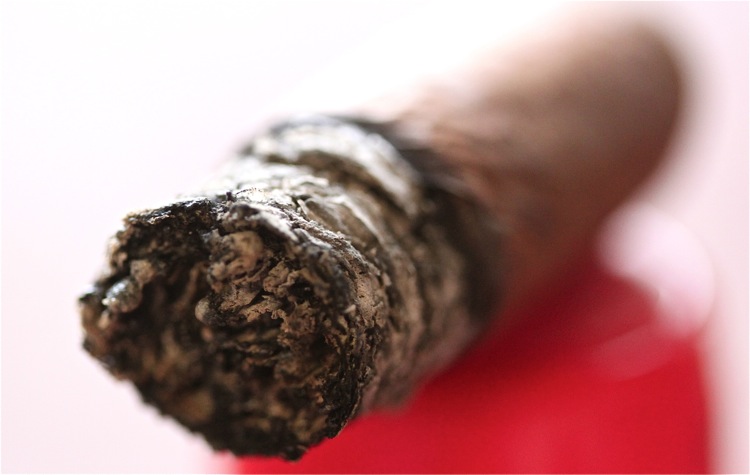 Final Third
The earthy characteristics not so much the generic earth flavor that we throw around constantly) pick up and deepen. There’s added meatiness, notes of hickory, cedars and oak woodsiness. It reminds me a lot of the second third of the El Centurion Guerrero, almost to a T. It’s been a few months since I last burnt my finger and unfortunately a storm is interrupting this. In case you can’t tell, the picture above is the El Centurion sitting on the lid of a Coke bottle. The El Centurion Lancero is made to be smoked, and it’s difficult to put these down. For the Novice
This is the least novice friendly version of the El Centurion. The Lancero’s diversity and sharpness make this a hard recommendation for a new smoker. If you have the opportunity to pick these up, do it, but wait until you have about two and a half hours to fully enjoy this. (I cannot stress the importance of slowing dramatically down, this cigar performs best as slow as possible, which is difficult given how good this is.) In the End
Where do I start? While I have not have had every cigar Pepín has put his name on, I’ve had a lot. Of those, I contended this to be the singular greatest. It is unbelievable testament to all that the Garcías are capable of. A flavor that is challenging and rewarding and construction that is singular in the sense that it is only found on this cigar. Smoke leaves the channel of the El Centurion flawlessly. And when you exhale, the thickness means that for a split second, there is a literal cloud of smoke that blocks your visibility. The El Centurion Lancero is in every way a work of art, and that’s about it. Like the My Father No. 4, it is a classic and complete cigar, leaving nothing in doubt. And like every legendary cigar, the El Centurion Lancero has a story, and unfortunately that story includes never making these again.

Could a cigar get better? Maybe. Will one? Almost certainly not.