In 2007, José “Don Pepín” García released his first official limited edition cigar, the El Centurion. Rolled in three vitolas at first limited to 850 boxes of 20 cigars and priced well north of $10, the release was said to be his own personal blend. A Lancero was added to the line in December of 2007 and the company released the My Father S Special in 2011 that shared a similar look and profile to the original limited release.

Earlier this year, the company announced it would be bringing back the release as part of its 10th anniversary. We had the details in a news post back in January:

El Centurion was originally released in 2007 at the RTDA convention and trade show in three sizes with a production of 850 20-count boxes of each size, a quantity that was sold out before noon on the first day of the show. Those three sizes were:

El Centurion later returned in a sampler called the Lanceros Collection by Don Pepín Garcia, which was released in December of 2007. Each sampler contained two El Centurion Lanceros, a 6 7/8 x 42 vitola which have been reviewed on halfwheel here and reduxed here. Production on the sampler was said to be at 2,000 boxes, meaning 4,000 El Centurion Lanceros were produced.

The history of El Centurion goes back to Pepín’s early days in the United States and El Rey de los Habanos. The cigar was created by Pepín for himself, with a comparison to the aromatics of old Cuban Cohibas. Production was handled at Tabacalera Cubanas S.A. in Nicaragua, where Garcia’s early cigars were produced and which was recently announced as the factory handling production for some of L’Atelier Imports’ cigars. The brand’s name was owned by Eduardo Fernandez of AGANORSA, Tabacalera Tropical and Casa Fernandez, who entered into a legal dispute with Garcia in August of 2010 over El Rey de los Habanos, Tabacalera Cubana and several other ownership issues. That issue was resolved in September 2011, and as part of the settlement, the company, the factory and the El Centurion brand were all fully acquired by Garcia.

In early 2011, during the period between filing and settlement, word of new event cigars that bore a striking resemblance to El Centurion were beginning to circulate at My Father Cigars events. That new cigar was the My Father S Special, which was reviewed on halfwheel here and reduxed here. The blend was different and there were differences in the flavors of the two, but the physical resemblance was certain, including sharing a 5 x 50 vitola.

Garcia and Pete Johnson of Tatuaje announced in October that they will be celebrating the 10th anniversary of El Rey de los Habanos and Tatuaje in Miami on May 4th.

There was then a press release in March:

March 1, 2013 (Doral, Fla) — My Father Cigars brings back the cigar that left everyone wanting more.

Back in 2007, the company released the Centurion in 3 sizes as Don Pepín’s first ever limited edition. At the time, only 850 boxes of each size were made. Many of our supporters have asked for us to bring back the cigar that left them wanting more. In honor of the Don Pepín Garcia 10th Anniversary, we bring back the Centurion and it is here to stay!

The Centurion is coming back in 4 sizes: Robusto, Belicoso, Toro and Toro Grande. It consists of all Nicaraguan Tobacco with the filler composed of Criollo, Corojo Habano, and Sancti Spiritus; together they give this classic a 3/4 to full body strength. The wrapper is a sun grown Criollo 98. The boxes will have the regal appearance as in 2007 with some minor enhancements and it will come in boxes of 20 as a regular production.

Expect these in stores for the 10th Anniversary Celebration of Don Pepín Garcia. Shipping will begin in May 2013!

The four sizes are:

Here are what the boxes for the 2013 El Centurion look like: The El Centurion is a wonderful looking specimen with a triple cap and a dark mocha brown wrapper that is quite toothy to the touch. There are some bumps and veins running down the length, but not enough to really annoy. When squeezed, there is the perfect amount of resistance while the aroma coming off of the wrapper is a combination of light cedar, dark chocolate, nutmeg, espresso and a tiny amount of pepper.

The first third of the El Centurion starts out with a dry leather note that is quite strong for about 10 puffs, but then dies down to more of a background note allowing other flavors of oak, bitter espresso, nuts and earth. While the finish is quite dry, and there is a nice sweetness in the blend, it is far too light at this point to pinpoint it with any accuracy. There is some nice black pepper on the retrohale, just enough to impact the profile without overdoing it, and just a tiny amount of spice on the tongue. Construction-wise, the burn is wonderful and the draw is just a little loose, albeit well within normal limits. The overall strength starts well below the medium mark, but hits a solid medium by the end of the first third. Coming into the second third of the El Centurion, the profile becomes noticeably creamier with flavors of hay, chocolate, espresso, oak and earth. The sweetness from the first third has become more distinct—now a cherry note—combining well with the rest of the flavors. I am also tasting a distinct floral note that comes and goes, but seems quite strong a specific points, especially near the halfway mark. There seems to be a little more pepper on the retrohale, but the spice has dissipated to almost nothing. The burn continues to be almost perfect, while the draw has tightened up nicely. Smoke production is well above average, and the strength seems to have increased slightly, but still well in the medium range. The final third of the My Father product retains the floral note from the second third as a major component, while adding in flavors of cinnamon, creamy oak, earth, and dark chocolate. The cherry sweetness is also still quite evident, while the black pepper on retrohale gets noticeably stronger at the very end, but not harsh. Both the burn and draw remains excellent until the end, as does the amount of smoke production. By the end of the cigar, strength seems to stall out about halfway between medium and full. 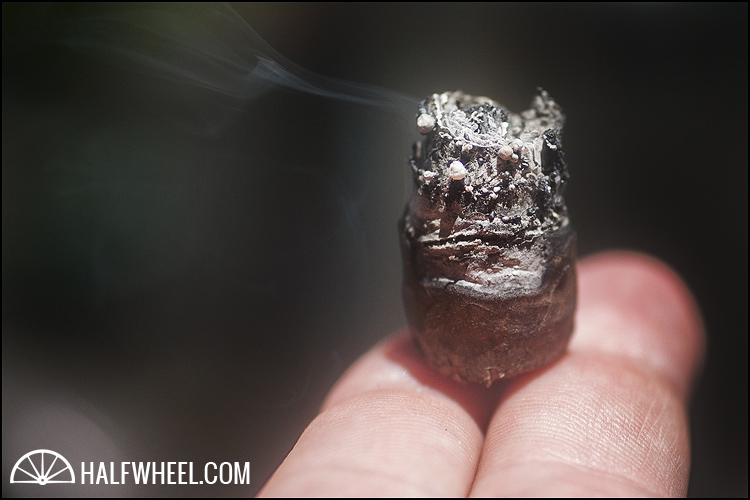 This was always going to be an interesting cigar to review, as the original El Centurion is considered one of Pepín's best blends, and for good reason. As mentioned above—this incarnation—while bearing the same name, is not even close to the original blend. As a result, obviously, they taste almost nothing alike. Having said that, I enjoyed this blend quite a bit: excellently balanced, wonderfully complex and almost perfectly constructed. Is the new version better than the original? I would say no. If it will sell at roughly half the price as the original, I would call it a great deal, one that people will love for what it is, not what it is named.