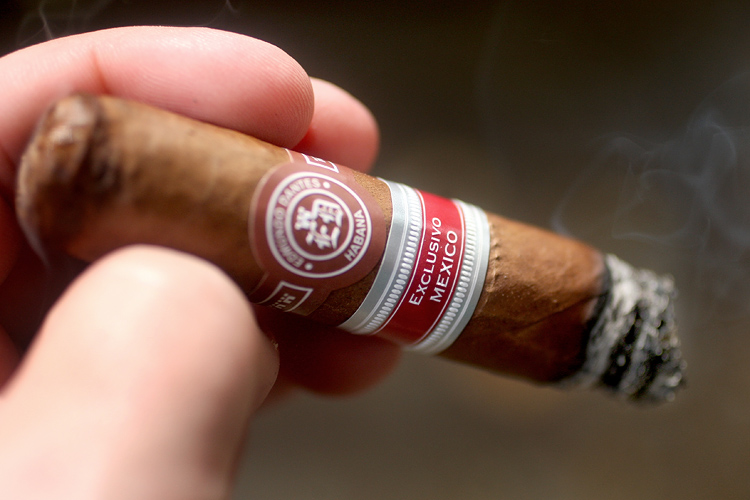 In 2007, Habanos S.A. released the first Edición Regional for the country of Mexico, the Edmundo Dantes El Conde 109 Edición Regional Mexico. Only 600 boxes of 25 were released in 2007 with a rerelease of another 600 boxes of 25 coming in 2008 in the exact same size and allegedly blend. The Edmundo Dantes brand came about in a very interesting way.

Because Montecristo is a “global” brand it cannot be used for an Edición Regional. As such, the Edmundo Dantes brand was used for this release. The Edmundo Dantes are distributed by Importadora y Exportadora de Puros y Tabacos, which is the official Habanos importer for Mexico.

So far, there have only been three releases of the Edmundo Dantes brand (including the Conde 109 rerelease in 2008).

The Edmundo Dantes Conde 54 is an excellent sample with a red-brown wrapper that is extremely smooth to the touch. There is almost no oil present at all, and the cigar is slightly spongy when squeezed. The Cuban wrapper smells faintly of cedar, hay and chocolate.

The first third of the Edmundo Dantes starts out flavorful, but mild with dominant notes of hay, cedar, chocolate and nuts. There is a wonderful undefined sweetness that forms the baseline of the profile that is present and really combines well with the rest of the flavors. A saltiness develops on my lips, although it comes and goes after a strong start. There is a tiny amount of spice on the tongue, but almost no pepper at all on the retrohale, at least in the beginning. Strength starts out faint, but slowly builds to a mild medium by the end of the first third. Construction is wonderful, as are both the burn and the draw, but the cigar does seem to be burning a bit quickly, albeit not hot at all.

A creaminess develops in the second third combining with that same sweetness that I now can define as vanilla, along with strong flavors of nuts, hay and espresso. The spice from the first third is sticking around, but not getting any stronger, and there is still no pepper whatsoever in the Conde 54. Draw and burn are still perfect, although the Edmundo Dantes is burning a bit slower. The strength is continuing to build very slowly and reaches a solid medium by the end of the second third.

Coming into the final third of the Conde 54 and the combination of flavors becomes quite intense. All of the aforementioned notes are present in varying amounts with the nutty sweetness still dominant, but there is just a tiny more spice on the lips and about halfway through the last third I noticed a very distinct cinnamon note that really had me interested. Even as big as the Edmundo Dante is, the cigar was great to the end, as was the construction. Strength was a stronger medium by the end, but never really threatened to push over into the full category at any point.

I have been curious how this cigar would taste compared to the Conde 109 ever since they were announced. I absolutely adore the original Conde 109 and I was really hoping that these would be similar, although knowing Cuba, I doubted that would actually happen. While it is not quite on the same level as the 109, I am happy to say that the Edmundo Dantes Conde 54 is an extremely enjoyable cigar that easily holds its own. It has an extremely complex and smooth profile and the flavors it had were wonderfully rich and satisfying. These are well worth the money, even at the inflated prices they are selling for and my only regret is that I can't afford more of them to put down for a long while.