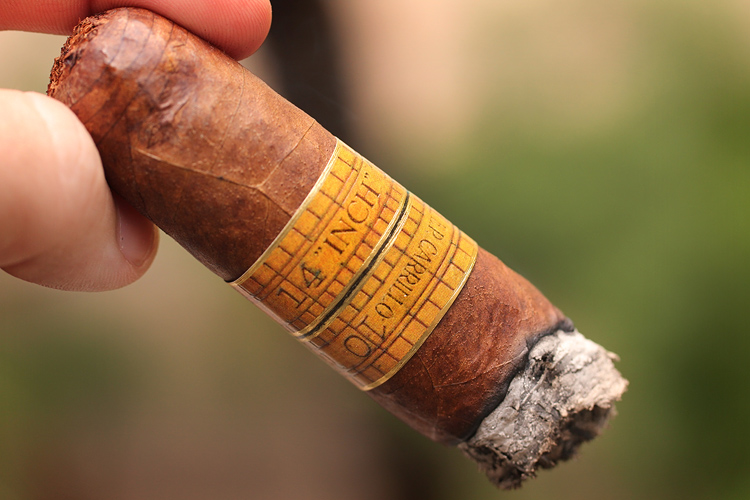 To borrow a line from Dave Niehaus, the former announcer for the Seattle Mariners, it just continues. Except in this case, it’s not the Mariners’ magical season of 1995, it’s the growing trend of large ring gauge cigars.

The new E.P. Carrillo INCH line joins the super size cigar party with a trio of vitolas all measuring 60 ring gauge or over, all of which will be released in both natural and maduro wrappers:

Here is what the two wrappers look like next to one another:

Ernesto Perez-Carrillo says the line was inspired by consumers asking for the company to make bigger ring gauge cigars. When he decided to do the project, he didn’t want to do a line extension of an E.P. Carrillo Core Line, so it required having special tobacco to create something new. The tobacco he used for the INCH is original Dominican Piloto seed, which traces its roots to 1999–2002. The wrapper also comes from the upper primings of an Ecuadorian Sumatra plant.

While the INCH will be a regular production line, the 2012 run will be between 100,000 and 125,000 cigars due to limited availability of filler leaves, which are a blend of Dominican Piloto Cubano, Corojo and Criollo ’98 as well as some Nicaraguan viso.

Due to a short-staffed office and other issues, the INCH will not be shipping in July as previously expected and Ernie Perez-Carrillo III put the odds of having the cigar before the IPCPR trade show at around 25%. He said shipments will likely start after the conclusion of the show. 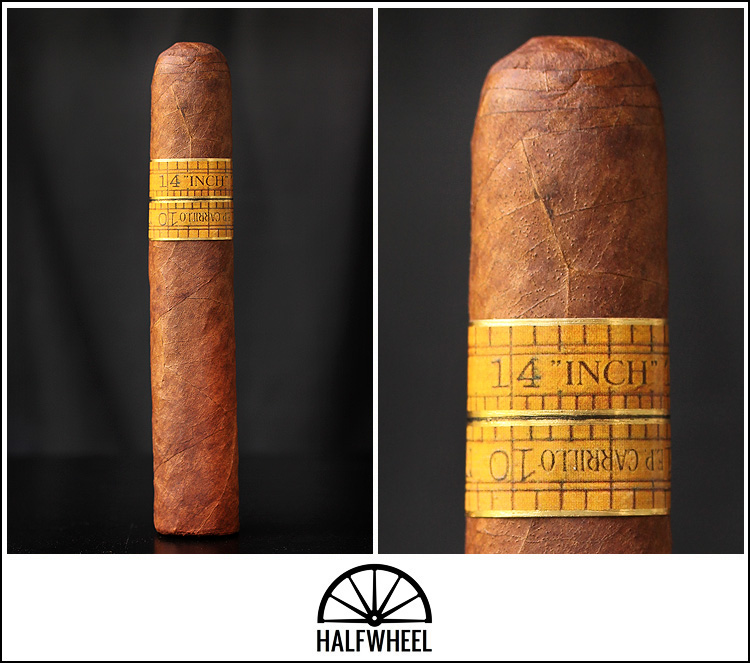 The box-press on the INCH No. 64 helps to make it feel a little less like the huge cigar it is, though there is no getting around its size. The leather brown wrapper has some small veins and a bit of texture to it, with a tight array of color variations giving it its color. The pre-light aroma has notes of white toast, some white grape, and just a trace of salt. Cold draw is easy, showing a non-descript note that I can only equate to plain oatmeal. There is a bit of spice in the equation as well, giving off more of a tingling sensation than assaulting the palate.

The E.P. Carrillo INCH No. 64 Natural starts off with an up-front note of pepper, wood and toast; it’s a medium-bodied if not overly heavy smoke that packs a healthy punch of spice. By the time the first inch has burned, the spice falls back just a bit and leaves a doughy, almost chewy medium-bodied smoke. The ash does a good job holding on through that first inch, falling nicely into the ashtray with a slight tap. Given its size, there was no way I wanted it to end up in my lap. As it to be expected from a cigar of this size—the volume of white smoke is plentiful. 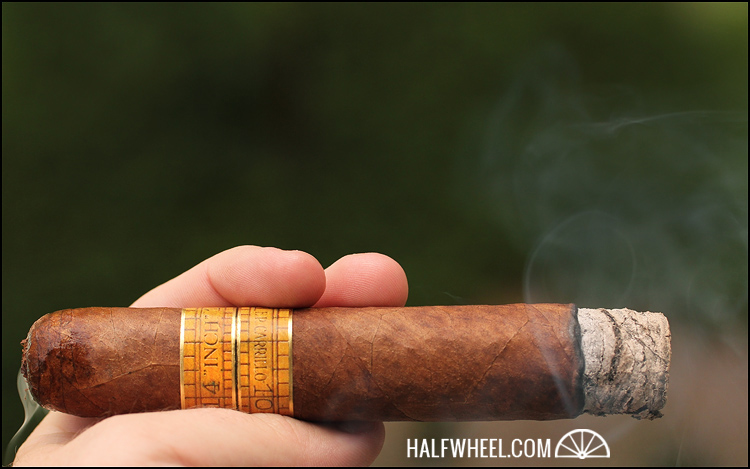 Once the ash breaks off and the INCH No. 64 moves into the second third, a distinctly sour note starts to come out and gives the flavor profile a new direction. Given the enjoyable first third, this is an unfortunate turn and forces me to hope that it will be a quickly fading flavor. It doesn’t seem to however, as it dominates the middle section of the cigar and leaves an unpleasant flavor on the palate and in the back of the throat. 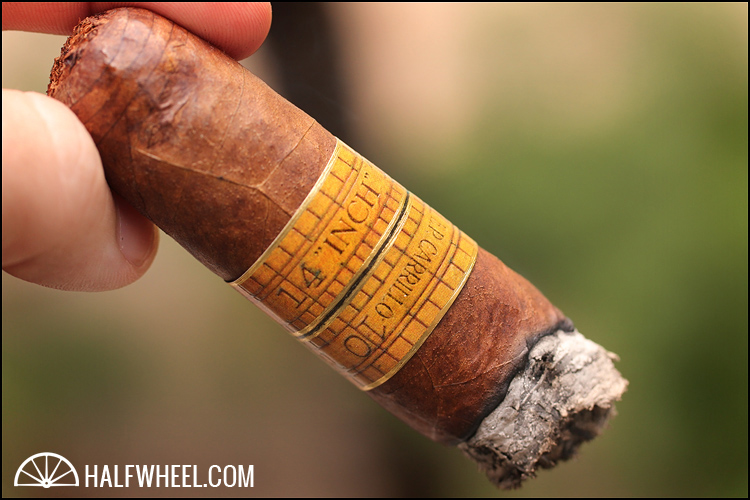 The final third of the INCH No. 64 shakes off the sourness in favor of a doughy pretzel flavor, a welcomed respite from the previous third’s flavor. Technical performance to this point has been flawless, with the burn line staying about as straight as can be expected for a cigar of this ring gauge. There are still some traces of harshness and sourness in this final third, though in much less quantity than what was in the second third. The burn rate seems to slow down quite a bit in this third as well, although the final notes see a return to woodiness and some spice. The INCH also becomes a bit more of a challenge to hold in the mouth when it gets down to its nub, a byproduct of its significant size. 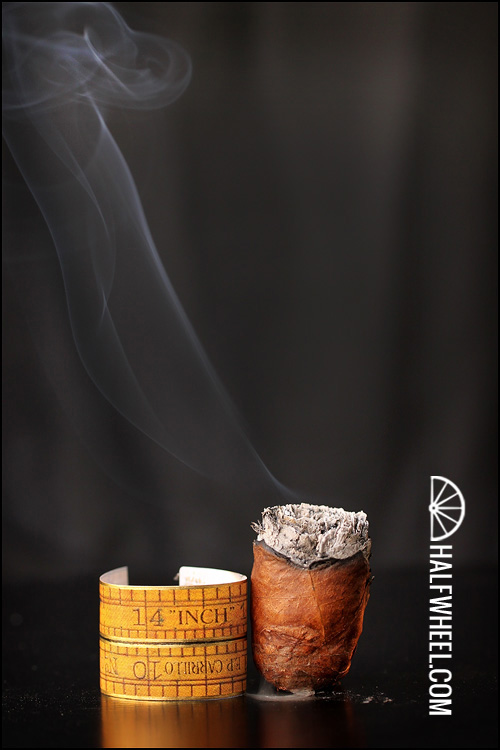 I've never been one to hide my dislike of big ring gauge cigars, and having tried a number of them I can't foresee my attitude changing anytime soon. The E.P. Carrillo INCH is a decent cigar that makes a valiant attempt at delivering good flavor, but the sourness in the second third took a great introductory set of flavors and ran them into the ground, forcing the cigar to try and make a big second half comeback. A lot of halfwheel's reviews have comments along the line of “if it just tasted like the first third the whole way through, I'd love it!” The E.P. Carrillo INCH No. 64 is no different. Take the first third and repeat it and you'd have me recommending this cigar wholeheartedly, even in its large vitola. As it is, however, it's one I'll be passing on.