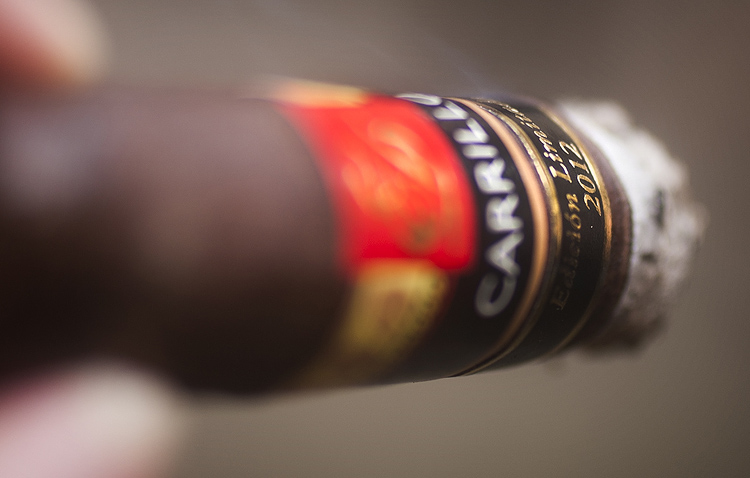 In late November 2012, E.P. Carrillo released the third edition of its annual limited release, the E.P. Carrillo Edición Limitada 2012. The 6 1/2 x 56 Toro Gordo was not widely publicized prior to its release, a slight departure from the company’s norm regarding releases, but some form of the cigar was expected given the annual nature.

For the second year in a row a dark wrapper was selected for the limited edition, this time a Connecticut Broadleaf wrapper over a Brazilian binder and Nicaraguan fillers. Like the year before, the cigar carried a $15.00 MSRP, although production was slightly smaller—down to 1,500 boxes of 10.

This is the fourth of the E.P. Carrillo annual limited editions:

It a dark wrapper, darker than I recall the Dark Rituals. The aroma isn’t as sweet as I normally find Broadleaf to be and quite honestly reminds me quite a bit of the Viaje Platino Samurai Maduro, although not as pungent. The cigar is large, but its plenty manageable once the cap is removed. Cold draw provides great resistance and flavors of sweet woods, peppermint and an underlying sweetness around the medium-full mark.

The first third of the E.P. Carrillo Edición 2012 begins with tons of outside smoke and flavors of sweet cocoa, cedar, a bit of black pepper and a contrast of both raw doses and highly developed versions of the aforementioned. While the draw begins a bit open, by the middle of the first third I find it to be on the tighter side, which is perfectly fine for me. In both examples, sweet versions of cedar and cocoa dominate the first third with bits of black pepper, floral notes and varying levels of harshness. Smoke production remains great, although the burn requires some attention.

Into the second third and I get the feeling I’ve seen this story before—minor progressions every few minutes. The cigar itself isn’t burning quickly and the flavors are also taking time to show dramatic difference. What I can tell you is the E.P. Carrillo is significantly grittier with some added sweetness. The harshness is no longer fading in and out and there is a bit more detail, but other than that—not much has changed. Strength remains somewhere between medium and medium-full for me, which was a bit shocking, although the body is definitely medium-full.

Unfortunately, the E.P. Carrillo Edición Limitada 2012 becomes more linear and less detailed in the final third. I didn’t really see it coming, but it happens. The floral notes are now something 30 minutes in the distance, although a butterscotch note is developing on the finish. Still, it’s pretty much the same: some typical Broadleaf notes, cedar and cocoa—both sweet, pepper and harshness. While the flavor wasn’t really every full for me, my palate is definitely not in the same state as it was before I started and I won’t be reviewing anything tomorrow.

The E.P. Carrillo Edición Limitada 2012 is not a bad cigar; it's just not a better cigar. Each and every time, including if the cigars were on even price points, I would take either of the two great Broadleaf cigar from E.P. Carrillo, the Core Line Maduro and Cardinal Maduro, over the Edición Limitada 2012. We run a site that focuses on cigars that are not regular production, and so often I find myself in this position: the better cigar is the one in the less fancy packaging, the one with the lower price tag and the one that is not the latest and greatest—at least for me.