Alfred Dunhill was truly a giant in the cigar industry in his day: prominent London tobacco retailer, pipe maker, entrepreneur and the founder of the Dunhill luxury goods company that lives on today.

Dunhill opened his retail store in 1907 and developed relationships with a number of a Cuban cigar manufacturers; bear in mind that this was before the Cuban Revolution in 1959 and before all the brands came under the Cubatabaco banner. At one point, Dunhill had a portfolio of Dunhill Selección cigars that offerings from Bolívar, El Rey del Mundo, H. Upmann, Hoyo de Monterrey, Montecristo, Partagás, Por Larrañaga, Ramón Allones and Romeo y Julieta, as well as lesser known brands including Flor de Cuba, Henry Clay, Don Candido and Cabañas. In addition, after the revolution he had the exclusive rights to a trio of brands: Don Cándido, its own Don Alfredo, and La Flor del Punto, as well as a number of Selección Suprema sizes that were produced by those previously mentioned marcas. This catalog page from 1959–60 shows just how extensive the collection was, numbering some 40 offerings.

While Dunhill died on Jan. 2, 1959, he had left his eldest son, also named Alfred, in charge of the business which continued to grow both in the accessories and cigar worlds. While the tobacco branch was sold off in 1967 to become its own company, that new entity began a discussion with Cubatabaco to develop its own line in 1977, with production beginning in 1982. release coming in 1984 and the line being discontinued in 1991 after Dunhill did not renew the contract due to disagreements with Cubatabaco over the cigars from another well-known store, Davidoff.

As Brooks Whittington mentioned in his review of a 1950s Partagás Dunhill Selección Suprema No.281, a fellow by the name of WayneN, a Cuban cigar expert on the International Cigar Club forums, says that:

According to Cubatabaco records, all Dunhill Selección Suprema cigars of various brands and the 3 Dunhill Exclusive brands (Don Cándido, Don Alfredo, Flor del Punto) were discontinued in the year 1982. 1982 was the year the contract for the production of the Dunhill brand was started. (Dunhill cigars were not available for sale until mid to late 1984.)

As for Ramón Allones, he and his brother Antonio created the marca sometime between 1837 and 1845 and became known for being one of the first—if not the first—to use colorful lithographs as part of its box art, bands on its cigars and to adopt the 8–9–8 packaging format, though as has been noted, numerous claims to those firsts have been made.

Dunhill had a total of seven Selección Suprema cigars from the Ramón Allones marca, a mix of handmade and machine made cigars with the largest in both length and ring gauge being this No.69. Interestingly, CubanCigarWebsite.com lists its manufacture as unknown when it comes to being handmade or machine-made, though it would certainly appear to be the former.

The Dunhill Selección name is also one that bears explaining—as it is understood and explained in the Dunhill catalog, the sizes were not unique to Dunhill, but rather they underwent an aging process by Dunhill in addition to receiving some distinctive packaging. Once they arrived in London, they were simply aged for at least 10 months in the Dunhill Maturing Rooms. Other than a little bit of the wrapper missing at the foot, the cigar appears to be in good shape. The wrapper itself doesn’t look like it’s 50–some years-old, certainly if you didn’t know it you might not immediately guess its age. Knowing that, however, the lack of oils and a somewhat matte appearance reinforces the knowledge. Color-wise, it offers a number of unique shades that come together to create a slightly darker than claro shade; just a bit lighter than medium brown. There is a bit of give to it, though I’m certainly not going to be as assertive in checking with this one as I would a current off-the-shelf stick. The pre-light aroma on the foot is almost non-existent, and comparing it to a mild cake donut or even cardboard would require a bit of a stretch. I find myself having to fight myself from finding a note that Brooks Whittington mentioned in another review—more on that in the final notes. With the cap thankfully clipping cleanly off, the cold draw is a bit firm and shows notes of cereal grain and just a bit of sweetness, again mild but more present than what the nose could pick up.

After a gentle lighting with some wood matches, the first puffs on the Dunhill Selección No.69 Ramón Allones deliver a very mild and just the slightest bit sour flavor carried in a thin, dark grey smoke. There is no big bang of flavors, and it takes a few puffs for things to develop enough to generate even the slightest bit of noteworthy flavor which is comprised of some cereal grain and very light wood notes. The ash is an eye-catcher because of how tight it is, with the first crack coming just shy of the one inch mark. The first retrohale is so unlike what one would get out of even the mildest of cigars today, as there is such little pepper that the olfactory nerves get hardly any sensation and the smoke just glides right past them. While staying on the mild side, the flavors add a bit of bottom end to them and become a touch fuller while not bringing up the intensity or delivering a long-lasting finish as the burn lines heads for the second third. The first real noticeable way that I feel the Dunhill Selección No.69 Ramón Allones evolving is in my first retrohale of the second third. While my taste buds suspected the flavor was intensifying a bit, the nose confirmed it, as the smoke is much more peppery and on par with many modern cigars. The draw has opened a bit and the burn line is still razor sharp, the latter of which allows for a bit more airflow and smoke production, which has become much whiter than how it started. The flavors stay very, very subtle, and I find myself struggling to pin them down beyond the previously mentioned cereal and wood notes, though the smoke’s aroma has picked up a bit of warm wheat bread. What is noticeable is that the cigar offers just a bit more oomph with each puff than it did in the first third. I hesitate to call this strength or pepper, but there just seems to be more there. 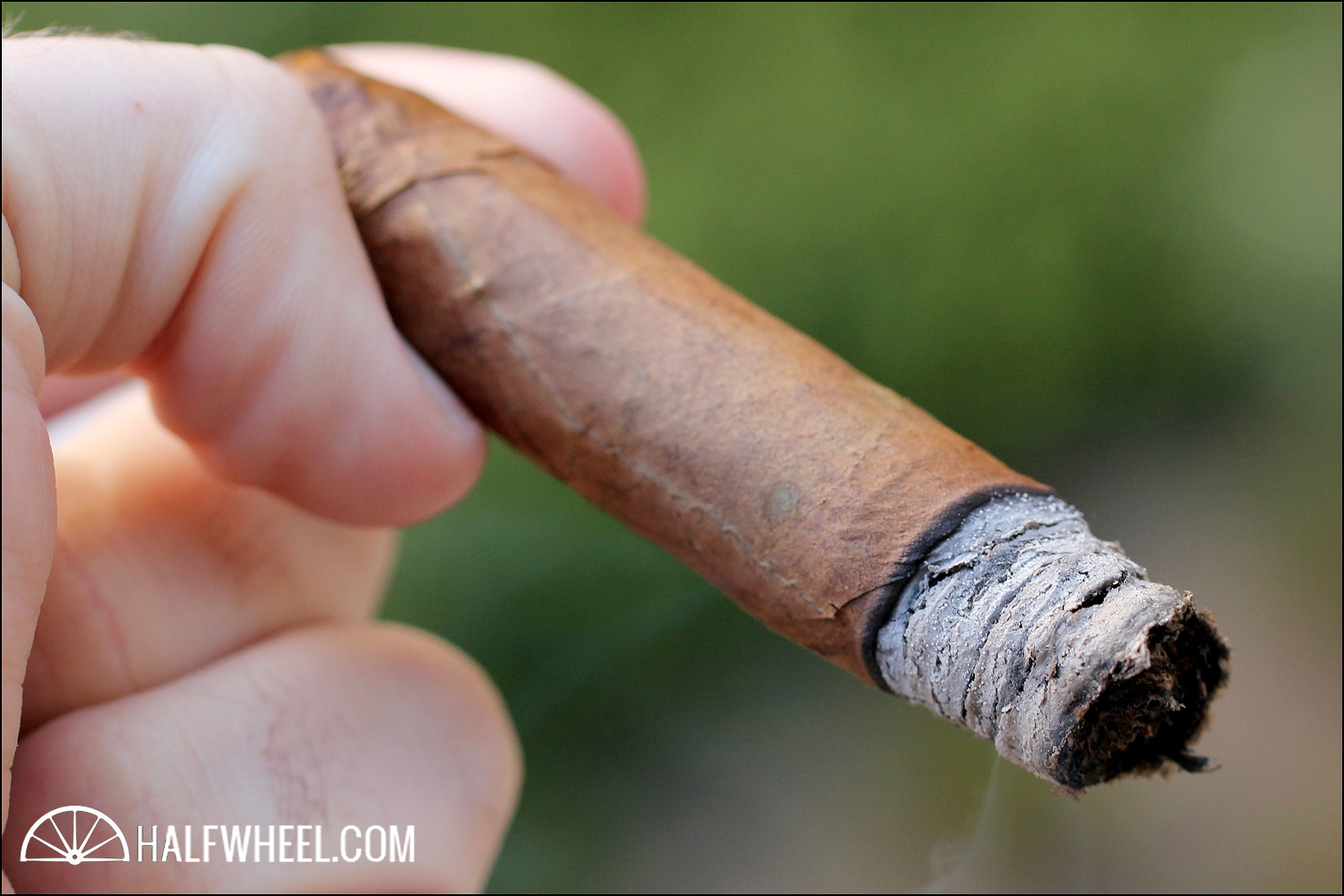 The gradual building of pepper and flavor continues into the final third, with the cigar showing just a touch more pepper and the beginnings of some orange notes. The draw continues to open up as well, providing just a bit more airflow and helping to keep the cigar burning nicely and producing a good amount of smoke. There is still plenty of pepper in the nose while the flavor has evolved to become a bit fuller and nudge the strength up to mild-plus while occasionally stepping into the medium-minus range. While the flavors are enjoyable, they lack a bit of depth and complexity. To say that I want to get every last puff out of this Dunhill Selección No.69 Ramón Allones would certainly rate as the understatement of the year to this point, and thankfully the cigar is accommodating. While it feels a touch sacrilegious to put a draw poker into the side of this artifact, it doesn’t damage the wrapper and the cigar stays cool and enjoyable down to the very end while the smoke builds in creaminess and volume with a bit of simple syrup sweetness coming in during the final puffs. Heading into this cigar, I tried to abandon all expectation and focus more on the process: handling the cigar with care, lighting it evenly and gently and maintaining a clean and receptive palate so that each puff could have the best chance to deliver whatever flavors it might have left in it more than 50 years after its creation. While I was a bit underwhelmed by the mildness of the flavors at first, the cigar managed to awaken itself by the midpoint and be very enjoyable with some decent notes of pepper and sweetness, and as you saw above was able to be smoked down to a length of just a few millimeters. A fantastic example of an incredibly well made and well cared for cigar that has held itself together after more than five decades of rest and performed admirably when its time finally came.