One of the things that seemed to fly under the radar at the 2012 IPCPR convention and trade show was that General Cigar would be manufacturing and distributing Dunhill cigars after they had spent a bit of time at Altadis. The news came out almost right between the 2011 and 2012 trade shows, and when I was walked around the General Cigar booth, it was given a quick mention but certainly didn’t get the amount of attention that the company’s new releases received.

If the journey of Dunhill to General has slipped your memory, here’s a quick recap: the Dunhill name traces its history to 1907, when Alfred Dunhill opened a tobacco shop in London. Cigars bearing the Dunhill name were first sold in 1980, and in 1989 the Dunhill Aged line was started in the Dominican Republic by British American Tobacco (BAT International Ltd.), with production and distribution handled by Consolidated Cigar Corp., which has since become part of Altadis U.S.A., Inc. In October 2010, the Swedish Match/Scandinavian Tobacco deal was finalized, a deal which brought CAO, Dunhill and Macanudo under the General Cigar roof.

In late 2011, production was shifted from Altadis’ Dominican Tabacalera de Garcia factory and relocated to General Cigar Dominicana in Santiago, Dominican Republic. The Dunhill Aged Range, known as the Blue Label, was also updated with a new band and logo that modernized the old script logo.

In the past weeks, news of a new addition to the Dunhill line started to circulate, with the key selling point being that it used some of the oldest tobaccos ever to appear in the brand’s offerings. The new Dunhill Aged Reserva Especial 2003 was built around Dominican filler tobaccos from 2003. In addition to the aged leaves, the cigars were stored for a year in aging rooms lined with Spanish cedar at General Cigar Dominicana, a process that every cigar in the Dunhill Aged line receives.

Here’s what the boxes of the new Dunhill Aged Reserva Especial 2003 look like: 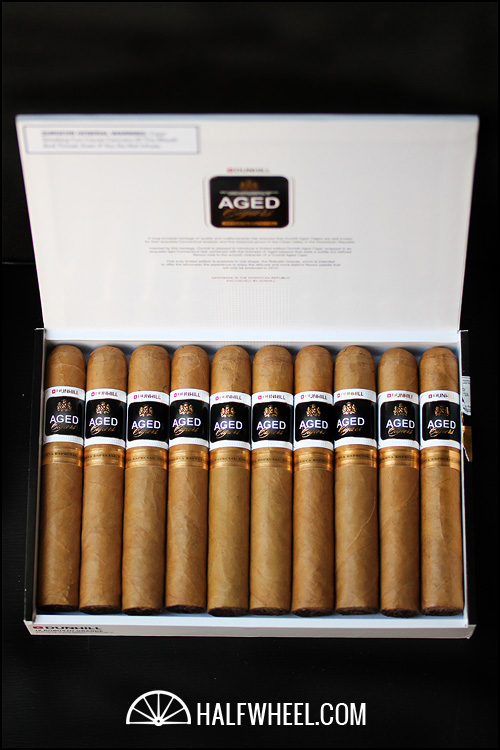 The wrapper is a beautiful butterscotch color, thin, light and delicate but with a fair amount of veins and texture. The cold draw shows notes of honey and cereal, no spice, almost a bit floral at times with a buttery undertone that provides a distinctive texture. The cold draw is easy, fuller in flavor than the aroma with a tangy marinade note, making me think of Worcestershire sauce or some other meat glaze, backed by a cereal grain taste.

The Dunhill Aged Reserva Especial 2003 offers a fairly hearty start to the first third, though quickly mellows out for the bulk of the first inch and a half. While it’s not outright sweet, there are notes of marshmallow and cotton candy that seemed to keep showing up, offering that dry sweetness that comes with those two flavors. It becomes quickly apparent that this is a very mild cigar, and if you’re not paying attention you’ll miss the subtle flavors it has to offer. The intensity of flavors start to build up again after the first ash clump drops off and the transition to the second third begins –  it is surprisingly earthy with a cereal grain note that likes to linger in the nose. Strength is mild at best, with incredibly smooth smoke that reflects the age of the leaves. The second third repeats the dry sugar sweetness that was found in the first third with just a slight bit of underlying wood and cereal grain. While spice or pepper is nowhere to be found on the palate, a bit of light white pepper starts to hit the nose – the first time up to this point where it’s been detected. The final third of the Dunhill Reserva Especial 2003 brings an uptick in strength, caused mainly by the burn line getting closer to the lips. What had been largely grain and dry sweetness have picked up a slightly burnt taste, starting with a note reminiscent of bread that was left in the toaster just a few seconds too many before picking up notes of charred wood. Neither are particularly harsh as the age on the cigars has mellowed out anything that would irritate the throat, but the flavors are not terribly enjoyable, either. The Dunhill Aged Reserva Especial 2003 is a great showing of what aged and well-cared for tobacco can produce: a mild and delicate flavor profile that smokes incredibly well and delivers a classy, elegant smoke with a subtlety that requests your full attention for proper enjoyment. Does it leave a bit lacking for my palate, which tends to gravitate toward fuller-bodied cigars? Yes. Will it likely be overlooked by most readers of this site, either because of its mild strength and/or $15 price tag? Likely, which is a shame. Cigars like this should be in the repertoire of any serious cigar smoker, because while strength and big flavors tend to garner the most attention, there's still a lot to be learned in the kind of subtlety that the Dunhill Aged Reserva Especial 2003 offers.