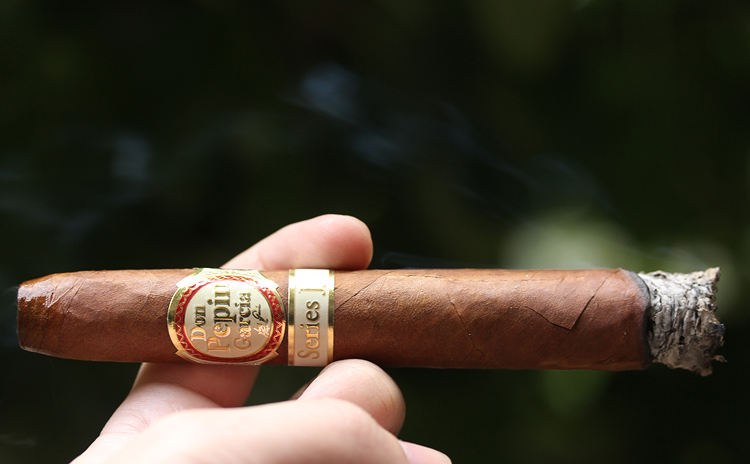 We’ve explained it a few times before, including a year ago when I reviewed the JJ Lancero:

In 2005, the newcomer Don “Pepín” García introduced the Series JJ, a cigar that he worked on with his son Jaime. (JJ comes from their two first names: José and Jaime.) It would quickly become the most popular brand for El Rey de los Habanos, the first of Pepín’s companies.

Freud famously said, “sometimes a cigar is just a cigar.” That’s just not true with the Series JJ. I’m privileged each time I smoke one of the white-banded Pepín creations to have the opportunity to reflect on the preciousness of life and the many blessings I am given. Each time is a few moments to honor the life of someone I never knew, Jeremiah Cruz Jr. Many of you know Jerry Cruz, the fun and loving character at Stogie Review, and many of you know the story of JJ, his Little Robusto. Jeremiah Cruz Jr. was born on July 22, 2007, and three months later he tragically passed away of Sudden Infant Death Syndrome, commonly known as SIDS. You can read Jerry’s post from when his son was born, and about how he smoked his first Series JJ. Then you can read about how fragile life can be in Jerry’s “Final Goodbye” — and then you should take some time before you keep reading this review.

After reflection, you can learn about the immense good in the cigar community. Every year on July 22nd, the cigar smoking community gathers in support of Jerry and his family by smoking a Serie JJ with him. The most recent year raised close to two thousand dollars for SIDS, and you can donate to the American SIDS Institute here. I was privileged to partake last year, and I look forward to honoring Jerry’s Little Robusto again this year. #jj4jj 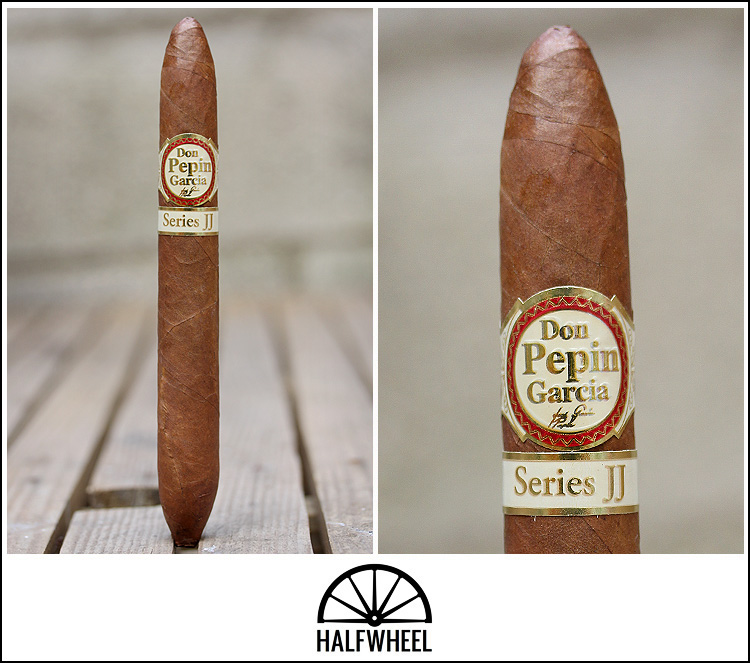 Appearance-wise, it’s stunning. The Nicaraguan wrapper has aged wonderfully and really glistens. While there are a few veins on the somewhat massive cigar, they are difficult to identify given the roll. Aroma from the oily milk chocolate wrapper is a rich sweet thick cocoa and leather with a slight barnyard finish. Despite being packed in now relatively yellow cellophane, the aroma is a bit lighter than I expected. Cold draw from the Salomon is tight with a medium-full mixture of red pepper, sweet cocoa and a touch of citrus.

The first third of the JJ Salomon starts with an interesting mix of meatiness, toastiness, nuts and grass. It’s utterly tight, but the smoke is flowing nicely. After five minutes it clears the nipple portion and the draw opens up to a much more manageable state. Flavor settles to a sweet earth, grassiness, meatiness and a touch of hickory and black pepper on the finish. Already the Series JJ is showing it’s somewhat hidden strength—medium-full, but a soft medium-full. 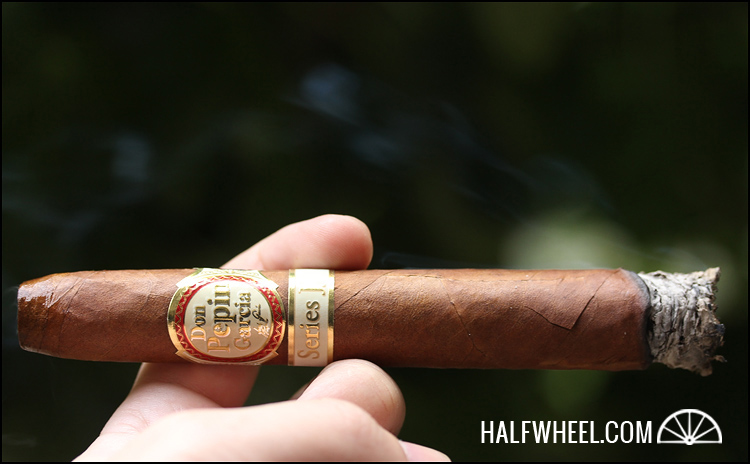 As the second third enters, the smoke production and draw remain at above average states. The flavor adds a bit more pepper up front, but the core remains the mixture of meatiness, toastiness and nuts. With the added grassiness, it reminds you of being somewhat Cuban, although the twang is nowhere to be found. While the rest of the construction is above average, the ash requires a bit of maintenance, nothing big, but it’s a regular task. Strength of the Don Pepin Garcia Series JJ continues to creep up. 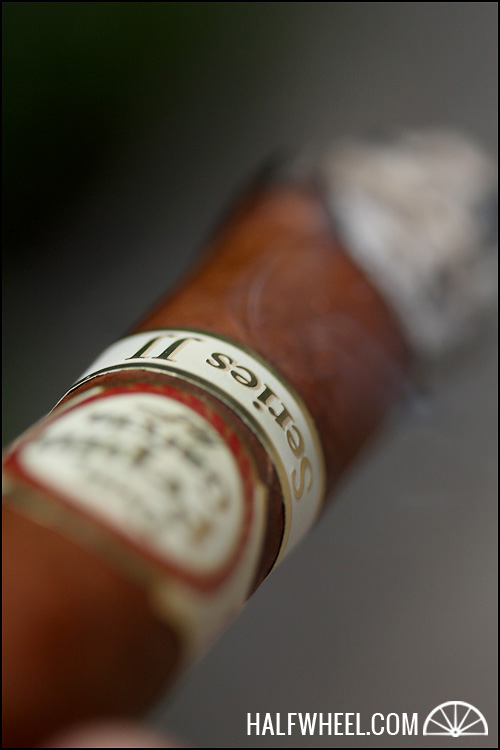 The final third sees the underlying sweetness in the nuttiness disappear. It wasn’t really noticeable through the first two thirds of the Salomon, but once it disappears it becomes noticeable. Once again, it’s subtle changes. There’s a bit of a dark cocoa note that emerges, but it’s far from the cold draw of the first third. I smoke it until it gets hot, which takes place around the one inch mark after I purge the cigar. It was the only time I went out—I suppose it was a sign. 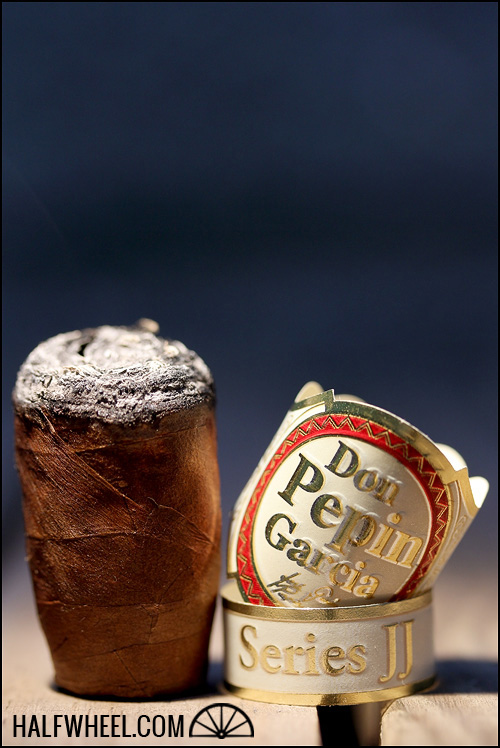 The Bottom Line: For the most part, I have loved the early Series JJs. The Lancero is still smoking absolutely sublime right now. I think the tobacco was just better back then and in both the Robusto, Belicoso and Lancero formats—the cigar is one of Pepín’s all-time best. That being said, this was underwhelming. I was really hoping for the complexity and balance so elegantly shown in the older Robustos and Lanceros and it just wasn’t there. The flavor is good, developed and clean—but the changes are few and the blend just doesn’t provide too much excitement. Ultimately, that’s not what it’s about. For a little over two hours, I got to sit down with a good cigar and reflect. There is a score, and some thoughts about what the cigar tasted like, but every July 22nd—that all seems rather irrelevant. #jj4jj