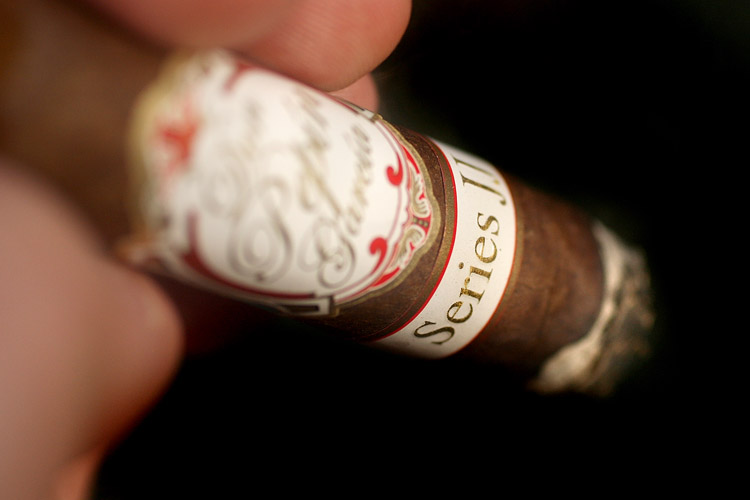 On Dec. 11, 2011, Jerry Cruz of Stogie Review fame announced a limited run of Don Pepin Garcia Series JJ would be produced in a never-before-seen vitola. Dubbed the Little Robusto, it is a 4 /12 x 50 Short Robusto made in honor of Jerry’s son, who died of SIDS (Sudden Infant Death Syndrome).

“Little Robusto” was the affectionate nickname I gave my son JJ. Sadly, JJ passed away on November 2, 2007 from SIDS (Sudden Infant Death Syndrome) while at daycare when he was just 3.5 months old. When JJ was born, the first cigar I smoked to celebrate his birth was the Don Pepin Garcia Series JJ. A cigar blended by father (Jose Pepin Garcia) and son (Jaime Garcia) team at My Father Cigars. Even though JJ isn’t with us anymore, I still celebrate his birthday. Every July 22nd, I light up a Series JJ just like I did when he was born. Many of you have joined me every year and so, Smoke a JJ for JJ Day was born.

In 2010, for Smoke a JJ for JJ Day, my good friend Barry from acigarsmoker.com and others raised money for SIDS. It was a such a popular social media event that it caught the attention of My Father Cigars who joined and participated, even matching the money that Barry and others raised. This was the beginning of The Little Robusto Project. From retailers to bloggers, many had a hand in this and I’m really not sure whose idea it actually was but there was enough support for My Father Cigars to make a special “Little Robusto” version of the Series JJ to raise money for SIDS.”

Only 300 boxes of 24 cigars were produced (7,200 total cigars) in only one size, a 4.5 x 50 Short Robusto with a Broadleaf Maduro wrapper, Nicaraguan binder, and Nicaraguan Corojo and Criollo filler. Although the actual percentage of money sent is left up to each individual retailer, the amount that is sent from the sale of the cigars goes to two different charities: The Center for Infant and Child Loss and First Candle.

The boxes for the Don Pepin Garcia Series JJ Little Robusto look like this: 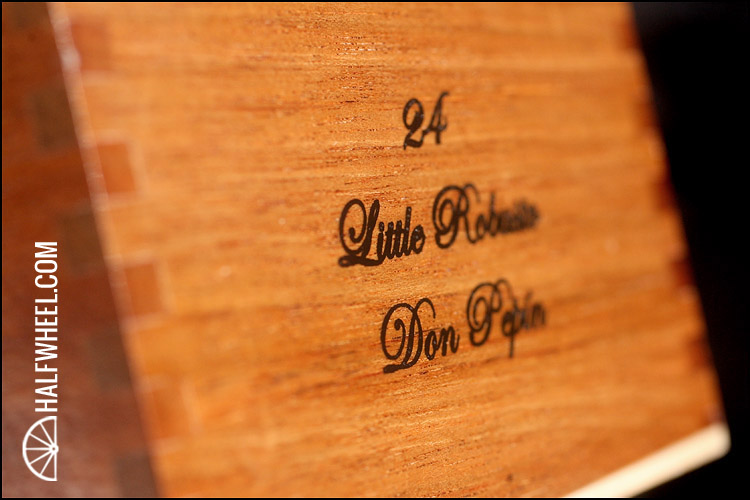 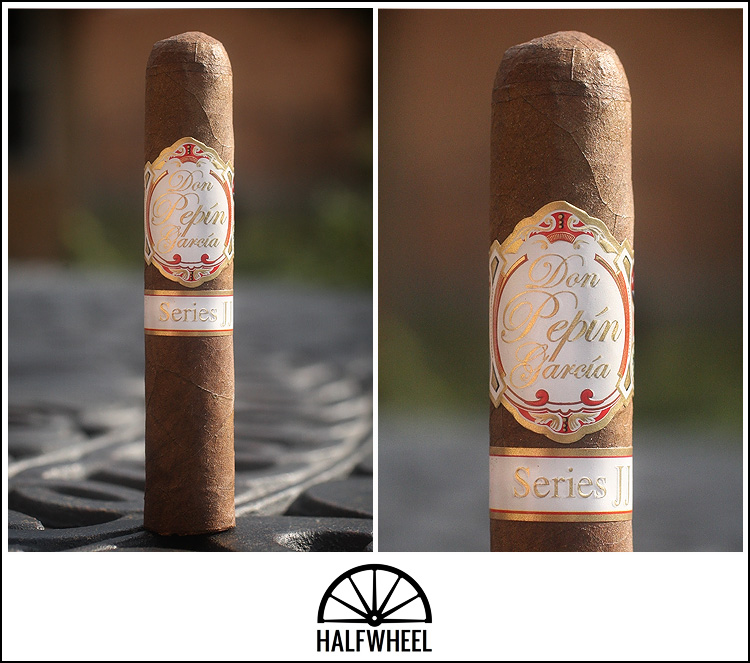 The Little Robusto is a good looking cigar, with a wonderful cinnamon brown wrapper that is smooth to the touch. There are no veins visible on the length of the cigar and seem to be no imperfections at all on the cigar. As with most My Father cigars, there is a nice triple cap and when squeezed it is just short of rock hard. The wrapper smells strongly of dark chocolate, cedar, leather and a bit of a fruit note I can’t place.

The first third starts with some very strong and distinct notes of dark chocolate, coffee and leather, along with a nice amount of spice on the tongue and the perfect amount of black pepper on the retrohale. There is some sweetness present in the background of the Series JJ and while it is nonspecific flavor-wise, it is quite noticeable and enjoyable. The draw is perfect, but the burn is sometimes a bit off, just enough to be somewhat irritating. Strength is a mild medium to start, but seems to slowly be getting stronger. 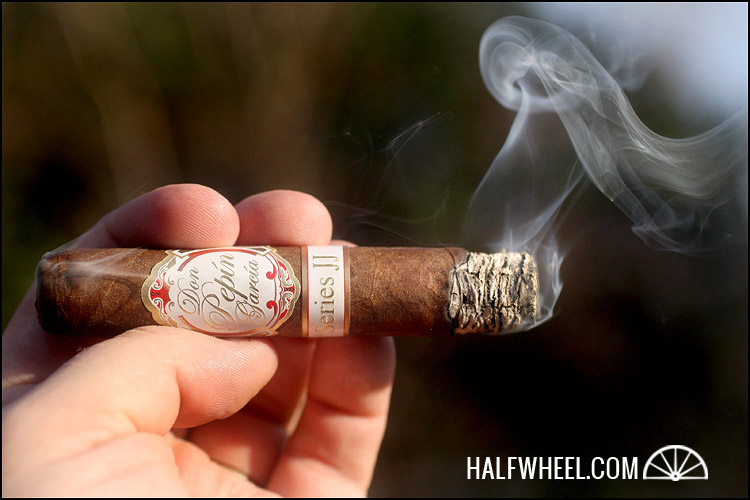 Coming into the second third, the flavors mellow out a bit and the sweetness takes a larger roll in the profile. The spice and most of the black pepper from the first third are almost totally gone, although the main flavors are still there, just in a more muted role. Burn of the Little Robusto has corrected itself and the draw is still perfect. Once again, strength-wise, it is a mild medium at best. 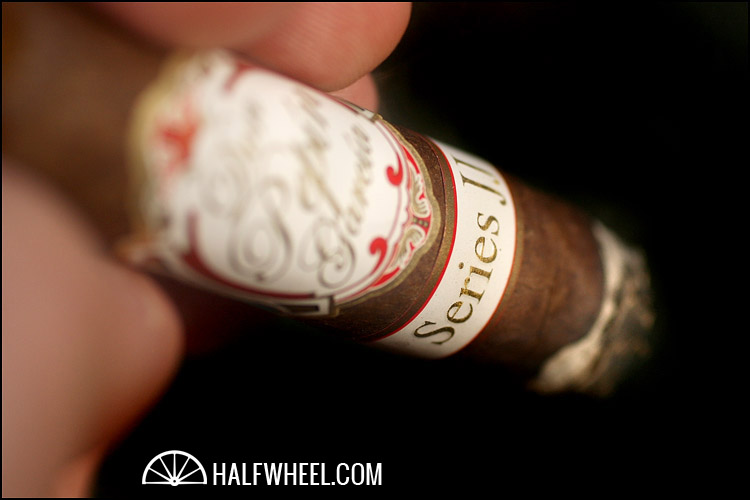 The final third of the Little Robusto stays the course profile-wise with dark chocolate, earth, espresso and leather remaining the core flavors. There is still almost zero spice or pepper, even on the retrohale, and the sweetness has begun to die down. The burn continues it’s Jekyll and Hyde routine, almost perfect at some points and very wavy at others. The JJ ends strength-wise at a solid medium and easy to nub avoiding getting hot or bitter. 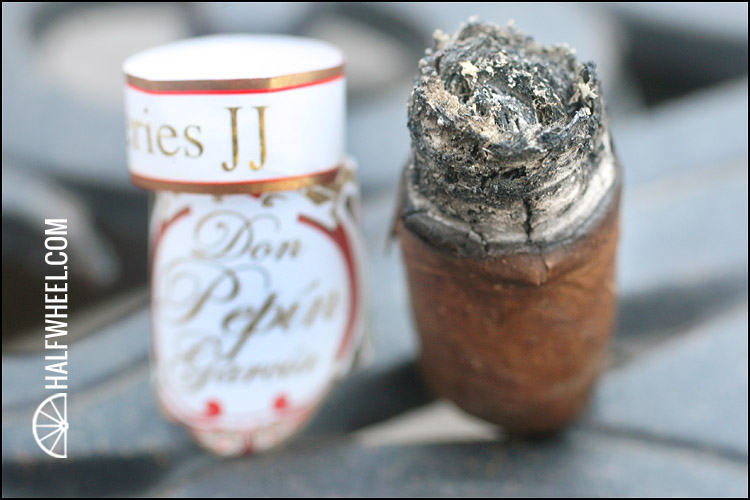 When I heard that these were being made and where some of the money paid for the cigars was going to, I really was proud to be a cigar smoker. This was a great project that came into being after a horrible event and I give credit to the García family, Jerry Cruz and anyone who helped make it happen. Having said that, the cigar itself is pretty much what I expected it to be with classic DPG flavors and notes, although there was a bit more sweetness in the profile then I expected. I loved the vitola and the draw, but be aware that the burn seems to need a bit of help at various times during the smoke. While not the most complex of cigars, I enjoyed it and I think anyone who tries them will enjoy them, especially considering that it helps a great cause, it is a somewhat unique blend, a nice size and you can get a box of 24 for just under $145.