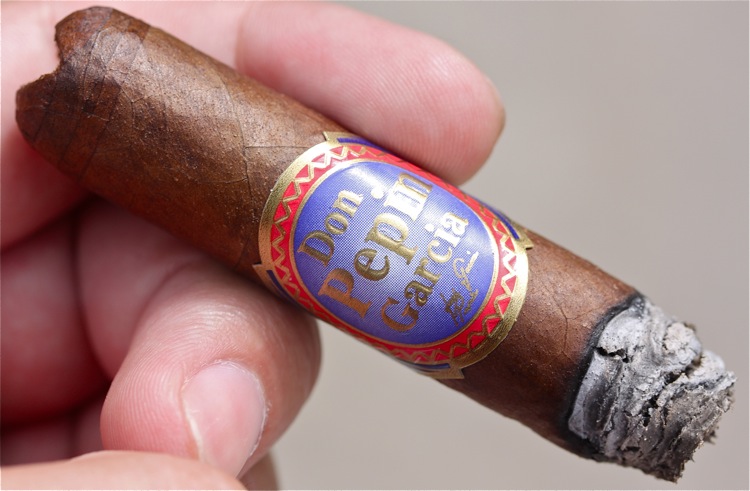 The Blue Label is the only offering from the Holiday Lancero Sampler to be available in another form, or so we think. I’ve had a few of the Puff n’ Stuff, but haven’t been able to compare them directly to those in the sampler. (This review is one out of the sampler.) Given the timeline (which is explained after the jump), it would seem logical that these would be in fact the same cigar, but who knows. The Puff n’ Stuff Lancero is regarded as one of the most sought after El Rey de los Habanos/My Father Cigars releases of all time, particularly given that for years Pepín released few Limited Editions, so there’s at least a bit of intrigue here. Anyways, after the jump, the first of five Pepín Lanceros to be reviewed today. 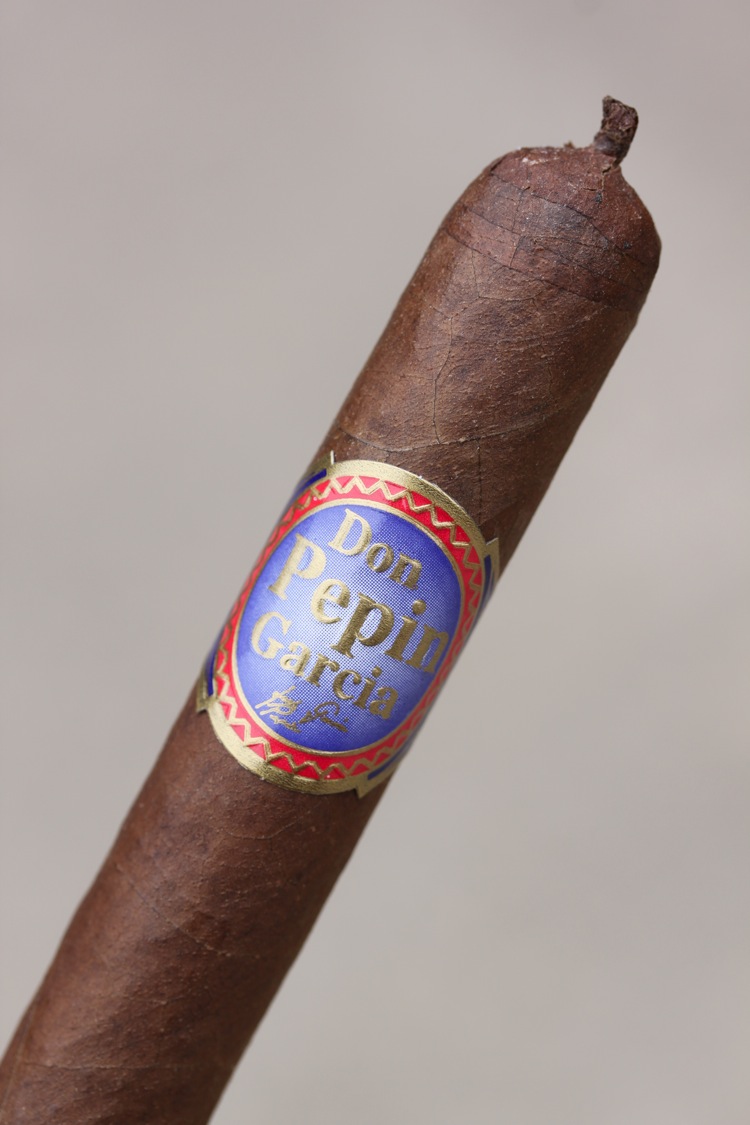 The Story
Here’s what I wrote in the “Lanceros Collection by Don Pepin Garcia” post:

The only cigar to be offered as a regular production Lancero, just in a different size. The Fundadores is the regular production “Blue Label” Lancero, but it measures a traditional 7 1/2 x 38. The cigar (6 7/8 x 42) was however released in two other batches for Puff n’ Stuff of Decatur, GA. There were a total of 250 boxes of the Blue Labels for Puff n’ Stuff made, although 50 of the 2008 batch were sent back for draw problems. (Presumably these are the same cigars, but that’s not been confirmed.)

The Blue Label was the first cigar from El Rey de los Habanos to bare Pepín’s name. Originally manufactured at El Rey de los Habanos in Miami, then Tabacalera Cubanas S.A. in Nicaragua and now at My Father Cigars S.A. in Estelí, these cigars are oftentimes overlooked because of their aged and simplistic bands, but that’s probably a mistake. (The 6 7/8 x 42 Lanceros were made only at Tabacalera Cubanas S.A., just for clarification purposes.)

As you’ll notice with every cigar that comes from the Lanceros Collection by Don Pepin Garcia, there’s a distinct almost Montecristo Edmundo (a cigar from Cuba) shape to the top. Wonderfully applied hybrids of a triple-cap and a pig-tail, although not as pronounced as on the My Father No. 4. Not the darkest of Corojo wrappers, but it’s got tons of oils. The tobacco’s name is Corojo Oscuro, but this isn’t exactly what I’d imagine it to be: relatively veinless, not that dark, etc. Aroma from the Nicaraguan wrapper has a sweet brownie cocoa with a little bit of pepper on the medium profile. Construction is good, with the exact amount of resistance one would expect from a cigar; but, these are notorious for being plugged. From the foot there’s a thick milk chocolate, grassiness, butterscotch and an almost acetone leather-like note, odd. 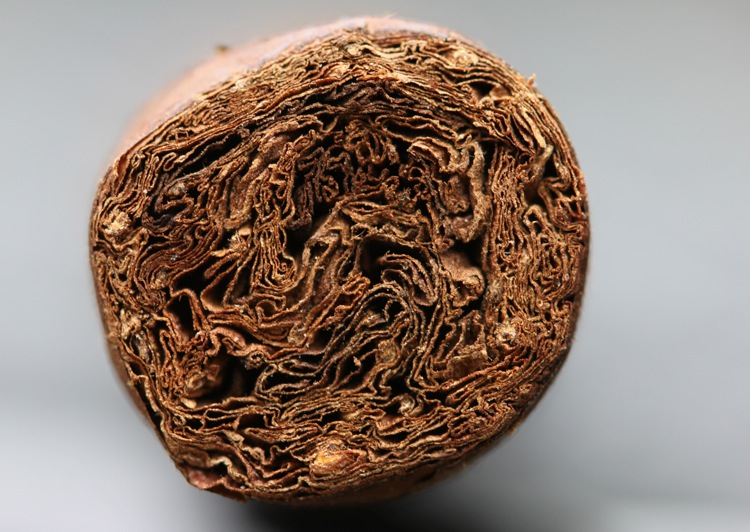 Lighting
Get used to the v-cuts. From the head, there’s pepper, leather and earth. It’s full, it’s refined and it’s a bit scary. Cold draw is tight, real tight, closed to plugged. This has been a consistent problem with the Don Pepin Garcia Lanceros and I’m a bit unsure why. As you will read later on, none of the other Lanceros from the sampler have had this problem, but the Blue Label is notorious for the draw woes. Flavor is lots of fruit, sour earth and caramel. Lighting the Pepín Lancero produces some toasty earth notes on what looks to be a storm-ridden North Carolina day. First draw is a struggle, tight with little smoke: deepening cedar, bits of spice and leather with cedar and black pepper showing themselves on the medium-full and lengthy finish. 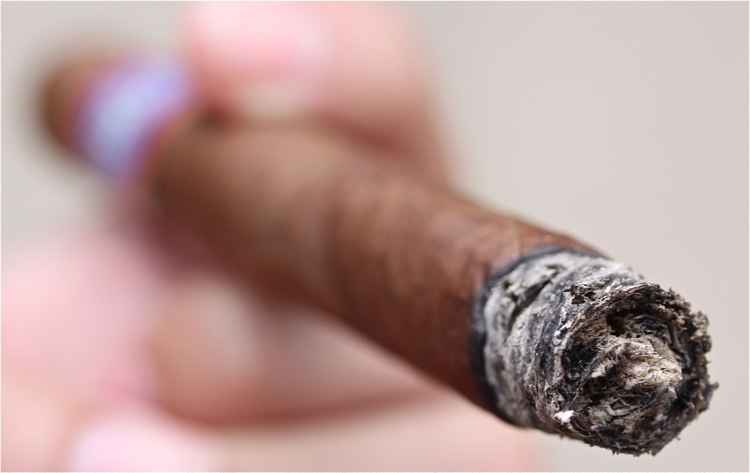 First Third
It becomes pretty apparent that nursing this cigar is going to be a necessity if I don’t want to reach for the draw tools. My aversion to messing with the cigar is that from a smoke production standpoint, the cigar is fine; from a burn standpoint, the cigar is fine. Draw? It could be better. The Blue Label Lancero has a rather spicy cedar core thanks to lots of black pepper on top of some dried fruit and earthy nots. Finish is dominated by the black pepper with aged tobacco and sour earth also making appearances. It’s medium in strength, medium-full in body; but improving. 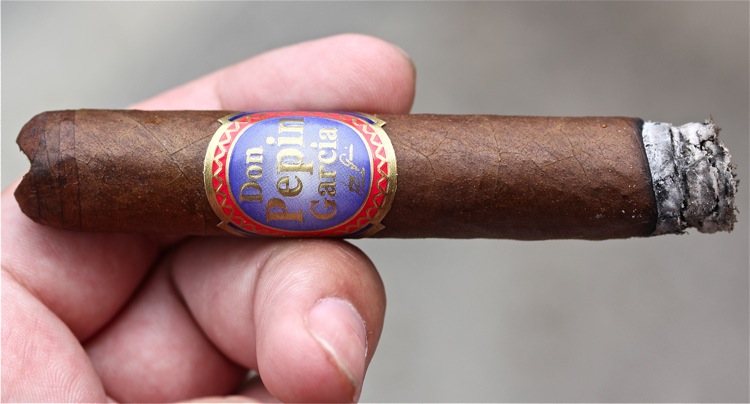 Second Third
It’s a sweeter toasty cedar that initially sees a lot less pepper, but as the halfway mark approaches, pepper skyrockets. Finish is longer with developing cedar and earths joined by lots of herbal grass. Construction for the Blue Label Lancero is better, but the draw is still tight. Smoke production increases slightly, but the draw is still the focal point of attention. Strength increases a bit, with the DPG Blue Label now hitting its stride in full-bodied nature. The medium-dark ash isn’t the great in terms of holding in length, but it’s at least consistent enough so that you can easily knock it off.

Final Third
I seem to remember these having a lot more pepper than they have had of late in the final third. The sweetness is just sort of missing something. It’s a sweet cedar, bits of cocoa, vanilla, butterscotch and even some taffy like sweetness, but the pepper is noticeably gone missing the contrast. I definitely don’t mind the lack of pepper, as it allows the sweetness to really come out, but things are definitely different. Fortunately, a quick retrohale brings plenty of pepper to the mix, so all is not lost. The draw loosens a bit, but the Blue Label is still plagued by poor construction. medium-full in strength, full and body and with above average smoke production, it is by no means a struggling cigar.

For the Novice
No? It’s too strong, too full-bodied and a bit too much flavor. The band might look simple, innocent and harmless; but for a new smoker this might be too much of a punch. 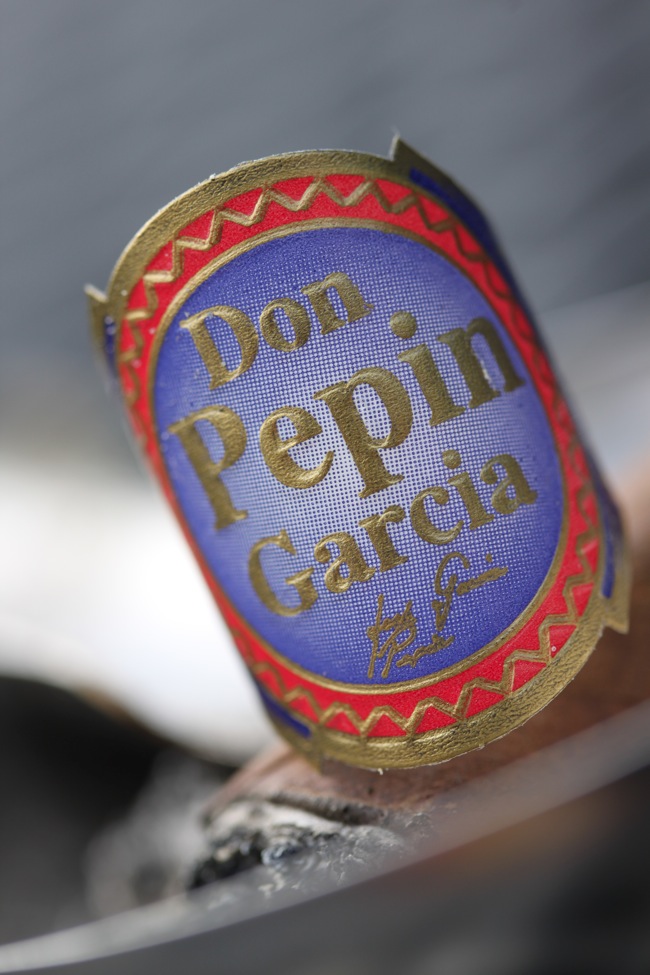 In the End
These are getting better flavor-wise, but it’s hard to judge the crapshoot that is construction with the Don Pepin Garcia Lanceros. A plugged cigar is one of the worst attributes for a cigar, so trying to recommend something that has a reputation for construction problems is a bit difficult. The Blue Labels are definitely worth a shot, and when construction is good, these are a joy. Utterly balanced and really coming into its own. That being said, I still can’t figure out why these have so many problems, as opposed to the other four cigars made at this size, which seem without them. The obvious explanation would be the blend, but I just can’t believe that explains the fairly drastic construction differences.

86. It’s a very good cigar absent the construction woes, but giving the Blue Label that moniker just doesn’t seem right with the problems.