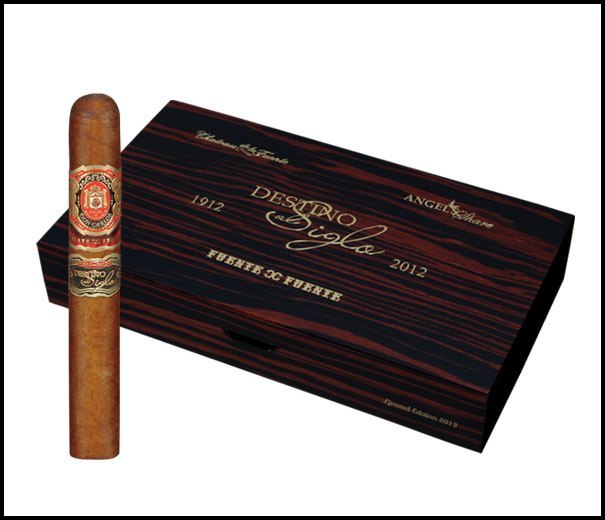 The always excellent Vitolas.net has the history of the first release in 2006:

Originally sold only with the 2006 Prometheus Don Carlos Edicion de Aniversario humidors, 90 cigars per humidor, 100 humidors ever made, the price of these cigars includes the “humidor tax,” since in order to purchase the cigars, you have to purchase the humidor as well.

These cigars are not just Don Carlos cigars with a different wrapper; they consist of a distinct blend that was created by Carlos Fuente Jr. to honor the 30th anniversary of his father’s creation of the Don Carlos line of cigars.

This is not a regular Don Carlos cigar. It’s a special version of his cigar that I am making in tribute to my father, but made ‘Carlito’s way.’ It’s a little spicy with a silent undercurrent that, if you’re not careful, is going to knock you off your feet. Personally, I can give you a hint: it has a Dominican wrapper rather than the regular Don Carlos Cameroon leaf.

In May of 2012, Prometheus released multiple sizes and years of the Don Carlos Edición de Aniversario:

The boxes that the Don Carlos Edición de Aniversario Toro 2007 come in look like this: 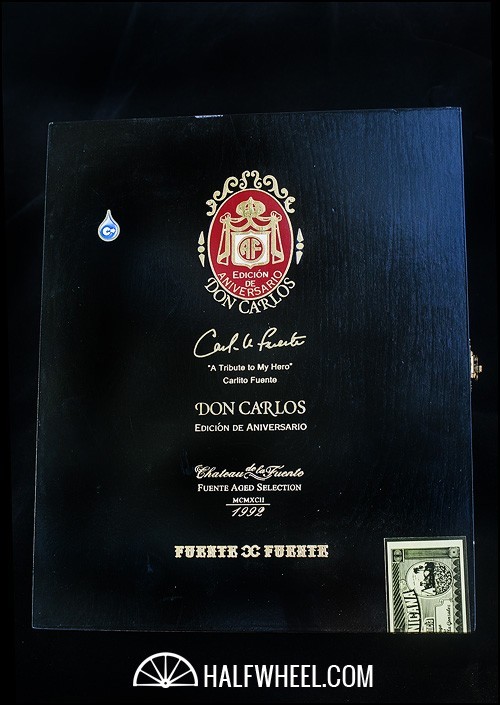 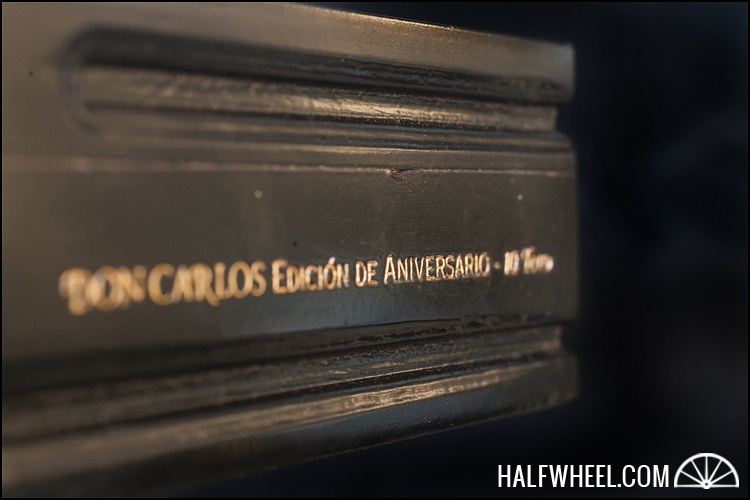 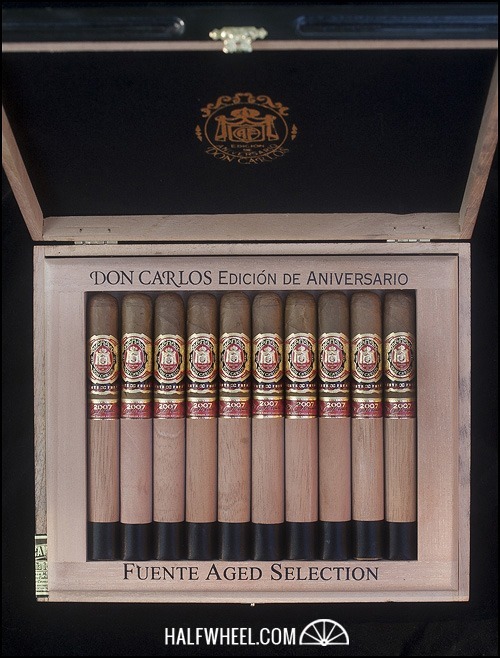 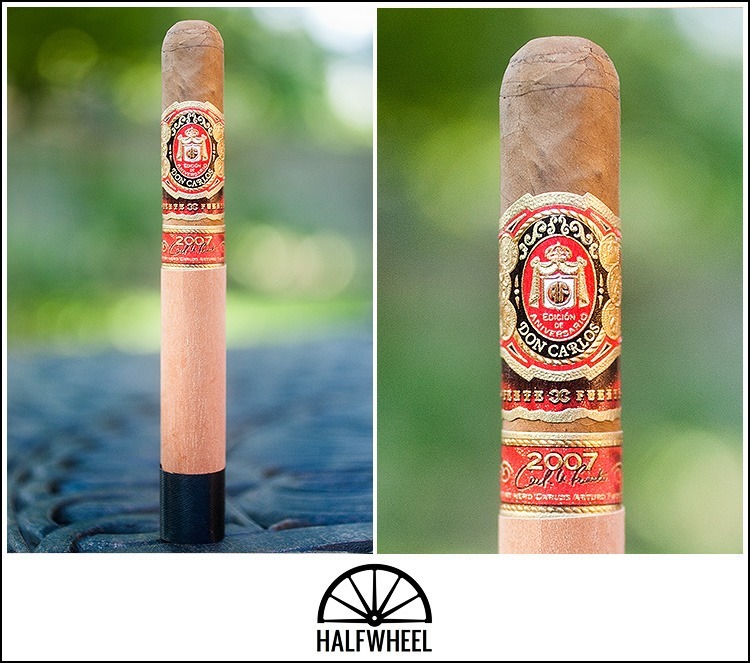 The Don Carlos Edición de Aniversario 2007 Toro is gorgeous with a spectacular honey brown wrapper that is exceedingly smooth to the touch. There is a slight box-press evident and a perfect amount of give when squeezed. While the triple cap is wonderful, and there is almost no oil present at all. There is not much aroma to the wrapper, perhaps a faint sweet raisin and cedar, probably due to cedar wrap.

The first third of the Don Carlos starts out instantly with a wonderful creamy base, along with notes of sweet cedar, raisins, slightly bitter coffee, cinnamon and a touch of leather. There is almost no spice at all on the lips or tongue, but there is a really nice black pepper kick on the retrohale, just enough to intensify the flavors without overwhelming the profile. Smoke production is excellent, white and dense. Construction is good for the most part, with a perfect draw, but the burn is a bit wavy during the first third. Strength starts out as a mild medium — and while it is getting stronger — it is not going anywhere very fast. 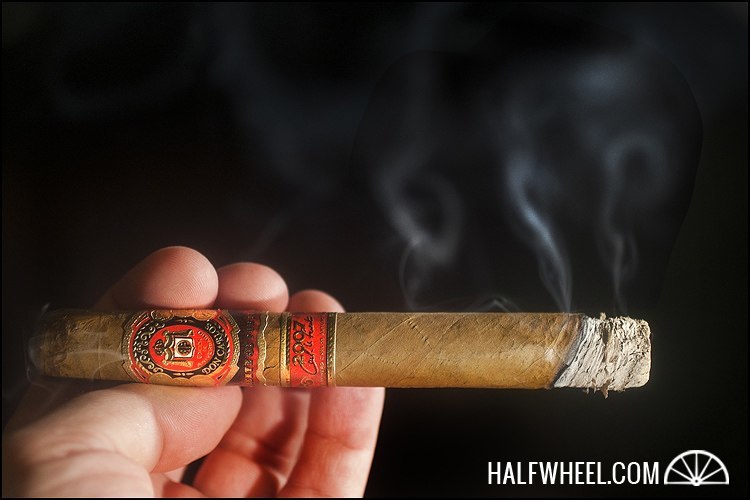 Coming into the second third of the Don Carlos and the profile shifts quite a bit. The base is still creamy overall, but the sweetness has morphed into more of a bread-like graham cracker note, although there is still has some strong cinnamon, cedar and light coffee flavors, as well as some slight earth. There is a very nice flavor that I can’t quite place that is driving me crazy, but whatever it is, it is wonderful, and really makes me pay attention. The pepper on the retrohale has remained fairly consistent as well. Construction remains excellent, and the strength is a solid medium, but there are times when I notice it more than others. 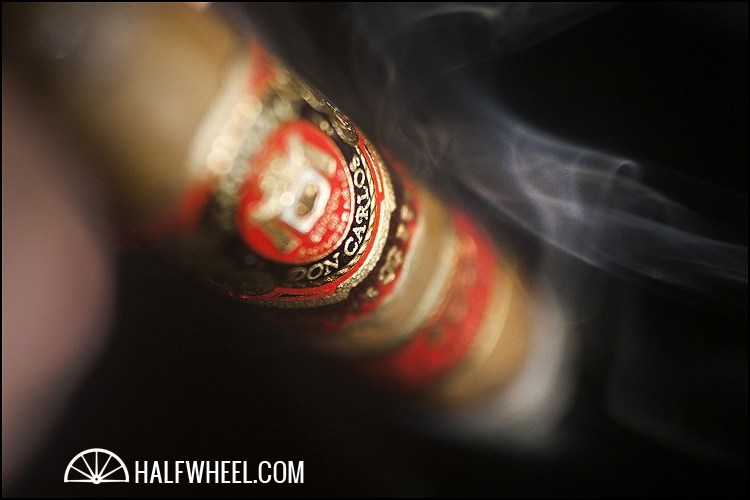 Starting off the final third and the profile shifts again with a very unique flavor taking over, something I have never tasted in a cigar before. The flavor is a distinct note of honeycomb: sweet, waxy and musky, like you would eat out of the hive. There is still some nice black pepper on the retrohale along with just a touch of spice on the lips, and other notes of espresso, earth, nuts and leather combine to make a great ending. The burn and draw continue their excellence, and while the strength does sneak up on a me a bit at the end, it never gets into the full range, ending the cigar at a strong medium. To me, this is a prime example of a cigar that is worth the almost obscene amount of money that is charged for them. Extremely rich, complex, unique and distinctive flavors with a profile that changes nicely during the smoke, some nice strength and very good construction. In fact, one of the only negatives I have is the burn, which while never overly problematic, never evened up on some of the samples, and I was forced to correct it a few times. Is it expensive? No doubt. But in my opinion, everyone needs a celebration cigar every once in a while. This is definitely one of those cigars everyone should splurge and buy at least once, if only to see what an ultra premium cigar should taste like.