One of the many widely-expected predictions for the 2013 IPCPR trade show and convention was that there would be many retailers with their own cigar brands. There was of course Sindicato, on a smaller-scale Viva Republica and Emilio both had booths that were not present in Orlando last year and then there were others, like Dissident Cigars.

The brand’s official stance is that its principals are “gweedo c” and “red_ryan.” Legally, the brand is owned in some part by Gorden Crippen of  The Humidor Cigars & Lounge in Wichita, Kan., although Dissident was very clear that they are two completely separate businesses. While there was no booth, Dissident Cigars effectively launched at the 2013 IPCPR trade show.

According to the company’s website, the name was chosen for a very specific reason:

There were two different cigars handed out: Soapbox and Bloc. The former will has begun shipping to accounts and should be arriving early next week, while Bloc is being slated for a potential October release. The actual descriptions of the blend components of the two are very similar, but Bloc uses a higher priming, which creates a different taste.

As for Soapbox, there are three sizes, they are:

Crippen—presumably “gweedo c”—told halfwheel the reason behind the name “Soapbox” was that it was the place dissidents would go to rant, rave and tirade, the “starting point for any good person that’s trying to fight for something.”

There will be around 200 boxes of each size made in 2013, meaning a little over 10,000 total cigars. The company is shipping to five stores now with a goal of about 30 accounts by the end of the year. 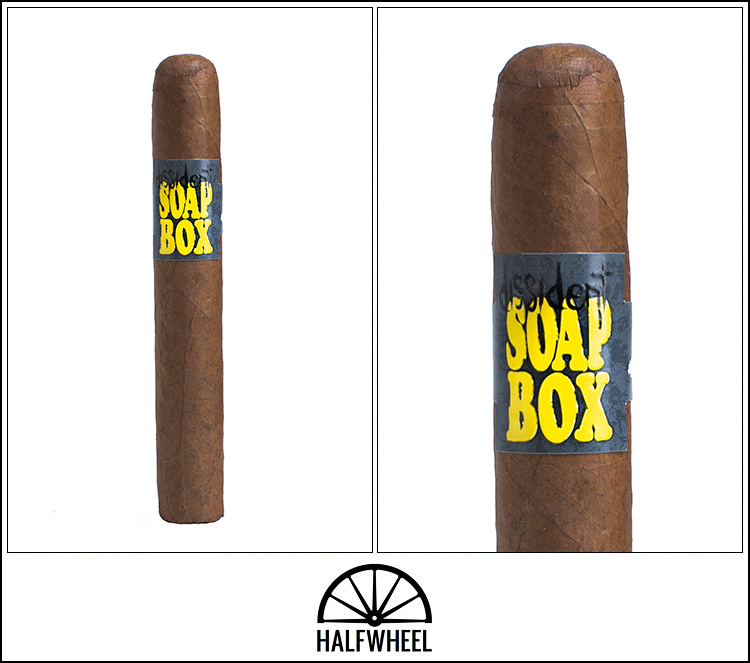 You can tell the wrapper is Nicaraguan just by smelling it: sweet leather, red pepper and then roasted cocoa and red pepper notes from the foot. The Soapbox is average in appearance other than the abnormal band. A clean roll with no concerning tobacco features, but not a whole lot on the cigar itself standing out. The Jalapa wrapper is incredibly soft to the touch, something a bit unexpected. From the cold draw there are dominant cookie dough notes with some slightly grassy notes underneath. There’s actually very little chocolate and only a touch of pepper, which was a bit odd given their presence in the aroma.

The Soapbox starts the first third with some toasted notes, red pepper up front and a rotting cedar note. It’s defined, but elementary. One interesting note from the start is the density of the smoke, which is quite heavy. A few puffs in and the pepper makes itself known becoming almost toxic through the nose, but eventually the Dissident balances itself out. It develops a core of caramelized sweetness, a more pleasant cedar, quiet pepper notes and a bit of creaminess on the retrohale. While the burn is not perfect, the smoke production is plentiful, the draw is fine and the smoke stays cool. By the beginning of the second third, I’ve come to grips with how slow this Nicaraguan puro is smoking. The cigar itself is slightly sweeter with a candied chocolate note and dashes of red wine on the finish. It’s really a progression, more than shift, but it does change the profile quite a bit. Elsewhere, the Soapbox continues to provide a full smoking experience in all three categories and construction remains fine, sans the burn which needs touch-ups. 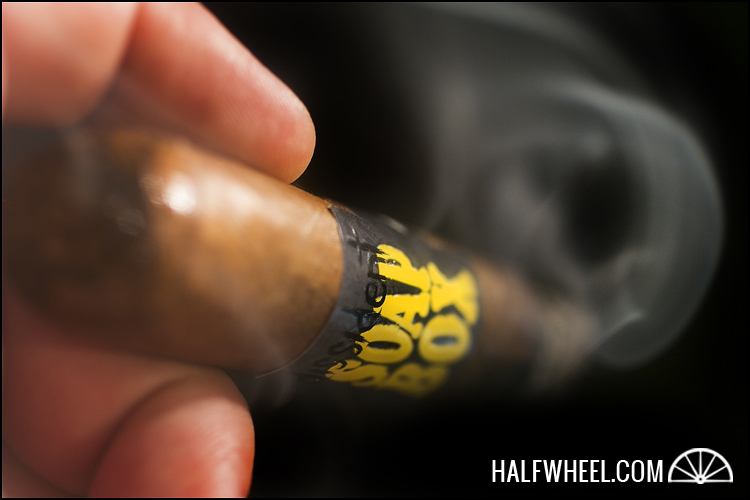 There is a pretty dramatic shift in the final third with the cedar note giving way to a dry bitter cocoa, upfront creaminess and the toasted notes from the earlier third. The flavors are definitely the least developed at this point of the cigar, but given how crisp and defined they were for the first two thirds, it’s not a major problem. This was not the best cigar I smoked at IPCPR 2013, but this is a solid cigar and a good freshman release, a really good freshman release. For the first two thirds, the flavors were rather developed, bold and enjoyable for me to not mind the slow burn rate as much. Construction could be a tad better, pricing could be slightly more reasonable and the Soapbox could burn a bit quicker—all for my tastes—but if you are looking for a cigar with strength that tastes quite a bit different from the typical Nicaraguan powerhouses, the Soapbox does this really well. The packaging is not for everyone, the cigar itself is not for everyone, but for me, Soapbox is a solid cigar.