D’Crossier may not be a household name in the cigar industry, but it is a brand that has been slowly trying to build a name for itself in recent years. The brand is the product of Miami-based Pure Aroma Cigars, Inc., a corporation that imports and distributes cigars from Costa Rica.

Pure Aroma Cigars is headed by Isaias Santana Diaz, who describes himself as a “ordinary family man, embraced by the love and passion for premium cigars.” He was born in Havana in 1973 and quickly became enamored with cigars in his native land. After time in Sweden, he arrived in Miami in the United States in 1995 and shortly thereafter became a citizen.

Diaz’s inspiration for the D’Crossier brand traces its roots to his great-grandfather, Francisco Crossier, a French winemaker who found himself on a journey to North America looking for seeds to renew his vineyards. As Diaz puts it, “the law of unintended consequences dictated he should arrive on the beautiful island of Cuba,” and it was there that he found and became enamored with the Cuban tobacco that made its way into his smoking pipe. In his diary, which remains in Diaz’s family, he writes that “the Pinar del Río Valley is a giant humidor all by itself.”

While the Crossier patriarch intended to return to France, he became enamored with the treasures of Cuba and remained there, learning the Spanish language and way of life. He transferred his agricultural skills from grapes to tobacco, as well as expanding into sugar cane and local real estate.

Diaz’s first venture into the cigar world came when he was just 17 years old; in 1990 he found and read his great-grandfather’s diary, saying that “my heart and soul were touched and I was transformed.” He tried to roll his first cigar shortly thereafter, and after realizing how challenging the process actually is, vowed to complete his great-grandfather’s legacy by crafting a truly great cigar.

For Diaz, the D’Crossier brand “embodies excellence and is crafted using a time-honored family recipe that dates back to the 19th century. He says that “Francisco Crossier’s legacy lives on within our family and through these cigars.”

While the cigars have long since sold out, Diaz reached out to halfwheel with an offer to sample the Robustos, which he had kept stored in his private humidor. The Robusto vitola comes in packaging format that is different from the other brands, and Diaz seems to have a soft spot for the packaging used. “I’m a big fan of the Cuban maso form – five cigars, then six cigars, then another six more, five and finally three cigars to make a 25 count box. Back in my day, 1989, the Robusto was the most successful of the Cohiba sizes, they were packed this way, and somehow my mind and soul are always on the island,” he says. 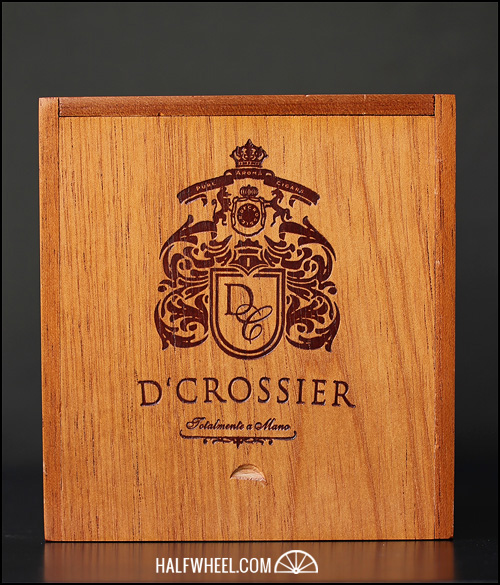 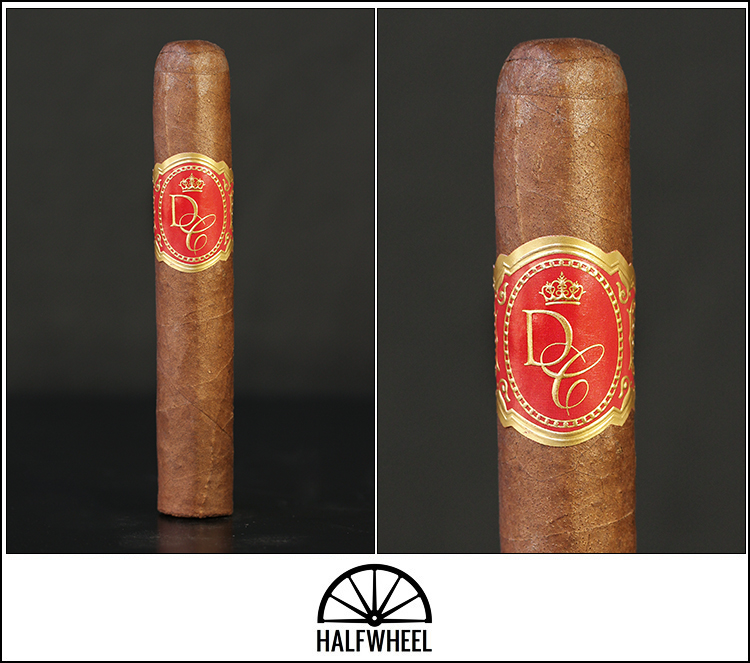 The D’Crossier Diplomacy Series Limited Edition 2008 has a uniform medium brown color to its wrapper with a bit of tooth and just a few veins. The seam line is visible but not distracting and the cap looks to be applied with a fairly good level of skill, though it’s not perfect, occasionally looking to be pressed flat as opposed to having a more pronounced shoulder. What firmness there is to be found in the roll is right under the band, as the rest of the cigar has a bit of give to it. I’m a bit surprised by the minimal band, with only a stylized DC and the phrase hand made included. The pre-light aroma offers notes of fruit cocktail with a particular note of green apple standing out in one cigar and banana in another. There was just a slight amount of detectable spice or pepper, though it wasn’t consistent from cigar to cigar. The cold draw skewed toward the tight side, as two cigars had just a slight bit of resistance while another was downright firm. There wasn’t a ton of flavor notes offered on any of them; what did stand out were repeats of what was found through the nose: fruit cocktail, green apple, and a very faint wood note with little spice or pepper. One thing that’s noticeable about all aspects of the cigar prior to lighting is that it feels a bit dry – the tobacco on the foot feels sharp and dry, while the cold draw seemed to dry out my lips almost immediately.

The D’Crossier Diplomacy Series Limited Edition 2008 Robusto is billed as a mild cigar, and it lives up to that billing in the first few puffs. It’s a very gentle introduction with some soft notes of sweet wood in the smoke and just the faintest touch of pepper that makes a very gradual entrance to the equation. The first third of the cigar seems to be where it shows its age most – while there is some flavor, it is by and large muted. An aromatic of oranges starts to come out as the transition to the second third begins, with an uptick of pepper and wood that is noticeable on the palate coming along shortly thereafter. The technical performance has been very good, with a sharp, even burn line and dark grey ash that holds on in inch-long clumps. 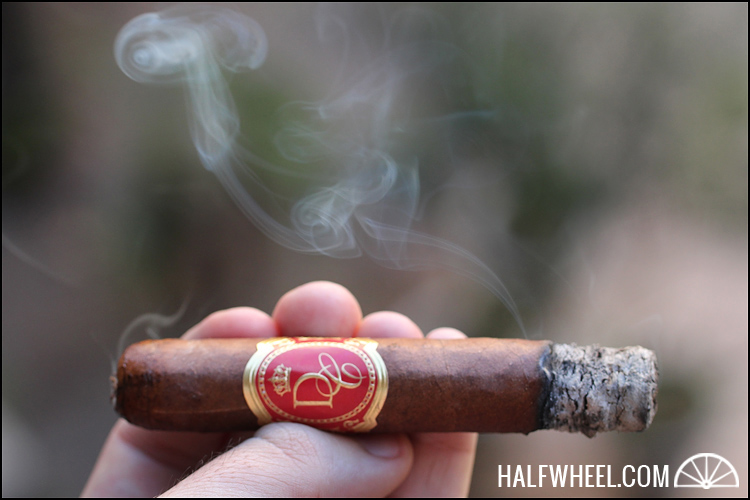 After a very mild opening, more significant flavors and aromas start coming out in the second third of the cigar. As mentioned above, there is more wood and pepper on the tongue, and the smoke develops notes of oranges that very pleasantly engage the senses. Just as the burn line crosses the center point, the D’Crossier Diplomacy Series Limited Edition 2008 Robusto, almost on cue, begins to open up even more and show its flavor, strength and potential – or possibly more accurately, its past potential. Continued notes of orange peel are present, shifting ever so slightly to suggest being grilled just a bit. The aromas are very enjoyable and really bring the cigar to a level of completeness that it had been largely missing up to this point. What lands on the palate tends to skew to the dry side and does seem to dry the tongue and lips out just a bit. There’s little nicotine kick found up to this point, with the strength and flavor at a mild-plus level. 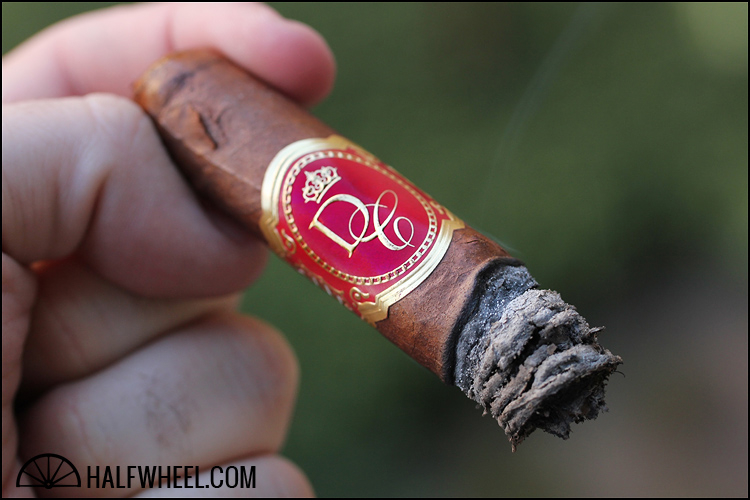 Heading into the final third of the D’Crossier Diplomacy Series Limited Edition 2008 Robusto, it’s readily apparent how smooth the tobacco is, as I have yet to find a single harsh or unpleasant note. Things stay on the mild side as the band comes off, backing down just a tick from where it was in the second third. There is still a dominant note of dry wood with a touch of sweetness in the aroma, shifting more towards honey than the orange peel note found earlier. Smoke absolutely billows off the cigar in the final two inches: rich, fluffy, and just peppery enough to be an attention grabber. There are notes of campfire that really ignite my sense of smell, and while I could go on and on about what’s happening in the nose, things are much milder on the palate. The finish is clean and smooth, and you can smoke it down as far as you want without the cigar becoming overly hot or harsh. 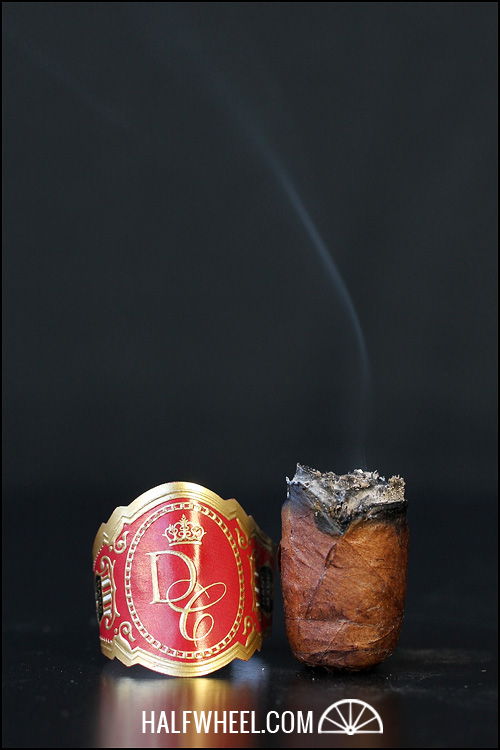 If only it were possible to return to January 2008 and smoke these when they were just released, I think I’d have a much greater appreciation for what they offer. As it is, we are now almost six years removed from their release, and I have to think that some of the more upfront notes have left this cigar, with some fading remnants still to be found in this mild to mild-plus offering. Assuming that you don't have an inherent aversion to milder cigars, the D'Crossier Diplomacy Series Limited Edition 2008 Robusto is a very enjoyable cigar that seems to offer more in the way of aromatics and subtleties than big flavors. The tobacco is incredibly smooth and the cigar is perfectly palatable from start to finish, which is a testament to the leaves used in this project and the processes to get them ready for smoking. In some ways, I feel like I'm doing a redux without having done an original review, which leaves me at somewhat of a disadvantage to provide a complete picture of this cigar. What I will say is this: if you come across the D'Crossier Diplomacy Series Limited Edition 2008 line, particularly the Robusto, don't hesitate to give them a try.