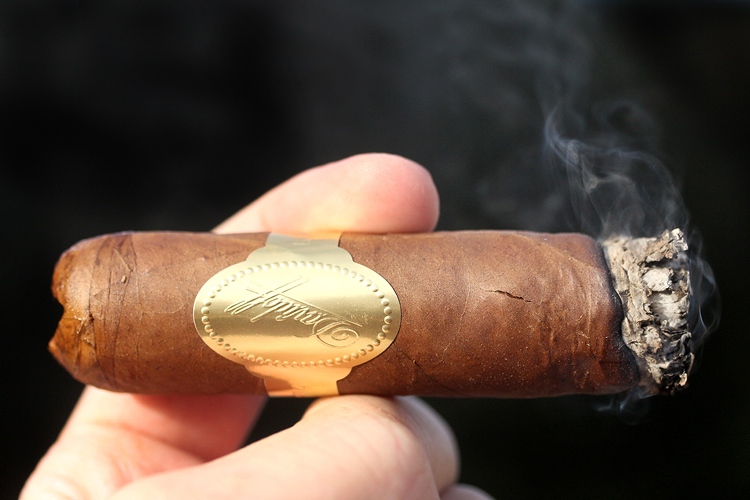 Earlier this month, Davidoff announced it was nearing the eighth release of its Puro d’Oro line, the Gordito. The cigar begins shipping to retailers this week, meaning the 3 3/4 x 58 vitola will begin arriving in stores just before March.

When the Puro d’Oro line was introduced in 2010, the line was touted for two particularly unique features. First, it was Davidoff’s first Dominican puro, something made clear by the name. Secondly, the vitolas were actually blended differently with only the Yamasá wrapper remaining consistent between the sizes.

Over the last few years Davidoff has added additional sizes to the line and introduced a gold main band for the line at IPCPR 2012 to accompany the line’s original foot band.

The eight vitolas that make up the Puro d’Oro line are:

The Puro d’Oro Gordito is offered in three different formats: I wouldn’t describe myself as a fan of foot bands or excessive use of gold, but this doesn’t look awful. Given the 58 ring gauge, the golden Davidoff band is gigantic and very gold. It’s a bit smaller than the typical NUb, or at least it feels that way, but this is still a short and fat cigar. I enjoy the use of the precisely-applied pigtail, although on one of the samples it didn’t survive. The Yamasá wrapper is not the finest example of wrapper I’ve seen from Davidoff, but despite the spots you can’t help but admire how well it’s applied. Aroma from the cigar is a combination of sweet nuts, cedars, leathers and raspberry. Cold draw of the Gordito features some earthiness, sweet cedars, leathers and a pungent black pepper—all somehow balanced.

The first third of the Puro d’Oro begins with some big Dominican cedars accompanied by some sweet and creamy notes. It’s medium, delicate and smooth and ends up leading to my mouth salivating heavily. Flavors of leather and aged tobacco become present, but the core  is relatively the same as the beginning: cedar, sweet and creamy. From the get go, the idea of smoking this in 30 minutes seems ambitious. As much as I try, the burn is neither fast, nor straight. Smoke production peaks slightly above average, but it takes work. Into the second third and a plethora of citrus notes present themselves on the nose. Up front, it’s a bit earthier, but otherwise the same as the second third. The Gordito is a cigar that proves the value of retrohaling quite easily. I’d peg the Davidoff at medium plus to medium-full, surely not the full that Davidoff’s press materials advertise, but it’s definitely one of the stronger White Label offerings. Once again, the construction is not ideal, coming up slightly short in every category. I only got to the final third once undamaged by the cold. There’s more creaminess on the nose, but the transition from the second third to the final portions is difficult to really peg. Elsewhere, little has changed. Despite what the picture shows, the Gordito was still smokeable, I just had to stop somewhere to grab a picture and I was fearful anything more would have led to nothing left. I'm not an expert on the Puro d'Oro line. I've smoked six of the eight sizes, but it's not part of the regular rotation and probably wouldn't be part of even my Davidoff rotation. The flavors I got from the Gordito were by far the most enjoyable of the line, there was a depth that I found in other Davidoffs that always seemed lacking from the Puro d'Oro line. That being said, I cannot recommend smoking them in the cold. It's a steep price and seemingly a recipe for failure in terms of the wrapper holding up in rougher temperatures. It's not my favorite Davidoff—not even close—but it's the best Puro d'Oro I've had to date and one that I look forward to enjoying again, on a Spring day.