In August of 1989, one of the most expensive, yet least destructive fires in history took place. Zino Davidoff, founder of Davidoff, allegedly burned upwards of 130,000 Cuban Davidoffs in the infamous Davidoff bonfire that marked the end of white label in Havana. By 1991, after years of frustration over poor quality, Cuban Davidoffs were no more. Given today’s prices, that fire had a retail value anywhere from around 7.5-13 million dollars.

Today’s review is one of Davidoff’s most historically important releases, the Davidoff No.1. The Davidoff No.1 was part of the original line of Davidoff cigars introduced in 1969, but more importantly was the first commercially released Lancero in the world. The Lancero vitola, also known as a Long Panatela, was developed in the El Laguito factory originally for the Cohiba brand in 1964, but was not offered for sale until 1984. This was because the Cohiba brand first served as the private brand for Fidel Castro (a role later allegedly filled by Trinidad) and then used as diplomatic gifts until it was offered for sale to the public in the mid-1980s. Like Cohiba, Davidoff was originally made at Havana’s El Laguito factory, which is where the factory name for the Lancero came from, El Laguito No.1. 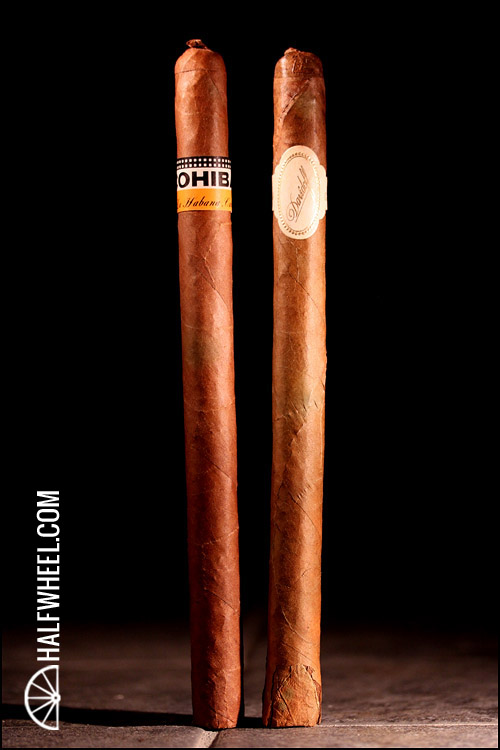 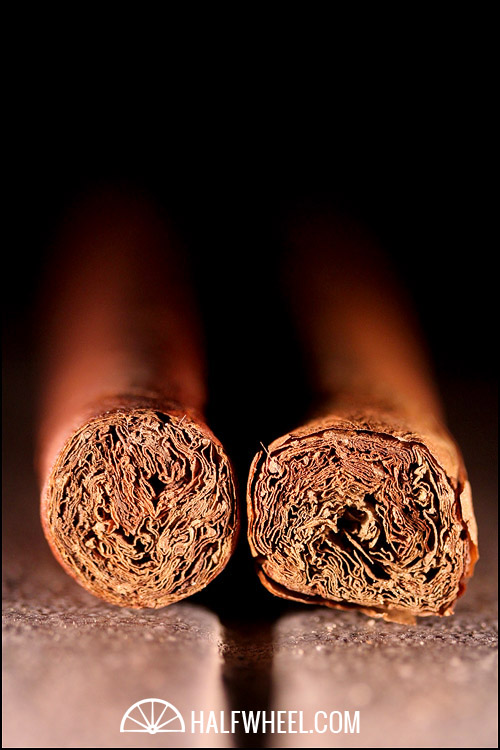 In October of 2005, James Suckling wrote a rather concise, yet detailed, article covering much of the history and controversy of Davidoff in Cuba. In addition to citing 3 million cigars produced annually for Davidoff, the relatively untold story of the non-El Laguito factories, Suckling claims that the former manager of El Laguito described the blend as:

The Cuban said that Davidoff basically followed the blend of Cohiba, but went for a slightly lighter wrapper to make the cigar smoother and more refined. 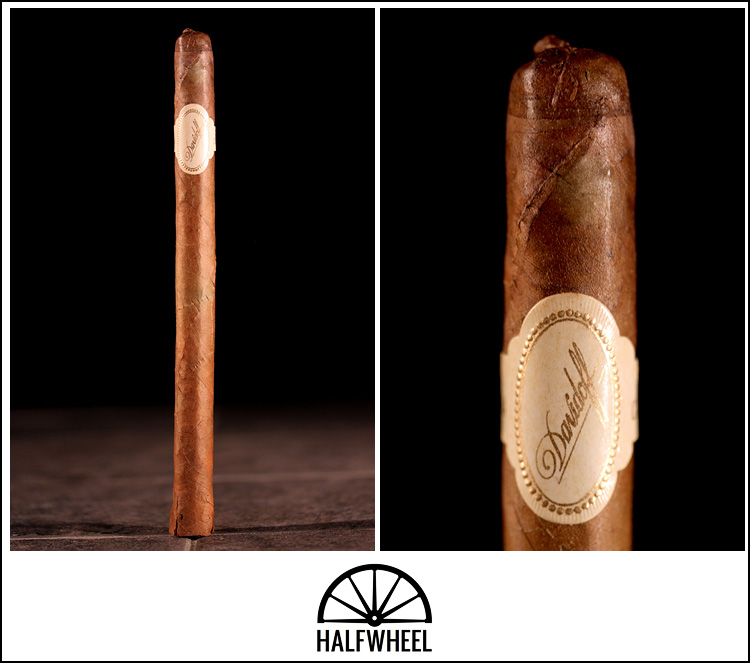 *Prices based off of C.Gars Ltd Auctions for cigars of similar years. Prices in the American secondary market are often a bit higher.

There’s a noticeable water spot on the Cuban wrapper. Overall, the color is solid with decent consistency, but the veins litter the surface of the Davidoff No.1 pretty badly. To some degree it almost looks like the cigar is stitched together. Aroma from the Davidoff is very full and pungent with lots of acidity and leather. The cold draw of the El Laguito No.1 actually takes a pit of the left over cap from the v-cut off. Flavor-wise, it’s medium-full with some basic coffee and perfume up front and a dominant orange note that is a bit reminiscent of Tang, the drink. Draw is great, which is a major relieve.

The first third begins with a hearty aroma of cedar, creamy and toasty, nothing special, except tons of smoke and a flavor of cedar and a sweet cocoa, the latter of which bitters incredibly quick. A bit of black pepper develops on the tongue and a musky earth, the latter of which isn’t shocking, although the fullness is. Draw? It’s a smooth as butter. A few minutes in, there’s a cedar that develops, along with a bit of creaminess and a sour leather note. The Davidoff is quite full and heavy from the start, regardless of it being a Davidoff. As for the citrus note, it quickly is falling apart as part of the finish. An inch or so in the draw gets tighter and the flavor begins to sour. 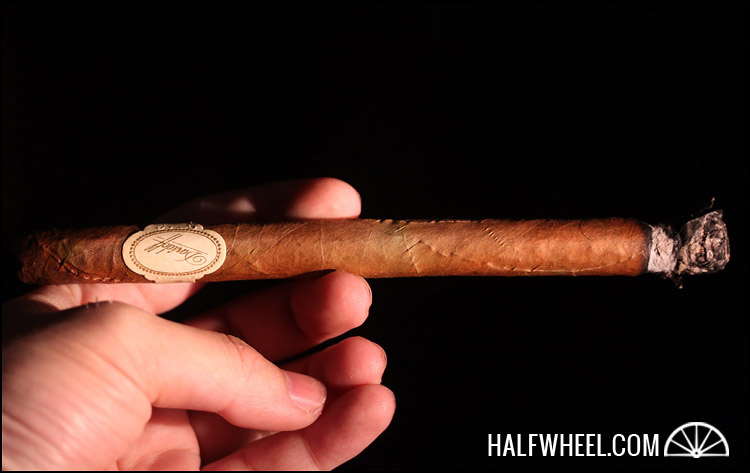 Into the second third and there’s a lot less sourness, which is a welcomed change. The earthy and cedar notes begin to fade only to see an interesting bbq note develop that intertwines with some predictable Davidoff grassiness. Despite two inches of dark ash, at one point the Davidoff just goes out. I could see and feel it going out and really have zero explanation for it. I was smoking at a consistent rate and all of a sudden, it just rapidly began to drift away from me. After relighting, the flavor seems to be mainly grassy, but by the transition to the final third, the sourness is back. 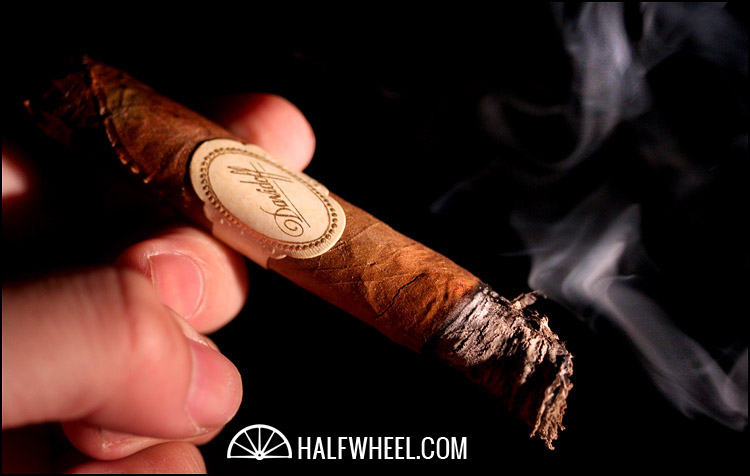 By the final third, I really wish that this was something other than a full flavor cigar. The Davidoff No.1 is now a mixture of mustiness and sourness, easily one of the most offensive flavor profiles I have ever found in the cigar. For a bit of saving grace, the Lancero manages to not go out again, but the damage was already done. Towards the end the cigar gets predictably bitter and hot, but the draw actually manages to stay the same and as I snap the final pictures, I just sort of laugh — because that’s about all you can do in this situation. 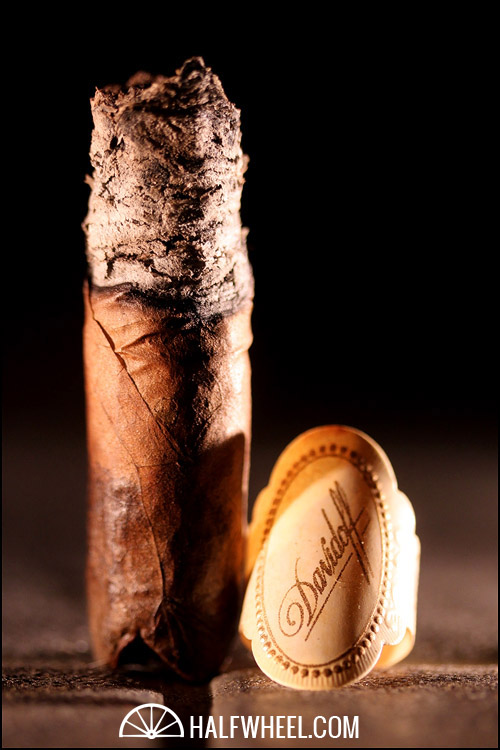 Like many of you reading this who have never smoked a Davidoff before, I once read what is about to come and hoped for something different. I really did. I hoped this was going to be at least smokeable. I really thought it was going to somewhere between bad and non-existent. But overall, this was rancid. I can't defend the storage conditions because they are unknown to me, but this was beyond that. I'm not sure what it is, but I now fully accept when many before me have preached: Cuban Davidoffs are done. Do I regret smoking this? No. Would I have thrown this out if it was $5 and not for a review? Absolutely. Easily one of the worst Lanceros I've smoked and easily the most difficult cigar to ever recommend to someone.