I switched around when this review would be published for a few reasons, mainly due to the fact I wasn’t happy with how the pictures turned out to do some lighting issues. As such, I published the Pinar Del Río review in place of this. I’ve just finished smoking another Davidoff Millenium Lancero, this one mostly for photographic purposes and it seems right that this review is published today. The new Davidoff of Geneva Madison Ave. store has just finished its first week concluding with a pretty spectacular Saturday in regards to Davidoff’s moniker, “The Good Life.” Yesterday included both the Kentucky Derby and a prize fight; two sporting spectacles that are not only heavily tied to cigars, but symbolic of the good life. 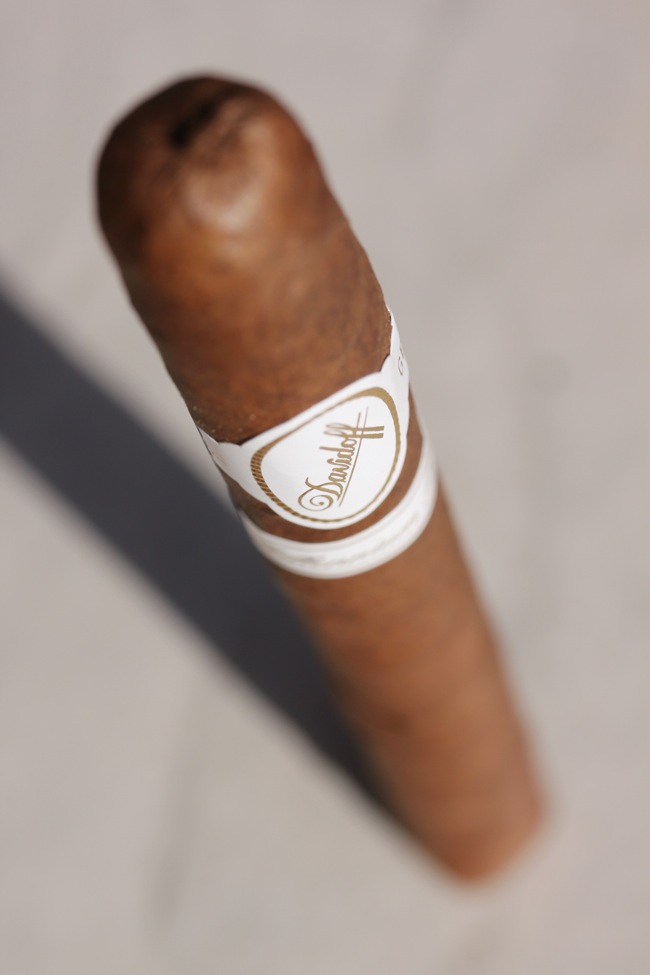 Today’s Smoke
In 1999, Davidoff released 2,500 boxes of the Davidoff Millennium Collection. Darker than your typical Davidoffs, three different Perfecto sizes would make up a total of twenty cigars a box. Davidoff explained the uniqueness as:

A limited edition of no more than 2500 Davidoff Millennium collections throughout the world. The cigars making up the collection are characterised by tobaccos matured for over four years and wrapper leaves that were fermented for an exceptionally long period. The Perfecto formats are a reminder of the treasured value of the tobaccos.

It’s a bit shorter and lengthier than the traditional Lancero shape measuring in at 7 1/4 x 40, but unless you actually hold one, these could probably pass for the traditional size. The Ecuadorian Hybrid wrapper is a straightforward earth with essentially no reds. Color-wise it’s somewhere between a true Colorado and your regular Davidoff. I’ve smoked nearly a box of these since picking up a ten-count box last July, they aren’t the prettiest of roll, not as smooth as you would expect from Davidoff. Mild and medium sized veins litter the cigar, quite a bit heavier than most. Aroma has been the same since day one a smooth mixure of earthy aged leather with a bit of bakers cocoa and red wine on the finish of an overall medium character. I’m not sure when the box was rolled, but the cigars have a slightly rounded-box-pressed nature at the foot. The picture below is a bit rounder than it looks, but you get the idea. While the packing is obviously quite good, it’s fairly soft to the touch. Aroma from the foot is herbs, earth, cocoa and a real dark nut that blends in all of the flavors to the medium plus nature. 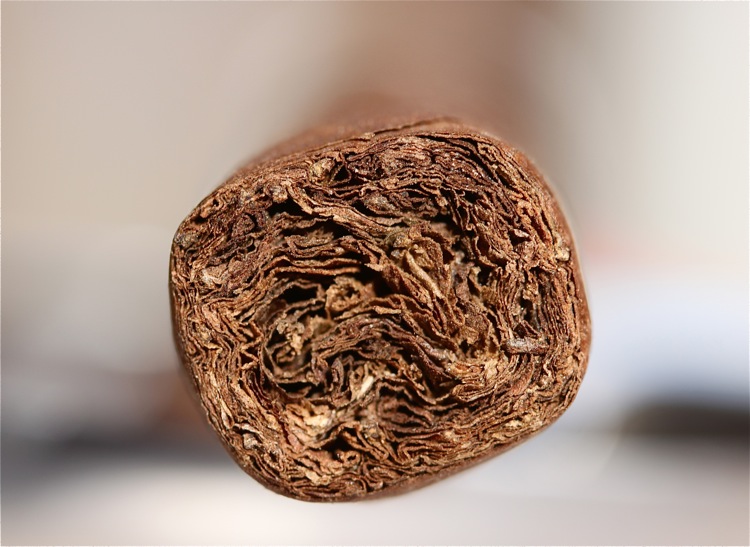 Lighting
Sometimes the v-cutter on a 38 RG seems like too much, but on the 40 RG there are never any problems. After the pigtail is gone, there’s a full aroma of earth, grape, raisin and nut with spice on the finish. Cold draws for the Millennium Blend Lancero are consistently tight, which is pretty easy to understand given the roll. Flavor is earth, red wine and nuts with a plum like finish rounding out the medium flavor profile. It’s real light and clean on the palate despite the depth of the flavor. Lighting produces fruits, cedar, cocoa and roasted nuts; really a spectacle in its own right. The Davidoff’s first draw begins with either rich nuts or aged cedar, what transpires next is sweet nuts, cocoa and some of the red wine leading to a finish that usually mirrors the initial flavor. Perhaps it is me and not the Davidoff, but while the flavor is always full, it seems to change consistently as to which one of the two notes dominate. 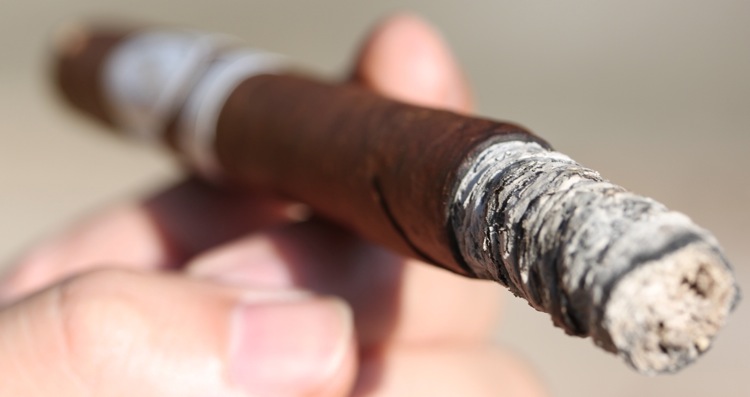 First Third
While the initial draws might be varied, the beginning of this cigar was consistent. Extremly rich cedar and a slightly sweet nuty note are joined by touches of brown sugar and sweet earth, definitively full. Finish is sweet earth, cedar and nuts; full, but short. Draw of the Davidoff is still slightly tight with slightly better than average smoke production giving off a great earthy chocolate note. The mixed grey ash is some of the best-holding of any Lancero. Even in strong winds, as the above shows, I got two and a half inches, pretty remarkable as far as Lanceros go. 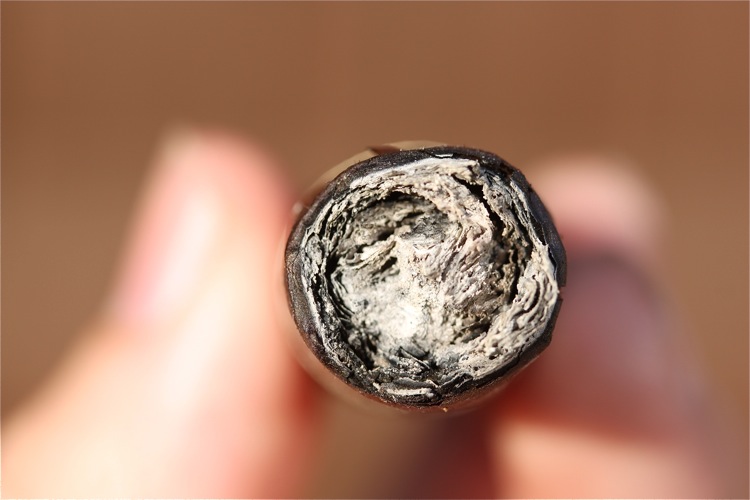 Second Third
There’s an added richness and flavors in the middle portion, but up front it’s still nuts and cedar. Cocoa, toasty earth and herbs strengthen tremendously. As with almost anything Henke Kelner puts a white label on, the flavor, despite the qunatitiy, is smooth and balanced. Finish lengthens a bit with the Davidoff bringing nuts, toastiness and dark herbs. Smoke production increases and the aroma is now a heavy toastiness, but most everything else remains the same. 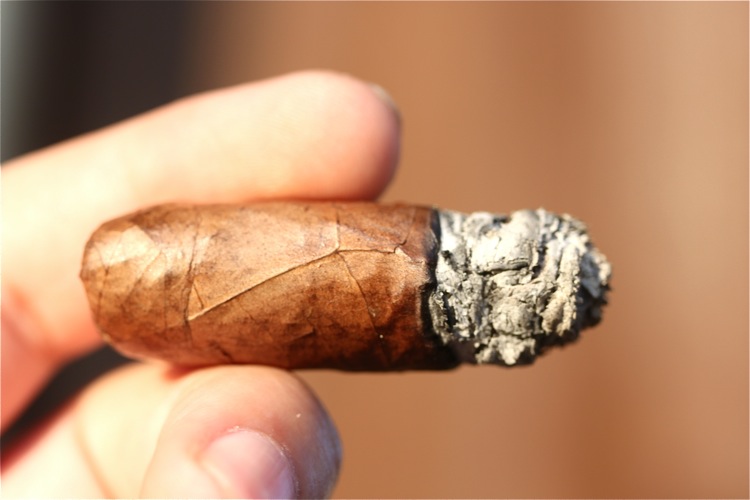 Final Third
The Millennium Blend Lancero comes to a close correctly. Nuts, tobacco and spices round out the final third, still full. Finish is mostly the same with an added spice and a bit of the red wine making it in there as well. It’s by far the lengthiest of any other portion of the smoke, but still not setting a new records. The rest of the Davidoff is once again, like it has been. Down to the last half inch, the Millennium Blend retains the ability to go minutes without a puff, but eventually fingers are burning and things get put down. 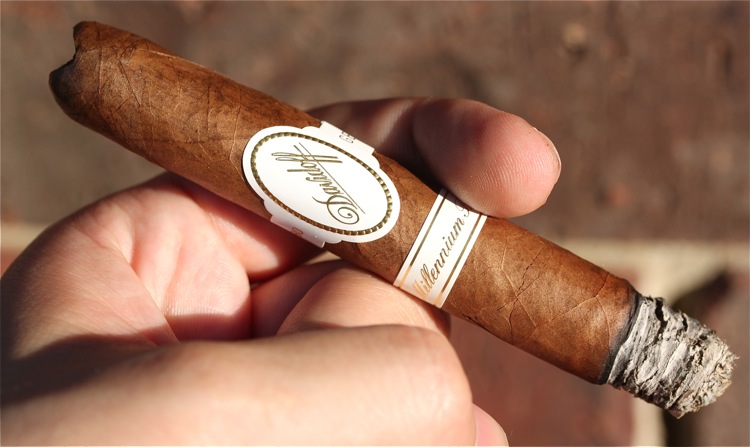 For the Novice
Davidoff advertises this as a “full-body” cigar and I’m unconvinced. Strength-wise, it’s without question noticeably stronger than most of the regular Davidoff releases, but body? It’s medium-full and no more, which is relatively light compared to a lot of other Davidoffs While most (Davidoffs) are fine nicotine-wise, this is pushing the limit, but only slightly. I can’t however say that this would be something I would start with as the flavor profile is definitely suited at a more experienced palate. 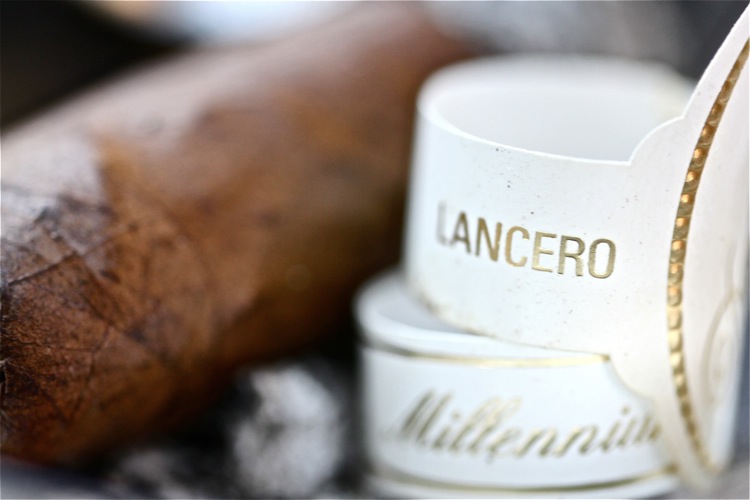 In the End
The Davidoff Millenium Blend Lancero is a Davidoff: rich, clean, smooth, well-made and utterly consistent. The most consistent cigars in the world are made by machines, the next closest are made by TABADOM – this fact is indisputable. Do I like the Davidoff Millenium Blend? Yes. Is it worth the price of admission? Meh. I know the folks at Davidoff don’t like it when people complain about the price, but perhaps this is a bit different. My issue stems around what other $20 Lanceros exist (hint, there aren’t many and most are made by Fuente) and where the bar set by them. There’s no denying all that the Millenium Blend Lancero has, but it feels as if something is missing. In the grand scheme of things, one issue becomes glaring, at least for me.

85. One more flavor should bring enough excitement to make this a very good cigar, as of now it’s just not there. flavor-wise.