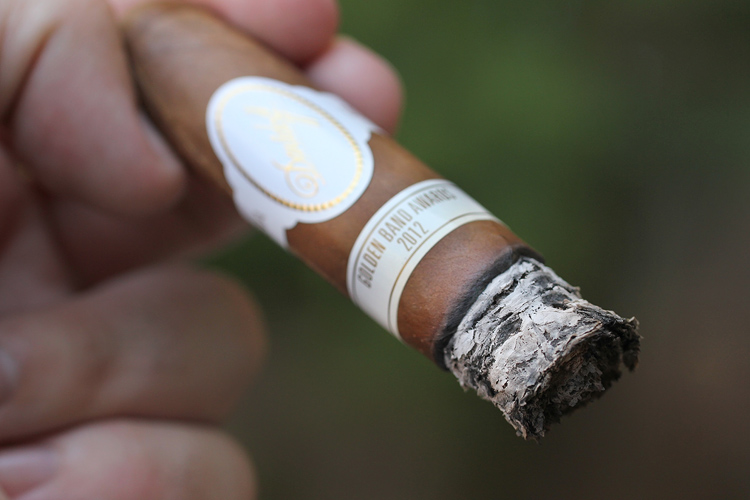 In mid-July, just a few short weeks before the 2012 IPCPR convention and trade show kicked off in Orlando, Davidoff announced a new addition to the festivities: the inaugural Golden Band Awards.

The inaugural Davidoff Golden Band Award Show will honor those Appointed Merchants that truly embody the Davidoff standard of excellence. The first annual awards show will be part of an exclusive Davidoff event on August 4th at IPCPR in Orlando, Florida. The Golden Band Awards materialized from the brand’s success, rooted in decades of long-standing partnerships with trusted merchants. Davidoff has a long history of working with its family of retailers to help them expand their businesses, discuss best practices and grow the Davidoff brand, hand in hand. The awards are an opportunity to officially recognize these retailers for their commitment and passion for Davidoff.

The awards ceremony was held in the Orange Ballroom of the Hilton Orlando on Saturday, August 4th – a black tie event that brought some of the most prominent cigar retailers together for a night of excellent food, wine, music, dancing and of course, Davidoff cigars. After the awards were presented and dinner was finished, a special cigar was brought out for the attendees to cap off the evening with: the Davidoff Golden Band Awards 2012 cigar. Blended by Henke Kelner, the cigar was created for the awards event and uses the Davidoff Yamasa wrapper that Kelner developed, on top of a Dominican binder and filler.

While it wasn’t announced at the time–at least not to my recollection–the Davidoff Golden band Awards 2012 cigar would be made available for purchase by the eleven award winners:

Each retailer will be able to purchase the cigar from Davidoff for one year – until the next group of Golden Band Award winners are announced. In addition, winners got a trophy: 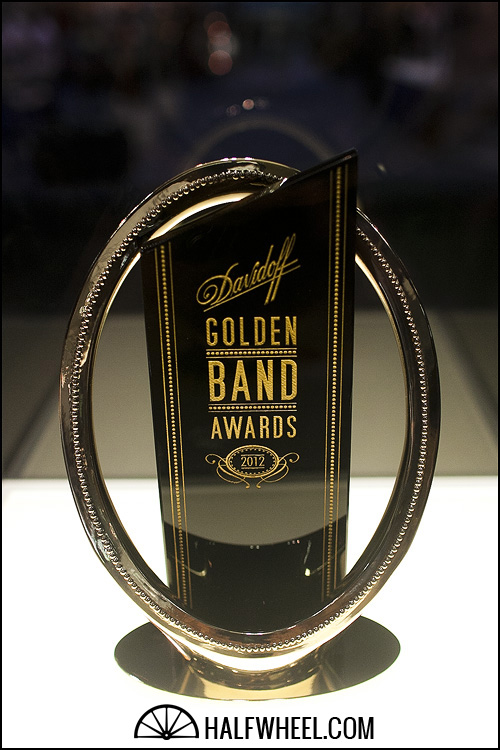 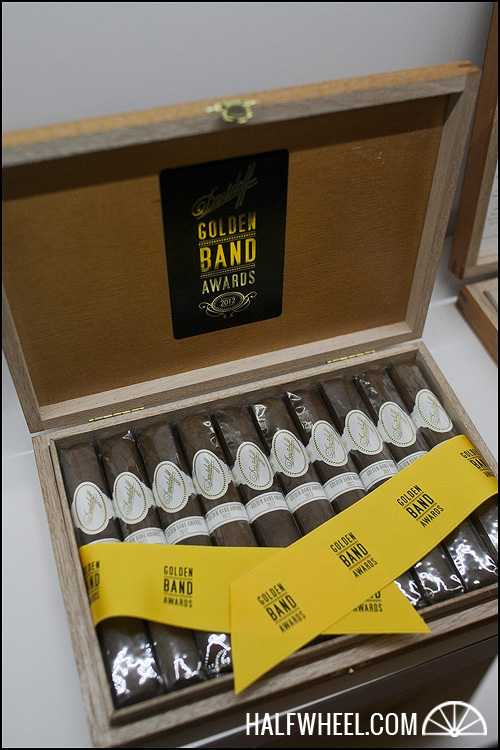 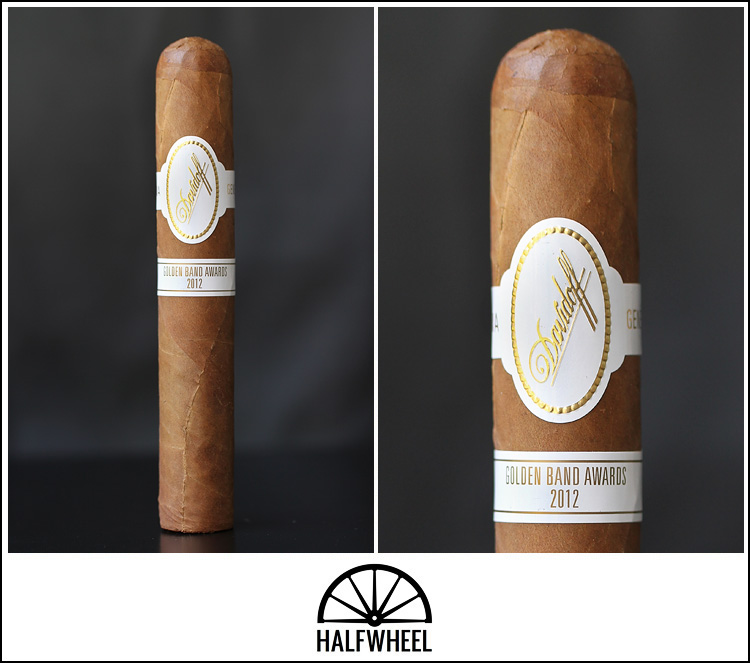 The Davidoff Golden Band Awards 2012 looks as familiar as any of the other White Label cigars—a light brown Dominican wrapper that probably seems lighter than it is because of the white and gold bands. I’m surprised how veiny this sample is with one running underneath the band that interrupts its smoothness. The cap is also more pronounced than I recall seeing on other cigars. The aroma on the foot is a distinctive wheat toast, full and with no spice. A lighter note along the lines of cereal grain comes through on the cold draw, which is unimpeded.

A surprisingly full-bodied and spicy smoke opens the first third of the cigar. It backs off within a few puffs, but stays a solid medium body with a wood note that envelops a bit of pepper and creates a very enjoyable balance. The ash creates a layered cake look with alternating layers of dark gray and black ash. 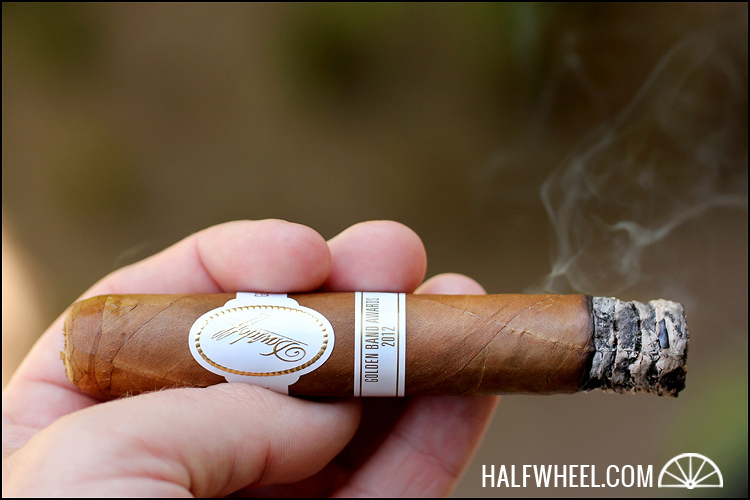 It’s almost time for the second third to begin when the ash finally drops off. With the removal of the ash comes the addition of a creaminess to the smoke as well as a touch more pepper both in the nose and on the palate. I’m still surprised how well the ash is holding on, not budging when the label came off or when set down in the ashtray. By the end of the second third, it seems that the Davidoff Golden Band 2012 has dialed itself in fairly nicely – a bit of wood, some spice, some wheat toast, and just the start of what is commonly thought of as the Davidoff twang. 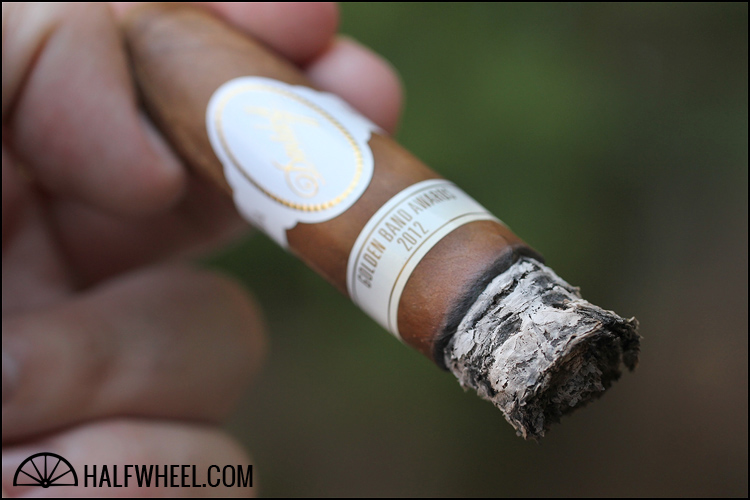 There’s not much change in the final third, other than the heat and what its closer proximity does to the flavors. What continues to intrigue me is the almost delicate pepper note that keeps darting in and out of the flavor equation: it adds a wonderful bit of character to what has become a fairly medium-bodied cigar that seemed to settle into its sweet spot a inch or two in. 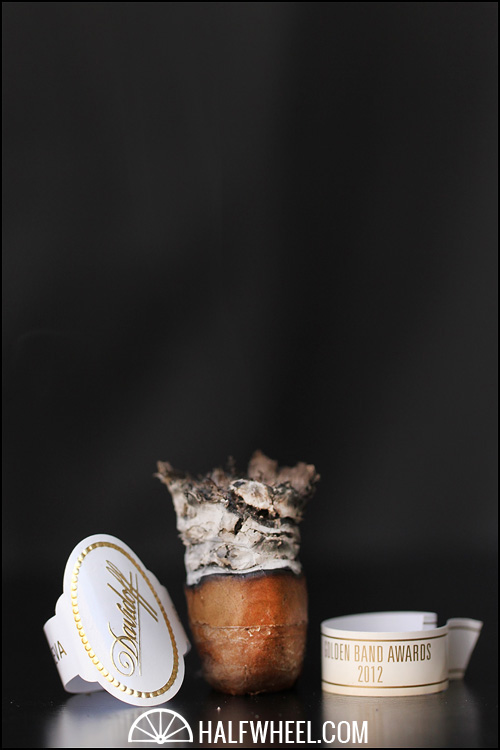 Not knowing that these would be made available to the award winners at the time I smoked it, and not knowing the price of the cigars, I was wishing that they would be available because I'd like to go pick a few more up. Well, they are available as the Golden Band Award winning retailers have started to get them, so I guess I have to fulfill my wish. While we don't take price into consideration in our reviews, they are a bit more expensive than I anticipated, but that doesn't detract from my thoughts on the cigar: it's a delicious medium to full bodied cigar that earns points with its balanced strength and skillful use of pepper to keep me engaged the whole way through.