Davidoff Up Down 50th Anniversary

On November 1 and 2, 2012, Up Down Cigar in Chicago, Ill., held events to celebrate the store’s 50th anniversary. On hand to commemorate the milestone was famed Davidoff blender Henke Kelner, who not only attended, but who also ran a blending seminar for those who were present. In addition, the event was the release of the Davidoff Up Down 50th Anniversary, a 6 x 50 Toro blended specifically for the store’s anniversary.

Only 500 boxes of 10 cigars were made, each priced at $199.50 per box and $19.95 per cigar. The store dictated the size and vitola, but the only thing they asked for in terms of the blend was that it be based on the 2006 release of the 100th Anniversary Diademas Finas.

The boxes the Davidoff Up Down 50th Anniversary come in look like this: 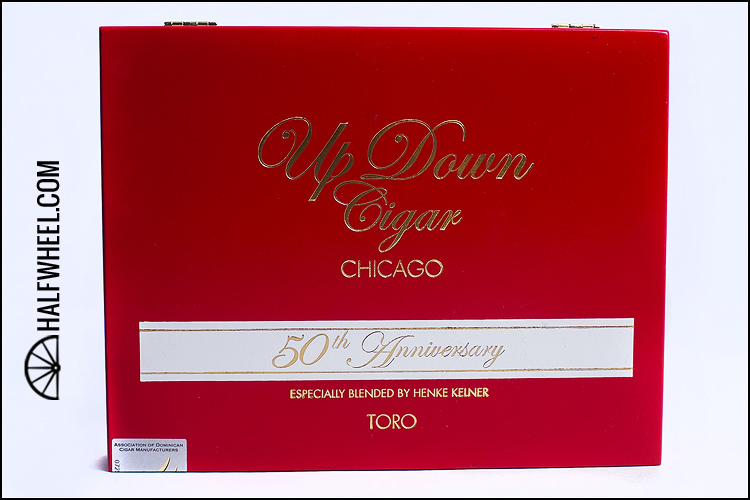 The Davidoff Up Down 50th Anniversary is a great looking cigar with a dark cinnamon brown covered wrapper that is smooth to the touch and has absolutely no noticeable seams. It is a bit hard when squeezed, but not so hard that I think it will be a problem, and there is no oil whatsoever present. The aroma from the Dominican wrapper is strong leather, barnyard, earth and chocolate.

The first third of the Davidoff Up Down 50th Anniversary starts out with very strong notes of leather, earth, dark chocolate and nuts. There is a great sweetness underneath—almost molasses like—and the perfect amount of black pepper through the nose to compliment the rest of the flavors. I am noticing a little bit of spice on the back of my tongue, but it is far from overwhelming and starts to recede about halfway through the first third. The draw is just a bit tight, but not annoyingly so, and the burn is ok, albeit a bit wavy so far. Smoke production is above average and the strength ends the first third well below the medium mark, but rising slowly. 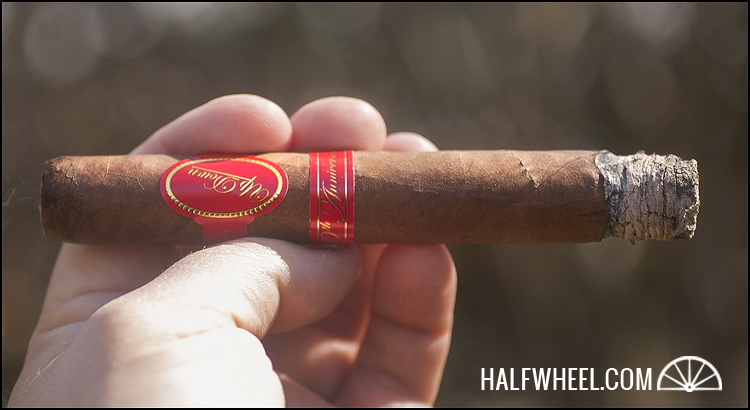 Coming into the second third of the Up Down 50th, I am starting to pick up more of the signature Davidoff musky note, almost like mushrooms. Thankfully, it is not overwhelming the other flavors as of yet, and I can still taste notes of earth, nuts, espresso and cedar. The molasses sweetness is still very much present, but is still not overly strong and it combines quite well with the rest of the flavors. The pepper from the first third is noticeably reduced and while the draw is still perfect, burn is still wavy. Smoke production is still above average, and the strength is still below medium, albeit stronger than the first third, and I don’t think it has leveled off just yet. The final third of the Davidoff features less of the mushroom note from the second third, along with more cedar, earth and leather. There is an added saltiness that comes and goes until the end of the cigar and a bit more sweetness as well. Interestingly, there is a significant uptick in the amount of pepper on the retrohale in the final third, somewhat taking me by surprise. The burn also finally evens out, but the strength barely hits the medium mark by the end of the smoke. One of the issues I have with most Davidoff cigars is that a majority of them end up with essentially the same profile, regardless of vitola or even release. If you love that profile—then that is most likely a good thing—but if you don't, it can be problematic. The main thing about the Davidoff Up Down 50th Anniversary is that while it does have quite a bit in common with other Davidoff releases, it definitely is its own cigar. Yes, the mushroom note is a bit distracting at times, but it is never all that strong and the pepper blast at the end of the cigar was a total surprise to me, in a very good way. It is still assuredly a Davidoff, but the profile is easily unique enough to make me want to smoke it again.