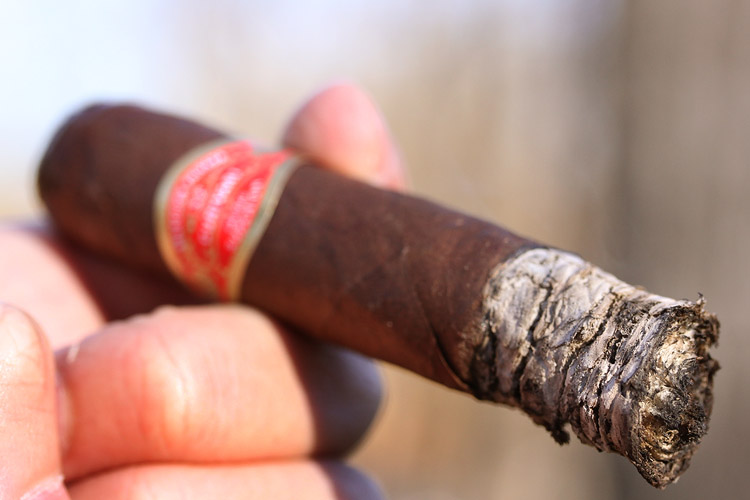 2011 was a breakout year for a few brands, one of which had to have been Curivari. Much like EloGio, IPCPR 2011 seemed like a breakout event for the small Nicaraguan brand.

Curivari’s strategy isn’t a new one. The idea behind the brand is to make non-Cuban cigars that taste like current Cuban cigars. While the strategy is thrown around quite frequently, Curivari has taken it a bit further by making specific lines to taste like a specific Cuban counterpart. In addition, Curivari’s bands look quite similar to those lines which it tries to replicate.

For example, the El Gran Rey is made to replicate the Hoyo de Monterrey profile, Gloria de Leon is blended to tastes like Romeo y Julieta, etc.

The Curivari’s wrapper is a beautiful dark color, not as dark or deep as the Reserva Limitada 1000, but still quite dark. To be quite honest, this is not a shining example of Curivaris ability to roll cigar. It’s not an ugly cigar or concerning, but definitely their best work. Aroma is dark leather, earth and some sweet cocoa from the Nicaraguan wrapper. The foot exhibits nuts, earth and a very sweet faint hickory note. Cold draw is a bit surprising: dry nuts and earth, medium and dull.

Fortunately, the first third starts a lot better than the cold draw: sweet cocoa, earth, cedar and a bit of chocolate cake. That hickory note returns on the finish, which also sees a bit of pepper mid-tongue. Unfortunately, the first third settles to be a bit harsh. The core of the Curivari Selección Privada is an earthy cocoa, cedar up front and the familiar pepper on the finish. Smoke production is good, but draw is a bit open.

The second third really just seems to confirm what took place in the first third. A bit less harsh in terms of the cocoa, but the reality is the Selección Privada is no more complex a few inches later. The hickory moves up front merging with the cedar and the pepper strengthens, but the changes are subtle. Construction remains much the same: good smoke production, okay draw and a spot on burn.

Into the final third and it’s clear things are changing. There’s caramel and a nuttiness that really wasn’t anywhere to be found in the first portions of the cigar. The Curivari gets a bit more complex, but with an inch and a half left, it seems like the bottom falls out. It continues to burn fine right down to the nub, but there really doesn’t seem much of anything to be burning.

This wasn't a Partagás copy. At least not like the El Gran Rey and Gloria de Leon have succeeded. Curivari has used darker wrapper in the Reserva Limitada 1000 and Classica lines, and with a bit of rest, both of those lines work. The Selección Privada does not. This wasn't just not very Curivari like, the Eminentes size wasn't very exciting. Perhaps like some of the Reserva Limitada lines, a few months in the humidor will help, but as of now, these easily are the worst Curivaris I've smoked.