It was February 14, 2013 when word came out of a new line from Crowned Heads, as Jon Huber shared details of the J.D. Howard Reserve, a project that would become the third core line in the Crowned Heads catalog.

The cigar draws inspiration from Nashville, Tenn.—and Jesse James—or rather, the alias that James used while he lived in the city as he tried to establish a normal life following an 1876 bank robbery in Minnesota that resulted in the death or arrest of several members of his gang. Nashville is also where Crowned Heads is based, and in an interview with Cigar Aficionado, Jon Huber said that when he learned of James’ connection with the city, he saw an opportunity to create a match between a cigar and a name.

The J.D. Howard Reserve is being released in five sizes at its debut, and all fairly traditional at that, which is somewhat of a surprise given that 6 x 60 seems to be a standard for almost every new line these days:

Huber also mentioned that he is not going to incorporate a “gimmicky” marketing campaign around the cigar, avoiding the use of guns and wanted posters in the cigar’s marketing. Indeed, what marketing I have seen has focused around the incredibly well-styled JDH logo, and the color scheme for the bands is classy and subtle, with just enough happening to draw your eye to it. 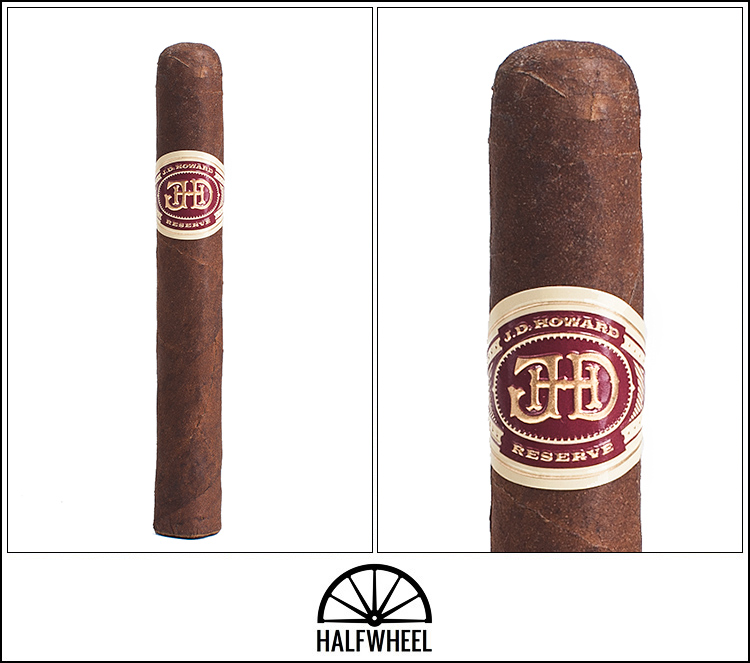 *Shipping is slated to begin this around this date, as the cigars were en route from the factory to the company’s warehouse at the time of publication.

The Crowned Heads J.D. Howard Reserve HR50 has a mottled dark brown wrapper with a bit of shine and toothiness. There’s just a bit of give to the cigar, and the veins are small but noticeable from a visual and tactile sense. The pre-light aroma has a light note of dry tobacco, cotton, milk chocolate, cocoa powder and a touch of pepper, though that mix varies from cigar to cigar, and in one there was a sweetness that stepped forward beyond all those notes. The air moves well in the cold draw, with notes of cedar, a hint of sweetness and a touch of pepper. One cigar in particular had a more pronounced chocolate note, which when combined with the pepper made me think back to a cafe in Playa del Carmen where I would stop and get these fantastic Mexican hot chocolate drinks after a long day.

Big notes of beef jerky come off the cigar right when it is lit, but the palate unfortunately doesn’t get any of that wonderful note. A tangy note of wood leads things off on the palate, before the J.D. Howard Reserve delivers a good hit of pepper and spice after a few puffs, along with a more distinct cedar note comes in from the background that starts things off on a medium to medium-plus note. A dry chalk comes into the equation after about three-quarters of an inch and brings along a slight bite to the tongue, while the nose gets a good amount of pepper. Early on, the ash is tight and white in some spots, light gray in others. Throughout the first third I’m impressed with this little wisp of smoke I see coming off the cigar, reminding me that it hasn’t gone out while adding an enjoyable aromatic to the immediate surroundings. Heading into the second third of the J.D. Howard Reserve HR50, there is a strong chalky, peppery note in the smoke that hits the nose hard; it’s not big, bold and peppery, rather almost dry and with a mineral quality. One of the cigars was smoked on a fairly humid night and that touch of moisture seemed to sharpen those notes just a touch more. Past the center line, a bit of damp wood and leather comes out before the flavor and body start to build, drying out a bit and bringing out a slightly sour note that I thought I may have faintly picked up earlier. The burn line and ash density remain fantastic, and there hasn’t been need for a single touch-up. The final third sets itself up with warm undertones of coffee and some pepper with supporting notes of earth, and still just a twinge of sourness that nips at the front part of the tongue. I must say that in some ways, I like it – much the same as I like other sour flavors. In other ways, it makes me wonder if this is what I should be tasting. The flavors intensify a good bit in the final inch and a half, as the heat turns the coffee note to espresso and kicks the pepper up a notch, and the J.D. Howard Reserve stays smokeable nearly all the way to the cap. If there's ever been a cigar I'm on the fence about, it's the J.D. Howard Reserve, at least at this point. It is a different flavor profile from the Four Kicks and Headley Grange lines—and just as enjoyable—at least at times. There are some really enjoyable notes that come out with alternating levels of strength and subtlety, and it seems to be a fairly good representation of the Brazilian Arapiraca leaf with the Sumatra binder contributing some very palate-pleasing notes as well. But then there is this sourness that I'm just not sure what to make of: at times it is enjoyable, at other times, it just bites the tongue too hard for my preference. Maybe it goes away with some time, maybe it doesn't — that will be something that will only be determined in the coming weeks and months, and after I've had the chance to smoke a few more J.D. Howard Reserves from retail shelves. If those touches of sourness dissipate, this could end up being a darn good cigar.