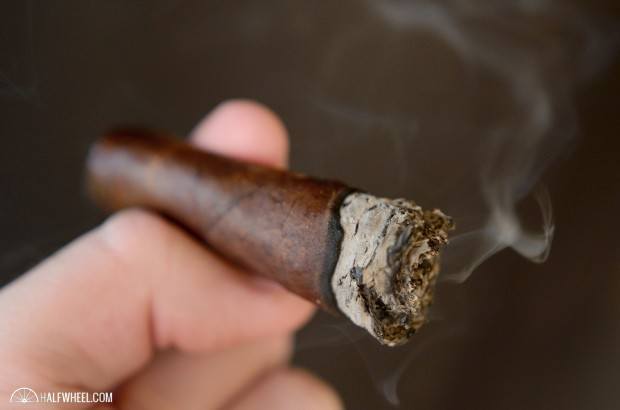 Last year at the IPCPR Convention and Trade Show, RoMa Craft Tobac showed off its La Campaña de Panamá Soberana. It was the first of its flagship line, CRAFT, and used essentially every varietal of tobacco the company uses for its Aquitaine, CroMagnon and Intemperance lines.

CRAFT was introduced as an annual release, but as summer neared, word from RoMa Craft Tobac’s Skip Martin was that there would not be a CRAFT 2014. By late June, those plans had somewhat changed and Martin announced WitchCraft, a La Campaña de Panamá Soberana with the binder and wrapper switched that would be produced for an event. 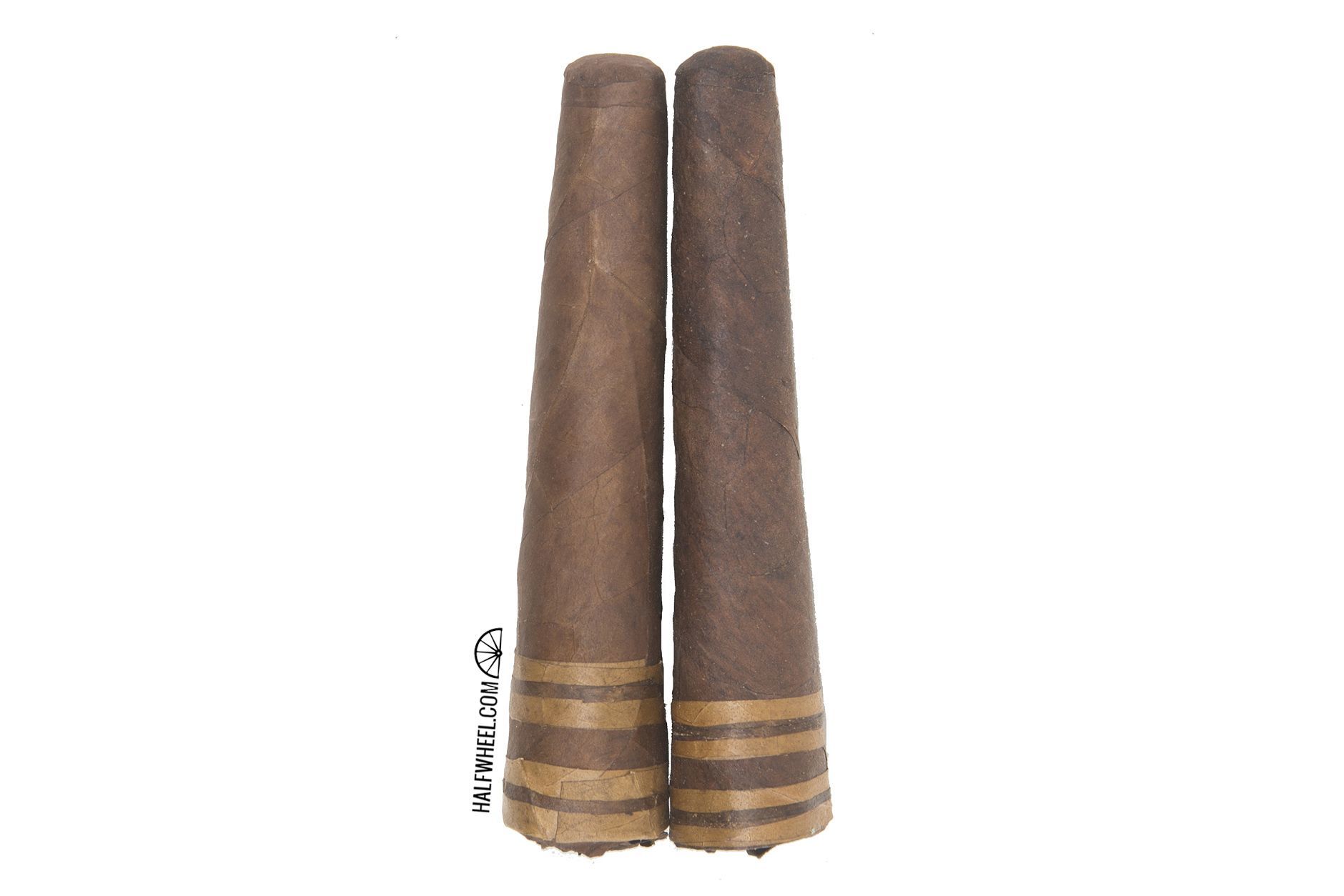 It’s hard to really call this a legitimate CRAFT 2014 as the cigar is being made for the California Mega Herf, which takes place Sept. 25-28, 2014 in Los Angeles. The cigars will be offered to attendees of the event and then sold through La Marca Cigars, which is a sponsor of the event.

Martin himself has said the cigar is not part of the CRAFT line. 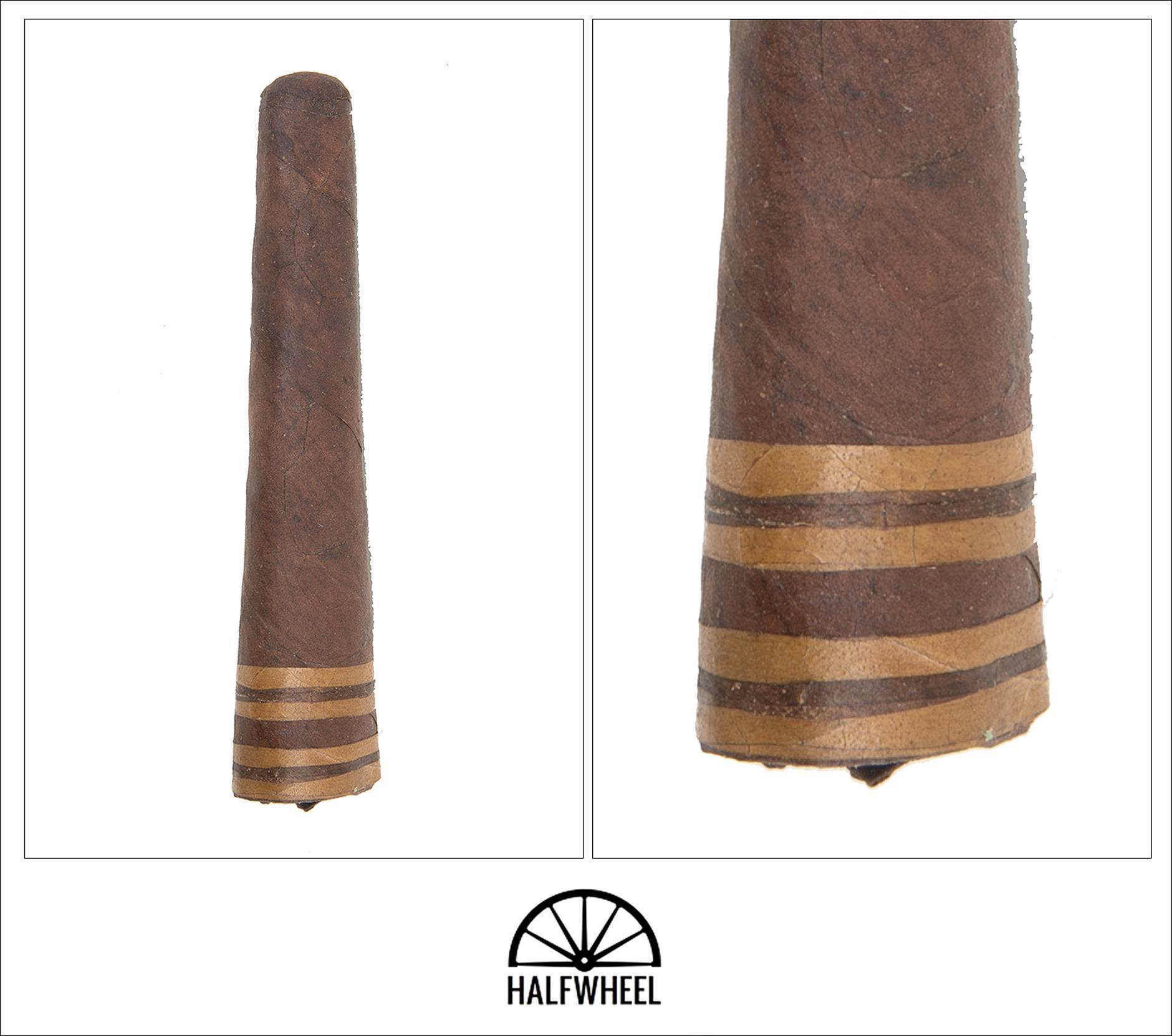 The WitchCraft is just as unique looking as its La Campaña de Panamá Soberana counterpart. With a slightly rustic wrapper, the cigar doesn’t shy away from it’s bumps or the single significant vein running down one side. Besides the the shape, the tobacco bands at the bottom are the only real “branding” since it doesn’t have a traditional paper band. Overall the cigar has some give, though there are a few minor soft spots here and there that I doubt will be of any issue. The wrapper’s aroma is a rich barnyard, leather, some musty hay and an earthy undertone. As for the cold draw there is a strong sweet dried fruit note with some underlying tobacco and a significant amount of spicy pepper on the finish.

The first third starts out like the cold draw but in reverse. Big spicy pepper notes dominate up front while the sweet dried fruit is relegated to the background along with the sweet tobacco and cedar. Only a few draws later the big pepper dies down a little, allowing a sweetness to permeate the whole profile. As much as you might expect the draw to be quite open with its shape, the WitchCraft sits fairly comfortable in the middle of the ideal range. Plenty of smoke pours out of the cigar on each draw and continues long after it is set down. Despite the tobacco bands that were added on top of the wrapper, the ash is quite tight and holds easily over the inch mark. The burn isn’t perfect with spikes here and there breaking up an otherwise fairly even process, though they seem to take care of themselves. After about an inch the cigar has mellowed out even more; the pepper is definitely still there, though it’s much more on the finish with the dried fruit and cedar more prominent with a general earthy tone to the profile. 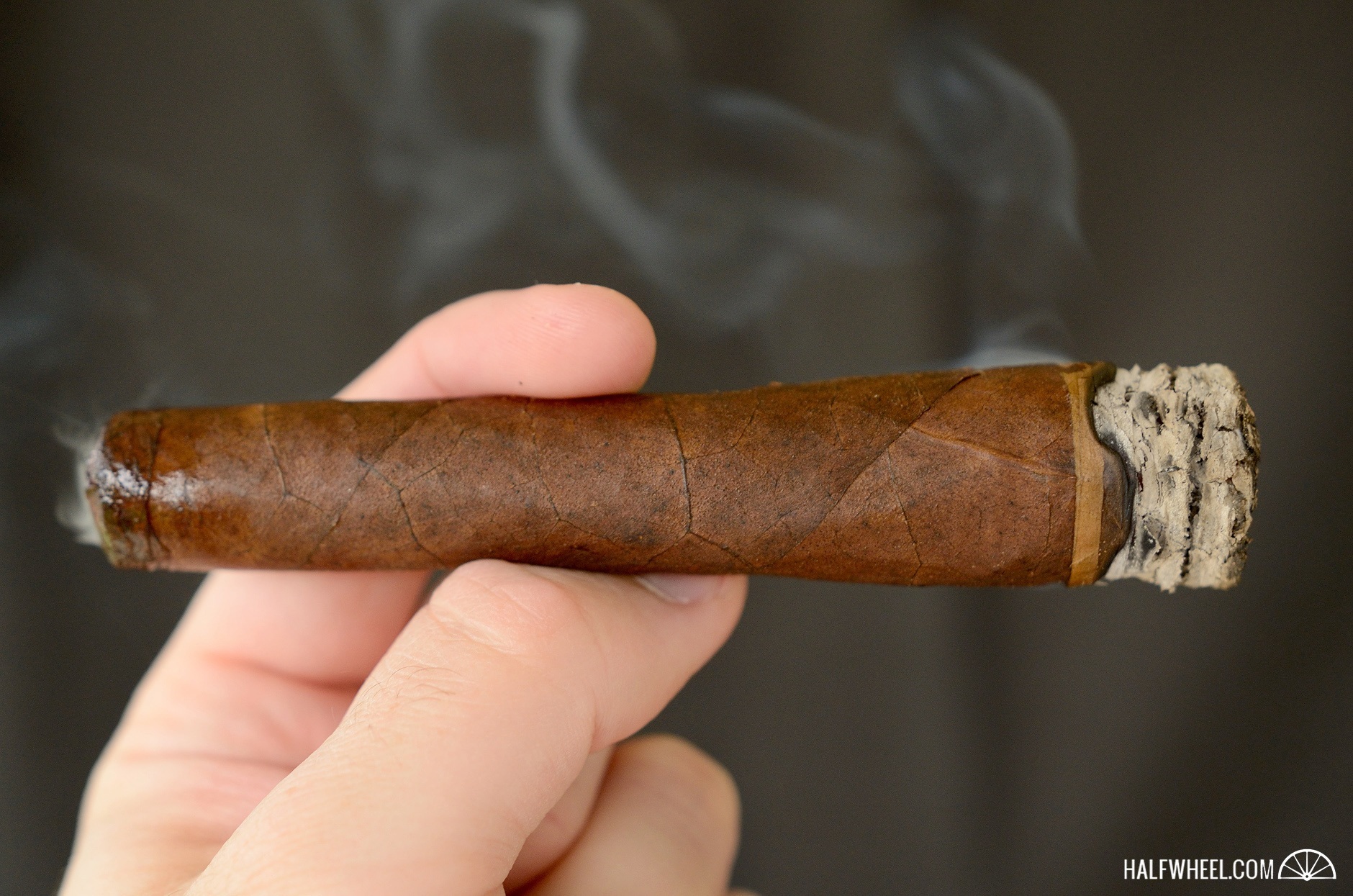 The second third continues with the same flavors – fruit and cedar up front and a peppery earthiness rounding it out. The burn goes a little off again, this time needing a quick touch-up, which brings it back around. Out of nowhere the cedar becomes surprisingly sweet and almost cotton candy like. By this time the strength is a medium plus, and with still half the cigar remaining I’m expecting it to continue to grow. There isn’t much change in the flavors save maybe a slight reduction in the sweet cedar that appeared. 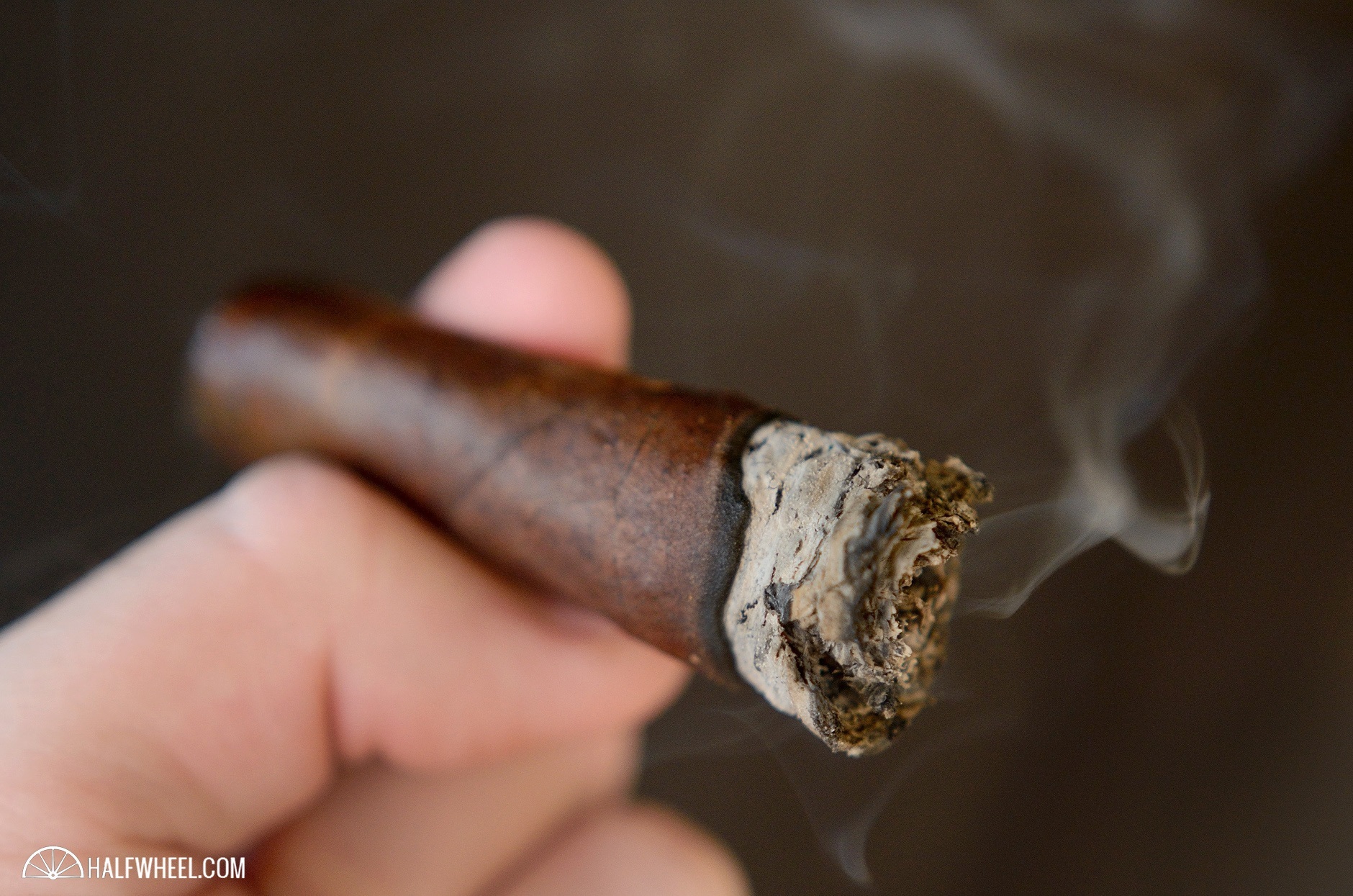 The final third of the WitchCraft sees more of the sweet cedar, fruit and a touch of leather presiding over the pepper and earth. As I had guessed, the strength is already at the full mark, almost to the point of making my head swim a bit. Burning it down to the final inch, the cigar remains smooth without any harshness and doesn’t get hot despite the continually shrinking ring gauge. 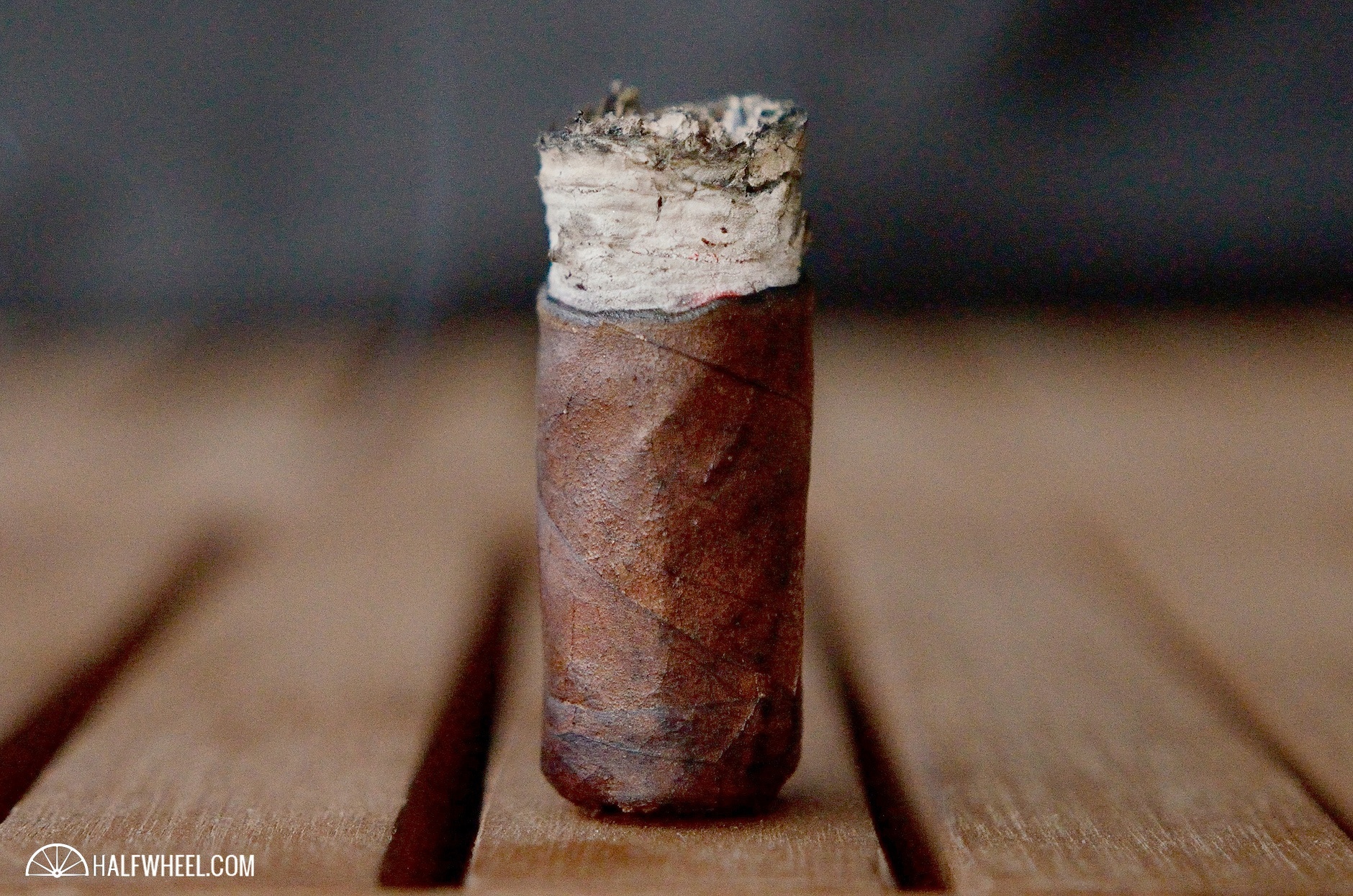 Being a fan of most of RoMa Craft Tobac’s blends, I was excited to see how an amalgamation of all four lines would end up tasting, and it turns out it was pretty good. The profile was pleasant, with a limited but well coalesced group of flavors. The minor burn issues weren’t anything to worry or complain about and overall the cigar featured very solid construction. Unfortunately it might be a little hard to get your hands on these, as they’re a fairly limited production and only available at one retailer. If you can though, there’s no reason that you shouldn’t grab a box as these as they are a pretty tasty cigar.