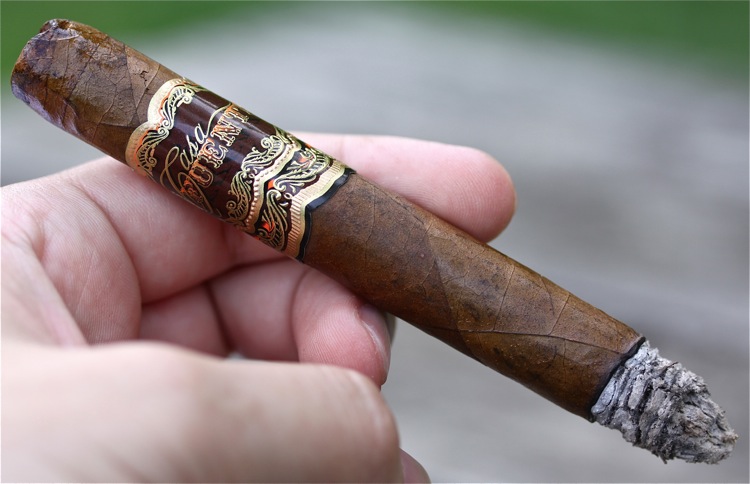 There are three retail stores that the Fuente family is associated with: Tampa Sweetheart’s in Ybor City; Holt’s in Philadelphia and Casa Fuente located in the Forum Shops at Caesar’s Palace in Las Vegas.

Each of the three stores have their own exclusive cigars made at Tabacalera A. Fuente y Cia, albeit the (two) formermost’s exclusives are bundles. The line given to the high-end Las Vegas showroom is anything but, it’s one of the most sought-after cigars on the market.

The humidor at Casa Fuente is legendary: BBMFs, Destino Siglo AL-13s, Chili Peppers—you get the idea, that is unless of course you aren’t a Fuente addict. For those that covert the works of America’s most storied cigar company, there is one line of cigars that is a must along with Casa Fuente’s signature mojitos, the ably-named Casa Fuente.

In 2005, the group of Fuente lovers who gather annually for Cigar Family Charitable Foundation events were given the exclusive premier of the Casa Fuente line at one of their annual gatherings.

However, the Lancero vitola was not included as the Phantom (lancero) was not one of the original four vitolas (Churchill, Belicoso Finos, Corona Gorda, Robusto). The original four would be released later that year and by the end of 2006 the Double Corona, Pyramid #2 and Double Robusto were added. (For more info, click here.) In 2007, Carlito made a few bundles of Phantoms in the Casa Fuente blend for his friend Jeff Lewis’ 50th birthday.

In the time thereafter, Casa Fuente would occasionally get bundles of 25–as opposed to the original bundles of 10–in small quantities and sell them. However, they were not a regular part of the humidor selection and were commonly not available. In recent months, Casa Fuente has begun to carry a lot more, and as such most can purchase the Casa Fuente Phantoms, but only two singles at a time.

However, if you know the right person and know the right bribe, after a bit of persuasion a few lucky individuals have been able to buy an entire bundle. Because they are not a regular Casa Fuente release and aren’t sold officially in quantities beyond singles, they aren’t offered in boxes. For the record, the bundles will set you back over $500 before sales tax plus bribes, which usually requires a few HTF Cubans. Like every other Fuente lancero, the Casa Fuente Lancero is the “Phantom” size, a 7 1/2 x 41 (slightly larger than the traditional size) pig-tailed beauty. Carlito Fuente sources the Cameroon from the master of African wrapper, the late Rick Meerapfel’s Compagnie d’Exploitation des Tabacs Centrafricains (CETAC S.A.) and for the Cameroon lover like me, this is about as good as it gets. (James Suckling wrote an article about CETAC S.A., you can find it here.)

Various shades of dull brown are littered with veins. It’s a tight roll that produces a pretty hard firmness, but nothing concerning. The medium-full aroma from the wrapper of the Casa Lancero is filled with nuts, brown sugar and a sweet leather. Contrast that to the foot, which has aged woods, veneer, cherry and a bit of spice, also in the medium-full range. It’s another day for the v-cutter, which does a great job like normal. Aroma from the top is very sweet with berries dominating warm cocoa and spice. Without fail the cold draw is tight. The Casa Fuente brings sweet nuts and berries with a vanilla and earthy finish on the cold draw. Lighting shows of the Cameroon as sweet nuts and earth fill the air. The first draw is warm cocoa turning into nuts, with cherries entering the mix before the finish of cocoa and sweet earth round out the full and lengthy initial flavors. The most striking part of the Casa Fuente Lancero is the richness of the flavor. Flavors of toastiness, cocoa, are surrounded by a massive sweetness and a phenomenal chewy earth while still showing nuts and herbs underneath the full profile. Finish is a contrast of aged woods, sweet grass, bitter herbs, cocoa and vanilla; full and lengthy. Retrohales deliver a punchy pepper the combination of the OpusX fillers and the Cameroon wrapper. Strength is slightly above medium from the start and seemingly always in the same place across the three Casa Lanceros I smoked. As you can see above, there’s a massive two inch chunk of light ash that holds on through almost the entirety of the first third. Changes in the middle portion of the Fuente product are best described as a decrease in sweetness. It’s the same full-on flavor this time with toasty herbs and cocoa dominating over cedar and faints notes of citrus. Finish is also full and lengthy with sweets, grass and a hint of earth. The rest of the cigar is virtually identical to the intial third, with the only change being the occasional coning of the ash, even as it holds on into the inch range. The draw is still tight with good smoke production of a toasty and cocoa aroma. Burn is about as good as it gets, straight and consistent from the get-go. Like the transition from the beginning to the middle, the Tabacalera A. Fuente y Cia. creation doesn’t really change a whole lot. Flavor continues to move away from the sweetness that defined the initial portion, now exhibiting a toasty herbal and earth core with some rich bittersweet note. Most of the finish is reminiscent of the aforementioned flavors, with the earth really taking the forefront, the one noticeable change is the addition of a prominent spice note on the still full and lengthy finish. At an hour and forty-five minutes, I put down my last Casa Fuente Lancero.

It’s medium-plus for the entire seven and a half inches. I would say, after a larger meal, the Casa Lancero is probably doable with good hydration as far as nicotine goes. It’s difficult to argue that the full and complex nature of the cigar isn’t going to overwhelm a new smoker’s palate, but, it wouldn’t be the end of the world. However, I would recommend waiting until smoke this until a palate is at least somewhat developed given the rare nature of the Casa Lancero, unless of course you call Casa Fuente your local. I smoked three of them, one of them came from a relatively new batch that was in the Forum Shops only three months before I smoked it and one of them had been in my humidor for close to a year. Was there a difference? A bit, but of the three it was hard to say that there was much progression at all, as these were utterly consistent. No matter what the Fuente product is, they seem to get better with age with the Opus X being the poster child for this phenomenon and cigars like the Ashton VSG being a quiet secret that somehow improves with substantial time in the humidor. Given the lack of improvement in one year, I'm interested to see what a few years in the humidor will do, but perhaps this is the Fuente that bucks the trend. As for the non-speculative merits of the Casa Fuente Lancero, it's an absolute classic, with a large price tag that is worth the price of admission every time.