Half of the six-cigar sampler have debuted elsewhere, something very much different from the first two samplers. The company started the concept in 2011 for the first STUDIO TOBAC World Tour. For the past three years, an early spring event at Tampa Humidor served as the launch for the samplers which are given out with box purchases attended by Bryan Scholle, STUDIO TOBAC’s ambassador. For the past two years, the company has also had special raffle items available at these events. Last year’s raffle items were the Cain Daytona NUb 460 and STUDIO TOBAC Cain Special Release, this year’s release is the Cain F 543.

Once again, the samplers are packaged in soft matte black boxes with a wood insert to identify each cigar, the boxes look like this: 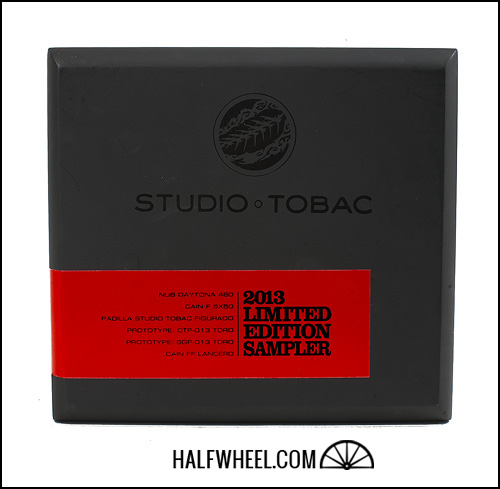 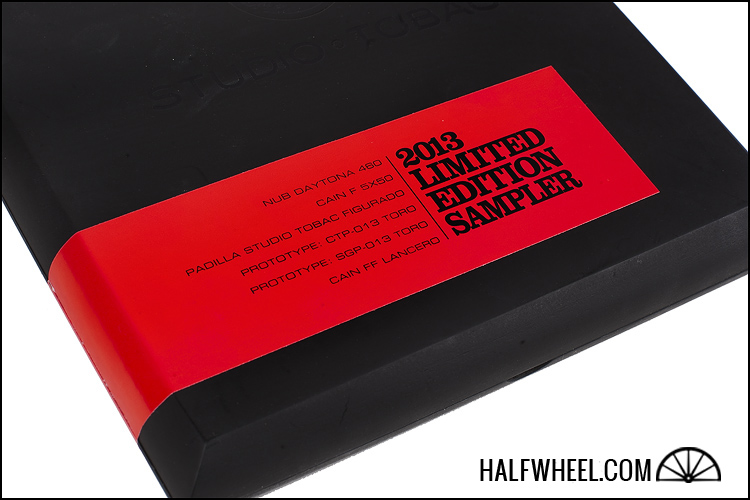 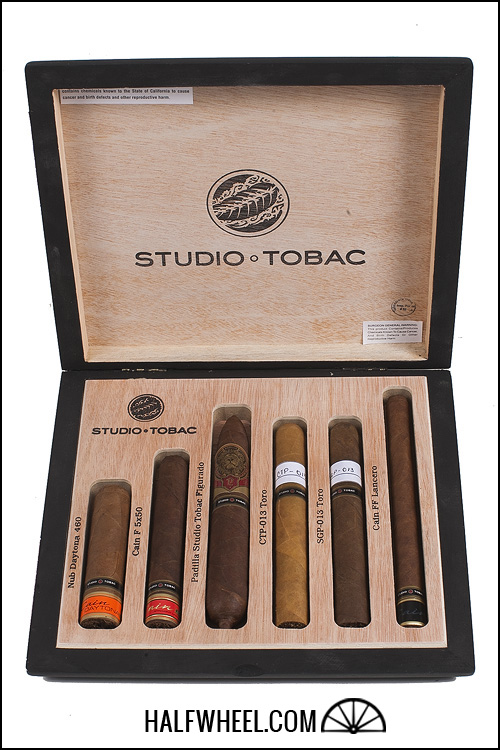 The Cain FF blend actually debuted in the first sampler in the form of a 6 x 52 Torpedo. For those wondering the difference between the Cain F and the Cain FF, here’s what Steve Valle had to say in his review almost two years ago:

This is the third Lancero for the Cain brand, the three are: 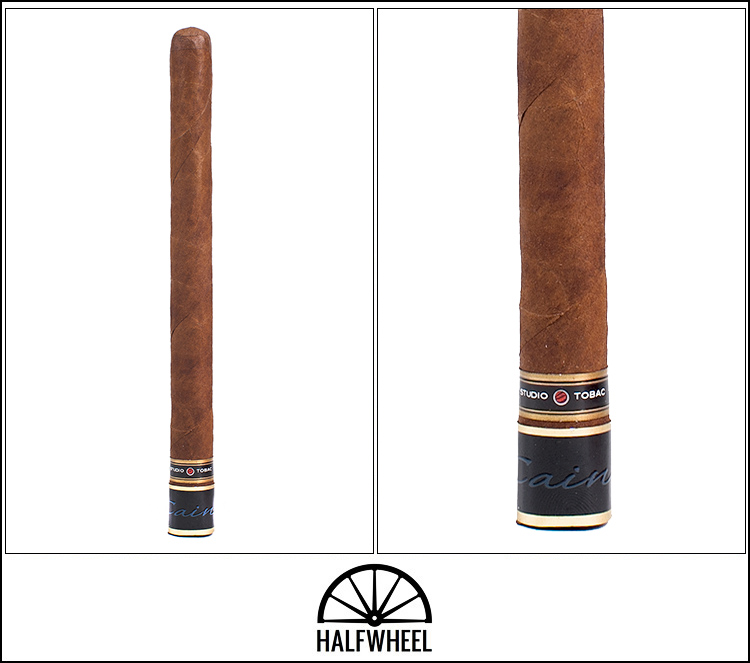 The Nicaraguan wrapper isn’t particularly dark, but it’s got enough reds to contrast the double black bands. Appearance-wise, there’s nothing special about the Lancero outside of the double footbands: the roll is okay, it’s a half-inch too short and I could appreciate a pigtail, but given the cigar is meant to be smoked, I’m not losing much sleep. From the foot, there’s a touch of manure, some sweet cedar and then an intoxicating mixture of pepper from the foot that leaves my nostrils suffering for a half minute or so. The wrapper has far less going on, barnyard and pepper, much calmer. Quite a bit of tobacco falls out from the cigar after cutting, but the draw is still shockingly tight. There’s some sweet earthy undertones, touches of cocoa and essentially no pepper; relatively light even absent expectations.

As I light the Cain FF Lancero this wonderful cereal note fills the hot Texas air. The first bit of smoke that hits the palate has little pepper, but a familiar cereal earthy sweetness emerges. By the second draw, I’m already wondering how long it’s going to be before I have to cut this cigar, shockingly, it starts to open up. By the end of the first third, there’s an inch and a half of ash, wonderful smoke production and a draw that is in a solid position as far as Lanceros go. Flavor-wise, there’s a natural sweet tobacco note that dominates with orange peels, bitter cocoa and vanilla as secondary notes. A muted pepper is deep in my throat, but mild, and a charred pepper helps the finish. 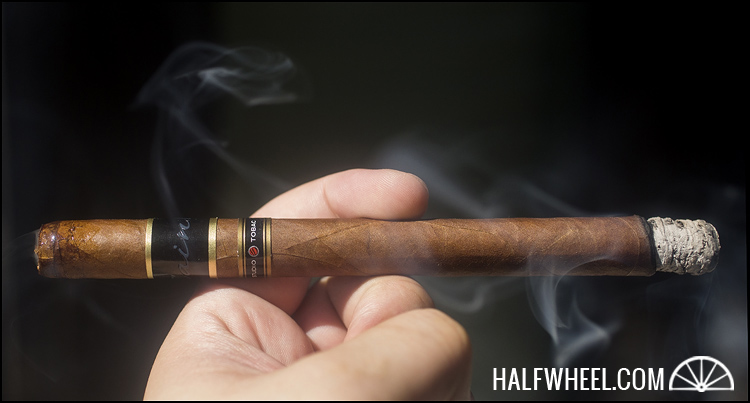 While the name might suggest otherwise, I am not overly affected by strength as the second third nears. In fact, I don’t find this any stronger than half of the Serie V’s and surely not double the strength of the Cain F. Full? Yes. Strongest cigar of the month? No, not even the strongest of the week. Charred earth takes a much more prominent note in the second third, although there’s definitely some left over sweet tobacco notes from the first third. For five minutes or so, particularly as the second third begins, the cigars both lost sweetness. It wasn’t that the first third was overly sweet, but the flavors evaporated while a saltiness helped to inflate the contrast. Through the nose there’s some apple notes, which was a great compliment particularly with the dark floral notes of the finish. Construction is similar to the first third, great. Noticeable now is the nearly non-existent burn line. 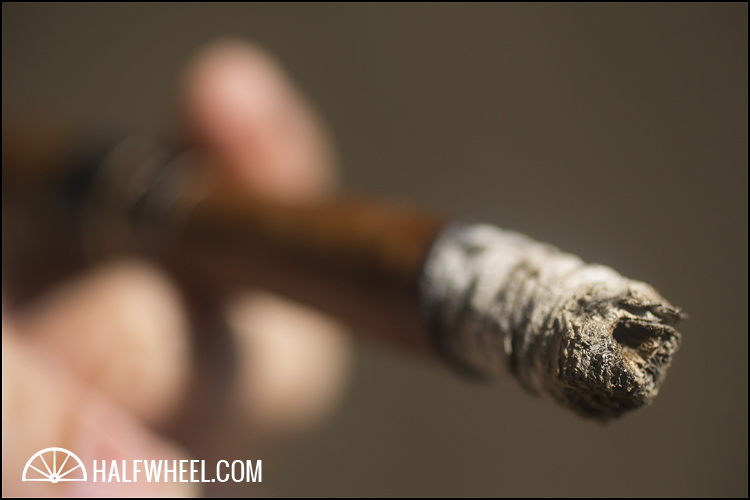 The Cain FF is significantly creamier and nuttier as the final third begins. However, the biggest flavor change is the noticeable decrease in the fullness of the flavor. While that occurs, the pepper remains consistent, meaning that for the first time in the entire length of the cigar, it’s playing a prominent secondary role, as opposed to relative afterthought. Bitter cocoa and grass also begin to mix in the palate, and oddly it works. With about an inch left, the cigar begins to heat up—perhaps a product of the Texas sun—and the flavors begin to mush. Rather than watching their decline, I call it a day shortly thereafter. The burn is still great, meaning that for the two or three minutes it takes for me to get the final shot set up, smoke is still pouring into the summer breeze. 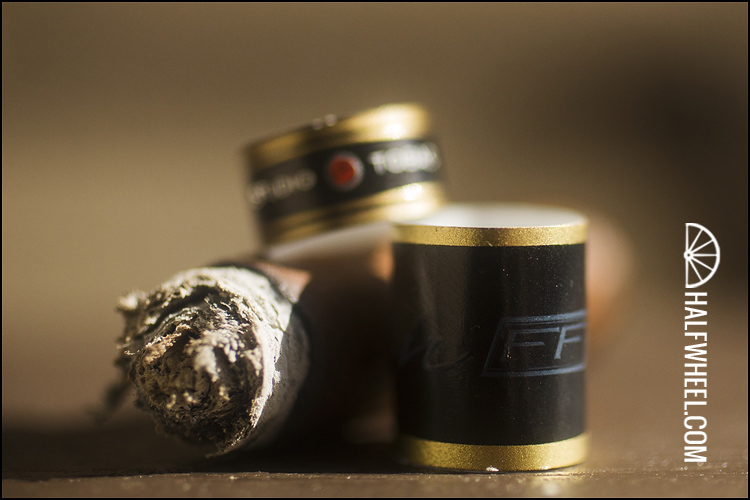 While the scores between Brooks and I's Cain F Lancero reviews (94 and 92 respectively) may not appear very far off, our opinions are. I think the Cain F Lancero is a good cigar—and when fresh, a very good cigar—but I don't agree with my colleague's opinion about that cigar's greatness. I particularly find difference with his liking of the Cain Daytona Lancero, a cigar that didn't do much for me. But I'm not sure any of that matters; in my opinion this is the best cigar STUDIO TOBAC has put out. It's a complete cigar: no gimmicks in size, strength or balance. Despite what its name might hint at, the Cain FF Lancero is a cigar that stands out for being good, not because it's able to overcome something that normally would be a hindrance. It might score the same as the STUDIO TOBAC Prototype Connecticut STP-EFG01, but this is the better cigar.