(You can read Brooks’ review of the Cain F Lancero, here.)

Following yesterday’s announcement that these were slated for release later on this year, it seemed like a great time to finally getting around to posting this. When it was first announced, I was a bit surprised as this is just not one of the blends you would think would be made in Lancero, but that was before I had gotten to try a few. Ian Hummel for Oliva sent me a few to write some thoughts about, so after the jump, my thoughts on the Cain F Lancero. The Story
The Cain F was introduced in 2009, and it has not been a favorite of mine. Something about the raw strength of the cigar which claims to be 82% Ligero just is not appealing. The idea of taking this already overly powerful blend and making it in a thinner ring gauge wasn’t something I thought would worked when Oliva announced this alongside the creation of Studio Tobac late last year, but then again I’ve been wrong before. Oliva sort of makes a big deal out of the lack of pigtail on these, not really sure why, but my thoughts.

The Habano wrapper has a medium earth color with some decent reds. Veins are pretty heavy, various sizes and in some more obscure looking shapes, but overall the wrapper looks pretty typical Cain F, hearty. Aroma from the Nicaraguan outside is a leather core with coffee, a generic sweetness and red pepper making up the medium-full profile. Packing is fairly loose, but firmness is still within the sweetspot. These were nearly identical in terms of construction across the two I smoked, just in case there were any doubts about the current happenings at TABOLISA. From the foot it’s lots of pepper surrounded by a sweet candy and a black licorice; full and utterly surprising. Lighting
For whatever reason the scissors seemed like the right approach here. After the “modern cap” is gone, the Cain F Lancero shows off an aroma that’s full of pepper, a decent cocoa, earth and coffee; once again full. Cold draw is about as good as they get in terms of tightness with the Nicaraguan showing off a combination of cocoa and leather with a piercing black pepper on the throat, full as expected. Lighting takes the Carolina air into a new place as the pepper and leather notes make it a bit heavier than at first. The Cain F Lancero starts with a medium chocolate with a bit of tingle transitioning into deep nuts with a medium pepper slowly developing on the lengthy finish. Draw is a bit tight, with good smoke production and medium-full to full flavor. First Third
Spicy cedar, check; earth notes, check; leather, quite good; red pepper, dominating the retrohale. Shockingly complex. The finish helps the case: leathers, earth and lots of pepper, still full and lengthy. While draw might be good, smoke production is just down right dirty, a constant flow of smoke (spicy and toasty on the outside) that magnifies at each draw. A medium-dark ash holds for about an inch, as much as I tried to extend it. 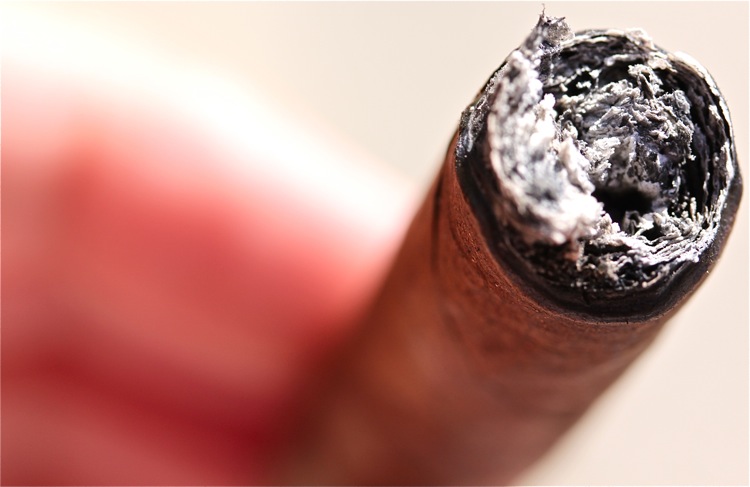 Second Third
Cocoa is the main addition to the core, which remains a spicy cedar, leather and pepper mixture. I must stress that the core, not the cocoa, is rather sweet, lacking a sort of roughness or concentration that normally goes along with this. Finish is much of the same with the cocoa dying down and the pepper gaining a bit of bitterness as it competes with the leather to try to be the longest flavor in the Cain F’s finish. Strength and body are both full, not shocking out of the Cain F, yet the Oliva does have a balance that is relatively unseen in my limited experience with the line. Final Third
With about two inches left, everything just increases. Flavor, body, strength, etc. There’s no new flavors, no loss of flavors; a bit of rearranging, but nothing new. Everything else is roughly the same as well. Body and strength increase a bit, certainly not doubling, but it’s an increase until the end.

For the Novice
No. It’s a Cain F, let’s leave it that. In the End
A good cigar? Yes. A very good cigar? Yes. Oliva dropped a bombshell yesterday when they announced pricing. $6.50? This will join the Liga Privada Dirty Rat as the newest crack stick. At that price, you take what is one of the best full Lanceros and put it in the price point that makes it one of the cheapest Lanceros ever made. I will say, this is a cigar that has a core, and it develops the core, and that’s it. The Cain F Lancero isn’t for everyone, but if you like strong Nicaraguan cigars, you have found your Lancero.