According to Al Argenti, this is the first review of the V32, so there’s your breaking news. It’s a cigar that I had honestly been really looking forward to, particularly given the other Entubars and the concept that was being approached with this even more unique project from Berger & Argenti. There honestly really isn’t much reason to extend this intro out any longer… Today’s Smoke
In March of 2010 we broke the news of the newest cigar from Berger & Argenti, the V32. There wasn’t a whole lot of information about the newest project from the new company of industry veterans that includes Kiki Berger and brothers Al and Mike Argenti, but we got word that it was going to be limited and even more unique. For those unfamiliar with the Entubar line, which debuted in 2010, Berger & Argenti rolls the cigars in the entubado method, which involves rolling each filler leaf into tiny cylinders, allowing for easier draw and improved smoke production. It’s a practice that is obviously time-consuming and relatively rare in the industry, with the only other notable use of it being found at the El Titan de Bronze factory in Calle Ocho. But, Berger & Argenti goes a bit beyond that, they also stick an extra tube of Ligero in the center of the cigar that extends out 3/8 of an inch from the normal foot. While Ligero is known to struggle when it comes to burning, the Entubar series in my experience has been nothing short of phenomenal in construction and smoke production. In addition to the standard Entubar line which features an Ecuadorian Connecticut Desflordao wrapper, Berger & Argenti has a Maduro known as the Entubar Quad Maduro. For the V32, there was an even larger twist, literally. Berger & Argenti decided to stick 32RG (equivalent to a half inch in diameter) full of Ligero in the center of a Nicaraguan puro.

According to Mike ArgentI:

ENTUBAR V32 is the most difficult and explosive cigar I’ve ever produced, but I’ve done so without compromising the brand’s balance or complexity… I was only able to produce 80,000 cigars on a limited run, not only because it is very challenging to make, but also due to the scarcity of top quality materials we’ve used to produce this exceptional cigar.

The cigar is featured in four sizes, all in boxes of twenty, which works out to be 1,000 boxes per size. For those wondering:

Today’s review is of the Khilla Korona, which is actually a Robusto, but that’s besides the point. The Jalapa Valley wrapper is littered with medium-length veins that are noticeable on the dark wrapper. In terms of color the V32 is dark and relatively dull, but it’s got a bit of depth that adds to the composure. Aroma is a warm cocoa note with a bit of aged tobacco, very sweet nuts and a touch of woods. The foot is rolled very tightly, shocking I know. My nose senses what seems to be a bit of woodsiness engulfed by a milk chocolate Hershey bar. Lighting
Aroma off the top takes the flavors from the foot and adds some sweet hickory and a decent amount of spices. Cold draw is relatively tight, which isn’t a concern with any Entubar, and features a sweet brownie cocoa with some black pepper and hickory woods, on the finish there’s some green pepper on the tongue, it’s short, but sharp. With the regular Entubar, lighting is pretty straight forward — just treat it like a normal cigar. However, the thickness of the Ligero channel means that you have to spend a lot of time with the lighter to make sure that you have lit not only the Ligero, but the other parts of the cigar. I really cannot imagine using anything beyond a single flame torch, and if you tried this with a soft flame, I feel like lighting could be a twenty minute task. When all is said and done, there’s plenty of smoke with notes of hickory, pepper and cocoa in the air. First draw from the V32 starts with a touch of white pepper on the tongue followed by some great woodsy and toasty notes. Midway through there’s some toasty cocoa joining the hickory and then a finish of raw nuts and woods, which get more and more toasty as the flavor develops.

First Third
I couldn’t get the official details from anyone at Berger & Argenti, but the first third of the Berger & Argenti Entubar V32 Khilla Korona tastes like some beautifully aged AGANORSA leaf. It’s lots of sweet brownie cocoa, some pepper and woodsiness. It’s got a lot more sweetness, a hickoryness to it, a bit more raw depth and contrastingly is put together more smoothly compared to any AGANORSA dominated stick, but it seems like what you could expect an aged AGANORSA cigar would taste like. Draw is slightly tight, but the smoke production of the V32, like its Entubar siblings is phenomenal. Tons of still smoke pour out of both ends with every little tug and then it sits in the still Carolina air, leaving me covered in a dense volume of smoke. Second Third
And it just gets better. There’s more sweetness, more spice and the same smoothness. In the second third there’s only a few minor changes: a more noticeable white pepper and a bit of an earthiness coming through — other than that, it is much of the same. Finish sees a much darker side, with the cocoa turning into a bitter dark cocoa. The V32 is a noticeable kick up in both body and strength from the QUAD Maduro, which puts it solidly in the full category in both categories. Construction continues to be much of the same with the draw closing slightly. 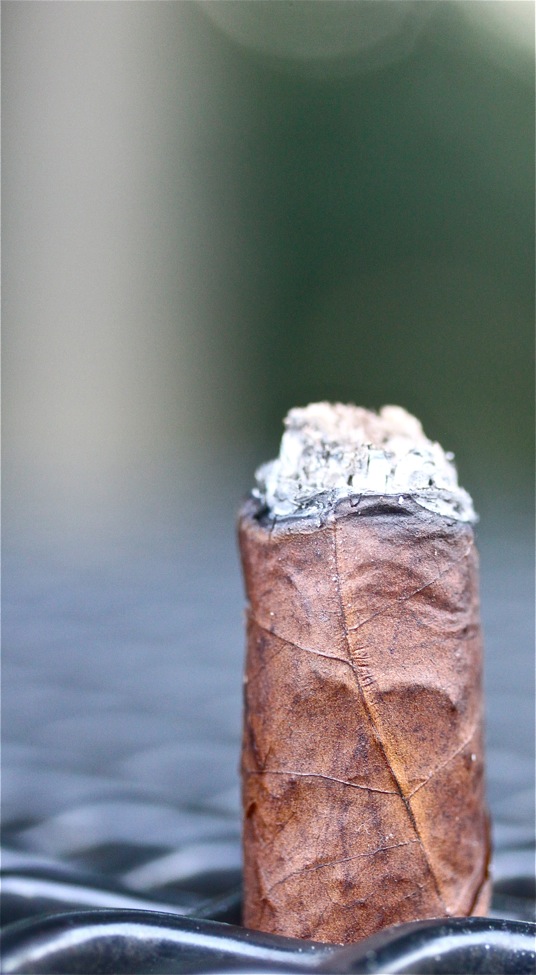 Final Third
There’s a bit of complexity that shows up towards the end in the form of nuttiness, but it’s also joined by some generic earth notes. Still, the flavor of the Berger & Argenti Entubar V32 Khilla Korona in the final third is much like the middle portion of the cigar. I will say, the flavor profile loses a bit of the chewiness that I found so dominant in the first, and still present in the middle portions, which was something that I really enjoyed. Construction, strength and body remain the same until the very end. For those that have experience with the Entubar, you will likely wonder why the ash wasn’t coning like it normally does, I can’t explain it, although it looked like an ice cream cone in the other sample I smoked. For the Novice
No. Berger & Argenti introduced another Entubar at the complete opposite spectrum from the V32, the Entubar CRV. I haven’t smoked it yet, but I get the feeling that it’s likely to be more up your alley. In the End
Gimmicky names aside, there’s one large problem with this cigar, the price tag. The price for the Khilla Korona, which is actually a classic Cuban Robusto in terms of size, isn’t that bad. But $15 for the massive Belicoso would be a hard pill to swallow. The Entubars have always been on the pricier side of things and Berger & Argenti has done a good job keeping retailers to their pricing agreements, however… the box price is tough. Al Argenti told me that: A. if many others in the industry were making this in the same manner they do, the prices would be a lot higher and B. there’s only a limited amount of these, so the pricing, which Berger & Argenti claims is higher because of the raw tobaccos used, is a bit easier to sell. At the end of the day, this will likely only be a five-pack for me and that’s just because of the price. These should be in stores sometime in the next three weeks.

86. This might be the best Entubar yet, it leaves you wondering why anyone would buy a QUAD Maduro over V32.