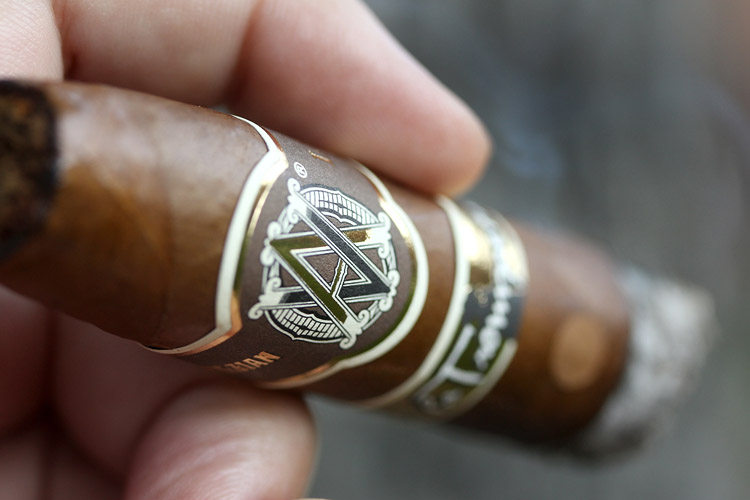 As has become the tradition, Avo Uvezian’s birthday brought another limited edition cigar, this time in the form of a trumpet, or so was the intention. This year’s version was named La Trompeta, the trumpet, featuring three small circles on the top of cigar to mimic the trumpet keys. 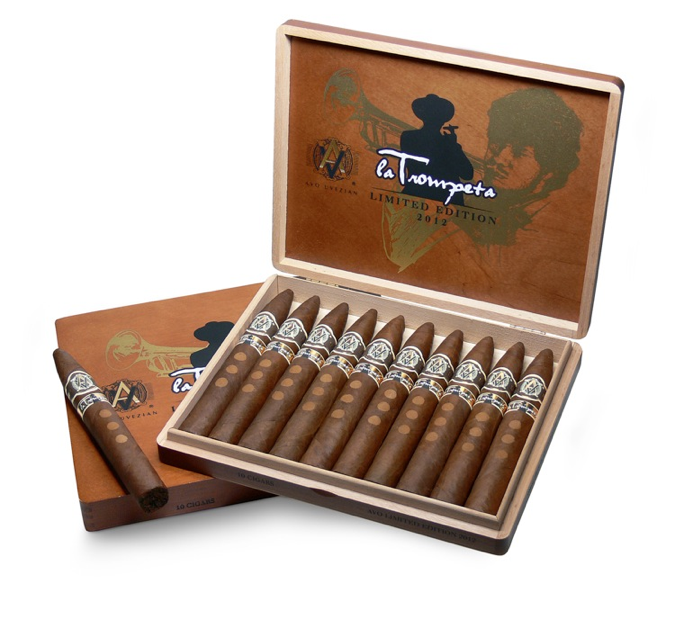 The press release went as follows:

March 7, 2012 (Tampa, FL) – Cigar icon Avo Uvezian is celebrating his 86th birthday with the release of his Limited Edition Anniversary Cigar, “La Trompeta.” The “86th Anniversary” marks the eleventh annual limited edition release from AVO Cigars, a tradition the legendary cigar composer started to commemorate his 75th birthday. The new AVO Limited Edition 2012 – ‘La Trompeta’ is a dedication to the Jazz musician and aficionado on his 86th birthday, a coronation of his lifetime work. Decades of Avo Uvezian’s work and passion are united in every single cigar, as well as tradition and established knowledge of the tobacco master, Hendrik Kelner. Through the subtle balanced Ligero tobaccos and the add-on of Peruvian Seco from exquisite tobacco fields, this special vintage is a medium to full- bodied cigar with complex notes in the aftertaste. The beautiful, slightly oily Ecuador Special Sun Grown wrapper “Seleccion 702” awards this cigar an indescribable spicy and balanced, multi-faceted experience. This cigar converts our thoughts in dreams. A dark brown lacquered box with rounded edges, covered with a stylish black print of the “Avo silhouette” as a cigar aficionado. Avo, as the musician with his trumpet, is radiantly printed with gold foil in the background. “La Trompeta” presents itself in a majestic and charming cigar format – a brilliant 6 ½ x 54 “Torpedo” – including the addition of a special feature to pay homage to the jazz trumpet, three small circular cigar leaf cut-outs are placed on the wrapper leaf to resemble “trumpet keys” – limited to 100,000 cigars worldwide with 50,000 cigars for the US market. “La Trompeta” will be available on March 28th at Select Merchants as a 10-count box with a retail price of $15.50 – taxes not included.

As is mentioned above, the cigar went to all retailers on March 28, but debuted at one of Avo’s signature dinners at the Grand Havana Room. The full domestic event listgoes as follows:

The boxes of the AVO La Trompeta look like this: 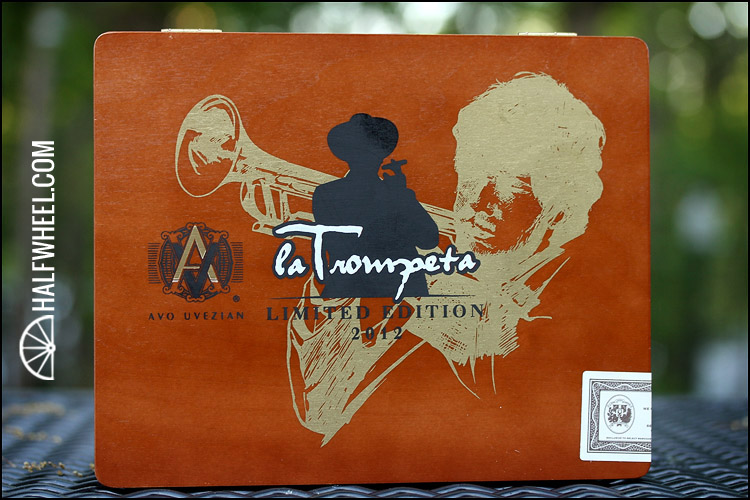 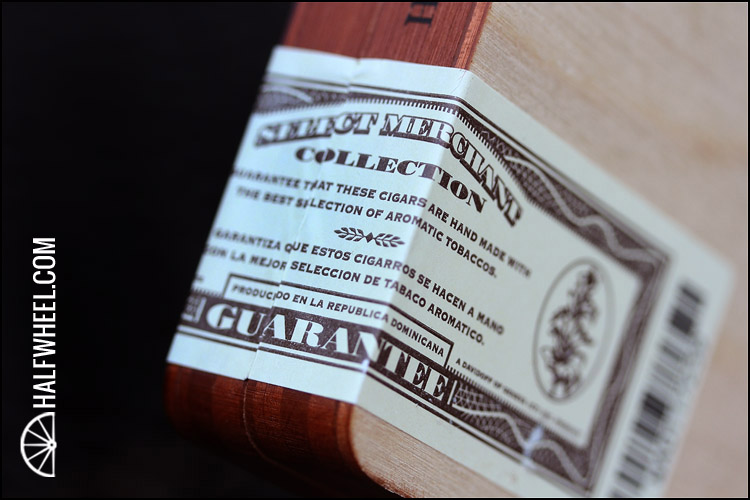 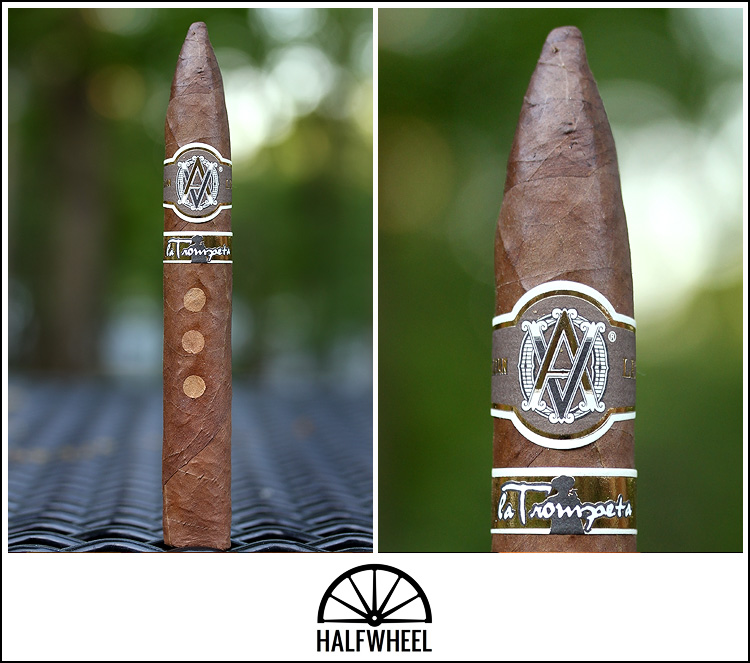 As is often the case, there’s not much point about nitpicking the wrapper. Sure, the veins of the Ecuadorian wrapper are a bit more pronounced than average, but the tobacco debuts a decent amount of oils and is near flawless in appearance. The La Trompeta has a really sharp Torpedo cap, I’m not sure how it makes it look anymore like a trumpet, but it’s interesting to say the least. Aroma off the wrapper is a bit stronger than I expected: leather and cocoa, quite sweet. From the foot, there’s a great gingerbread and graham cracker with some heavy ammonia. Cold draw from the La Trompeta is a sweet milk chocolate with earth and a bit of peanut, there’s touch of spice at the end. It’s definitely young and potent, but it’s barely medium-full.

The first third of the AVO La Trompeta begins with a great cocoa and bitter nuttiness that eventually transforms into a developed walnut. From the get go, it’s clear there’s a heavy dose of Dominican tobacco that has been aged. After about ten minutes, the development seems to stall a bit with nuts and earth up front, a bit of creamy sweetness underneath and a plethora of Dominican spices in back. It seems like the flavor profile for the Limited Edition 2012 is about to explode as the first third closes. Smoke production is a bit below average, but the burn line is causing far more problems. 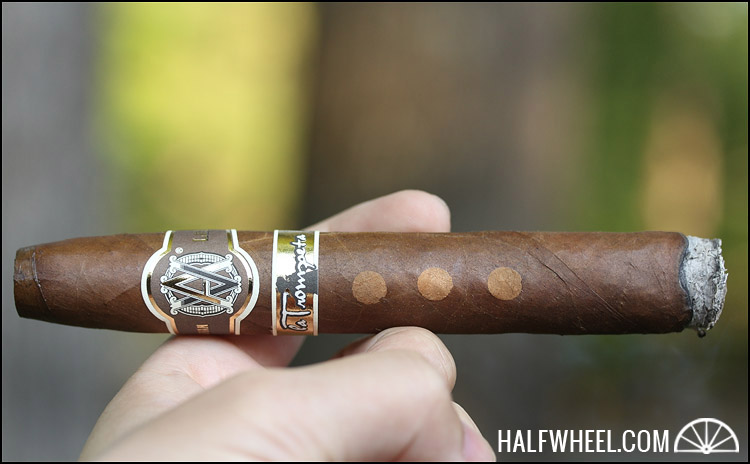 Into the second third and the burn issues have already reached problematic. On one of the three La Trompetas I smoked, the burn fixed itself midway through, the other two were constant struggles. Flavor-wise, grassiness. All of a sudden, there’s an intense amount of dark and heavy grassiness that is really unlike any Davidoff I’ve had before. It’s still a bit young, but its layers seem to the biggest issue in terms of fully deciphering it. There’s a bit of creaminess left over from the first third of the AVO, but the cocoa is gone now fully dominated by the aforementioned grassiness and the pepper from the first third. 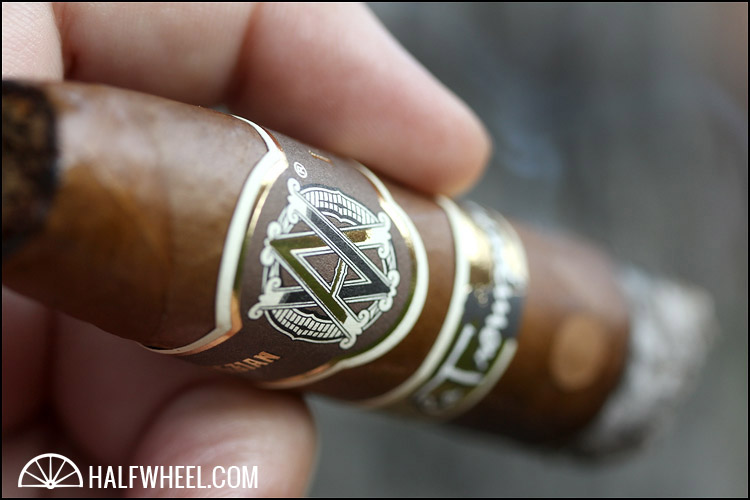 The final third didn’t really exist in the first two of my attempts with the La Trompeta. Flavor-wise, there wasn’t much change, but pretty quickly into the second third the Torpedo became harsh and began to unravel in terms of profile. On my final attempt, I soldiered on through what seemed like clearly the end. Unfortunately, the aforementioned construction issues seemed to plague the closing third in new ways leading to the cigar going out numerous times and leaving it bruised and battered, a la the picture below. 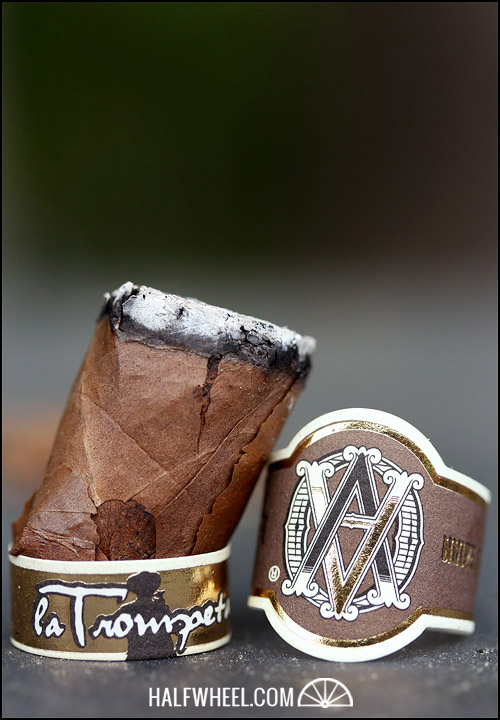 Of all the signatures in the cigar world, I cannot think of one that is as polarizing as the Davidoff grassiness associated with Henke Kelner and Eladio Diaz. Some people find it to be one of the largest turn-offs in a cigar, while others swear by its brilliance. I'll admit that it's not my favorite of flavors, but overall, I enjoy Davidoffs more often than not. The 2012 version of the AVO Limited Edition is a bit perplexing in this regard. In my early experience, there's no grassiness worth mentioning in the first third, but the second and final thirds deliver the signature at a potency I can't say I've found in any other Davidoff, and it should be noted, this is not White Label. If you enjoy AVO, White Label and Zino — this is a cigar that you have decent odds of enjoying. If you don't, it's hard to imagine that at this state you are going to find this tolerable. For me, La Trompeta is a young cigar with a bit of a shocking potency and richness, a bit of a more brash rendition of the normal AVO profile in the first third followed by a grassiness in the latter thirds in similar style.