Late last year, Arturo Fuente shipped a small batch of unknown cigars somewhat rightly named, Unnamed Reserve. Even from the line’s debut last year, it seemed destined there would be a 2013 release of the cigar, something that was confirmed to us at the 2013 IPCPR trade show and convention when we were handed samples of two sizes of what were described as the 2013 version of the cigar.

Arturo Fuente has little interest in talking about the cigar, even less than it did last year, but there are a few things known. The boxes retail for $337.50 plus applicable local taxes—up from $8.50 per cigar last year—with ten 5 1/4 x 48 robustos and ten 5 3/4 x 50 toros in each box. The boxes once again say “sun grown” and they started appearing in stores in late November. Quietly, some Fuente employees have said that the release is smaller than the 2012 shipment.

Here is what all three Unnamed Reserves look like:

This is a picture of the IPCPR sample and the production version. They appear largely identical and would indicate Fuente had finalized this blend by July at the latest:

The boxes of the Unnamed Reserve feature two rows of five toros on the left and five robustos on the right. They look like this: 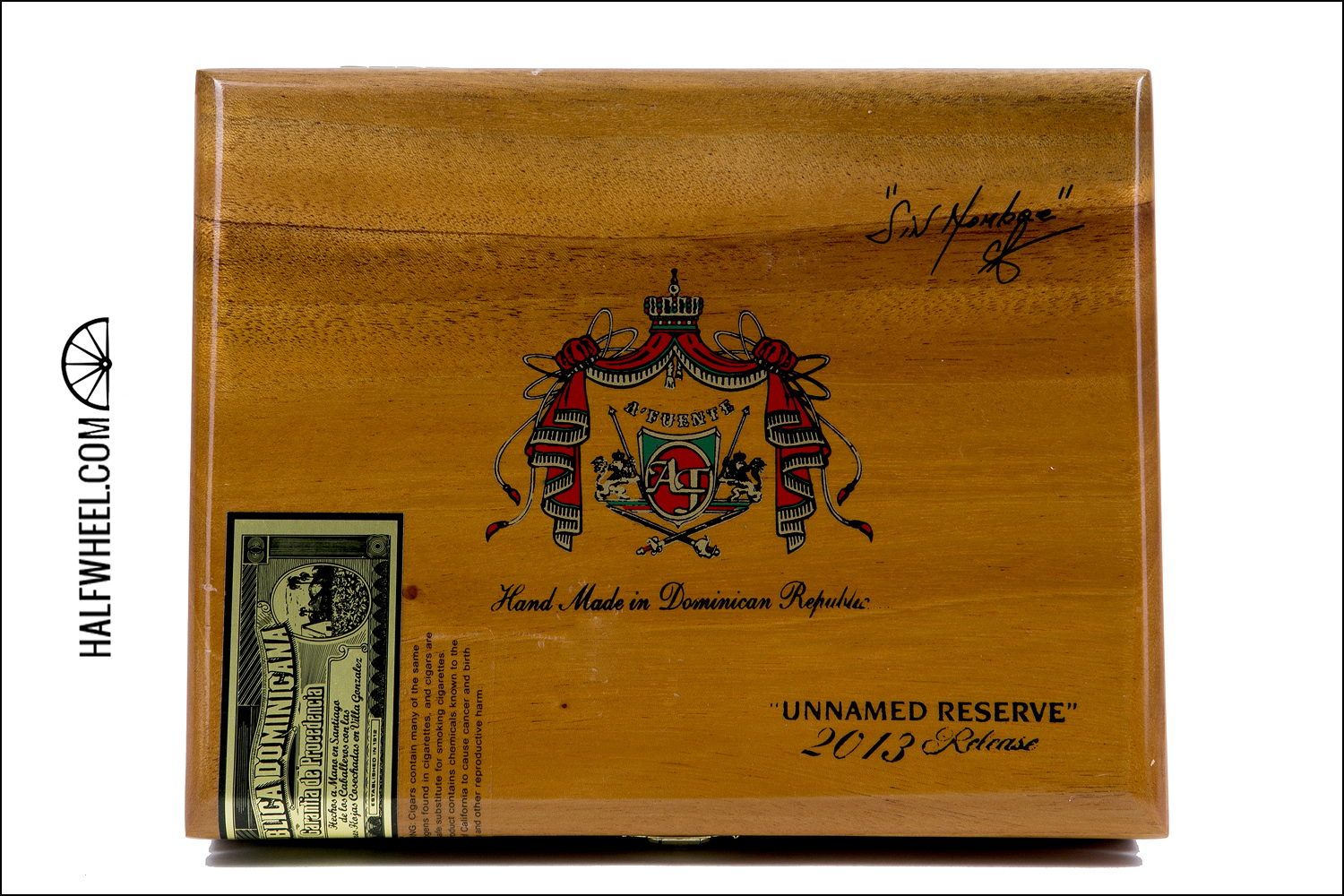 The wrapper is much lighter than last year’s version with a semi sand-colored wrapper that looks only a bit off from Don Carlos. Once out of the cellophane, there’s a sweet mixture of grainy cereal, leather and berries from the box-pressed toro. I get a weird mixture of ketchup, berries, cedar and leather from both versions of the 2013 Unnamed Reserve. I did not find it at all present in the 2012 release, although all three cigars had sweetness on the cold draw.

Interestingly, some of that ketchup note lingers into the start of the first third, although it’s behind cedar, salty walnuts and a bit of a more generic sweetness. A few puffs in, a toastiness begins to overtake the profile, which also sees touches of burnt candied pomegranates—a flavor you can find while making real grenadine—the salty walnut flavor and touches of mild pepper. There’s a strong white pepper and salt note through the nose at two points of the first third, but it’s hardly consistent. The draw is a bit open, smoke production from the Fuente is about average and the medium grey ash holds for an inch. Nothing to complain about, nothing to rave about. The velvet texture stays at the back of the throat for the second third of the Unnamed Reserve Toro, but the rest of the flavor smooths out. The toastiness now has a sweet herbal flavors—albeit not floral—touches of oregano, lemon grass and paprika through the nose. There are a ton of spices on both the tongue and through the nose, although they never overtake the semi-sweet profile. The pepper has largely died down, particularly if you are able to separate the roughness of the body, which seems unrelated to the pepper. Elsewhere, construction remains the same, at least until I take the band off. I begin the final third, by completely destroying the cigar by removing the band. While looking at my notes, the flavor profile didn’t seem to be affected as I got almost identical flavors between the two samples, but the burn of the Unnamed Reserve was obviously affected. It’s a glue problem, also not a new problem for Fuente. As for the flavor, the toastiness takes on a bit of a coffee-like touch, which is a nice addition. The spices are dying down with the nutmeg largely the only identifiable one. For a few puffs right around an inch and a half left, I get a grapefruit note. Eventually, the cigar goes out, more on why below. This is a cigar that benefits from the fact we do not consider price as part of the rating. It is not a $17 cigar, not a cigar worth nearly double the money as its predecessor, not worth the hassle that involves tracking them down. In many ways—while the flavor is very much Fuente—the nature of the cigar is very much the anti-Fuente. What companies like Padrón and Fuente, arguably the two most respected within in the industry, have going for it as that its best cigars are widely-available, at good prices, without the marketing frills of 18-year-old Cuban-seed wrapper and without the hassle of what largely makes up the type of cigars we review on this site. While there is a lot of disappointment in what Fuente has done to this release, only in its second year, the cigar stands on its own and is a significantly better product than the majority of what I review on this site.