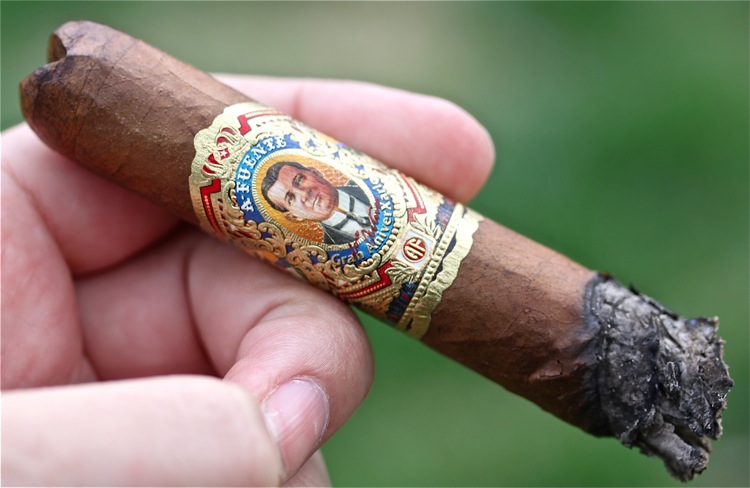 Over the past few months I’ve acquired a few of these in both wrappers, some I’ve picked up at a more reasonable price, others given or traded me, whatever the case… I’ve been fortunate. These were originally made to commemorate Fuente’s 90th Anniversary (hence why the band says 1912 and 2012), however due to packaging and other reasons, they weren’t released until 2008. Like a lot of the higher-end Fuente products, Prometheus was given the rights to distribute the Gran AniverXario, packaging a total of 96 cigars (48 of both wrappers) in 96 humidors. Most assume the value of the humidor to be $1,800, which makes the cigars themselves worth just under $60. I have seen them a few times being sold in retail stores, all well over $60, but I paid $30 or less for those that I bought, which seems to be the going rate on the secondary market. Like a lot of Fuentes, there is more than just a simple story, and like always, I’ll let someone else tell it. Promotheus’ website describes the story: 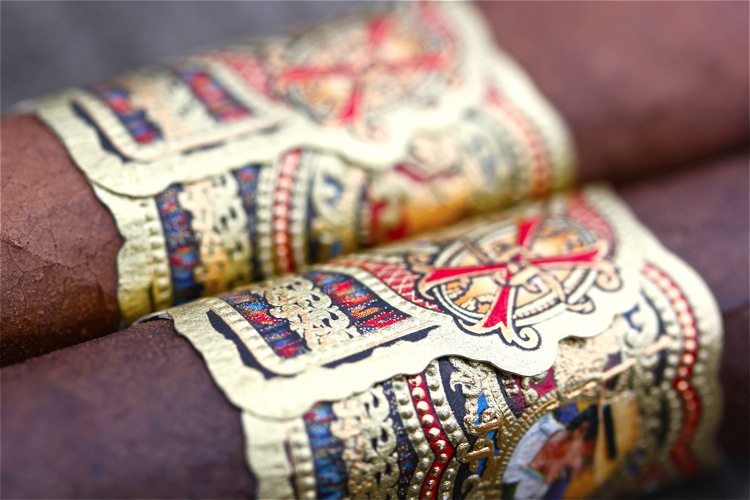 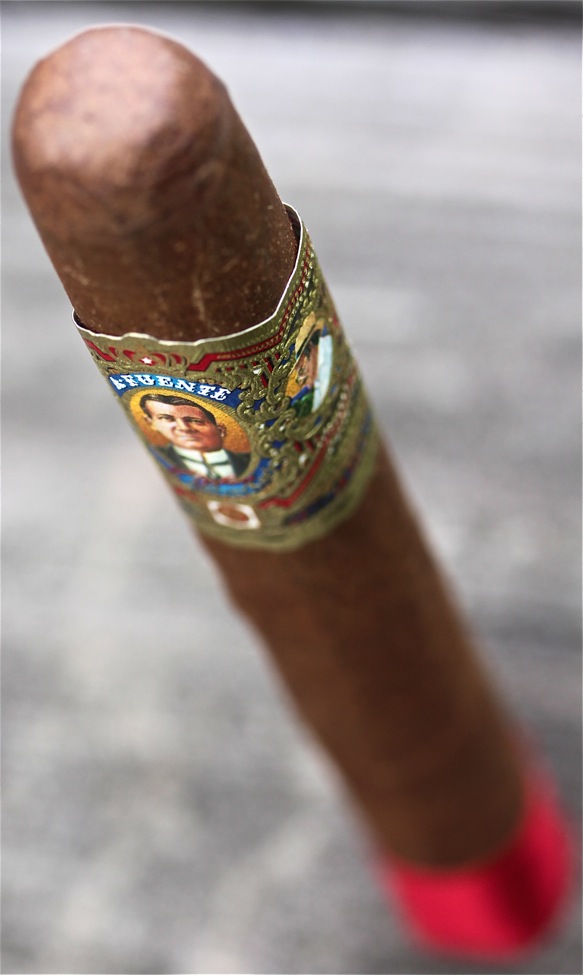 There are a few other details that are quite interesting, Moki of Vitolas.net (one of the foremost experts on all things Arturo Fuente, has this to say:

In addition, the Prometheus marketing materials state that the Don Arturo Gran AniverXario cigars have been aged for 7 years… meaning they were rolled in 2001, the same year the Don Arturo Destino al Siglo “13” cigars were rolled.

Normally getting one cigar to stand on a slightly windy day is difficult, getting two? The first thing you notice, the band, everytime. There are tons of little details hidden in the band: 2012 (Fuente’s 100th Anniversary), portraits of Carlos Sr. and Carlito, a red signature below Arturo’s portrait and my favorite trait, the Opus X logo on the back, holding the ends of the band together. The Rosado wrapper seems a bit more solid than a typical Opus X wrapper, with a little less sheen. Aroma is pretty strong with a rotting nut (not as bad as it sounds), mixture of mildew and a sweet brown sugar. The foot has similar characteristics, with a heavier mildew, earth and brown sugar. While veins are relatively light, I will say two of the Gran AniverXario Naturals had noticeable imperfections thanks to what looks like stems on the outside. In general, there’s close to no resistance, even with what is a beautiful above average packing. The difference between the two sizes of the Gran AniverXario becomes rather noticeable when you pick up both, although pictures don’t really show how much larger the Natural is versus the Sun Grown.

The cold draw always was on a varying side of loose with mild cocoa and a bit of an apple like finish, nothing too exciting. It takes a bit longer than I would have thought to get it going, but it’s a nice aroma of a toasty cedar with cherry. The Gran AniverXario starts with a disappointing amount of smoke production, although a nice cherry cedar that transitions into cocoa, woodsy and earth finish with spice from the middle of the tongue; medium all the way around. Calling the core earth flavor complex would be a lie, but it has a bit of depth. Brown sugar and spices, are once again sweet, joining a creaminess that helps to provide secondary accents on the overall flavor profile which falls somewhere between medium-full and full. The spices build through the finish, which also adds some powdered cocoa, once again medium-full in flavor and fairly length. Draw is still a bit open, which results in well below average smoke production. The aroma simplifies to a mainly cocoa over toasty note. 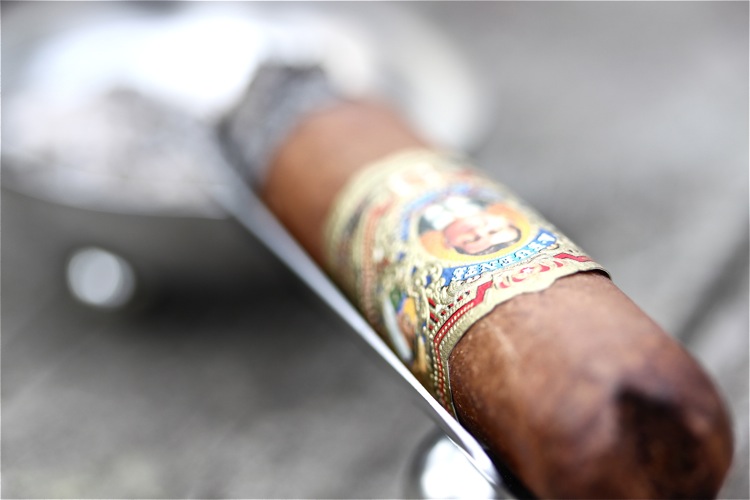 This is where things begin to fall off. There’s additions of toasty, cedar, earth and a noticeable pepper, although it all just turns into a mush of medium-full flavor with little harmony. Finish is earth and cedar up front, with harsh pepper on the middle of the tongue. Strength takes a jump from medium to medium-full. Fortunately smoke production tends to increase, but I relit quite a few times throughout the Gran AniverXarios I smoked in the middle portions. Like the first third, the Fuente’s medium grey ash holds to inch chunks and then falls off.

And this is where the cigar completely fell off. A harshness dominates an earth and cedar mixture as the flavors just begin to disappear. Finish provides the first look of herbs, but at this point, flavor is gone. Construction is consistently better, with smoke production increasing on a draw that moves more medium. Eventually, things need to end. 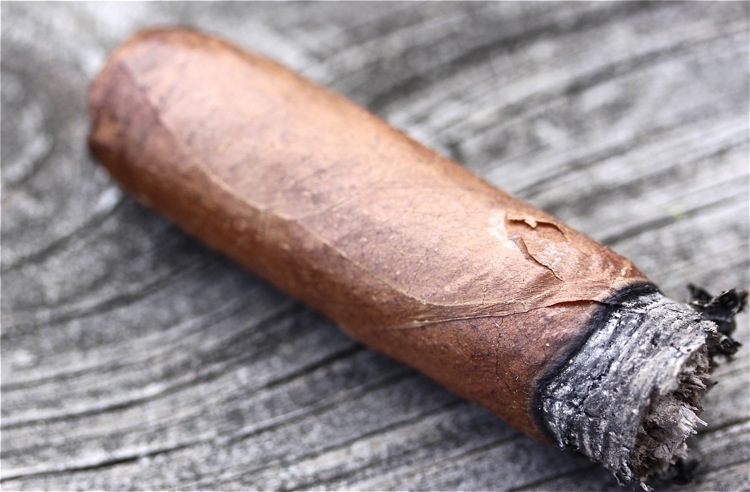 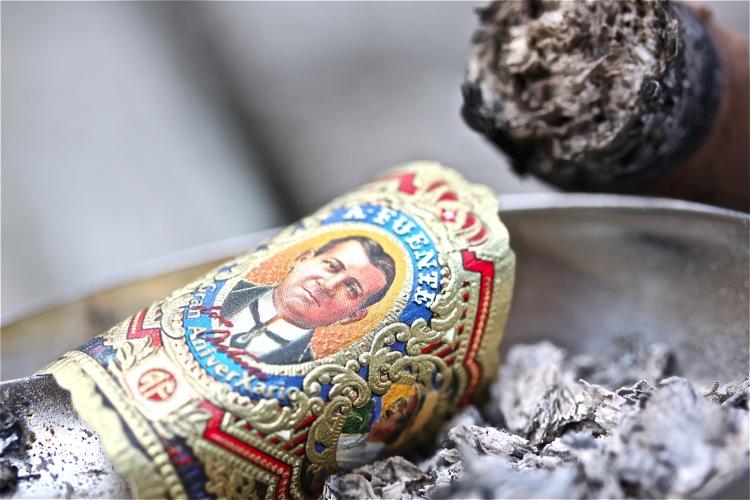 The Bottom Line: My first thought after putting down the natural version of the Arturo Fuente Gran AniverXario was, they really should call this an “858 Vintage.” I honestly have no clue what an 858 with x amount of age on it would taste like, but I can’t imagine it would be much more boring than this. It’s such a shame, one of the most ornate bands, boring flavor. Constructed beautifully, seems to never burn right. It seems as if the cigar has lost something, but I never smoked these fresh, so I can’t make that assertion entirely. However, the Gran AniverXario seems well past its prime. The mutiny of flavors just blends together and eventually collapse as the final third approaches, never bringing the complexity, depth, richness or smoothness that some of Fuente’s products can bring. It’s really a shame. This isn’t a matter of flavor profile just missing, this is a matter of a cigar that really just isn’t very good. And that’s before we get to the price. I honestly would love to tell you that this cigar is the crème de la crème of Fuente, that this is a cigar you save for the specialest of specialest occasions, and a cigar that creates experiences that are unforgettable and unrivaled. That might be true about the band, but the tobacco underneath is from from it.