At this year’s Cigar Family Charitable Foundation Celebration (CFC), the annual event hosted by the Fuente family in the Dominican Republic that raises awareness and resources for the aforementioned charity, attendees were handed a new size of the company’s Añejo line.

It measures 6 5/8 x 44, but with a unique torpedo cap. While it very easily could have followed the path of many cigars handed out at the annual gathering over the years, i.e. never being released for sale, attendees were told it in fact would become an addition to the company’s Añejo line. Things oftentimes change in the cigar industry, so when the cigar appeared at last month’s trade show, it seemed like the possibility of the new Añejo was about as sure as these things come. 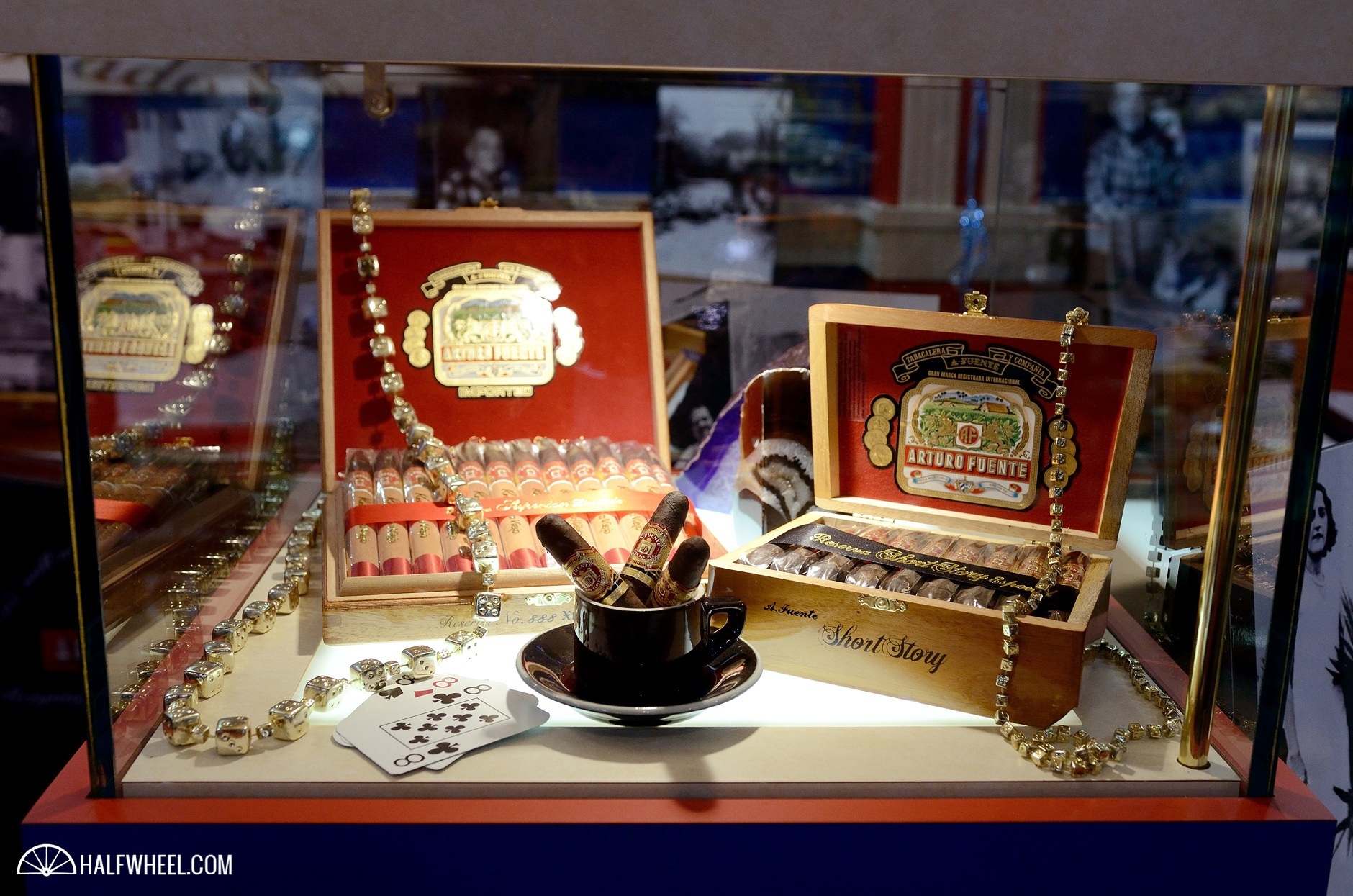 According to the box, it’s called Arturo Fuente Añejo Reserva No. 8-8-8. Earlier this week, retailers that took advantage of the company’s trade show special offer were notified that it was on its way, alongside Fuente Fuente OpusX Angel’s Share Reserva D’Chateau, Fuente Fuente OpusX Perfecxion A and Hemingway Short Story Maduro.

It brings the total commercial Añejo releases up to eight.

There have been a handful of Añejo vitolas made over the years that have not been sold, except at charity auctions, including the ultra-elusive Añejo Phantom, a lancero. 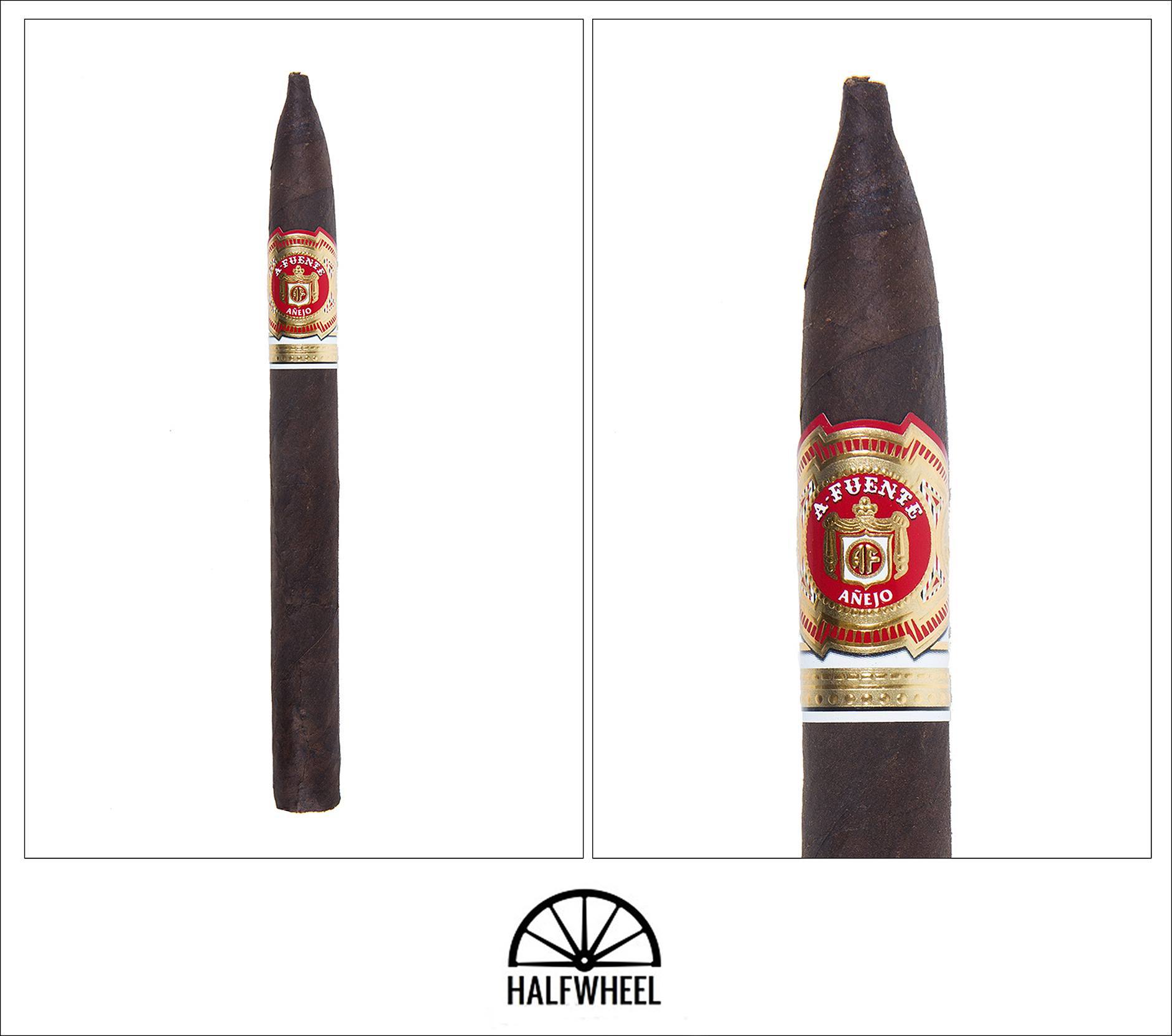 The cigars will come like many Añejos, in cedar sleeves, but my samples were without the dressing. Despite the cellophane, there’s only faint hints of barnyard, leather, some cocoa and pepper. From the foot, there’s much more: sweeter woods, touches of vanilla and a bit of butterscotch. The cold draw shows a sweet woodiness I find across many Fuente Fuente OpusXs and Añejos along with some pepper on the lips, fairly typical for my experience with the line.

As soon as the flame ignites the foot, the summer air is filled with a rich burning cedar and oak mixture along with peppercorns. Regarding the initial flavors of the No. 8-8-8, it’s sweet woods that bitter out into espresso and a drier nuttiness. Once again, the pepper is fairly restrained, a fair bit on the lips and some hints on the nose. By the third puff, the Añejo has become drier and more bitter with an earthiness overtaking some of the dominance of the wood and mild pepper engulfing the middle parts of the tongue. The finish is quite similar to that in the first third, with nuts and woods dominating, although sweeter flavors of chocolate and bread add a bit of depth. Strength is full, while body is medium-full. 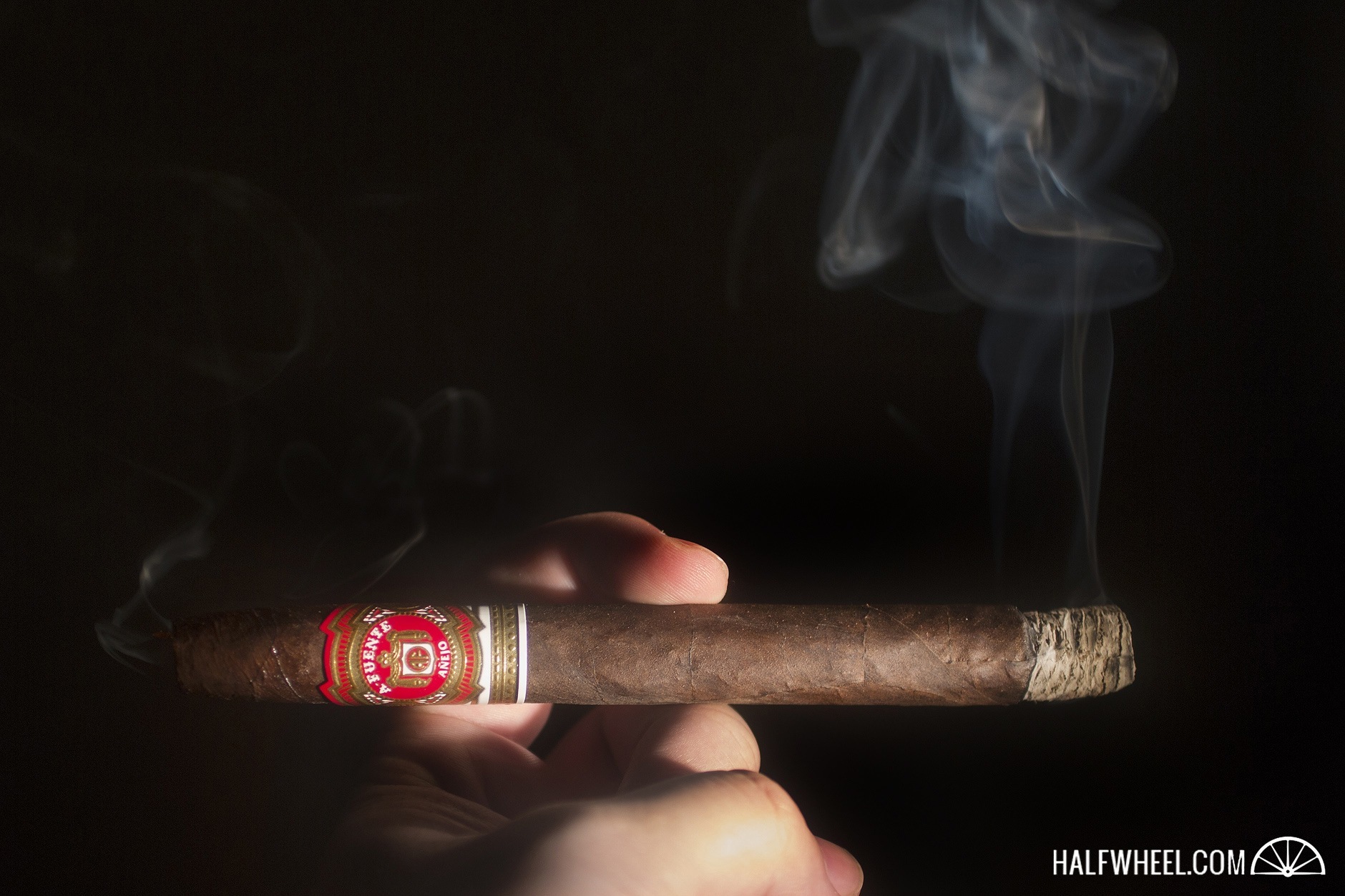 The Añejo Reserva No. 8-8-8 has an easy draw, slightly open for the size, but it’s never problematic. While there’s not an abundance of smoke when the cigar rests in my ashtray, a quick pull reveals a few clouds of a medium gray smoke. As for the flavor in the second third, there’s a very similar woody and earthy flavor, although whatever pepper was found in the first third is gone. At the midway point, a touch returns in the form of chicle, the natural version of gum, which has a peculiar flavor. With a bit less than three inches to go, an espresso flavor adds to the mix, a clear secondary flavor, but a welcome addition. 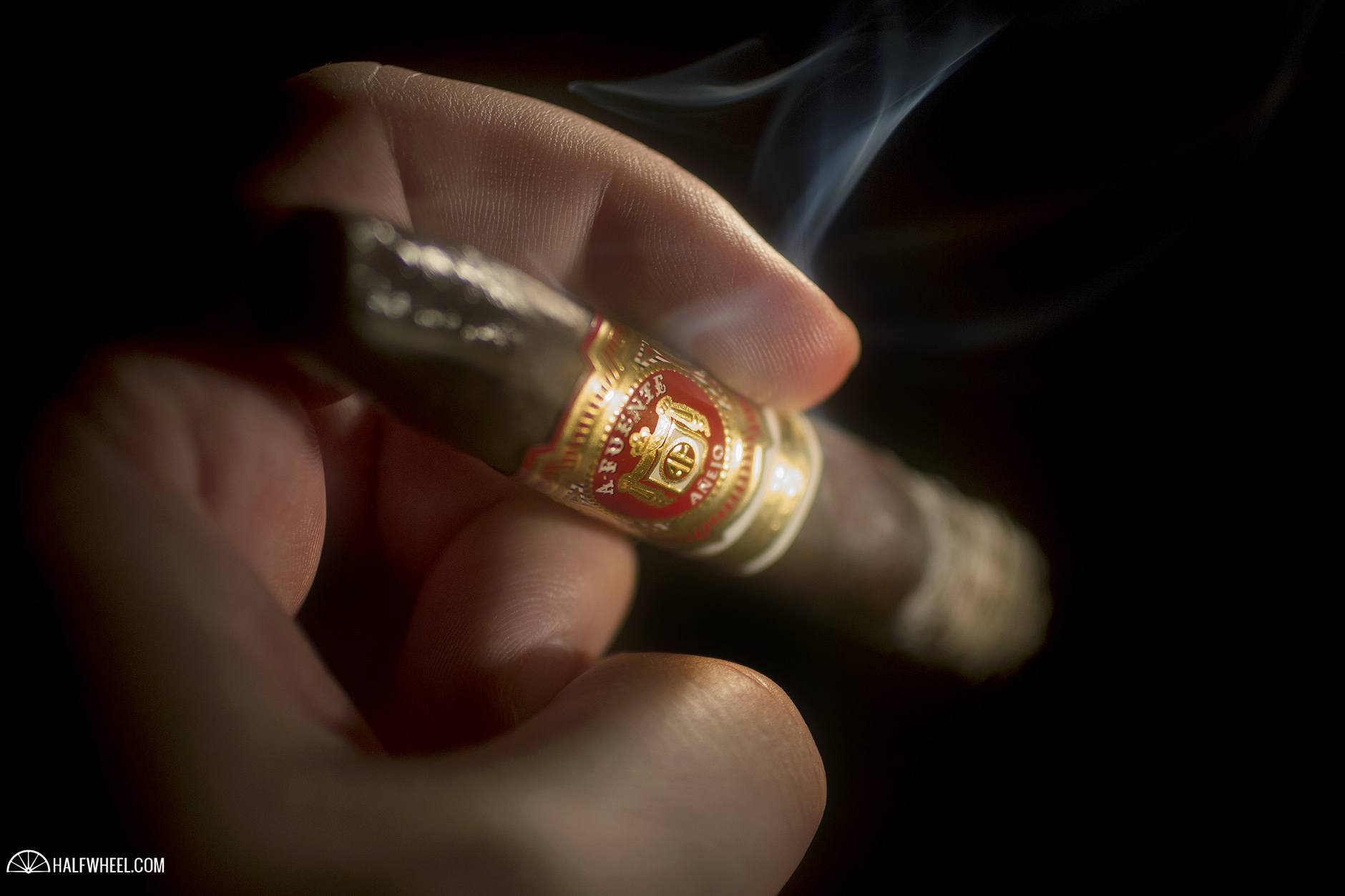 That espresso note gains to join the earth as the other dominating flavor with the woodiness fading. A short-lived red pepper makes an appearance on the finish, but it does not stick around for more than a half of an inch of the No. 8-8-8. As has been the case from the start, the strength is full while the body and flavor are both medium-full at the finish. It’s a heavy dose of nicotine, a good reminder that despite Nicaraguan cigars currently dominating the list of which is strongest, one of the Dominican’s more notable names can play the game just fine. 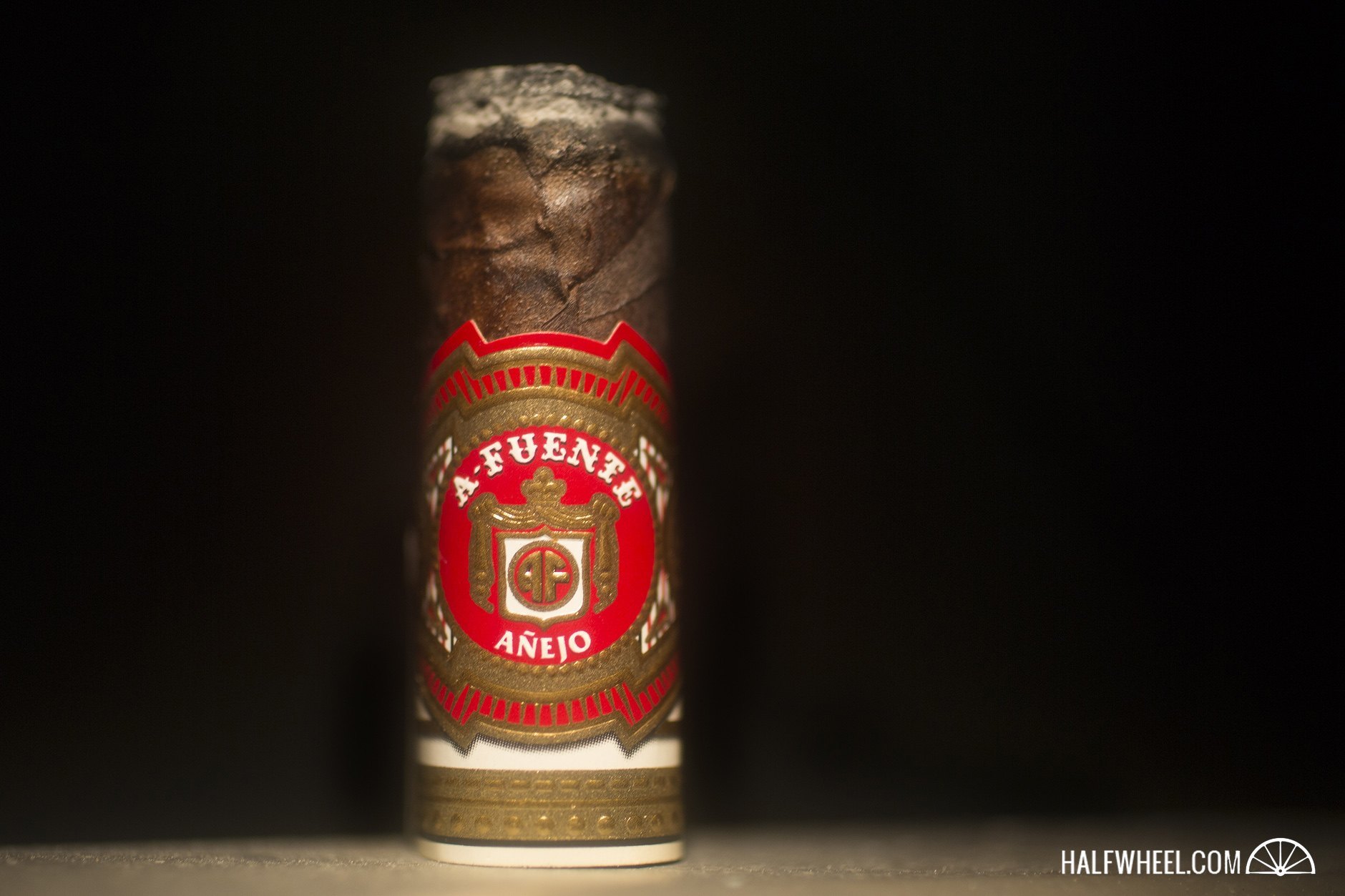 A choice between the No. 8-8-8 and the other oddly-shaped Añejo vitola—the Shark—is an easy decision, the No. 8-8-8. However, I’m still a bit torn on the cigar itself. I personally like this rendition more than any fresh Añejo I’ve had, and it’s up there with any Añejo experience I’ve had, but the profile itself is not one that I find particularly complex.  It’s a very good version of Añejo, but give me a Don Carlos, Hemingway, OpusX, Casa Fuente or a lot of other Fuentes over this any day of the week.