Earlier this year, Alec Bradley released the third incarnation in the Fine & Rare, which uses 10 different tobaccos rolled into a single. The blend, which is also known as HJ10-i, was actually the first release of the Fine & Rare in 2011, using a filler blend consisting of Nicaraguan and Honduran tobacco, along with a double Honduran and Nicaraguan binder and covered in a wrapper from Honduras. Rolled at Raíces Cubanas in Danlí, Honduras, the Alec Bradley Fine & Rare 2013 come packaged in 10-count boxes, with only 2,000 boxes released and an MSRP of $16.00 each.

The band on the Fine & Rare is one of the most interesting I have seen, and includes quite a bit of information in a not so tiny space, including:

With the release of the newsiest release, the Fine & Rare series now consists of five different releases and three different vitolas over three separate years. They are:

The boxes that the Alec Bradley Fine & Rare come in have individual slots for each cigar, and look like this: 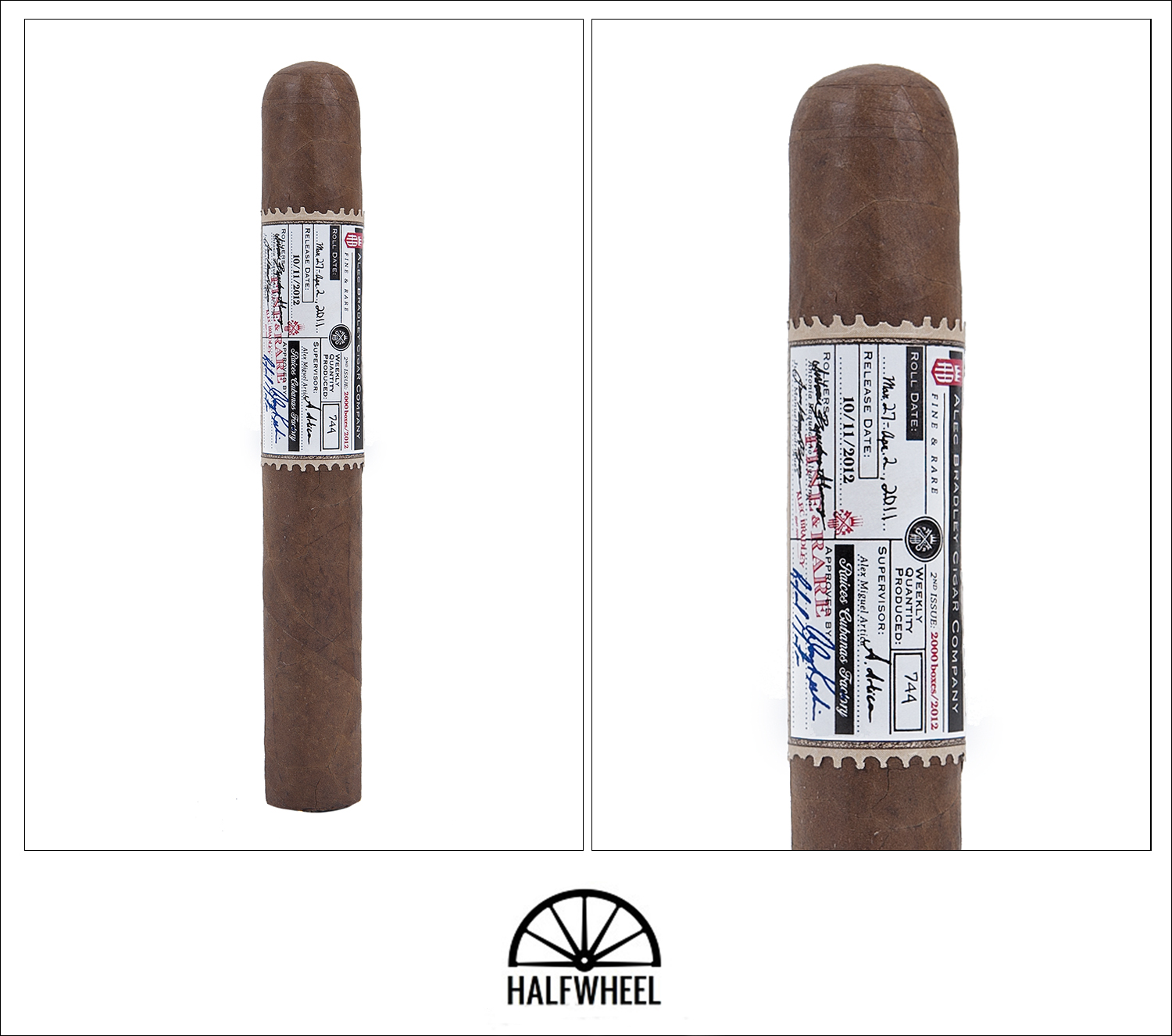 The Alec Bradley Fine & Rare 2013 is covered in a peanut brown wrapper that is almost totally smooth to the touch with no tooth at all, although a bit of oil is noticeable. The resistance is excellent when squeezed, with just a little give, and there are no soft spots noticeable. Aroma from the wrapper is a combination of faint nuts, sawdust, leather and sweet cedar.

The HJ10-i starts out equal parts sweet and creamy with a woody cedar base and a nice amount of white pepper on the retrohale. Other flavors of leather, earth, creamy nuts and coffee flit in and out, although the cedar is definitely the dominant note at this point in the smoke. There is no spice on the tongue or lips to be had, but smoke production is above average. Both the burn and draw are excellent so far, and the overall strength ends the first third just below the medium mark. The sweetness takes a major upturn in the second half of the Alec Bradley Fine & Rare 2013, and becomes quite a bit more distinct as well, reminding me strongly of caramel. Unfortunately, the other flavors that are present remain pretty much the same: creamy cedar, coffee, leather, earth and nuts. The sweetness starts out combining well with the white pepper that is still present on the retrohale, but becomes almost overwhelming at certain points near the end of the second third. Construction-wise, the burn and draw remain excellent, but the strength has not increased much at all, ending the second third at a solid medium. There is still an overwhelming syrupy carmel sweetness in the final third of the Fine & Rare, although it does start to fall off noticeably about halfway through the last third. The white pepper is still on the retrohale and I am picking up an interesting faint peppermint note every once in a while, although it sadly does not last long nor is it very strong. Other flavors in the profile still have not changed with leather, coffee, creamy cedar and slight nuts. The strength has also not appreciably changed, and gets no further than a slightly stronger medium before the end of the smoke. The Alec Bradley Fine & Rare is a conundrum for me: on one hand, it is a very well-made cigar with mostly pleasing flavors that I enjoyed smoking. On the other hand, the profile is not near as complex as you would think given the marketing of this cigar is all about the extensive use of different aged tobaccos. The balance of the profile with its almost cloying sweetness at times is another issue, and while the slight peppermint flavor that came about in the final third was interesting, it just was not strong enough nor did it stick around long enough to really impact the profile as a whole. In the end, the Fine & Rare is a good blend, but falls short overall compared to other Alec Bradley blends that cost the same or less.