While 262 Cigars owner Clint Aaron comes across as one of the more jovial and fun-loving personalities in the cigar business, the message behind his cigars have always been rooted in a very serious topic: preserving your cigar rights and fighting back against those who want to restrict or abolish your ability to enjoy a premium cigar.

After releasing the Paradigm and Ideology, as well as a limited edition line called the 262 Manifesto, Aaron unveiled his third regular line, Revere, a nod to Paul Revere, most known for midnight ride to alert Colonial troops to the pending arrival of British forces.

The Revere was first mentioned on halfwheel in April 2012, though no name or details were given at the time. It would be in June when the company would make the formal announcement of the Revere, including plans to have it on display at that year’s IPCPR Convention and Trade Show with shipping to begin in October. The press release that followed in July made mention of a store exclusive size that would join the three core lines, a 6 x 46 Lonsdale for J. Shepherd in Louisville, Kentucky. A Lancero vitola would be announced in December, giving the line a total of five vitolas.

Dubbed the “Night Rider” as a nod to Paul Revere and his famous midnight ride announcing the pending arrival of the British, the 262 Revere Lonsdale was released on May 1, 2013 with Aaron in attendance at an event held at J. Shepherd At The Range in Louisville, Ky. An interesting story in its own right, Shepherd found a 20,000–square-foot warehouse that he uses for events, which happens to be adjacent to the Training Guns & Gear shooting range.

262 Cigars’ website tells the inspiration of the Revere in this way:

Our Freedom to smoke cigars is hanging in the balance. As the FDA’s decision whether or not to heavily regulate premium cigars looms, more and more people are joining in the fight the keep the government’s hands out of our local smoke shops and humidors.

We are reminded of a time when our great nation was on the verge of birth when every person from every walk of life had the opportunity to stand up for freedom and make a difference. Paul Revere was among those who answered the call with selfless courage and made his mark on history. 262 celebrates that passion with our 3rd full release line, the Revere.

Paul was not a member of the political high class, nor was he a great military leader. Although he did serve some time in the military, Revere was an average, blue collar, working class citizen. But, it was his passion for the American Experiment and his sincere belief in freedom and liberty that drove him from obscurity to national hero.

Paul Revere saw his opportunity to play a part. He was tasked with a specific mission, and through dark of night, many altercations with the enemy, and under penalty of death, Revere and others like him played a pivotal role in America’s success in the Revolutionary War.

We christened the Revere in celebration of this passionate spirit. We also hope to inspire this spirit in others as we fight to keep the government out of our humidors. We must stand together, stand strong, and stand free.

Will you sit idly by or join the revolution?

The 262 Revere line is available in four regular production sizes, and this store exclusive Lonsdale:

You’ll notice that in addition to being a store exclusive, the 262 Revere Lonsdale is the only one to be packed in 10–count boxes, which look like this: 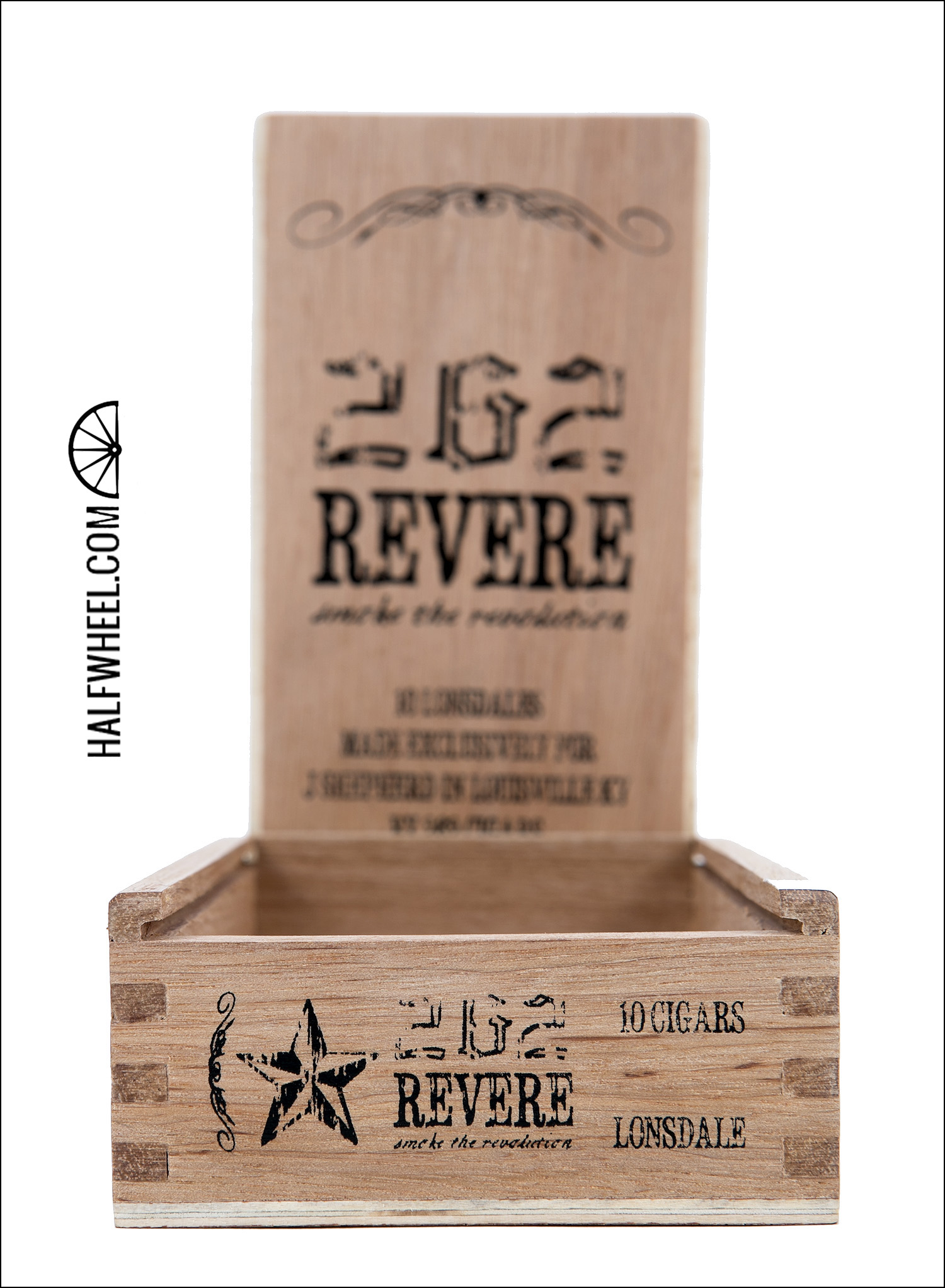 So far, 75 of the 100 boxes have been sold, and Jason Shepherd tells me the remaining 25 boxes will be put on sale on today. He and Aaron have discussed a second run, but are looking at a number of options, including what he said could be “a mix of the same blend and another of the same size, but with a wrapper I have been working on with Raices.” He said that whatever gets decided on wouldn’t likely be released until Fall 2014. The 262 Revere Lonsdale is a handsome cigar with a visually smooth rich milk chocolate wrapper that offers a surprising amount of texture for the fingers. Both veins and seam lines are noticeable though not a distraction, as the twisted cap draws your eye up towards it. There’s just the slightest bit of give throughout the cigar’s length, with a fragrant note of coffee beans and pepper coming off the foot. The cold draw is just the slightest bit firm, offering a decent bit of resistance without feeling like the air flow is impeded, with subtle notes of chocolate and soil and just the slightest bit of pepper.

It takes a few puffs to really get the 262 Revere Lonsdale into its sweet spot, but when it’s found it is quite enjoyable. A complex flavor is guided by chalk, some earth, pepper, a bit of wood and just a touch of baking spices that register more in the nose. It’s not an overpowering beginning by any sense, but just strong enough to get and keep your attention, and remarkably smooth to boot. The first inch of ash breaks off unceremoniously with the burn line straight and smoke production above adequate. It’s a few more puffs before there’s a noticeable shift in flavor, with the wood and pepper becoming a bit more pronounced as the smoke slides across the center of the tongue. At times, it’s hard not to get lulled into happy complacency by the smoothness of the 262 Revere Lonsdale’s flavors as it heads into its second third. The second clump of white and grey ash holds on even longer than the first bit did, though of course as soon as I noted it, the slight vibration from being set back in the ashtray promptly dislodged it. With the final third on the horizon, the flavors brighten up a good amount with bright wood notes in the smoke and an increasing amount of burnt wood on the palate. Without disrupting the smooth course established so far, the final third of the 262 Revere Lonsdale holds some interesting changes, largely by developing the wood note with a first step towards a charred note and then a quick change of gears to an unburnt, fuller wood note. That gets combined with a sprinkling of pepper to help the flavor stand out much more than it had previously, and the rise in flavor and strength continues to the end of the cigar, with increasing amounts of pepper and wood leading the way, supported by subtle notes of chalky sourness for even further complexity. If there's something that every cigar smoker wants to have in their humidor, it's a very good, reliable and enjoyable cigar that they can go to without worry. After smoking a pair of these, that's exactly what I found them to be. The 262 Revere Lonsdale may not be have the biggest or most complex flavors, nor does it gracefully dance in subtleties and finesse, commanding your full attention. What the 262 Revere Lonsdale does is just perform. You could likely smoke this any time of the day or night and in nearly any situation and you'd be impressed by it, which is about all anyone can ask from a go-to cigar.