On February 7, 2012, 262 Cigars (formally Revolution Cigars) released a limited edition cigar that had been announced back in 2011. Dubbed the “Manifesto”, the cigar is being produced as a call to action to protest smoking bans and governmental regulation of tobacco.

In fact, not only is the name of the company (262) a play on the date of the start of the signing of the Cuban Embargo by President John F. Kennedy (on February 7, 1962, obviously), the actual release date of the Manifesto cigar is meant to coincide with the 50 year anniversary of said embargo.

We drafted the 262 Manifesto as our call-to-action for cigar smokers and freedom lovers alike to raise their voices in opposition to the ever-constant barrage of over-regulation, excessive taxation and ever-wider smoking bans. It is the foundation for the 262 brand and belief. READ THE DOCUMENT and then decide where you stand, what you believe and what you plan to do about it. It’s time to rise up, stand strong, and stand free.

This is a statement of intent, a call to action. Those who currently sit in executive, political office seem to believe that they can regulate our every decision. But, amidst their draconian rules and shallow intentions; underneath the turmoil and anger of the once revered connoisseurs of our beloved leaf; there brews a Revolution! An uprising of global proportions is stirring and its proponents will be silent no more.

The 262 Manifesto release is limited to 262 individually numbered boxes of 10 cigars each (so 2,620 total cigars), with only 26 boxes going to each of 10 stores selected to receive the Manifesto.

The boxes look like this (photo courtesy of 262 Cigars): As of this moment, only 8 of the 10 stops on the tour have been announced. They are: The 262 Manifesto is a nicely made cigar with a dark mocha brown wrapper that is fairly smooth to the touch. There are a few veins, but they are not overly distracting and the cigar has a great amount of give when squeezed. The wrapper smells strongly of dark chocolate, cedar and barnyard.

The Manifesto starts the first third with a great amount of spice on the tongue, along with flavors of coffee, cedar and hay. There is a great sweetness that contrasts with the other flavors, and is quite noticeable and enjoyable on the palate. While the draw is fine, the burn is a bit wonky in the first third, and I had to touch it up a few times, but nothing too major in that regard. Strength at the end of the first third is a solid medium, and does not seem to be getting any stronger, but we will see. 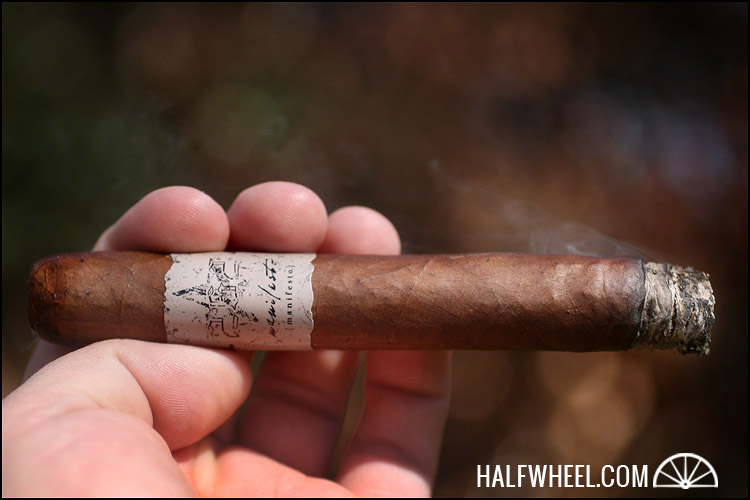 Coming into the second third and the profile of the 262 Manifesto seems to be much the same, both flavor and strength wise, and there really is not much change for pretty much the entire middle third. Main flavors of cedar, coffee and (less) hay. Construction remains fine and the strength remains medium. The final third really has nothing to add with the profile and flavors pretty much continuing to remain the same as the rest of the cigar. The coffee flavor is dominant, but not overwhelming, and the sweetness is perhaps a bit more distinct, but that is about it. The strength ends where it began, at a solid medium and the burn and draw continued to be middle of the road as well with a few touch-ups needed, but not enough to really bother me. The Manifesto does get a bit hot at the end, and I had to put it out a bit earlier than I would have liked, but it was well past the band when I finished. The Bottom Line: These cigars were produced for a great cause, and I was really hoping that the Honduran tobacco that is used in this blend would lead to an interesting profile. Alas, that was just not the case. While not a bad cigar by any means, after smoking two of them, I was really left wanting more out of the blend. It is a nice, straight forward smoke with nice, straight forward flavors, but honestly, I have enjoyed the 262 Ideology that I have smoked more, and they are not only easier to get a hold of, but also quite a bit cheaper.