A little over a year ago, Enrique Sánchez released the latest addition to his growing 1502 Cigars portfolio, the 1502 Nicaragua. Released in a single 5 x 50 robusto vitola, the cigar was a tribute not just to where it was made or that it is a Nicaraguan puro, but also Sanchez’s home country, which was “discovered” by Christopher Columbus in 1502 and thus gives the brand its name. For 2015, Sánchez decided that it was time for the 1502 Nicaragua to add a size, a 7 x 48 box-pressed Churchill. Like the rest of the 1502 line, it features a partially covered foot, a feature referred to as the cigar lock, and like the robusto, the Churchill uses a blend of tobacco from Condega, Estelí, Jalapa and Ometepe. Hand me this cigar with no band on it and I wouldn’t be inclined to call it a Churchill vitola, as the box press takes away one the size’s usual roundness and makes it feel just a bit thinner than the round version. The slightly covered foot is likely to catch most people’s attention as it is a feature you don’t see on the majority of cigars, and if you’re not familiar with the reason for it, might think it a fairly odd feature or at least one that defies a readily available explanation. The graham cracker-colored wrapper has a few veins and generally clean roll lines with a fairly well applied cap while being incredibly an soft leaf in the hand. There are a few soft spots in each cigar, and each sample shows various amounts of give from head to foot. I have a hard time finding much to note about the pre-light aroma from the first cigar, though the second has a bit of cedar and damp cardboard while the third is brighter and more effervescent with a plain cake donut base. The cold draw is pleasingly firm though it too is fairly nondescript, with a bit of generic tobacco flavor being most prominent and a faint suggestion at sweetness in the background.

Even with the partially covered foot, the 1502 Nicaragua Churchill doesn’t start with as big a blast of pepper or flavor as one might expect, offering a medium bodied introduction with just a bit of white pepper, and with a freshly brewed cup of coffee giving off its aroma when I smoked the first cigar, it’s a very pleasant combination and way to start the day. The nose is the first to pick up on the slight increase in black pepper in the first inch or so, with the palate getting introduced to it shortly thereafter. It’s not much longer before the nose is getting lit up by a mix of black and white pepper on a retrohale and the first clump of ash falls at the one-inch mark. The burn line has been even if not always sharp through the first third and the draw is darn near perfect, with smoke production decently average. The pepper and overall strength both seem to be increasing a bit, and I’m beginning to get a bit of warm nuts with just a bit of salt in the profile as well as some cedar. I’d like to say there is some sweetness beginning to emerge, but it’s not consistent enough to really say so, but the cigar certainly seems to be hinting at it. Near the start of the second third, the 1502 Nicaragua Churchill starts creeping up in both strength and body a bit more; the pepper has been fairly consistent so far but the background flavors are starting to fill out with more wood the first to step forward. Soon after though, there’s just a bit of respite from the pepper and while it hasn’t disappeared, it has allowed a bit lighter of a profile to emerge that shows touches of vanilla sweetness and creaminess. Retrohales are still plenty strong, giving the nose plenty to deal with whenever the time seems right. A back-and-forth between increases of strength through the return of pepper and the introduction of some robust earth and their backing off in favor of a somewhat milder combination of graham cracker, wood and cream continues through the better part of the second third, giving the palate ample amounts of near-challenging intensity and some mellower points to recover from it. The cigar continues to burn well, with any occasional departure from an even burn line correcting fairly quickly. 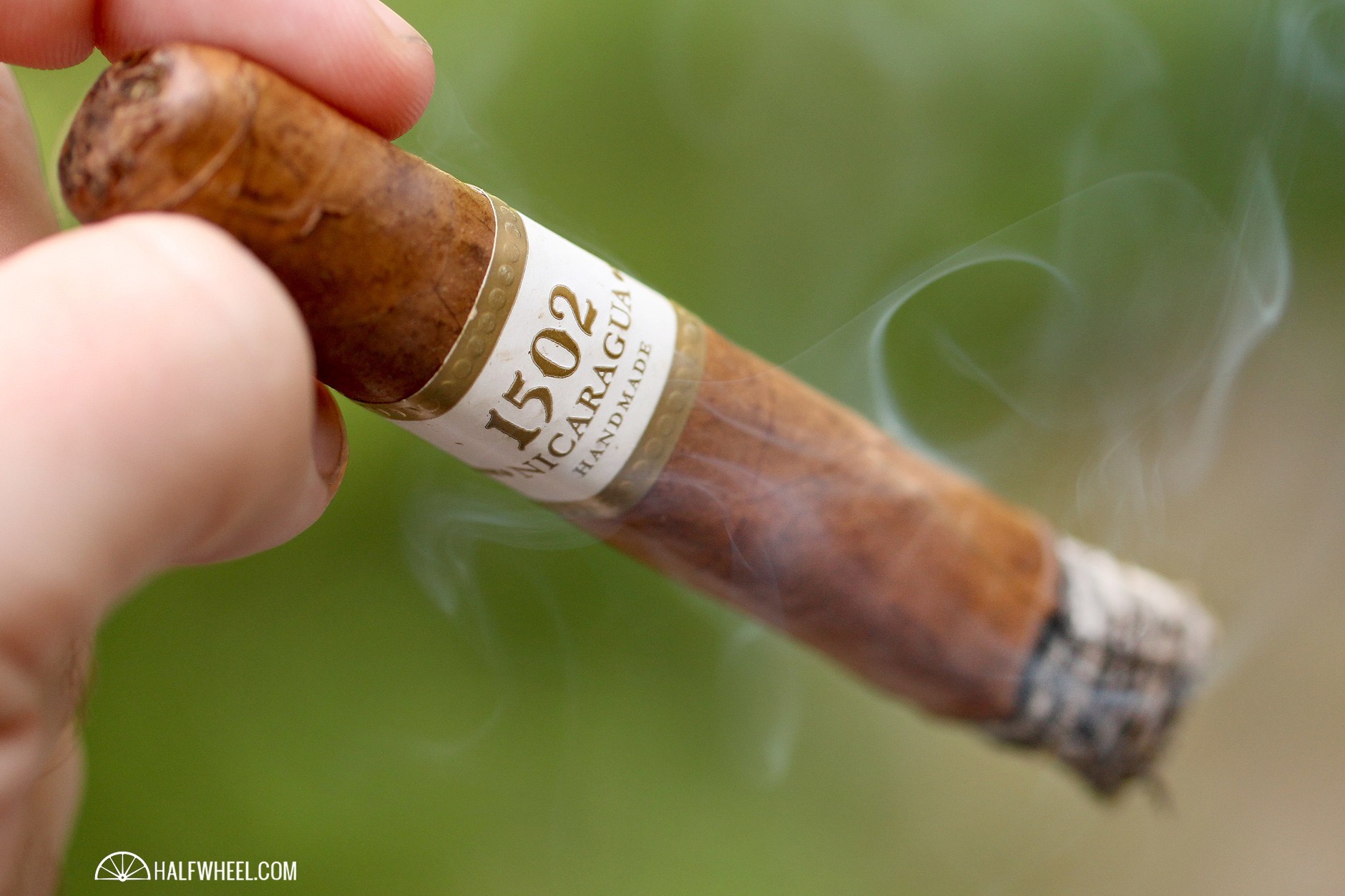 What had been a fairly consistent black pepper note in the second third has turned to red chili pepper flakes, almost on cue with what the cigar did in the original robusto vitola. I’m getting a bit of the green pepper notes here as well, though they seem much more in the background and fleeting when they do appear. The first burn issues I experience with the 1502 Nicaragua Churchill are also in the final third, as the cigar seems to have a bit more of a propensity to go out, but it’s generally a single occurrence—if at all—in any one cigar. What sweetness and creaminess the cigar showed earlier seems to have largely faded into a distant memory, though a trace does emerge every once in a while, but it largely outmatched by the pepper that brings the cigar to its conclusion. While I started out enjoying the first third of the 1502 Nicaragua Churchill, the phrase that was on my mind as I put each one down was palate fatigue. The evolving pepper is one of the main constants of the cigar, and when I finished all three I went back and looked at the notes from the robusto, and it was almost identical to my experience, with this cigar being two inches longer. I’d certainly smoke one again, especially if only having one cigar or my palate wasn’t tired out; if you’re looking for a pepper-forward cigar that stays fairly balanced despite delivering a fair amount of harshness, this would certainly be a worthwhile option.