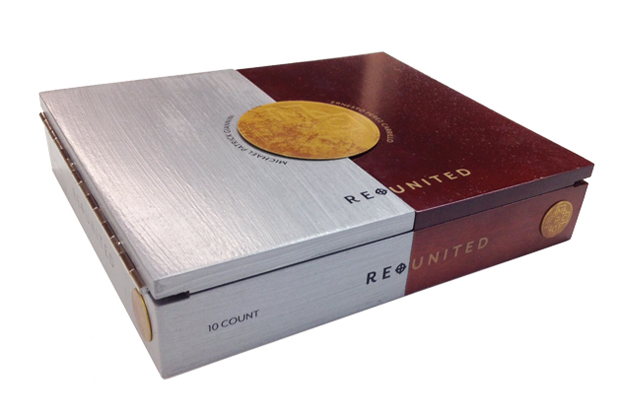 Re+United, the collaborative project between Michael Giannini of Foundry Tobacco Co./General Cigar Co. and Ernesto Perez-Carrillo, Jr. of E.P. Carrillo, has begun arriving in stores this week as several retailers have announced that they are now for sale.

Announced in February, the project was initially scheduled to be in stores in March, but was pushed back to an arrival date of late April or early May after minor production issues with the boxes, which brings together wood and metal in a half-and-half design that is a nod to the two collaborators and their unique styles. At the center of the box and on the bands is a cross logo that features the two men’s initials, MPG for Michael Patrick Giannini and EPC for Ernesto Perez-Carrillo, with the shared P as the center point for the design.

The Re+United project comes in a single 6 1/2 x 54 vitola that uses a high priming Ecuadoran Connecticut wrapper coming from General Cigar’s warehouse that was grown by Oliva Tobacco Co. Perez-Carrillo supplied the Connecticut Broadleaf, while the filler comes from both companies: Dominican Piloto Cubano from General and Nicaraguan tobacco from Perez-Carrillo.

The project has garnered attention due to its makers’ connection to the La Gloria Cubana brand, which Perez-Carrillo owned before selling to General Cigar Co. and Giannini’s work with the brand both before and after the transfer of ownership, including being the brand manager for La Gloria Cubana and helping to reinvigorate the brand in recent years.