The Tobacco Vapor Electronic Cigarette Association (TVECA) claims that it has gotten its hand on the proposed final ruling of the deeming regulations from the U.S. Food & Drug Administration (FDA), and in it, there doesn’t appear to be great news for the cigar industry.

we now possess critical documents concerning the future of the industry in the US. We will headline this information tomorrow on all outlets

While the organization says it will leak the document in full later today, the leaked table of contents appears to indicate that FDA has chosen Option 1 in regards to regulating premium cigars, meaning it did not choose an exemption for premium cigars.

On page three of the leaked table of contents, a chapter titled “Regulation of Cigars and Selection of Option 1” appears to show the agency’s decision. Furthermore, it goes onto indicate FDA believes that “Youth and Young Adults Use Premium Cigars.” 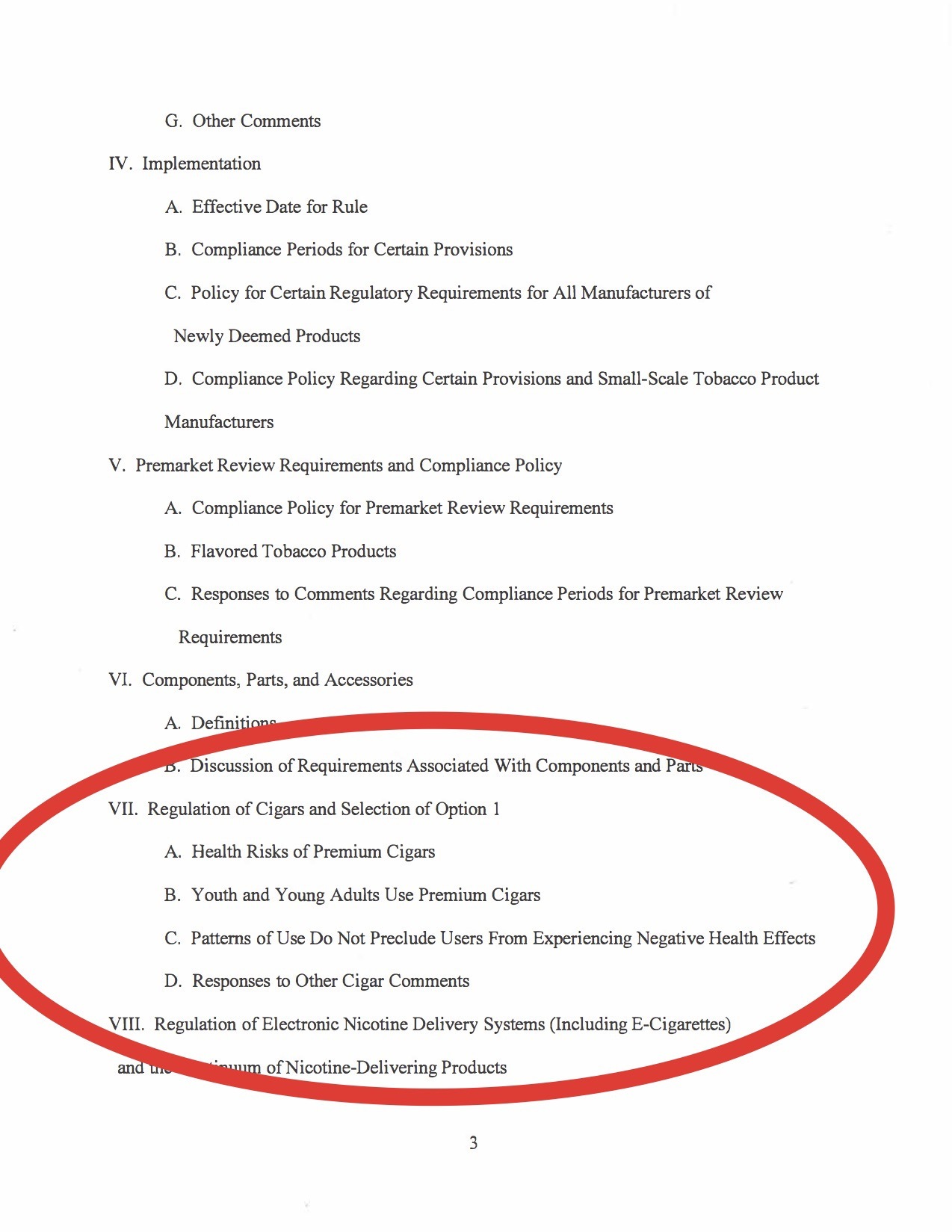 The news is not great, but it’s not the doomsday scenario.

This document is only FDA’s proposal to the White House Office of Management and Budget (OMB), which took place sometime in the last few weeks. OMB is now reviewing the proposal and can make changes before the new rules are entered in the federal register and become law.

Under Option 1, cigars will be subject to approval, likely in the form of substantial equivalence. This process is expected to be costly both financially and time-wise. It would require any cigar not marketed prior to Feb. 16, 2007 to go through approval process and any cigar introduced after the regulations take effect would be unable to enter the market until approval.

Option 2 could have changed most of that. It would establish a definition of “premium cigar” and products that met the requirements would be exempt from FDA control.

Cigars being marketed prior to Feb. 15, 2007 would be grandfathered in, subject only to new warning labels, ingredient disclosure and a ban on free samples.

The good news for cigar smokers is FDA’s decision was neither entirely unexpected, nor final.

It was OMB and not FDA that proposed the exemption for cigars in the first place and OMB has been far more receptive to the cigar industry’s request than FDA. Despite FDA’s decision, OMB could ultimately overrule the agency and exempt cigars altogether.

That decision might take some time, OMB has a non-binding 90-day review window, but needed six months to deal with the deeming regulations when they were submitted as a draft in 2013.

For more information about the proposed regulation of premium cigars, visit halfwheel.com/fda.

Update (Nov. 4, 2015) — On Oct. 31, FDA released a statement indicating it was aware of the alleged leak, but would not confirm or deny the legitimacy of the document possessed by TVECA. In the statement, FDA said that it submitted the final draft of the rule to OMB on Oct. 19.

Most importantly, FDA indicated that it had spoken directly to TVECA and reached an understanding that TVECA would not be leaking the document.

The fact the FDA is issuing a statement gives at least some legitimacy to the initial claims by TVECA as it seems likely the agency would simply ignore or deny the validity of any document that was not authentic.

FDA’s full statement is as follows:

The FDA has not yet issued its final rule and other documents related to extending the agency’s authority to other currently unregulated tobacco products. We are aware that the Tobacco Vapor Electronic Cigarette Association (TVECA) has indicated publicly that it has a copy of the draft final rule. We cannot confirm if TVECA has a copy of the most recent version of the draft final rule, or even if their copy is authentic. It is our understanding based on recent conversations between the FDA and TVECA, that the group will not be releasing the document in question.

As a matter of policy, the FDA does not share draft documents or negotiate with outside groups while they are under review. The FDA is committed to maintaining the integrity of the regulatory process. It is important to note that the rule is still in draft form and was submitted to the Office of Management and Budget (OMB) on Oct. 19, 2015. OMB is required to review all significant regulatory actions.

The FDA remains committed to an open dialogue with all interested parties, including industry, consumers and the public health community – and looks forward to the completion of this important rulemaking.