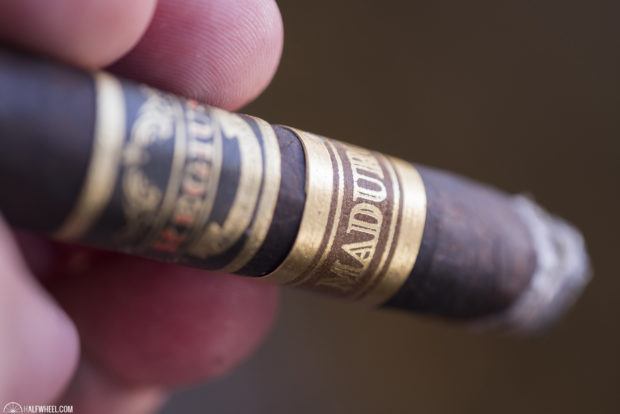 Although Regius Cigars as brand that could only be found in the U.K. for years, that changed in late 2011 when the brand officially launched in the U.S.A., where one of the first retailers to carry it was the now-defunct retailer Sacred Cigars in Dallas.

The brand sells a number of lines, but few of them incorporate a maduro wrapper, which is why the subject of today’s review is notable. While very little is known about the blend, the appropriately named Regius Maduro “combines the complexity of the popular Regius Black Label, with an updated blend designed to accent a rich maduro wrapper.”

“It came to me when I was eating jamon in Spain,” said Akhil Kapacee, ceo of Regius Cigars, in a press release. “The pigs that create the best ham are fed only acorns for the last 40 days of its life, resulting in a luscious and smooth flavor that cannot be replicated by conventional means. Why not apply that same principle to the growing of tobacco? We realized very quickly that this fertilizer was the missing piece to the highest quality wrapper leaf.”

The new Regius Maduro was released in five different vitolas, all which are packaged in 25-count boxes:

This portion of the review was edited to include a quote from Kapacee. Visually, the Regius Maduro Corona is covered in a rich brown wrapper that is fairly smooth to the touch and lacks any oil as well as any veins. There is the slightest hint of a box-press noticeable and it is very firm when squeezed, firmer than I would have expected in the small size. Aroma from the wrapper is strong dark chocolate, oak, espresso beans, leather and earth with cold draw is full of cedar, earth, leather, cocoa nibs, baker’s spices and strong black pepper.

Starting off, the Regius Maduro features a dominant combination of both dank earth and dark chocolate, interspersed with flavors of hay, barnyard, leather, roasted espresso beans and charred oak. The vanilla sweetness from the cold draw is present on the retrohale—albeit not nearly as distinct—and there is also a significant amount of black pepper to contend with. Construction-wise, the draw is fine after a v-cut while the burn gives me issues right out of the gate, forcing me to correct it before it gets out of hand. The overall strength begins quite mild, but does begin picking up by the time the first third finishes, ending up closer to the medium mark than the mild mark. 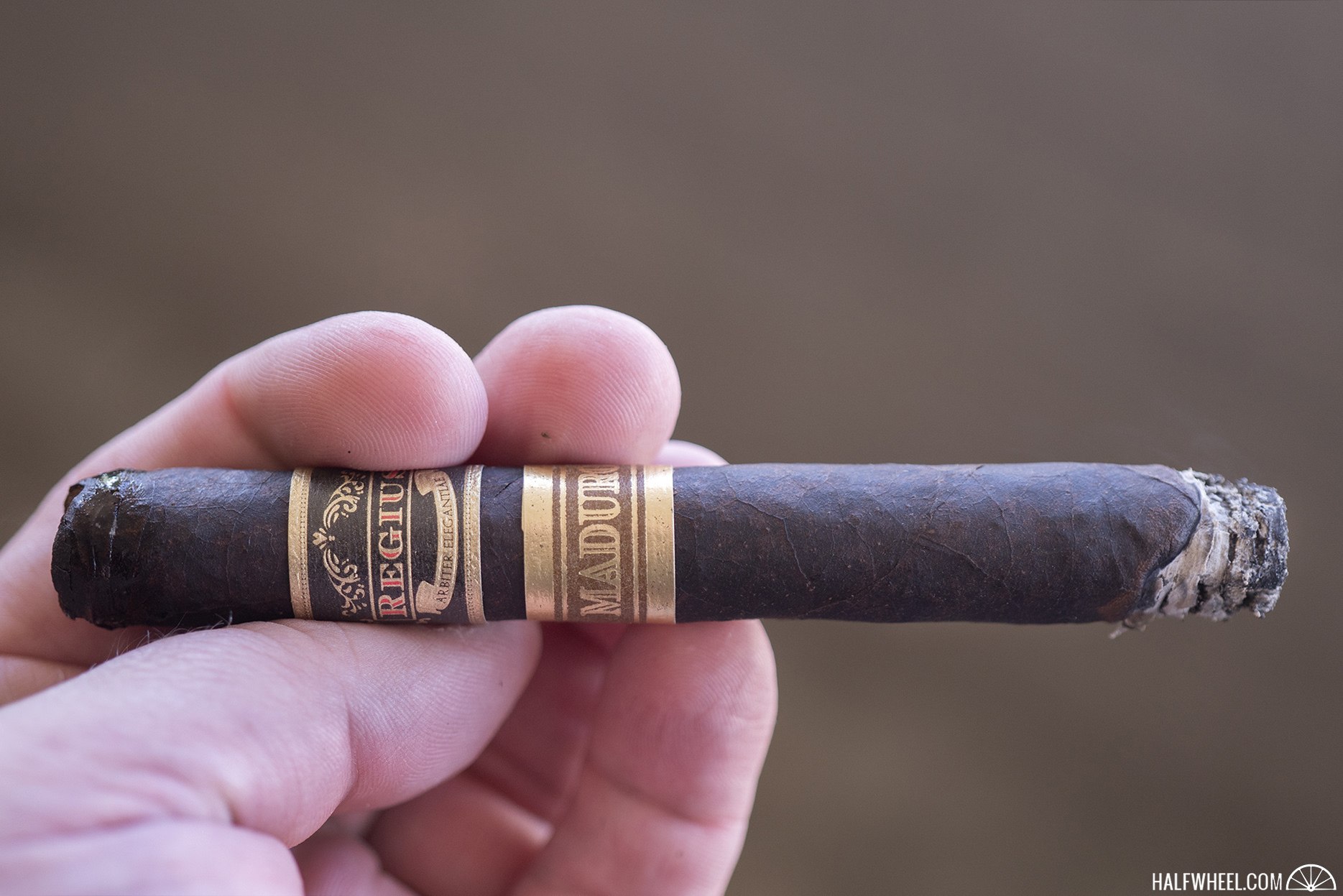 While the vanilla sweetness from the first third becomes a little more obvious in the second third of the Regius Maduro Corona, the dominant flavors remain a combination of earth and dark chocolate. In addition, there are notes of espresso beans, hay, yeast, leather, oak and slight cinnamon that flit in and out along with black pepper on the retrohale that has receded somewhat. The draw continues to impress and the burn has evened up nicely, while the smoke production is about average coming off of the foot. Strength-wise, the Regius has increased a bit, but still fails to hit medium by the time the second third ends. The final third of the Regius Maduro Corona seems to be a continuation of the second third for the most part, with the same dark chocolate and earth combination easily strong enough to remain the dominant flavor, followed by leather, grass, coffee, peanuts, cinnamon and a slight floral flavor. The only major change in the profile is the vanilla sweetness, which has become strong enough to really impact the overall profile in a major way, leading to a much more enjoyable experience. The construction remains fine through the end of the cigar, and although strength does increase in the final third, it is still not enough to reach a solid medium by the time I put the nub down with less than an inch left. There are plenty of blends that are extremely enjoyable despite the fact that they are not overly complex; unfortunately, the Regius Maduro is more the latter than the former. The profile is full of dominant earth and leather notes with plenty of black pepper and while there is some slight vanilla sweetness—especially in the second half, which is easily the best part of the cigar—there is never enough to overcome the aforementioned flavors. Construction was fine and the strength was non-problematic, but in the end, the Regius Maduro Corona does little to differentiate itself from the sea of maduro-wrapped blends that are already on the market.