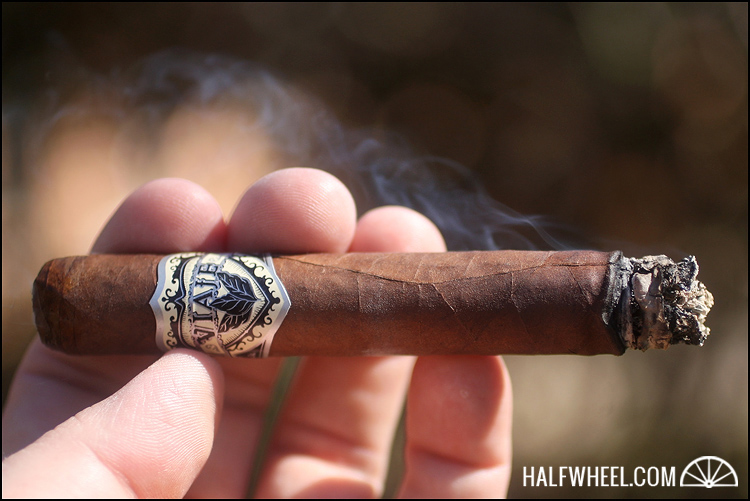 Of all of the blends and releases that Viaje has produced, the Exclusivo line is not only one of the most liked, but is also one of the populous. Although supposedly made for the personal consumption of Viaje owner Andre Farkas, there are now more than ten releases in the line, with more confirmed to be on the way in 2013. The Corona Gorda—like all the Exclusivo line—is a Nicaraguan puro, unlike the rest however it is oftentimes sold at the rare Viaje event, usually in bundles.

This was a very good cigar. have long been a fan of the Exclusivo blend and this cigar suited my tastes perfectly. The wonderful construction and draw only added to the experience Now, the only question you may have is, is it better than the original Exclusivo Robusto?The answer is yes. The Corona Gorda is better than the Robusto, but not by much.

The Viaje Exclusivo Corona Gorda is an excellent looking specimen with a gorgeous mocha brown wrapper that is almost totally smooth to the touch. It has some nice give when squeezed and the pigtail cap is a nice touch. Aroma coming off of the wrapper is a combination of raisins, barnyard, dark chocolate and slight pepper.

The Exclusivo Corona Gorda starts off with an extremely aggressive black pepper note on the retrohale, along with flavors of leather, chocolate, coffee, sweet raisins and wood. There is a great creaminess to the profile that combines well with the ever-present black pepper and every once in a while I get something like a bitter peppermint note, but it only lasts for a puff or two before disappearing again.

While the second half sees a decrease in the black pepper, it never totally disappears. In addition, the Viaje sees an increase in a flavor that I can only describe as “charred meat,” not a bad note at all—but quite interesting—and not something I taste in many cigars. It is also different than the meaty note I tasted the first time around. The sweetness also increases in the second half, although it is still not a major player in the profile. Other flavors of espresso, cinnamon, leather and cedar flit in and out until the end of the smoke.

The draw is excellent and although I have to touch up the burn a bit, it not enough to really annoy me. Smoke production is well above average, but the ash is quite flaky, more than I remember from the first time I reviewed it. Overall strength has also decreased from the first review and ends up being well short of full, somewhere in-between the full and medium marks.

I had expected this Exclusivo Corona Gorda's profile to change with age, but even I was surprised at the path it took. The black pepper on the retrohale that was present for the first third was almost overwhelming, and something that was just not present when I first smoked these almost two years ago. Even with that note, the other flavors in the cigar are fairly complex, extremely well balanced, and the draw was great for the entire smoke. Is it a better cigar after being aged for two years? I would say no, but it changed considerably and has still retained its complexity and that says quite a bit about the blend. Definitely a cigar you should pick up if you ever have the chance.