Our redux reviews take on two different forms. Most of the time, we take a look back at a cigar that we previously reviewed with other cigars that we purchased for the original review. This means the cigars have rested for an addition six months, although in most cases, it’s for a much longer period of times. In the other category, not usually seen, we compare cigars that we previously reviewed with newer versions of the same cigar, exactly what today is about.

I first reviewed the Undercrown Flying Pig in the summer of 2012. Back then, it was an extremely limited cigar and not available in the U.S. with all 205 boxes of 12 being sent to Holland. The blend was said to be slightly modified, a tweak I enjoyed quite a bit:

Because it’s what everyone is wondering, let’s get it out of the way. Better than the No. 9 Pig? Nope. Better than the T52 Pig? I liked it more. Better than Feral Flying Pig? Two different cigars—push. Better than Corona ¡Viva!? No. Better than a regular Undercrown? Yes. Perhaps most interesting—better than I expected. Despite the youth, the vitola was earthier and more detailed than most of the other Undercrowns I recalled smoking and unlike the No. 9 or T52 renditions, I wasn’t frustrated that the flavor of the vitola had to be ruined by the shape itself. There is no doubt that a month in the humidor, where the cigars can dry out a bit more and the flavors can settle a bit more, will improve the Undercrown Flying Pig. But most importantly, unlike the No. 9 or T52 versions, I’m going to have to stop myself from reaching for these versus a regular Undercrown, something that just doesn’t happen now. Is it worth the hoops and stress you are inevitably going to have to go through in order to pay $20+ for one? Probably not. But, if you get a chance to get some without the hoops, shipping costs and language barriers, like say in the comments below, I wouldn’t waste the opportunity.

Since then, Undercrown Flying Pigs have made various appearances, largely at Cigar Safari or charitable events where executives from the company are present. They have been rare, albeit not impossible to find, but not for sale.

The obvious question is: do they still taste as good as I remember?

I can’t tell the difference between the 2012 and 2014 versions of the cigar, at least not in appearance. The dark Mexican San Andrés wrapper retains some of the purplish hue of the original and is consistent with line. I pick up sweet oaks, some cedar and touches of chocolate and earth from the well-rolled perfectos. The foot has some cocoa, oak and barbecue notes, while I get a sweeter cocoa, leather and barnyard from the cold draw of the Flying Pig.

I didn’t really think of the draw when I took my cold draws, because it was fine, but as soon as the cigar is lit, things tighten up a ton. Fortunately, the Undercrown Flying Pig works out its differences pretty quickly, but it’s a bit of a surprise regardless. Flavor-wise, the cigar start very woodsy before transitioning into an earthy finish. It’s smooth and without any signs of sweetness and pepper. As things get going walnuts take over the mix of oaks and cedar and a bite slowly begins to build on the tongue. Midway through, a butterscotch sweetness adds itself to the mix, which is a long-awaited change for the Undercrown. Pepper comes and goes, restricted to the edges of my tongue and completely absent through the retrohale. One really odd change that occurs in the final third is a Nilla wafer like finish, once again welcome, as it helps the depth quite a bit. 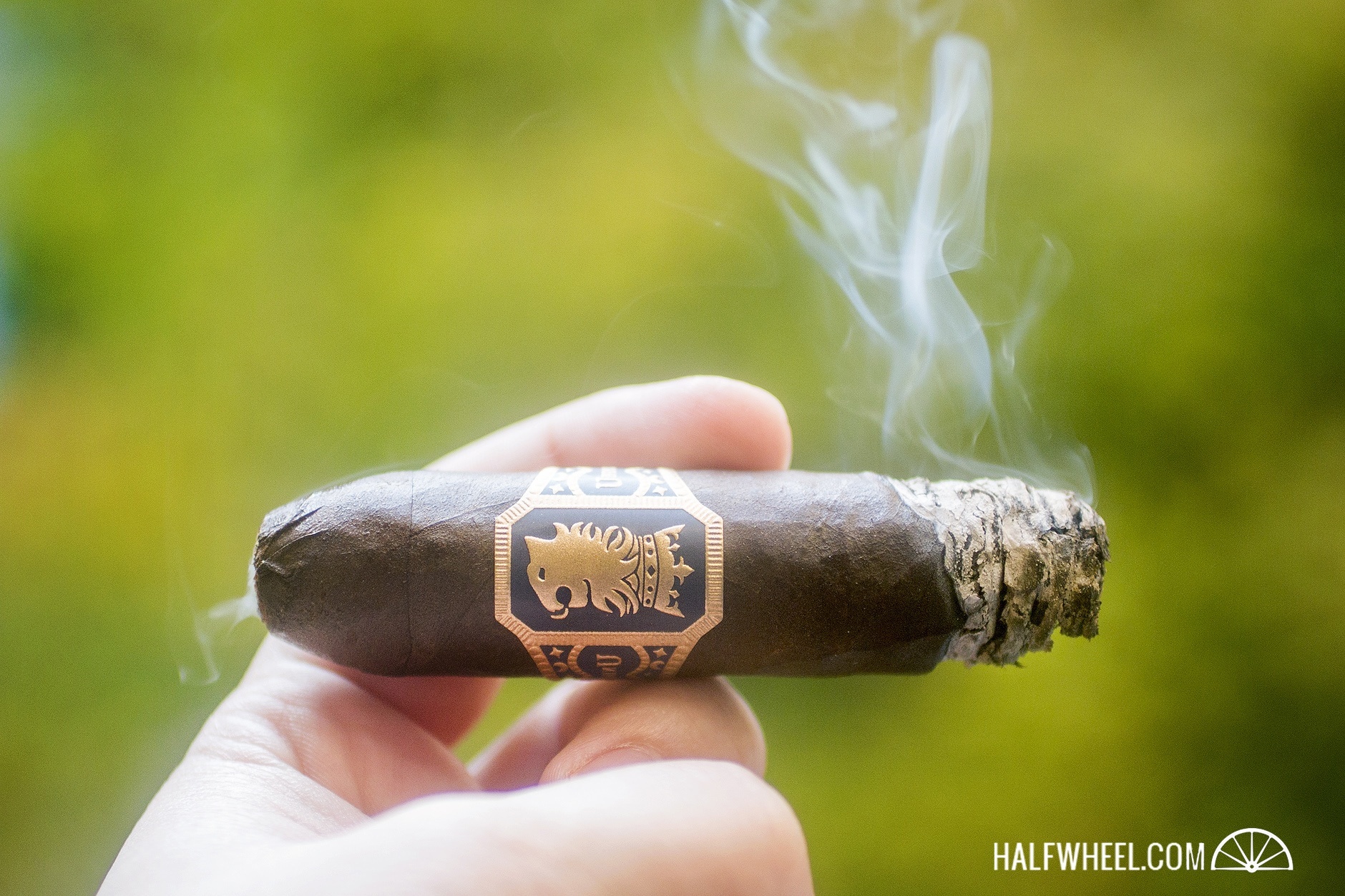 While the Flying Pig definitely bumps up the flavor midway through, going from medium-full to full, the rest of the cigar is fairly consistent. Strength starts and ends medium-full, maybe on the lighter side of that strength level. Construction is great with firm chunks of ash holding for over an inch. I avoided trying to do the ashstand I went for in my original review, something I doubt would have been achieved, although halfway through the cigar seems plausible. After the first 10 minutes the draw opened up, right below the midway point of loose and tight, providing the signature plethora of smoke I’ve come to expect from Undercrown. It’s enough smoke that I’m reminded we probably shouldn’t ever refer to a cigar as having as much smoke.

Drew Estate has advertised on halfwheel in 2014.

I smoke enough (different) cigars that it’s challenging to remember most of them for their distinct flavors. Fortunately, I have a great online journal in the form of halfwheel. I had to look back over my notes from 2012 just to make sure, but things are obviously not how I remember them. The newer Undercrown Flying Pig certainly passes for an Undercrown, but it definitely was missing much of the sweetness I’m accustomed to finding in the line. I think it’s a solid cigar, but hardly my favorite rendition.