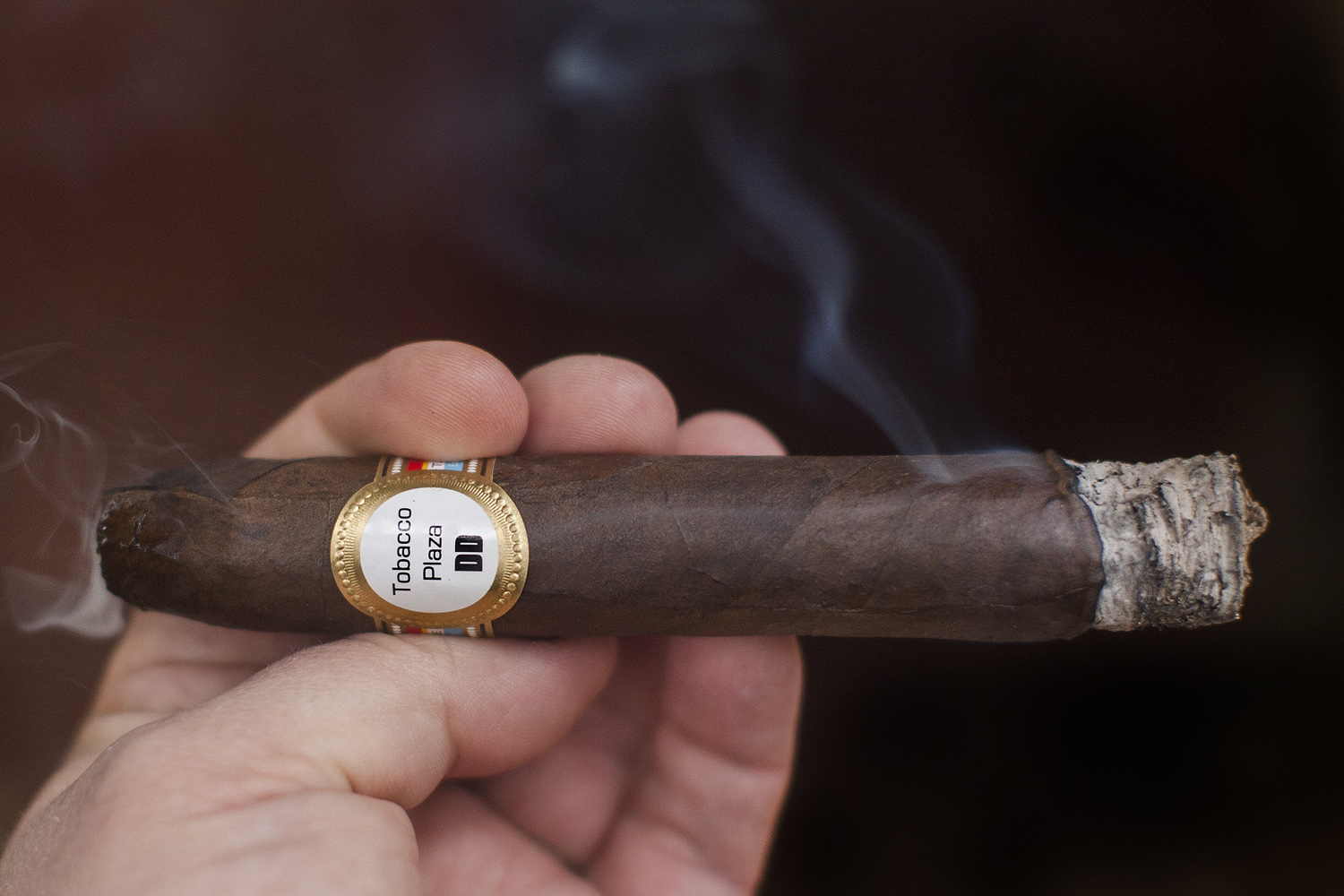 On March 13, 2012, Tobacco Plaza of Great Neck, NY released the first 5,000 of a new super-sized Tatuaje Belicoso based on the Fausto blend called the Tobacco Plaza DD. The new blend was produced to commemorate both the 40th anniversary of the Tobacco Plaza store, as well as one of the owners, Danny Ditkowich, who goes by the nickname Double D.

Here is what I said in my original review 19 months ago:

This is the strongest cigars I have smoked this year and easily one of the strongest Tatuajes that has been released. Stronger than the Fausto it is based on and on par with a fresh T110. I enjoyed the smoke, but had to take a break about two thirds into it or I would have thrown up. People who are looking for a nicotine fix are going to love this cigar and people who are not used to cigars this strong are going to puke. Honestly, the best part of this cigar for me was the first third, where the flavors were intense and the strength was about a full-like medium. After that, the strength took over and really fucked me up. Having said all of that, the flavors were classic Tatuaje with a small twist and the profile was surprisingly balanced, despite the strength. I am buying a couple of boxes to put down, but I think I will let them sit for a while as opposed to smoking them fresh.

A wonderful dark espresso bean brown wrapper that is covered in veins and slightly slick with oil covers the Tatuaje Tobacco Plaza DD, ending in a covered foot. Resistance is ideal when squeezed, with just enough give, but there is not much tooth to the wrapper when felt, somewhat of a surprise considering it is Connecticut broadleaf. The aroma emanating from the wrapper is a combination of equal parts strong barnyard, earth, leather and sweet oak with a little pepper thrown in.

Starting out, the Tatuaje Tobacco Plaza DD has distinct notes of gritty earth, leather, black licorice, hay and leather. There is a wonderful combination of black pepper and dark fruity sweetness on the retrohale, reminding me quite a bit of plums, and both notes only get stronger as the cigar progresses to the halfway point. Other flavors of creamy oak and a slight nuttiness develop in the second half, while the earthiness in the profile is reduced to almost nothing by the end of the cigar. The black pepper on the retrohale recedes a bit in the second half as well, but the plum like sweetness only gets stronger until it is easily one of the dominant notes in the final third. Construction-wise, the Tatuaje Tobacco Plaza DD had an excellent draw, and while the burn was not razor sharp, it was never bad enough to give me any issues. The overall smoke production was lower than I remember from the first review and lower than I expected for a cigar of this size as well. The strength was still quite evident, but not even close to as overwhelming as it was when it was fresh, and while it knocked on the door of being in the full range, it never actually crossed the threshold, remaining as a strong medium.

I kept a few of the original DD from my box I purchased specifically to do a redux on, and while I expected to get to it before now, I am glad I waited 18 months.  The strength in the blend is still present, but it is not even close to as overwhelming when fresh, and as a result I could taste quite a bit more complexity and distinctness in the profile, especially in the dark plum sweetness hay and creamy oak notes. I am usually not a fan of how Connecticut broadleaf ages, nor am I usually a fan of larger ring gauges, but there are exceptions to every rule and the Tatuaje Tobacco Plaza DD is the exception to both.