As has been documented fairly extensively, the Tatuaje Face trio draws their inspiration from the Texas Chainsaw Massacre movies, specifically the villain, Leatherface. As a child, Jed Sawyer wore a leather mask to hide his facial deformities and tumors, turning that into a mask made from human skin when he became an adult and picked up on the cannibal ways of his family, who used sledgehammers and chainsaws to kill visitors to the rural Texas area they called home and turn them into their next meal.

Johnson took that premise to create a cigar with a band made from tobacco; a somewhat jagged piece Ecuadorian Connecticut over the Mexican San Andrés wrapper. He then wrapped the original The Face in brown paper with a burlap band in place of a ribbon and packaged them in a jagged and blood-splattered wood box. While the Little Monsters and Pudgy Monsters versions didn’t get the full packaging treatment, they retained the signature tobacco band.

Here’s what I said about the Tatuaje Face when I reviewed it in August 2014:

I’d forgotten how good the Tatuaje Face blend can be, combining a strong and somewhat unique showing of Mexican San Andrés with backing notes of pepper and sweetness that alternates between chocolate and peanut butter to create some complex flavors that hit my palate in nearly all the right places. The big ring gauge leaves a bit lacking for me, and I certainly don’t think it’s better than the Baby Face’s smaller ring gauge, both in terms of what that cigar offered in flavor as well as mouth feel. But that aside, the Face is a remarkably enjoyable cigar in a bit shorter and much more readily available format than than original.

There aren’t a lot of cigars that look the Tatuaje Face, between its short and girthy stature, the strip of tobacco used for the band that reminds me of a razor blade, the unfinished foot and the pointy head that isn’t a figurado by any means yet isn’t a traditional parejo head. It’s a rustic looking cigar with a dry, toothy texture on the fingers and just a few small veins. The foot on this particular sample is only about one-third covered, giving my plenty of opportunity to pick up the sweet, fruity aroma that the filler has to offer; it’s complex, thick and jam-like, making it hard to pull out any specific notes though orange and grape fight to the forefront. While the Face is a firm cigar, the cold draw doesn’t come across as tight; it’s on the firm side though nothing is being overly restrictive as it delivers a bit of light earth and wood with soe sweetness and leather tagging along in the background.

I’m a bit surprised that the Tatuaje Face doesn’t begin with more of a bang given its covered foot, but it’s not long before the earthy notes I remember this cigar as having. It’s not quite as sweet, and if anything seems to have become just a bit drier, but it is familiar all the same. It’s not too long before the sweetness starts to emerge, though it tastes more separated from the earth notes, almost pushing them to the side for a bit instead of going for harmony. That being said, it’s a quick encounter however as the earth notes don’t seem thrilled to be displaced and quickly return to the center of the flavor stage as the burn line approaches the one inch mark and continues to reveal a very light gray ash. While there is plenty of pepper on the retrohales, I’m surprised not to find much on the palate; the nose gets a quick and sharp hit of predominantly black pepper, pointed and aggressive as it works through the nose, and it does help to wake up the palate a bit as well. By the end of the first inch, the smoke has thickened up and is almost pouring out of the cigar, and when the first clump of ash breaks off I begin to get a much more complex and complete flavor and aroma, as there’s now a bit more pepper for the tongue with a bit of leather coming in as well. While the cigar up to this point has been fairly flavorful and balanced, it now feels even more so as things open up and come together seamlessly ahead of the midpoint. 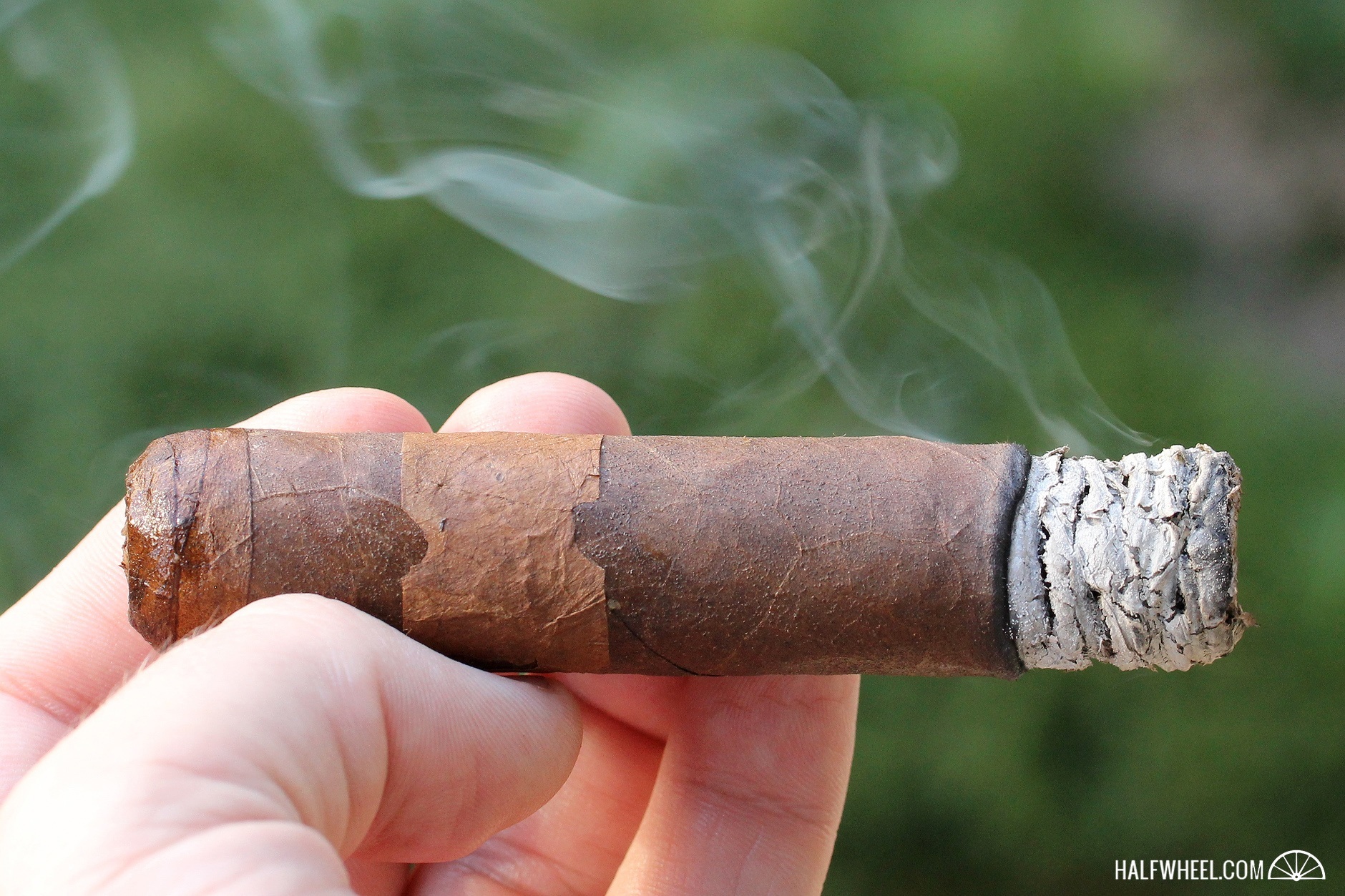 While not dominant as far as strength, the earthiness remains the leading flavor component; it’s on the dry side and lighter than a good number of San Andrés cigars might have gotten you to expect. The draw seems to have tightened up just a bit, and between that, the big ring gauge and the short length, the Tatuaje Face feels much more in my face than it did previously. I’m getting a bit more chalk in the aroma, an addition that reshapes the earthy core, and the pepper  seems game to try and keep up in the nose as it returns from a bit of a break. With the burn line approaching the band, the flavor becomes a bit grittier and rougher, showing a rocky side that it hasn’t yet exhibited. I’m still trying to find some sweetness in the blend to balance it out, and that focus latches me onto a faint cocoa powder note that stands out when the cigar isn’t being puffed on, the last remnant of the lingering flavor on the tongue. Not too long after, the same brown sugar note I found in the original review comes along, adding just a touch more balance and offering a flavor of which I am particularly fond. As the burn line makes its way through the band, there is just a slight twinge of bitterness that comes along, and while it’s fleeting, the heat once again begins to turn the cigar a bit charred and harsh, making the earth note a bit drier and sharper and leading me to call it a wrap.

While I would still gravitate towards the Baby Face because of its smaller ring gauge, the Tatuaje Face is still as solid of a cigar as it was when I first smoked it. Other than a bit of a reduction in the sweetness, time has treated the cigar well, mellowing it ever so slightly while leaving almost all the core notes intact. Besides a smaller ring gauge, the only thing I could ask for from the Tatuaje Face at this point is for those final puffs to be a bit smoother, as I’d love to get a few more out of this otherwise very enjoyable cigar.