At the 2012 IPCPR trade show, Tatuaje introduced the newest version of its box-pressed Perfecto version of Fausto, Avion 12. It was the second year of the limited production cigar, which debuted the year prior alongside the Fausto. Both blends are based off of the non-commercial Tatuaje Thermonuclear, a cigar Pete Johnson created privately in 2005 and never formally released, and the Tatuaje T110, a modified Thermonuclear Johnson released in two batches for R. Field Wine Co. of Honolulu, HI in 2009.

There will be different version of the Avion in 2013 and then all three vitolas will remain in semi-regular production after that.

Here is what I said in my original review back in May of 2012:

I was a fan of the Avion 11, but the one thing I did not like was the larger size, as it seemed to just accentuate the strength that is present in the blend, sometimes to almost overwhelming levels new vitola fixes that problem nicely. Having smoked two of these new Avion 12, I honestly prefer it to not only the Avion ’11, but also to any of the Fausto releases, as I think that even though the ring gauge is the same as the Avion 11, the smaller size, the box-press and the different vitola seems to enhance the sweetness and brings out the complexity that is present in the blend. Construction, burn and draw are wonderful, as is smoke production, and like the Avion 11, the Avion 12 is an easy box purchase for me when they are released.

Appearance-wise, the Tatuaje Avion 12 is gorgeous, a very interesting vitola, a dark mocha brown wrapper almost totally seamless, but with a bit of tooth to it. It has a wonderful give when squeezed and is slightly box-pressed. The aroma coming from the wrapper is a strong barnyard, cedar, pepper and chocolate.

Flavor-wise, the Tatuaje Avion 12 starts out right off the bat with leather, dark chocolate, earth, coffee and slight cinnamon. There is both a maple sweetness and a great creaminess that comes and goes underneath the other notes, and they are both sometimes quite strong. The profile seems to get more creamy and less sweet as the cigar burns down and the black pepper on the retrohale stays at a fairly constant level until I put down the nub. The earth note gets stronger as the cigar progresses as well and is strongest right at the end of the cigar. Overall strength starts out in the medium range and ends just slightly below the full mark. 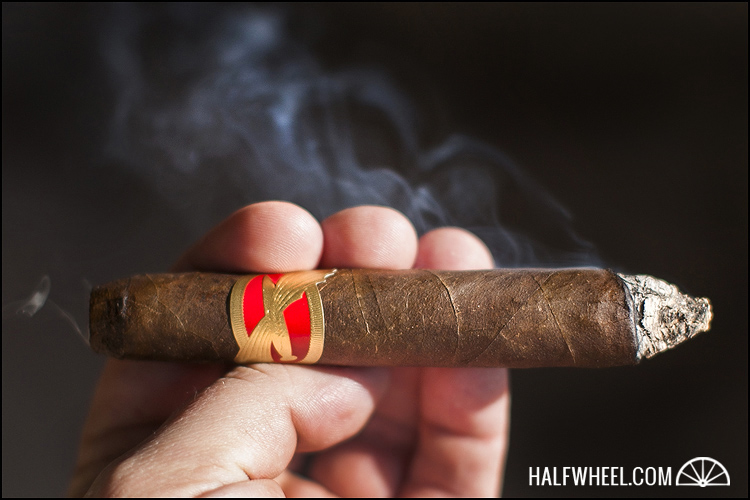 Construction-wise, both the burn and draw are excellent for the entirety of the cigar, even before the bulb of the Perfecto and I never had to relight during the whole smoke. The ash is solid and stays on for about an inch at a time. Smoke production is well above average, and the smoke is quite dense.

I loved the Avion 12 when I smoked a prerelease and I love it now. I still think it is the most flavorful and best balanced cigar out of all of the Fausto line and the vitola really suits the blend well. The construction is excellent for the whole smoke and the ever present black pepper on the retrohale really helps to enhance the other flavors in the profile. Having said all of that, the blend does not have quite as much sweetness or strength as it did when I first reviewed it, but other then that, it is essentially the same. With all of the cigars that Tatuaje released in 2012, the Avion 12 seems to get lost in the shuffle, and honestly, that is a shame.