Last year SAG Imports released the Q d’etat line to bring attention to the increased government regulation and taxation of cigars. The line consisted of three cigars, released in February, May and September of last year. While the first two releases were both Dominican puros, the company changed the blend for the final release because they weren’t happy with how the blend worked in that size.

The three cigars in the line are:

Today we’re looking back at the Howitzer however. While the line had noble purposes, both the Molotov and Howitzer had fallen short of expectations. When I reviewed the Howitzer it started out sublime and quickly turned into a bit of a mess. With a muddled second half and strength that got to the point of unpleasantness, I put my last Howitzer away in hopes that some rest would help the cigar. So, without further ado, let’s see how it is smoking a little over a year later.

As I noted in the original review, the Howitzer’s 6 x 60 frame is beefy. The wrapper feels extremely nice and oily, which I only remember a slight oily sheen before. Whereas there was some give before, the cigar is quite firm now bordering on hard. I did note how tight the bands were previously, where now they are quite loose. The aroma off the wrapper lost a little missing the previous cinnamon notes, but the brown sugar and barnyard aroma is still there. That interestingly unique raisin bread toast note still dominates the cold draw with touches of pepper on the lips and tongue.

Lighting the Howitzer was significantly easier and quicker this time with Prometheus triple flame lighter. The first few draws weren’t nearly as complex and delicious as I remember, but I still am getting good amount of spice – mostly nutmeg and hazelnut – with an overall creamy profile with a touch of sweetness. An inch into the cigar and the burn line is razor sharp with a very dense light grey ash holding on quite solid. Noticeably missing is any strength or pepper that seemed to be so prominent a year ago. 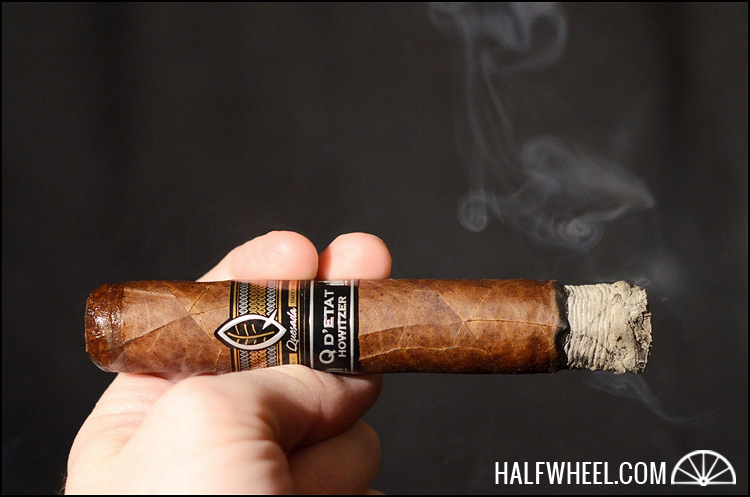 About halfway through the burn is fairly even still but has gotten slightly wavy. The profile is still mostly earthy with some spice, though it has become slightly muddled and not as distinct and some slight bitter notes give the whole thing a bit of bite. Towards the end of the cigar, the strength is still a medium at most, though the harshness I remember has still grown to the point where it’s drowning out any other enjoyable flavors.

I had high hopes that some rest would bring the harsh overtones and strength down to manageable levels. Unfortunately that wasn't entirely the case. The overwhelming strength and pepper that I noted in the original review was missing completely, but the profile was still almost one dimensional throughout the entire cigar and harsh, bitter overtones drowned out what parts of the cigar were enjoyable. I normally enjoy most Quesada cigars that are released, but this blend just doesn't hit home for me.