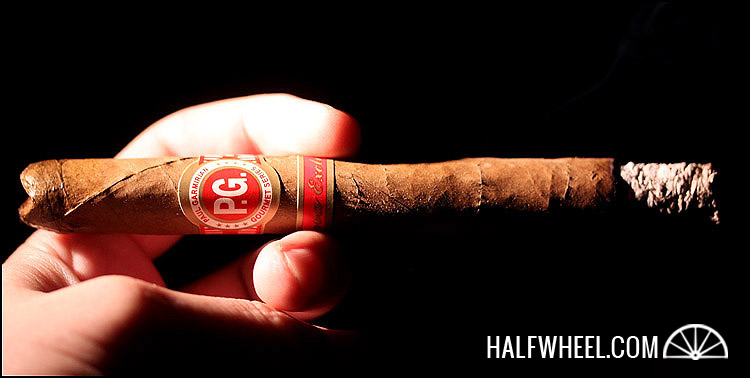 Today is the first review of our Monday morning tradition at halfwheel, redux reviews. For more info about redux reviews and all of other review types, click here.

Today’s redux review is of a cigar that was part of Lancero50 and was the series’ largest surprise, the Paul Garmirian Reserva Exclusiva Gran Panatela.

The place to start is probably his book, The Gourmet Guide to Cigars, which was published in 1990. Later that year, he introduced his first line of cigars at Georgetown Tobacco, a tobacconist he had long been associated with, and in 1991, the TABADOM-made cigars were released nationally in six sizes. The Reserva Exclusiva line was introduced in 2001, made like the every other Paul Garmirian cigar by Henke Kelner and Eladio Diaz. The big selling point is ten-year old tobacco, something Garmirian has grown a reputation for. All PG Cigars are aged for a minimum of a year after rolling and most feature fairly aged tobaccos. What’s a bit surprising is that the price of the Reserva Exclusiva line is identical in price to Garmirian’s core line, the Gourmet Series.

This is one of two Lanceros offered by Paul Garmirian, the other being the Paul Garmirian Gourmet No. 1, a true El Laguito No. 1, as opposed to this Gran Pantela, which is slightly thicker at 7 1/2 x 40.

This example comes from the same box as the cigar back in June. Much like the original example, the wrapper is still not the cleanest of cigars and there’s still a slight box-press. And like the cigar from June, it’s once again a mixture of new flavors—this time sweet cocoa, cinnamon, lots of sweetness and a bit of an AGANORSA-like mix of sweet cocoa and pepper—but still full and complex. Cold draws feature a bit of red wine and meatiness, but other than that looks much like my notes from the early summer.

The actual smoking experience is not much different than six months and three days ago. It begins with nuttiness over earth, caramel and other sweetness. Midway through the PG exhibits earth, cedar, but still the flavor is dominated by a nuttiness. By the end of the final third, a similar array of oaks, cocoa, coffee and fruits join the nuttiness. The Dominican-made thicker rendition of the classic lancero is full, smooth and complex in flavor and is mild in strength.

Despite what the picture below shows, construction is pretty good, until I remove the secondary band which destroys the wrapper. 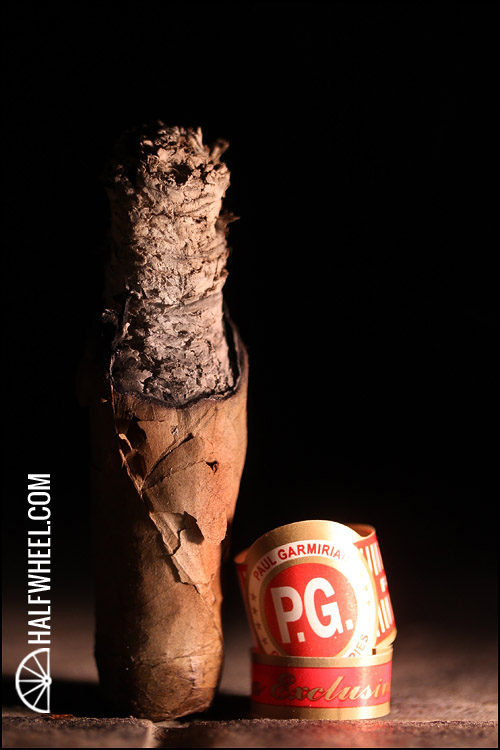 I've been mainly smoking Cubans for the past week and a half and while it would be hard to mistake this for one of Havana's finest, with a bit of twang it would be a much different story. The Paul Garmirian Reserva Exclusiva Gran Panatela is one of the best non-Cuban lanceros on the market and I still regret not smoking more of these. As to the cigar not changing, it's not terribly expected as Paul Garmirian ages a lot of his cigars for long periods of time, like the Reserva Exclusiva. It's not a cigar that is going to make the Litto Gomez fans of the world too happy, but if you are looking for tons of flavor and complexity in a fully finished and smooth cigar, the PG is in a category all by itself, and no, this is not a Macanudo.